The first release in the Blender 2.9 release series is here. Take our guided tour of its key features

The industry-changing Blender 2.8 releases may finally be over, but the pace of development hasn't slowed. With the Blender Development Fund now bringing in enough money to pay the salaries of 20 full-time developers, this year's Blender 2.9 release cycle looks set to be equally packed.

Blender 2.90, the first of those updates, consolidates many of the new features, extending the software's modeling, rendering and simulation toolsets. Below, we've picked out five of the most significant changes, from a true multiresolution sculpting workflow to advances in cloth and fluids. 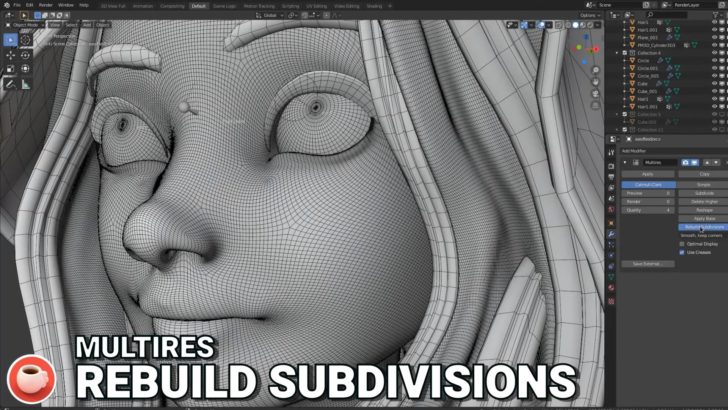 Blender's Multires modifer can now automatically rebuild missing subdivision levels when importing high-res models from other 3D software, making it possible to work on them as if they were native Blender assets.

Blender has supported multiresolution modeling for a while – the Multires modifier got a big update in Blender 2.83 – but it never quite added up to a proper sculpting workflow. Blender 2.90 joins those dots.

It is now possible to swap between subdivision levels as you work, starting at a low level to rough out major features, then switching to a higher one to add fine details. Blender can also unsubdivide the mesh, so you can fix any structural problems you notice after starting to detail it, and even to rebuild subdivision levels completely, making it possible to import hi-res assets from other DCC software, and have Blender automatically reconstruct all of the missing subdivision levels for you.

There are also now three subdivision modes: the standard Smooth mode, plus the blockier Simple and Linear subdivision, making it possible to sculpt anything from organic characters to hard surface assets

Intel's AI-based Open Image Denoise (OIDN) system is now supported for viewport rendering as well as final-quality output, making it possible to denoise your viewport previews on the CPU as well as the GPU.

Second, Intel's CPU-based Open Image Denoise system, first introduced in Blender 2.81, can now be used to denoise viewport previews as well as final-quality renders. Both changes will be particularly significant for Mac users, since Blender now officically no longer supports GPU rendering on macOS, following Apple's decision to discontinue support for its CUDA drivers in macOS 10.14.

But for Windows and Linux users, GPU rendering has been extended. The OptiX ray tracing backend added in Blender 2.81 is now available to any GPU that supports the API – which includes cards as old as the GeForce 700 series – while support for NVLink means that it is possible to pool memory between pairs of newer NVIDIA cards, enabling you to render much larger scenes on the GPU.

New sky models are very much the flavor of the month in CG. While OctaneRender and LightWave have just adopted the Hosek-Wilkie model to simulate the light cast by the daytime sky, other apps, like V-Ray, Corona Renderer, and now Blender, are moving away from it in favor of even more realistic alternatives.

Blender 2.90's new Nishita sky texture accounts for the way that sunlight is absorbed by ozone in the atmosphere, and changes in light scattering at different altitudes. It should generate more realistic lighting for exterior scenes at any time of day, but the changes are most noticeable when the sun is near the horizon, with the base of the sun's disk darkening properly, and a realistic glow along the horizon.

EEVEE, Blender's real-time render engine, now supports deformation motion blur as well as camera motion blur: a crucial feature for studios hoping to use it in production for visual effects or animation work.

Although many people think of EEVEE, Blender's real-time render engine. as a tool for tests and personal projects, it just took another step towards becoming something that studios use in production. In Blender 2.90, EEVEE supports motion blur: not just camera blur, but blur due to mesh deformation. It works with particles and hair, and supports sub-frame accumulation for more accurate results.

Blender 2.90 adds new tools for recreating fabric and fluids, from this Cloth Filter to better simulation caching and support for spray maps in the Ocean Modifier. You could almost call it a raft of new features...

Blender 2.90 also features a lot of new features for recreating cloth and fluids. The Cloth Filter, shown in the video above, applies the same solver used by the Cloth Brush to an entire mesh, making it behave like fabric, while full cloth simulations can now mimic the effects of hydrostatic pressure: either that of surrounding fluids, or the internal pressure of balloons and other inflatables.

Fluid simulations themselves benefit from improved caching: by default, simulations are now cached in VDB format, with a single .vdb file per frame, making Blender more compatible with other visual effects tools, and it is now possible to apply a frame offset when importing caches from other software.

Blender's Ocean Modifier, which provides a less CPU-straining way to recreate large bodies of water, has also been updated, and can now generate texture maps for spray as well as foam.

Blender's Pose Brush makes it easy to pose unrigged characters. In Blender 2.90, it gets an ingenious new Face Sets FK mode that treats the Face Sets of a model as if they were the joints of a forward kinematics rig.

And as usual, there are a host of handy smaller changes. Here are five other features that should improve your day-to-day workflow, from modeling and texturing right through to pipeline integration:

Blender 2.90 is available for Windows 7+, macOS 10.13+ and Linux. You can find full details of the hardware requirements on the Blender website. 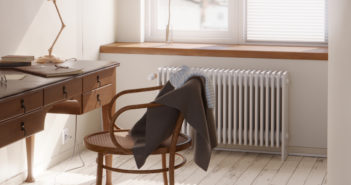 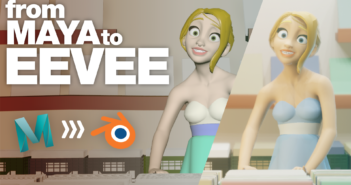 Next Article From Maya to EEVEE a mixed pipeline.