The longest-awaited – and, arguably, the most significant – release in Blender’s history has finally been released. Blender 2.80 is now available for download, bringing with it a new interface, a new core architecture for the software, a new render engine, a complete new 2D animation system, and scores of new features affecting everything from modeling to simulation.

To mark this milestone release, we’ve put together an overview of the five major changes in Blender 2.80, and picked out five lesser-known features that could change the way you work, plus some things that have actually been taken out. But first, a little history…

Over four years in the making

Blender 2.80 is, quite literally, the most-awaited release in Blender history. At one year, 10 months and 13 days since the last numbered version – but hey, who’s counting? – it represents the longest period in Blender’s history that the software has gone without a major update.

But the origins of Blender 2.80 actually lie even further back: all the way back in July 2015, in fact, when Blender Foundation chairman Ton Roosendaal proposed what he termed a “workflow release”: a chance to stop scrambling to add new features to the software and focus instead on larger, more structural, long-term development goals.

Looking back at that original proposal, it seems remarkably prescient, identifying many of what would become the key changes in Blender 2.80, including UI work, a new physically based viewport render engine and asset management and linking. Where it differs is in the proposed work on the Blender Game Engine – about which, more later – and in its assessment of the timescale: at the time, Ton thought it might mean a break of “9-12 months” after Blender 2.76, and ship some time in 2016. In reality, it would take three years longer: work made possible via crowd funding from the Blender Development Fund and last year’s Blender 2.8 Code Quest.

The Blender 2.80 documentation lists seven major areas of development, each comprising scores of changes, plus over 30 smaller new features. So which ones should you focus on? The answer depends on how you use the software, but for most people, a good starting point would be the highlights chosen by Blender Institute artist Pablo Vazquez – a key contributor to the Institute’s open movies from 2011’s Sintel onwards – at the time of last year’s beta release.

In his video rundown, Pablo identified five key changes in Blender 2.80: improvements to the UI and UX, the updates to the viewport, the new 2D animation pipeline, Collections and view layers, and the changes to the Cycles renderer. Let’s look at each of them, starting with the most visible. 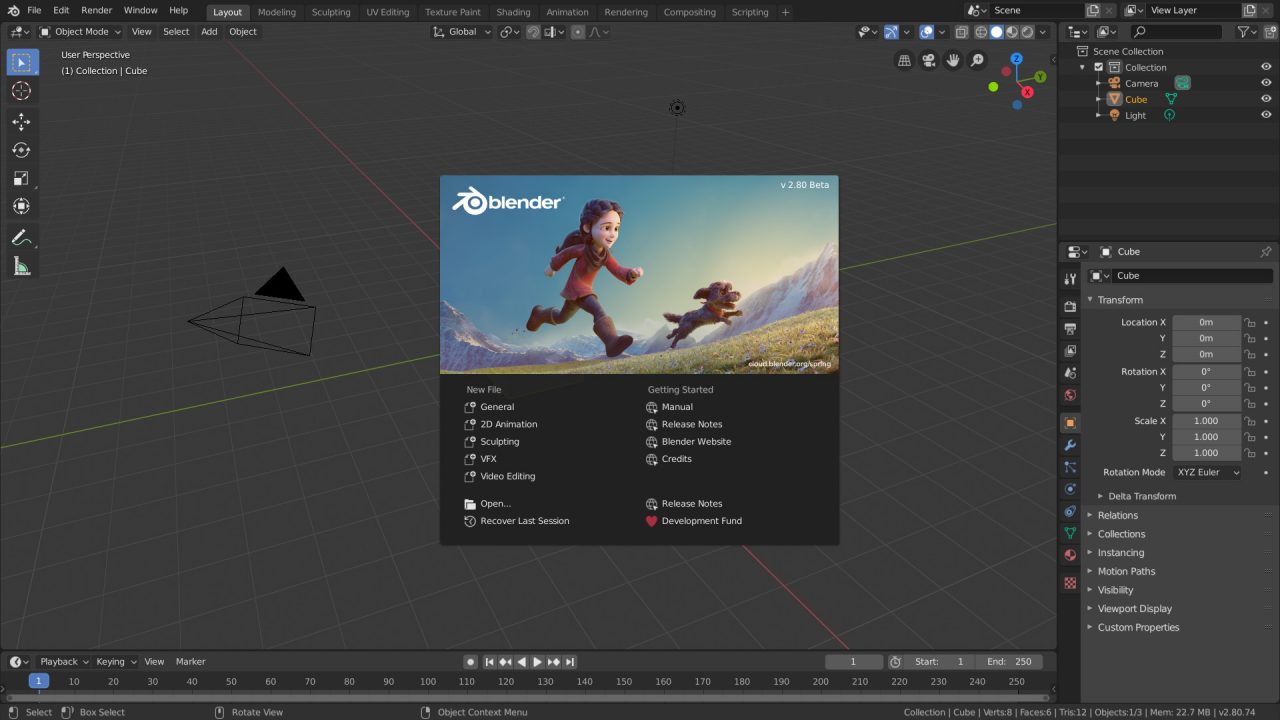 Blender’s interface has always been a point of contention for artists coming to the software from other 3D applications – and often, for the Blender user community itself. The 2.80 release makes Blender look and act much more like other DCC software, adopting industry conventions like a dark UI theme, flat icon design, and left-click being the default way to select objects.

The number of shortcut keys assigned by default has been reduced – there’s also an alternative ‘industry compatible’ keymap that brings the key bindings in line with other applications – with the interface itself becoming more contextual, gaining a context menu, a user-customisable Quick Favorites menu, and a new set of pie menus of the type used in Maya and Houdini, all intended to reduce the number of clicks needed to get to the tool you actually want to use.

Blender 2.80 also increases the proportion of the screen devoted to the scene you’re working on, replacing the space-hungry Header and Tool Shelf to the left of the 3D viewport with a slimline vertical toolbar, and rationalizing the Properties Editor into a single-column layout.

In addition, the update extends Blender’s system of Workspaces, accessible via tabs at the top of the UI, which adapt the layout of the interface to particular workflow tasks: the Modeling and Sculpting workspaces maximize the space devoted to the 3D viewport, for example, while the Animation and Compositing workspaces introduce a timeline along the foot of the screen. On creating a new file, it is also possible to choose from one of five templates that customize the interface to more specialized workflows, including 2D animation, VFX and video editing.

Ever since work on Blender 2.80 began, one of its most-talked-about features has been Eevee, the new physically based real-time render engine that powers the new 3D viewport. (It also works as a final-frame renderer as an alternative to Cycles, with which it shares shader nodes.)

Designed along similar principles to game engines, including the use of precomputed light probes to make it possible to display global illumination effects in real time, Eevee builds on the Principled BSDF shader introduced in Blender 2.79. Based on Disney’s 'principled' model – which also inspired Unreal Engine's PBR material system – this layered shader enables users to mimic a wide range of real-world materials by adjusting a small, fairly intuitive set of parameters.

Eevee can render volumetrics natively, and while it doesn’t do real-time ray tracing – something that has only started to appear in commercial game engines in the past few months – it uses screen space information to approximate many of the same effects, including ambient occlusion and subsurface scattering, with motion blur and depth of field then applied as post effects.

Being based on OpenGL, Eevee is operating system and hardware-agnostic – so it should work with most GPUs released in the past 10 years – and despite a few missing features, it outdoes most commercial apps when it comes to the visual quality of the viewport display.

And while they haven’t generated as many posts on social media as Eevee, there are other changes to the viewport, too, including the new Workbench render engine, which powers the wireframe and flat-shaded displays, and which is intended for tasks that really grind renderers to a halt, like scene layout for VFX or feature animation; and a handy set of viewport overlays, which show additional scene information, and which also work with Cycles and Eevee render previews.

Another feature added early on in development is the new 2D animation toolset. Building on work begun in back Blender 2.73, the release transforms Grease Pencil from a simple tool for annotating animation to a complete animation system in its own right. Rather than being simple strokes, Grease Pencil assets are now fully fledged Blender objects, making it possible to organize them in layers, apply materials and lighting, and even sculpt or deform them in a similar way to 3D meshes. It’s also possible to assign effects like shadows, rim lights and glows.

As far as we’re aware, a 2D animation toolset of this complexity integrated inside a 3D application is unique to Blender, and Grease Pencil has already been tested in production: the toolset was used on Blender Cloud-funded open short Hero last year, to striking effect.

Blender 2.80 replaces the old system of 3D layers with Collections. See how they work here.

One of the original goals of Blender 2.80 was to improve the way that the software handles the very large scenes generated in visual effects production or feature animation. One way to keep file sizes down – and to enable multiple artists to work on a shot in parallel – is to reference assets stored in external files, rather than keeping all of the data in a single, monolithic scene file.

To do that, Blender 2.80 replaces the software’s old system of 3D layers and layer groups with Collections, used to organise objects in a scene, instance groups of objects, and link groups across .blend files. The old system of render layers has also been expanded into a new system of View Layers, making it possible to create multiple versions of a scene during look development or shot layout, as well as to split a render into multiple layers for compositing. 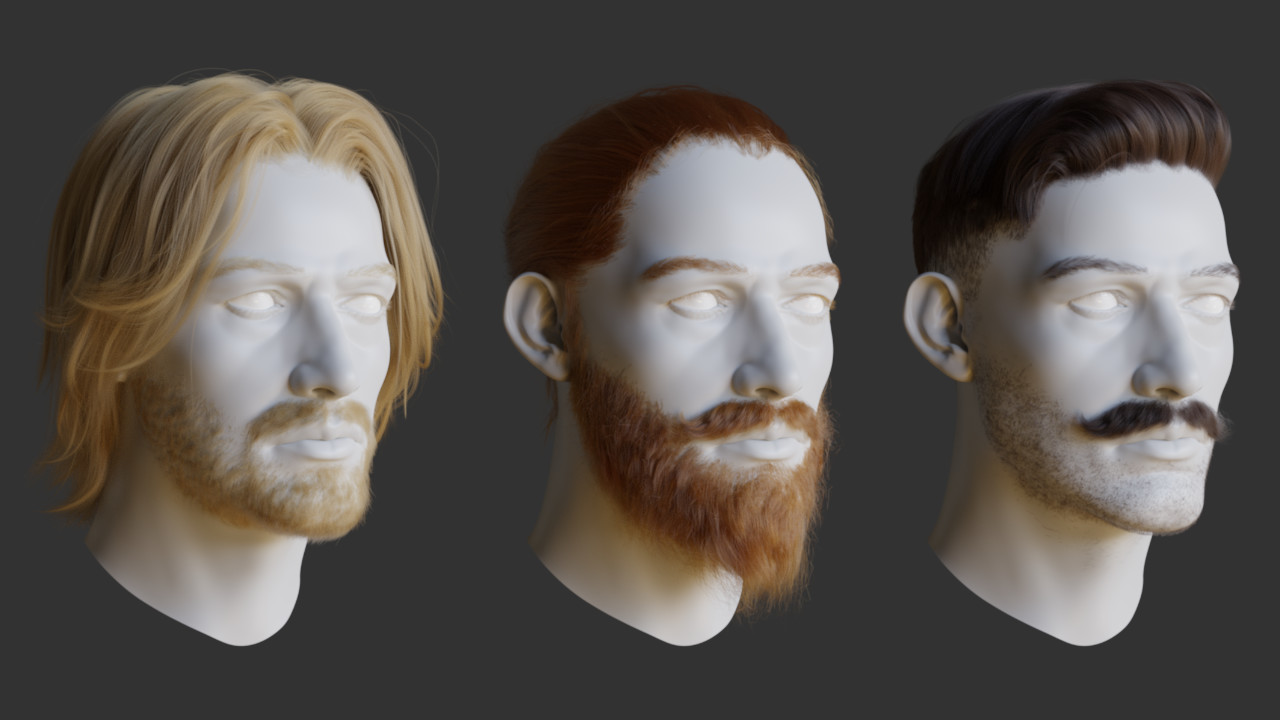 Highlight #5: The new features in Cycles

Although Eevee has been getting most of the attention, the Cycles renderer also has a number of significant new features, including the new Principled Hair and Principled Volume shaders. Like Principled BSDF, they’re intended to enable users to mimic the widest possible range of real-world effects with the smallest possible number of control parameters; and again, the Principled Hair shader is based on work done at Disney: in this case, for fur shading on Zootopia.

Blender 2.80 also introduces support for Cryptomatte, the automated ID matte generation system developed by Psyop, and integrated into pretty much every major VFX tool since being made open-source in 2017; plus Random Walk Subsurface Scattering, a newer method of generating the subsurface effects that give materials like skin, marble and wax their unique look, recently implemented in commercial renderers like Arnold. The update also introduces a new Bevel shader node, which creates the look of rounded edges on a model as a render-time effect, rather than by modifying the underlying geometry: useful in concept design. This thread on Polycount suggests that the results rival that of the rounded edge shader in Modo, widely regarded as the best existing implementation of this concept.

Five hidden features that could change the way you work...

So much for the headline changes. What of the other new features in Blender 2.80? Although pretty much every toolset has been improved, from modeling to cloth simulation, there are also a number of less visible under-the-hood changes that could make a big difference to the way you work, particularly if you work with large scenes, or if you use Blender inside a production pipeline.

And two things that have been removed entirely

But as well as adding new features, Blender 2.80 also removes existing functionality. Given that it has now been superseded by Eevee, it isn’t a great surprise that the old Blender Internal render engine has now been deprecated. Ton Roosendaal made the relevant commit last year with the parting message, “Bye bye, you did great!”.

Blender 2.80 deprecates the native Blender Game Engine in favour of open-source alternatives like Godot, currently being used on a range of console, desktop and mobile titles.

What was more unexpected was that the Blender Game Engine – one of the development priorities identified in the original Blender 2.80 project proposal – was removed two days earlier, itself rendered obsolete by the increasing popularity of free-to-use closed-source engines like Unity, Unreal Engine and Lumberyard. BGE lives on in the UPBGE code fork, but the Blender 2.80 documentation officially recommends Godot as a “more powerful open-source alternative”.

It’s also worth noting that Blender 2.80 is an API-breaking release, meaning that add-ons need to be updated before they will work with it. Many have already been updated: you can find community-compiled lists of compatible tools on BlenderArtists.org and Blender Addons. 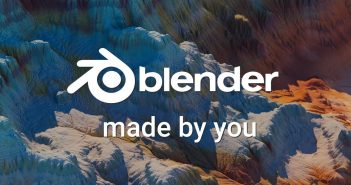