For the past year, Blender has been going through the most significant set of updates in the software's 20-year history. Blender 2.80 gave it a new core architecture, new interface, and a revolutionary new real-time render engine; Blender 2.81 added hardware-accelerated ray tracing and new sculpting tools; and Blender 2.82 threw in a new fluid simulation system and support for key VFX industry standards.

Today's release of Blender 2.83 brings that update cycle to a close. The first release in Blender's new Long-Term Support (LTS) program, it will continue to receive critical fixes until 2022, making it easier for big firms that have adopted Blender, like Ubisoft Animation Studio, to commit to it on major projects.

But the 2.83 update isn't simply about making Blender future-proof: it also brings with it its own set of new features, including VR support, OpenVDB import, and an eye-catching new cloth sculpting brush. Below, we've rounded up the key changes in the release.

Blender 2.83 marks the first milestone towards native virtual reality support, making it possible to view or navigate scenes in VR directly within the software. See the system in action from 02:00 in the video above.

Blender 2.83 brings with it native support for virtual reality. It is now possible to view your scene directly inside Blender using a VR headset, without the need for plug-ins like Blender XR.

At the minute, that's pretty much all you can do: you can view your scene in virtual reality, navigate around it, and set up an unlimited number of camera positions as waypoints, but you can't edit anything. However, even in its initial form, VR support provides new ways for directors to scout virtual sets, while being able to view assets at room scale opens up new workflows for look development.

The OpenXR standard on which the implementation is based is still very new – the 1.0 specification was released less than a year ago – so hardware support is still limited: for Windows users, there are fairly stable development previews for Windows Mixed Reality devices and Oculus Rift, but nothing for HTC Vive and Steam VR headsets yet; and if you're a Linux user, you will need the Monado runtime, which may mean compiling from source. As a result, the new VR add-on is disabled by default, although it's straighforward to set up: you can find a step-by-step guide here.

The new Volume Object makes it possible to import and render complex volumetric data generated in other DCC applications, like the OpenVDB volume above, taken from Walt Disney Animation Studio's cloud data set.

Although Blender has been able to cache simulations in the industry-standard OpenVDB format since Blender 2.77, until now, you couldn't actually import OpenVDB files generated in other software.

To improve interactivity, it is possible to display OpenVDB volumes in the viewport as wireframe bounding boxes, and only show the details when rendering, which can be done using Cycles – by default, it uses the Principled Volume shader – or AMD's free Radeon ProRender plugin.

At the minute, you can't import OpenVDB point data, or to render OpenVDB level sets, but support is planned for future releases, along with the power to control OpenVDB volumes with modifiers.

Sculpting tools developer Pablo Dobarro continues his amazing work in Blender 2.83. His most eye-catching contribution is the new Cloth Brush, whose built-in physics solver automatically generates realistic folds and wrinkles beneath the brush cursor. You can control the result by switching between the seven built-in deformation modes, or adjusting the mass and damping properties for the sim, and it's a lot of fun to use: this Chocofur video tutorial describes it as "magic", and who are we to disagree?

Other new sculpting features include the Clay Thumb brush, which is designed to mimic the way that real clay deforms around your fingers while modeling, and a lot of workflow improvements to existing tools: the Layer brush has been completely rewritten, and all of the existing brushes now have a separate normal and area radius, plus a new hardness property to control falloff.

The new Face Sets system keeps complex meshes organized as you sculpt and paint them, dividing their surfaces into color-coded regions that can be displayed or manipulated independently. Video: Jayanam

Another change to the sculpting toolset that deserves an entry in its own right is the Face Sets system. Like ZBrush's Polygroups, Face Sets divide the surface of a mesh into color-coded regions, and make it possible to control their visibility independently – for example, to hide the rest of the model when you want to focus on sculpting an individual part – or to mask the surface for sculpting or painting. Used in conjunction with the Pose Brush, they even provide a more precise way to pose unrigged characters.

You can create face sets by painting directly onto the surface of the mesh, then expanding or smoothing the boundary of the new region; or you can generate them automatically, following the existing features of the model like material boundaries, edge creases or UV seams.

Although workflow improvements aren't as headline-grabbing as new features, they often make the biggest difference to your daily life when using an application in production.

Right from the start, a key objective of the 2.83 release was to address a long-standing user request to speed up the Undo system: something that has now been done for Object and Pose mode, particularly when working in scenes with large numbers of objects.

Other changes in Blender 2.83 include AI-accelerated viewport denoising, better multi-resolution modeling, and a rework of the 2D animation tools. Read more about the changes to the Grease Pencil toolset here.

And as usual, there are a host of handy smaller changes. Here are five other features that should improve your day-to-day workflow, from modeling right through to rendering and editing video:

Blender 2.83 is available for Windows 7+, macOS 10.12+ and Linux. You can find full details of the hardware requirements on the Blender website. 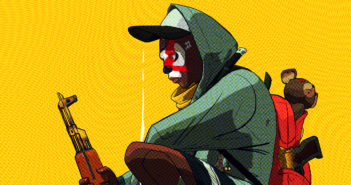 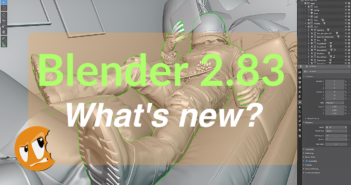 Next Article Everything you need to know about Blender 2.83 [promoted]