Hi, I am Satyaki from India, currently living in Germany. I have been using Blender since 2015, though I've been doing digital/3D art since 2013. I am a self-taught artist and currently, I am using Blender as my go-to modeling and rendering toolset in my workflow.

I stumbled upon this art challenge held by Atomhawk titled “Forgotten Creation.”

So, I started brainstorming ideas. At this stage, I thought of mixing 2 completely different timelines and cultures.

The first one was the Terracotta Temple of Bengal, India (I come from around this place.) 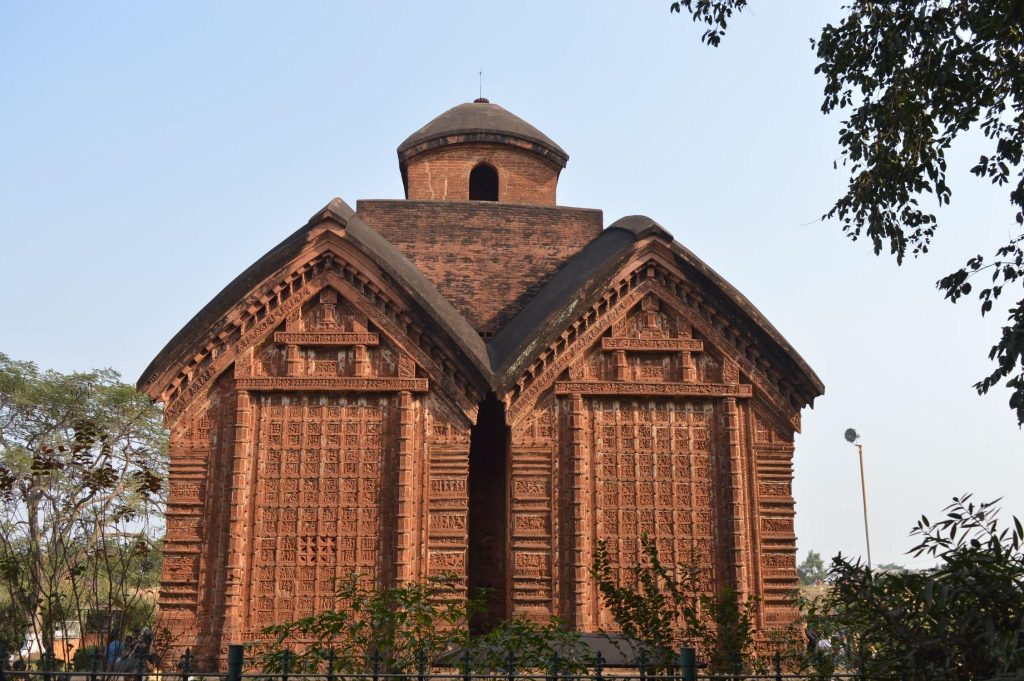 The other one was a cyberpunk. 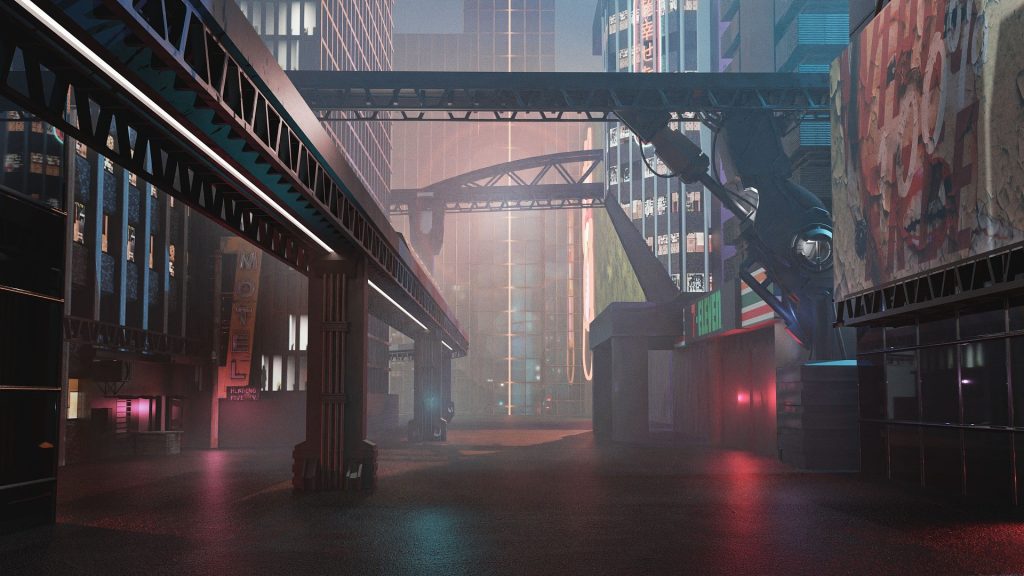 Now my main challenge was to mix these two completely different genres and tell a story in the final render.

I thought of a concept where humans dared to harness the power of an ancient energy or weapon, only to be destroyed by the same power. All that remains is the ruins.

I thought of a tropical forest as the base of the set design for this concept. 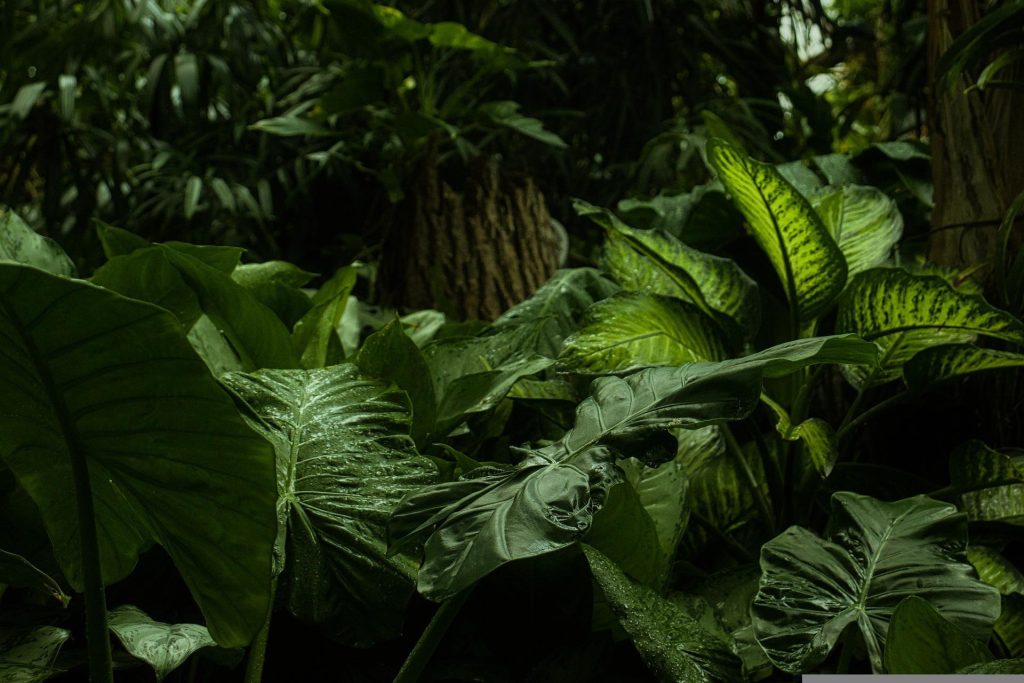 So, I started to brainstorm different ideas that fit the subject and collected references (a lot of them as usual).

Then I started with the concept designs. I used Clip Studio Paint as my drawing app for making the concept art.

I always start with building a visual library by sketching from references, and I try to understand the elements of the design language from the references. These are very rough, and I think it serves the purpose.

The below sketch was done to explore the cyberpunk element of the scene. 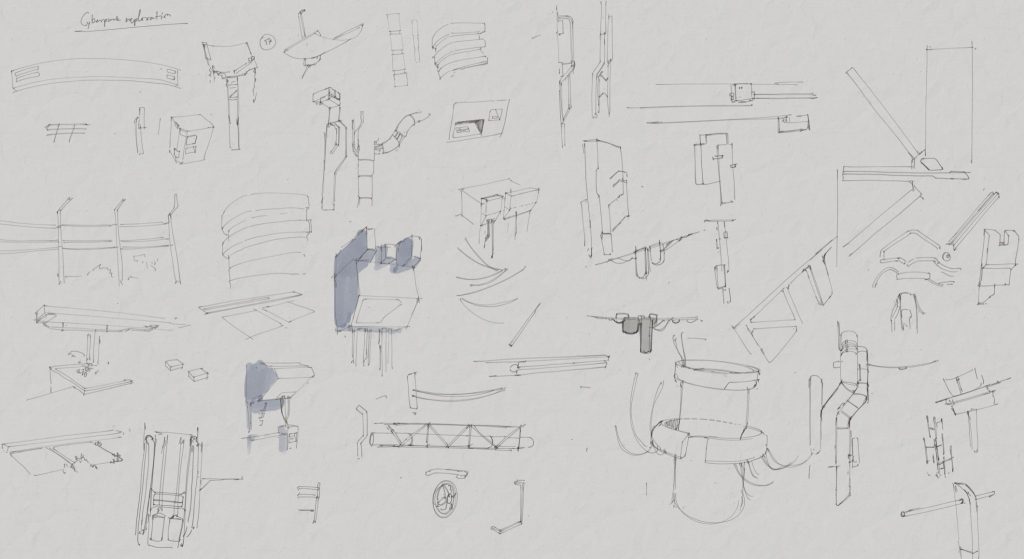 Next, I started with designing some small thumbnails on the composition of the whole scene in high contrast grayscale. This helped me stick to the plan for such a month-long project. Early planning was very important to finish this in time.

I chose one of them (out of the images with green dots) and made white-boxing in Blender. This was just a guideline of light and color value relationships. 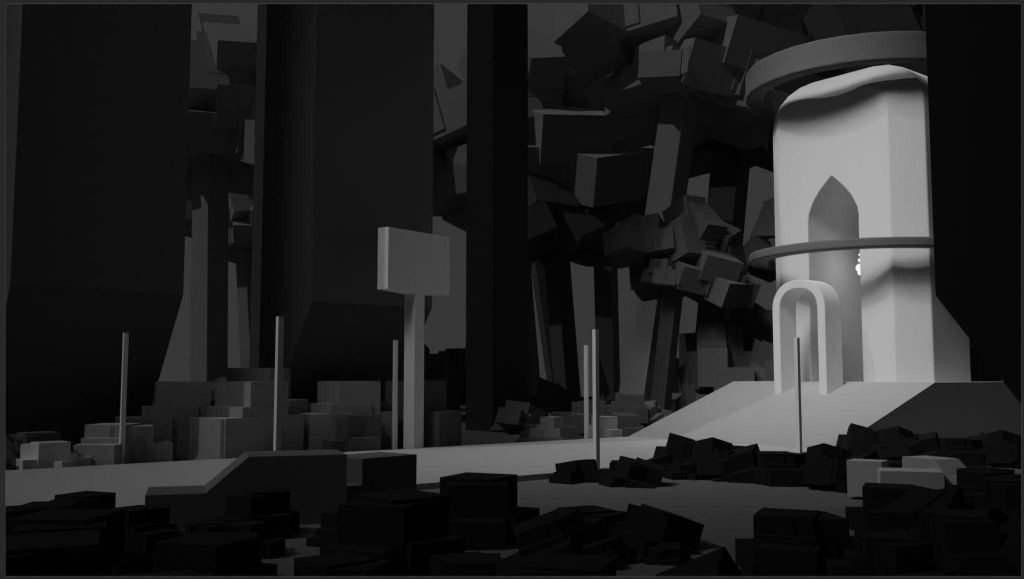 Since the temple is the center of attraction, I tackled it first.

I started with thumbnails, then a low poly base in Blender and a sketch-over on the screenshot of the low poly. The whole process is as below:

The control tower/communication radar/ power harness: I followed the same steps for designing the other props.

For all the other props, I straight up started with modeling and figured out the design on the go. I will get back to them later.

Below is the result of this exploration. I had not figured out the design of the props yet, therefore it was very rough and blocky. It just defines a guideline of color for the props. 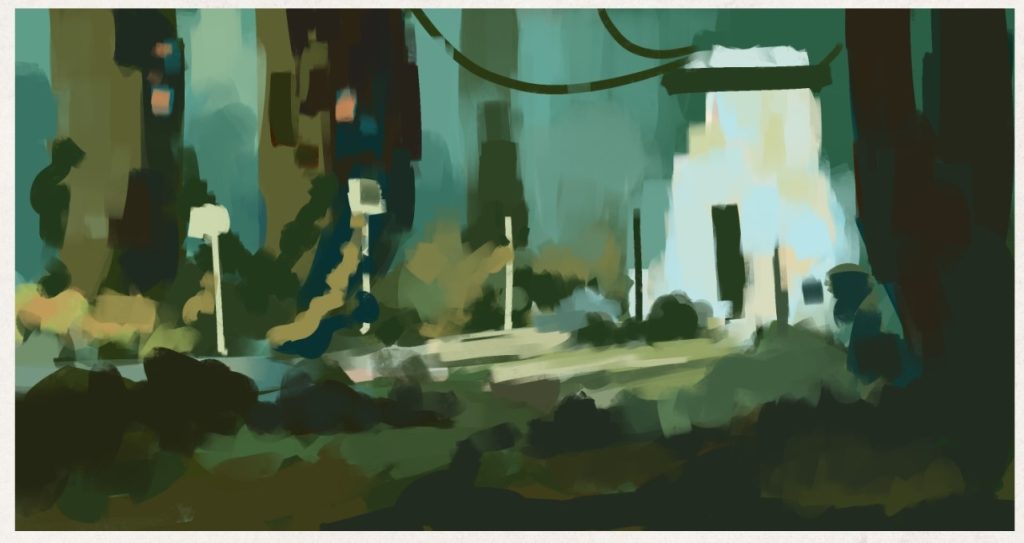 Now that the color scheme is set, I started with defining the colors of my props. Below are the colored concept designs of the props: 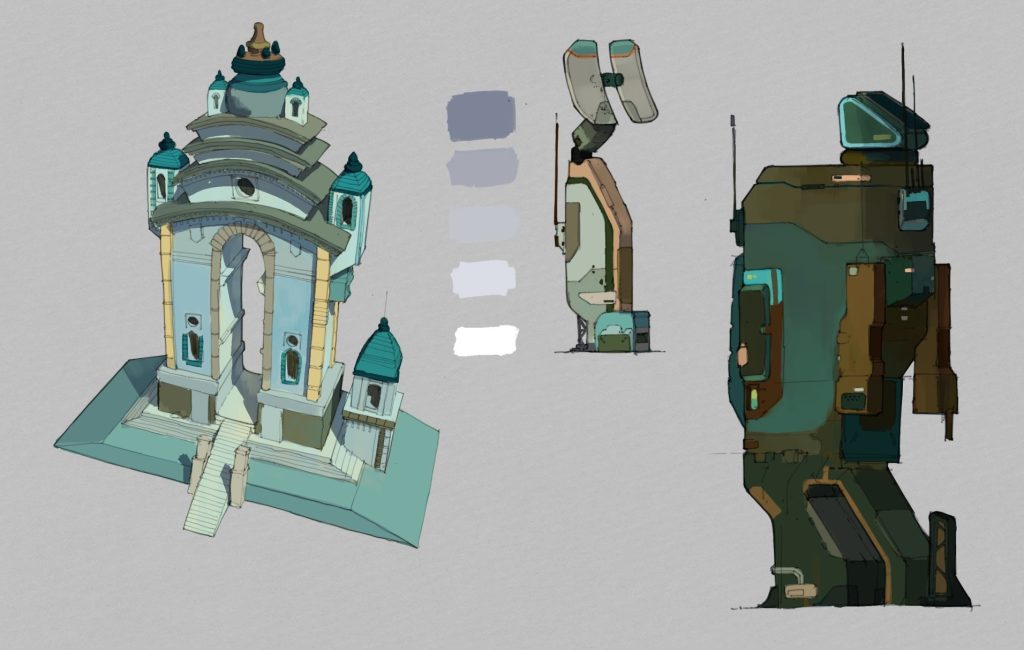 Figuring out color is very important for the project to stand out.

Boxcutter and Hardops were a big help here.

Also, I recommend Arrimus3D’s YouTube channel for general modeling tutorials. Even though he works mainly on 3Ds max, the knowledge is easily transferable to Blender. 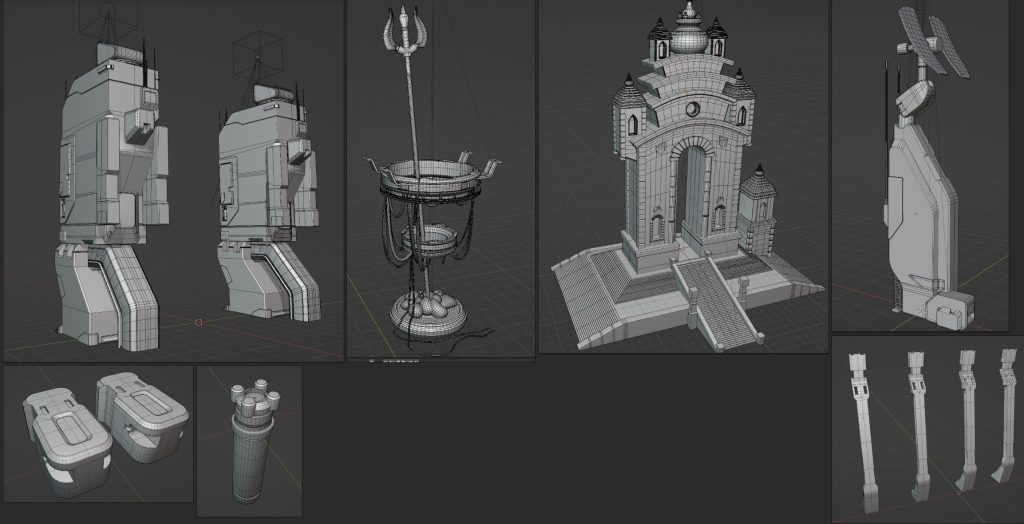 I use modifiers a lot during modeling, especially mirror, solidify, and array wherever applicable. It speeds up the modeling process.

I did not require to make my models subdivision friendly, so I skipped cleaning up the boolean mess for many of the props.

Making UVs for all of these assets is a time-consuming process. But without good UVs, the texturing would be very hard to manage.

TRIM SHEETS: While figuring out the visual library of these temples, I quickly realized that a trim sheet would be necessary to quickly add tertiary details for the models.

Generally, trim sheets are used for memory optimization. Here, I used it as a design palette. I made some quick visual library sketches for the details. 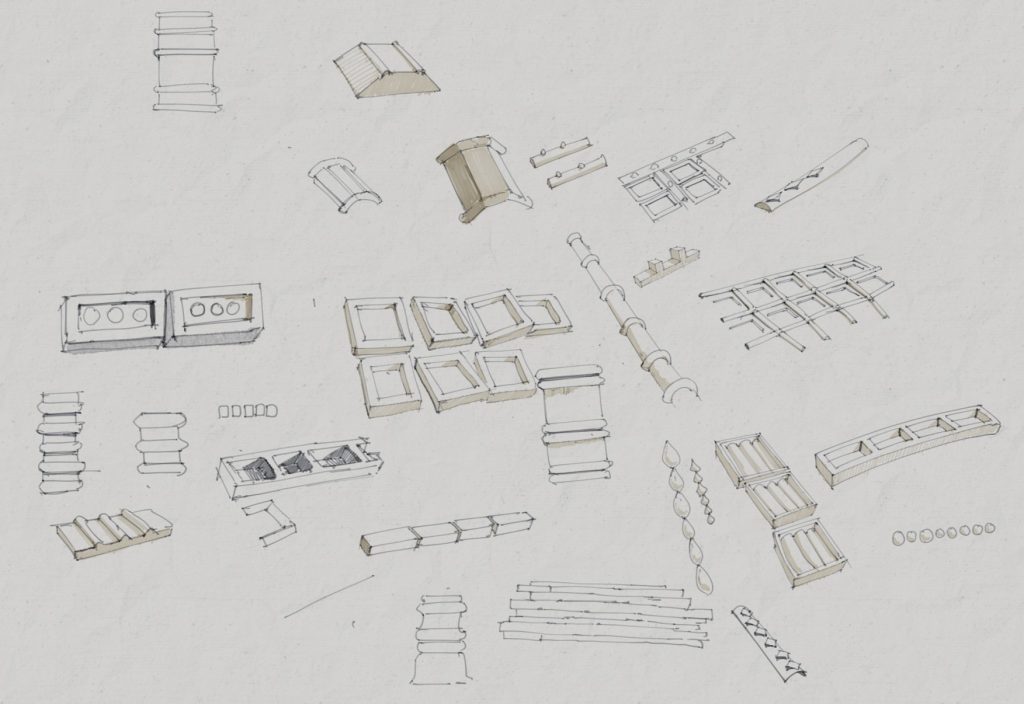 Then I fired up Substance 3D Designer, and started making the trim sheet. It was my first time making one, so trial and error took some time, but I finally got what I was looking for.

I made two of them; one for the temple and one for the sci-fi floor. Below are the trim sheets in substance designer:

TEXTURING IN SUBSTANCE PAINTER: Texturing is a very iterative process, and it takes time to figure out what looks best.

Anyways, I took my time and below are the results of it. 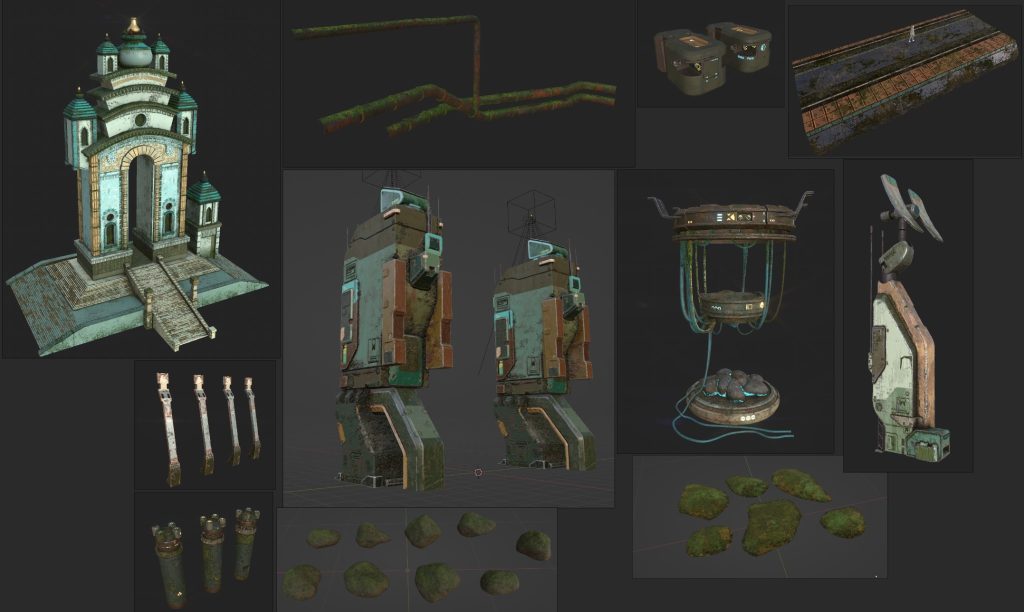 I used normal maps of the trim sheets on the temple and the layers were so many that it started to lag. So I had to export the textures and re-imported them into a new project in Substance Painter to continue the process.

After finishing up the shader setup for all the assets, it was time to integrate them all into a whole i.e the environment.

Using the whiteboxing as a guide, I placed my camera at the initial stage of the process. This is where I started placing the main assets into their places: 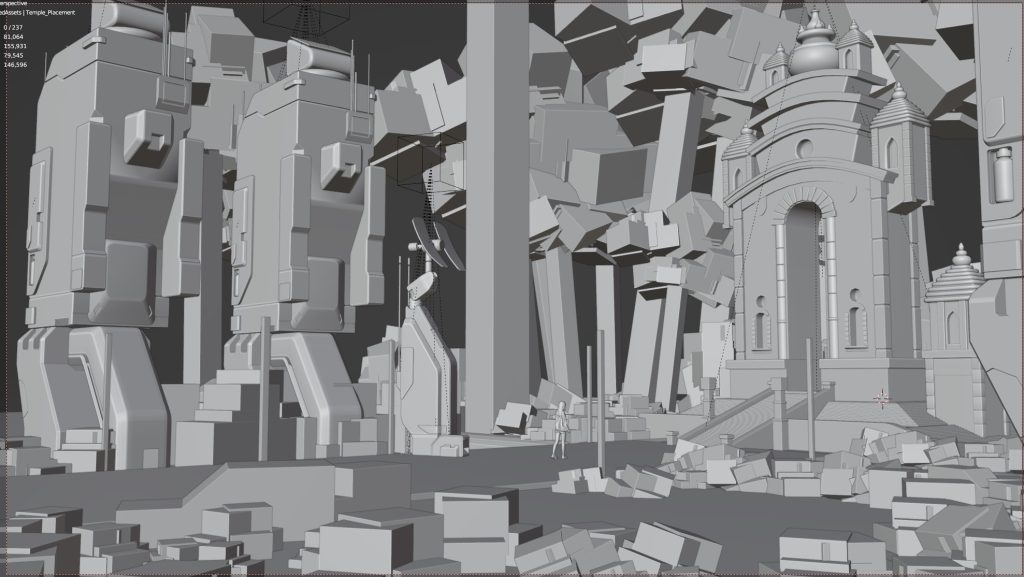 Foliages were the binding factor for this environment to look alive. Also, foliages are costly in terms of hardware/resources.

I used several paid add-ons for this.

I also imported some plant models from Polyhaven and used them as foreground elements.

After tweaking with all these amazing add-ons, I got this: 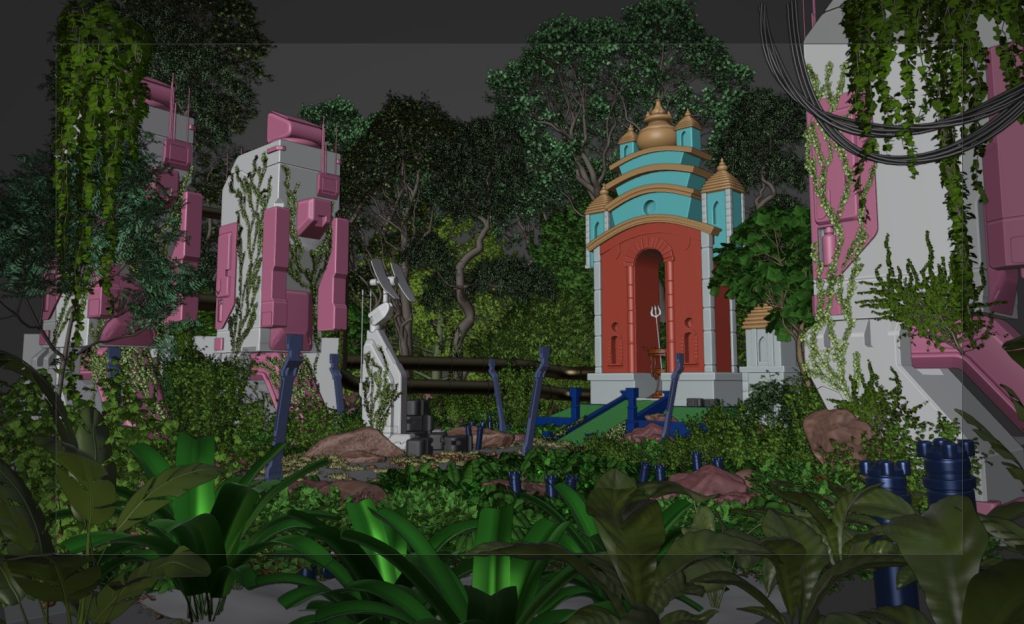 A set design with the foliage and assets.

In my opinion, lighting is the single thing that alone can make or break the final product.

I followed the thumbnail I made during block-out to design the lighting. 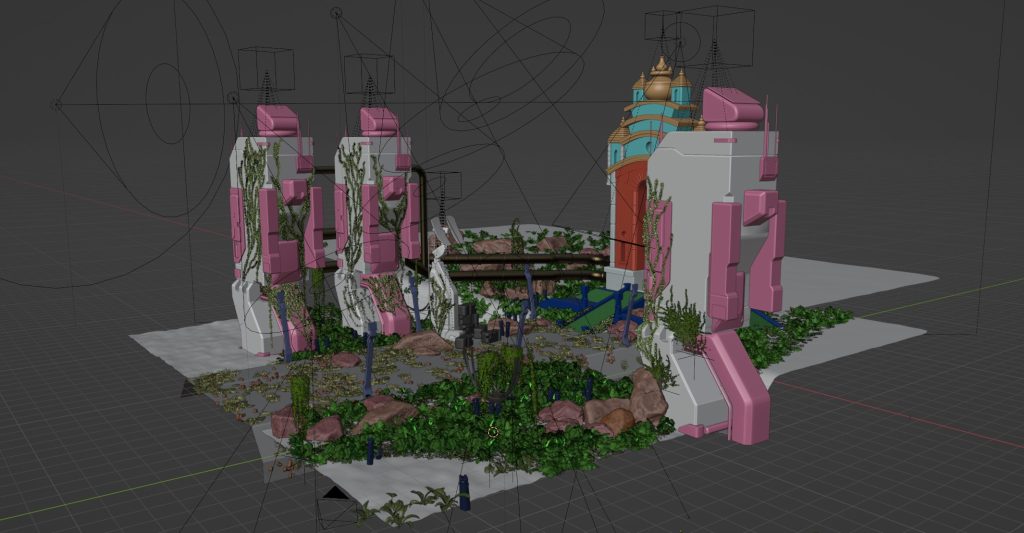 I started with an HDRI with 0.1 intensity; it’s just something for the shiny materials to reflect.

I used an image of a jungle for the distant background of the environment. Here I started the light with just the HDR and a Backdrop. 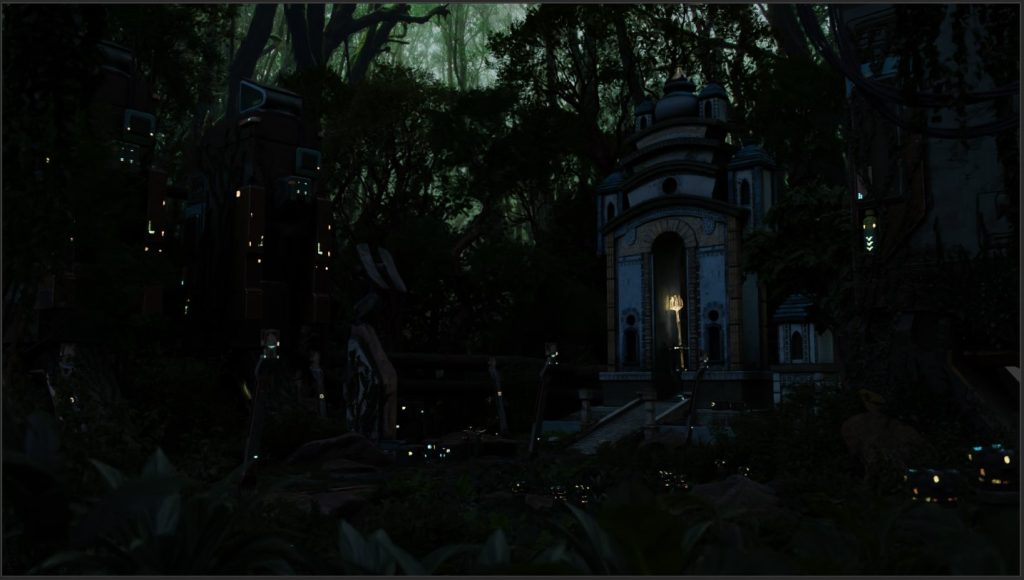 It started like this. Then I added 3 Spot lights for the Temple, some lights to make the nearby vines translucent. I used some light for the contour of the towers.

I additionally added a sun with a blocker just for the road. Below are the lighting without volumetric,

It’s a good start. But environments don’t look realistic without an atmosphere.

So I added 2 cubes (one in front, and the other in the distance) with a volume shader and placed it in front of the camera and made sure it covered my whole visibility.

I also added some 2D planes as cloud texture to add some mist to the environment. 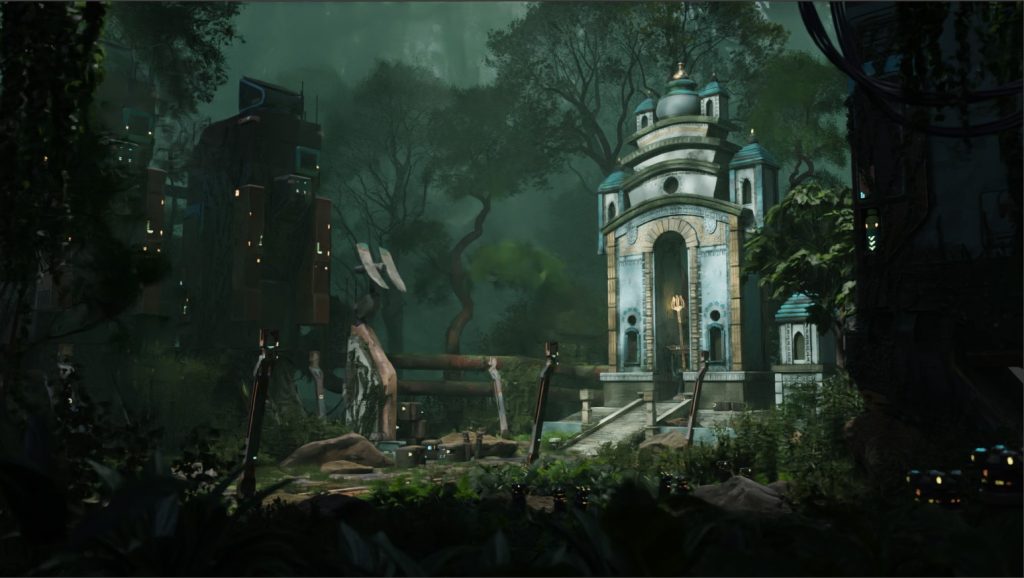 Now that my image was finalized, I started working with Blender's compositor.

This time, I wanted to explore the color correction/color balance too. For that, I wholeheartedly recommend Chocofur’s YouTube course regarding this. I learned to use scopes too from that tutorial.

This is the end result after post production in Blender: 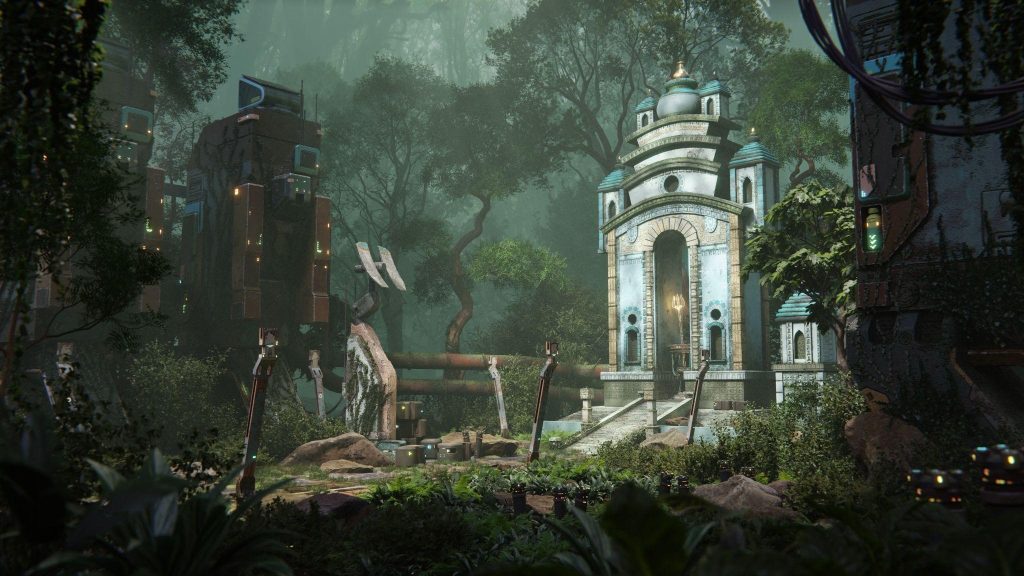 Then I did some little brushing in the opening of the windows. 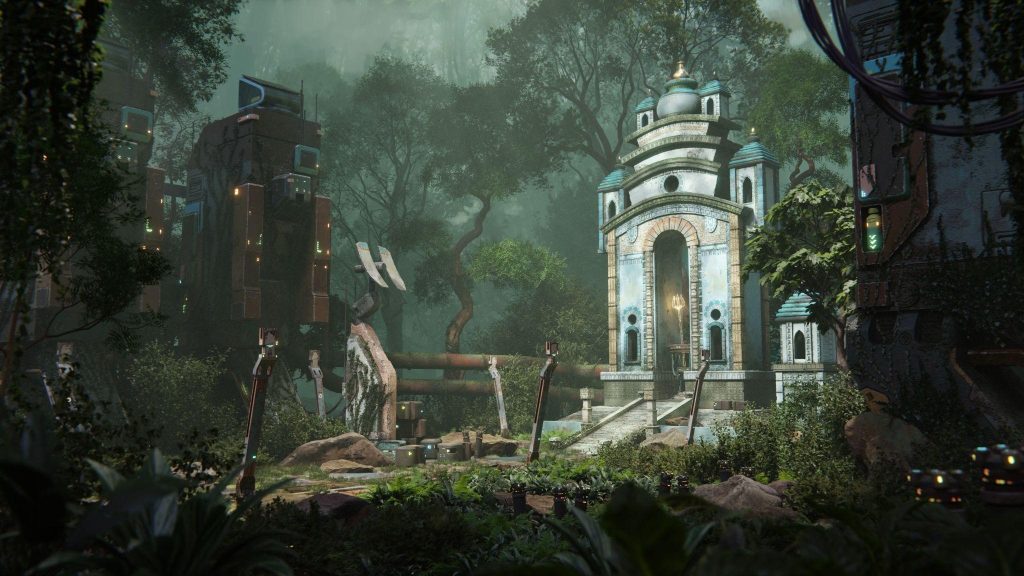 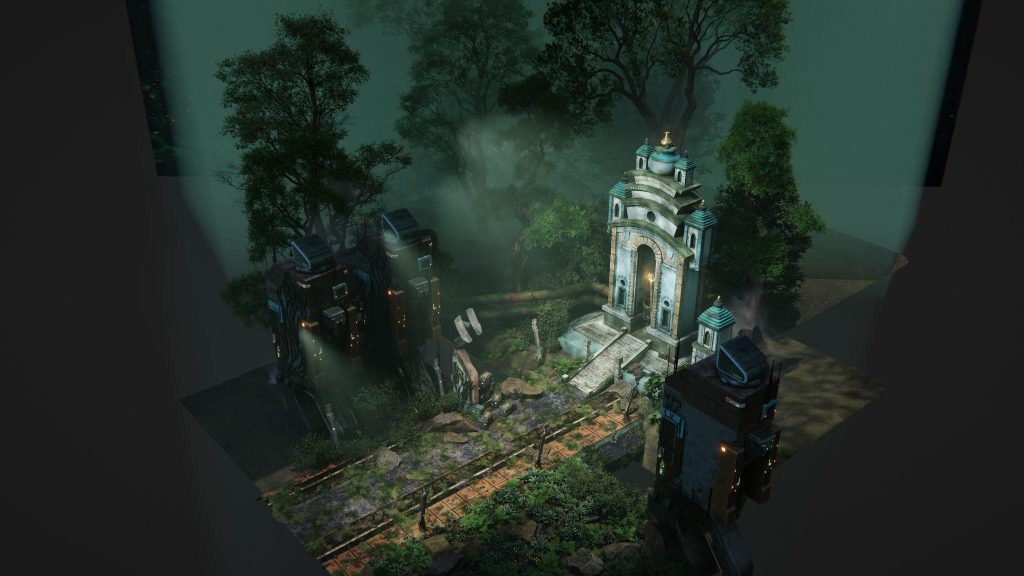 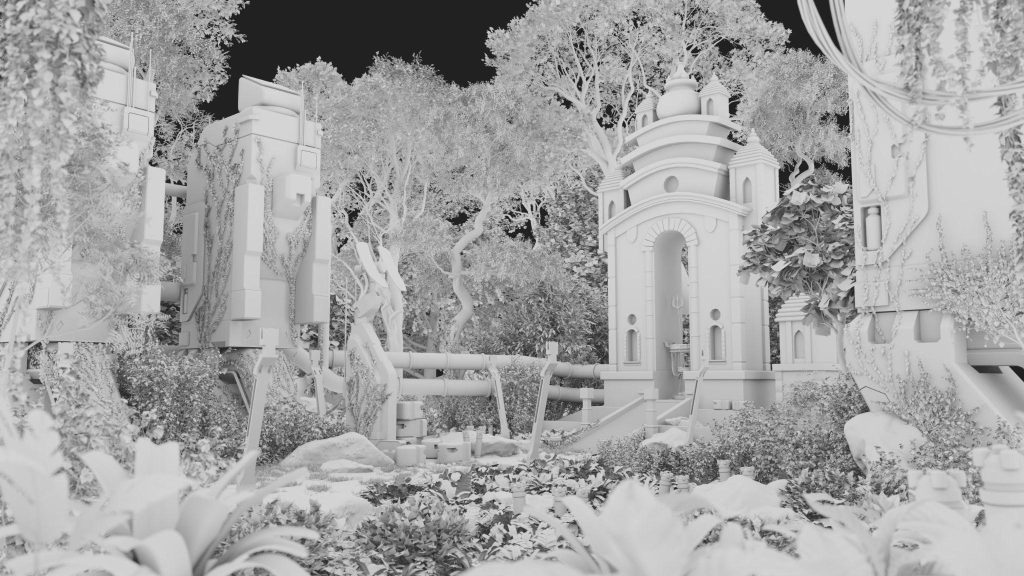 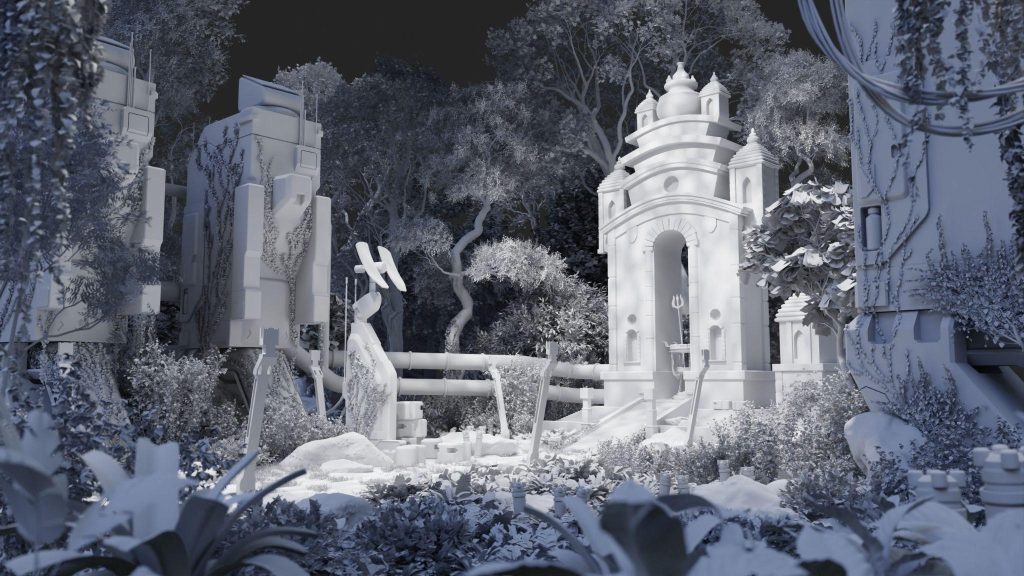 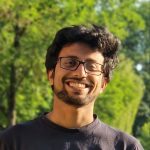 Satyaki Mandal, a 3D artist from Germany. He is currently pursuing a career in the field of game art. 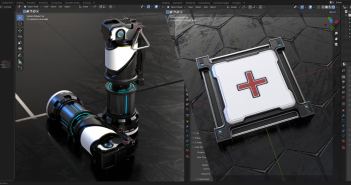 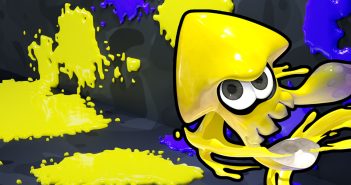 Next Article Splatters with geometry nodes