There is nothing I enjoy doing more than working on the design of 3D landscapes. Over the years I have made many of them, some works coming out better than others. The charm of shaping is the magic that comes into play. You start out with nothing and after a few weeks, you will have a creation that seems to have a life of its own, filled with mystery. This creative process makes it a pleasure to start something new. Every work has its own story, and every story is unique.

The development of 'Behind the gates' actually started years ago, in 2001 to be precise. In an old catalog I found a sketch/drawing of an old entrance gate to the city I lived in at the time. From the start, I was amazed by the sight of this. Nature and architecture seemed to go hand in hand, making it a beautiful sight. Years later I read in a newspaper report that excavations had been made and that a piece of defensive wall had been uncovered. This was the moment that I started shaping the scene with my early 3D Blender knowledge. 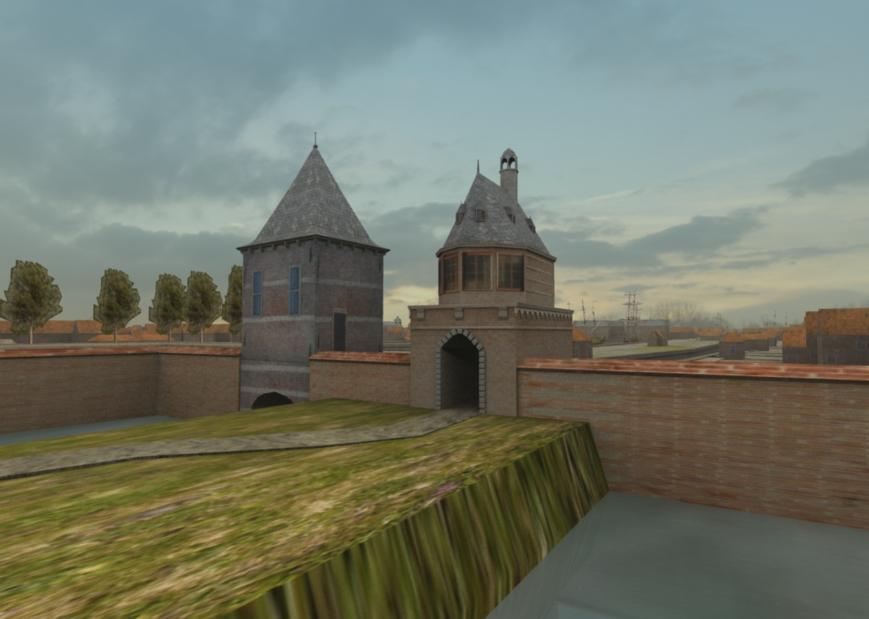 It was one of my first 3D creations, and it was around the year 2007 that I had been working on this scene. It was a typical chaotic construction, of which I would end up making many more. Driven by wonder, I made one work after another, but they never really impressed my imagination.

It wasn't until years later, sometime in 2017, that I read a newspaper article stating that part of the old entrance gate had been excavated. Not a piece of wall, but the entire foundation. I immediately went there and in a large hole lay the remains of the old gate. What feels like rubble to some is sometimes a missing puzzle piece for me. I couldn't get the gate out of my head and soon started redesigning the scene. I visited a number of locations for inspiration and researched all the available material. My efforts were a lot more thorough than in 2007. I also found a land registry map with the exact location of the gate with surrounding buildings.

In terms of technology, I was in a transition period. It concerned mainly outdated textures, but because I had already worked with them so much, it was no problem to shape the scene. It was also a period where I started making photo scans. You can clearly see the influence of this in my work. 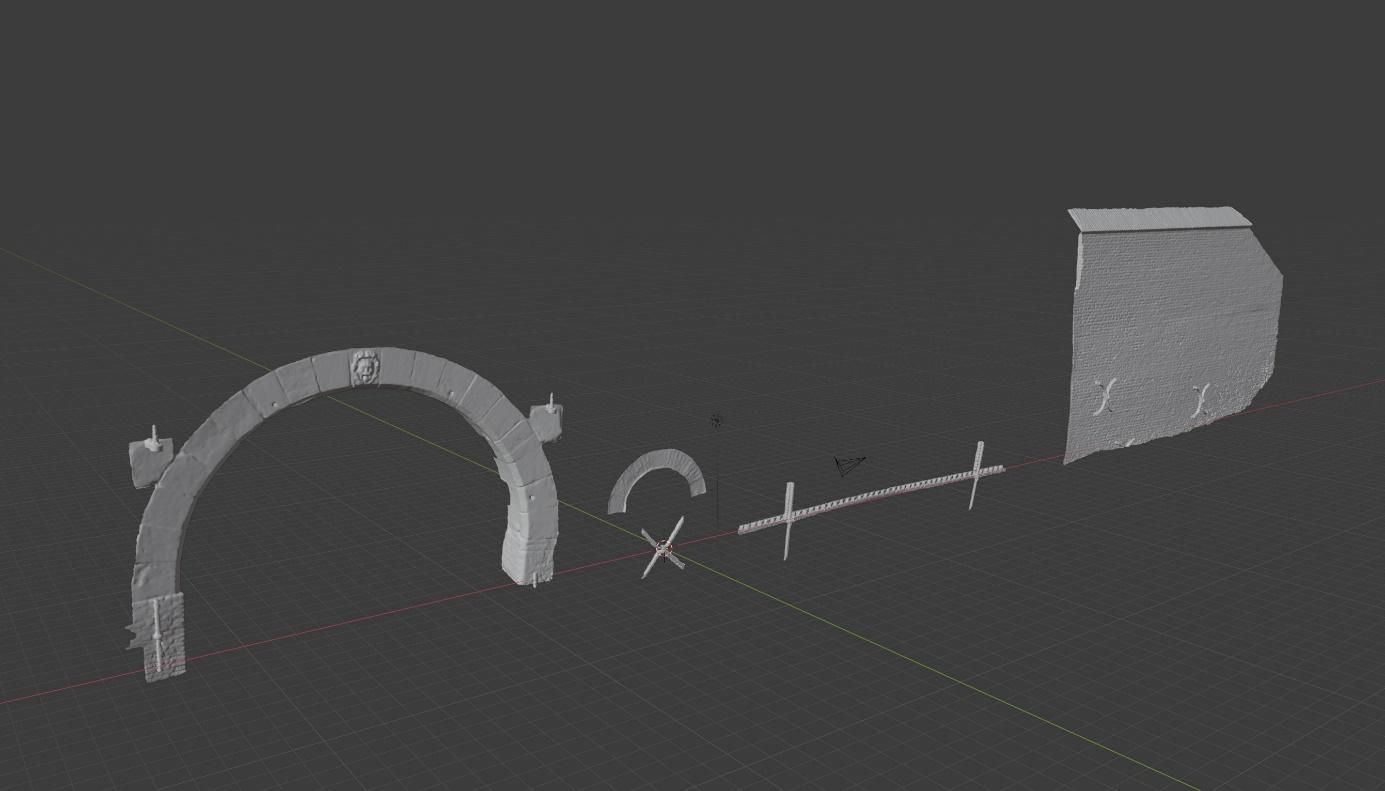 At the time, I worked very little with displacement textures and the render resolution was 1920x1080 by default. This gave a number of advantages. The low resolution textures were not noticeable and the omission of displacement maps was not yet visible. If I were to render the scene in 4K, this would expose a lot of errors, but this was not yet the standard. 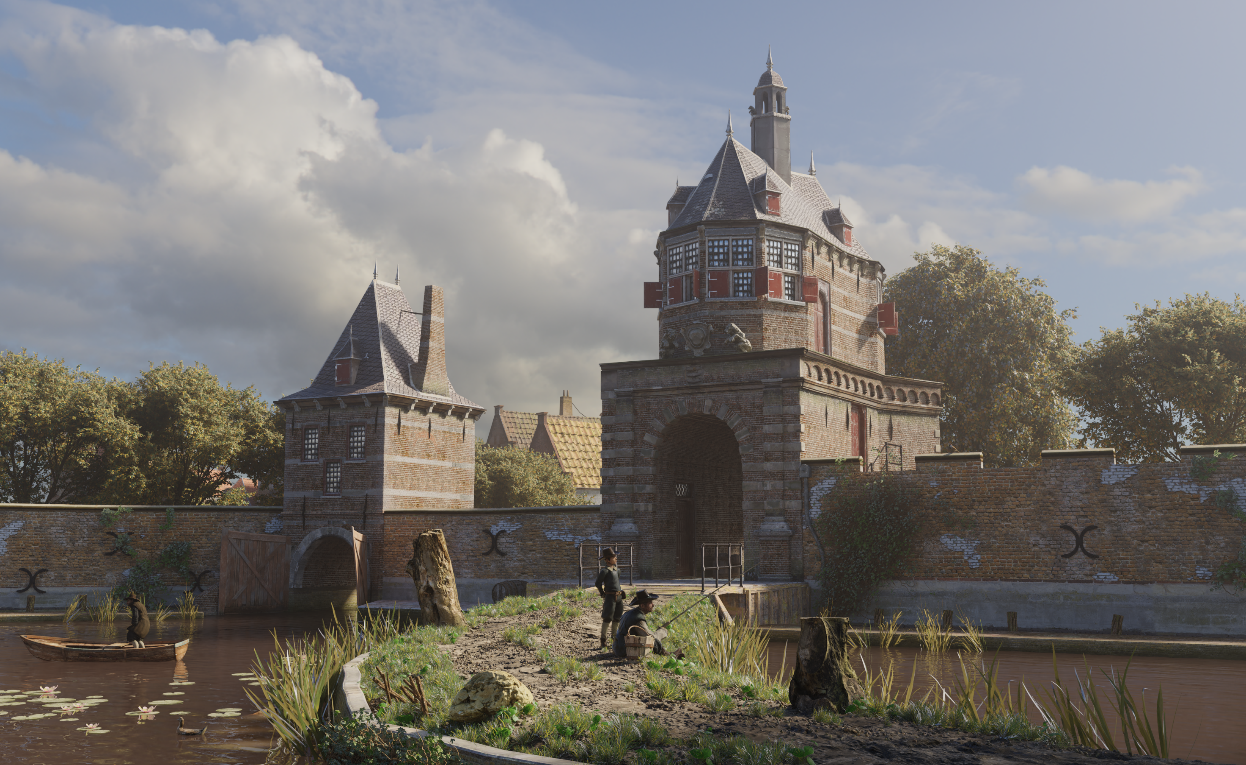 I was very happy with the end result, but there was more to it than what I had put in at the time. A lack of time was the main culprit here. Because the gate was now in the news, I wanted to show the reconstruction to the public. However, I did not add the work to my portfolio—it lacked the magic I felt in my other works. I believed a moment would come where I would give the scene a second chance.

And it did. Because of the pandemic I was able to travel a lot less. However, as I love nature, I got my hands on a piece of land where I could maintain a forest and plant a garden in my spare time. The piece of land overlooked an old rampart where an old water tower could still be seen—a truly picturesque sight. I spent a lot of time there and slowly my creativity started to bubble again. My sense of creativity had been gone for months due to the hectic corona time, and inspiration was hard to find. But now, there was that sight of the water tower that completely awakened me again to breathe new life into an old scene.

A lot had changed in terms of technology in those five years. Where in the previous design I still worked a lot with 2K textures, it was now generally 8K textures. Everything had a displacement layer and the use of nature also played a much more prominent role. Also, my renders were now in 4K, which, as mentioned before, presented new challenges. What had also increased was the use of photo scans. Not only for textures, but also for scanning certain ornaments. I use these where possible.

For the design, I opened the old Blender file from 2017 and removed as many old models as possible. Only the old foundation and some background buildings remained. Step by step, I added a new texture layer to the buildings in the foreground. I used my new material blend techniques to get the wall structure to look as authentic as possible. In my view, the old scene was way too crowded and needed to be brought back to something really simple. I removed some characters and worked on a new storyline. After two weeks I let it rest for a while, only to pick it up again a week later for the final adjustments. 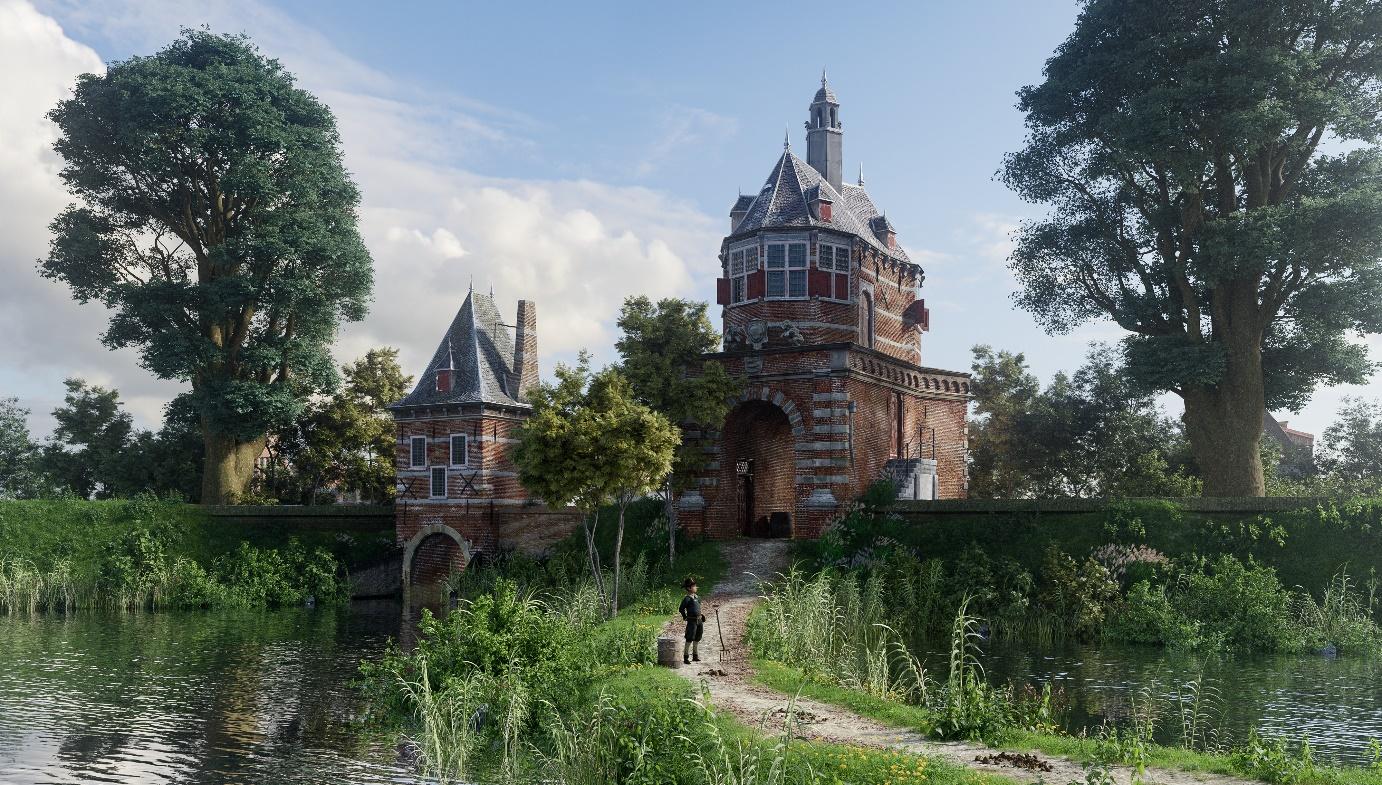 And here it is, the updated version of the entrance gate with the title 'Behind the gates'. It has now been two months since I finished the scene and I am slowly but surely seeing things again that I would like to adjust. But maybe in a few years something new will come my way that compels me to add a new chapter to this scene.

If you want to learn more about how the development of large landscape environments comes about, read my book Super Focus, where I reveal many experiences and secrets of this wonderful profession. For enthusiasts, there is a new course in which I explain in detail how I make 3D scenes and what it involves. The scene above is discussed in detail. 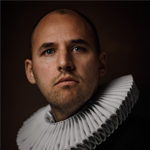 Rob Tuytel, Co-founder of the CC0 platform Polyhaven. He has also taught more than 80,000 students to impart his knowledge about the creation of 3D environments. 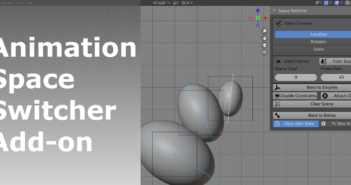 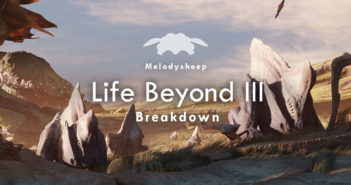