Hi, My name is Aditya and I am an engineering student and freelance digital artist from India. I have been using blender for about a year now and my work mostly includes surreal abstract landscapes. I have played video games for a very long time and have always been fascinated by the environments and models in them.

I discovered Blender through YouTube and since then it has been a journey learning about 3D software, thanks a lot to different tutorials and the Blender community in general.

I wanted to create a landscape with alien-looking abandoned structures. For gathering references, I surfed through ArtStation and Pinterest and created a mood board using PureRef. PureRef is a pretty good and simple application when it comes to creating a collage of reference images. 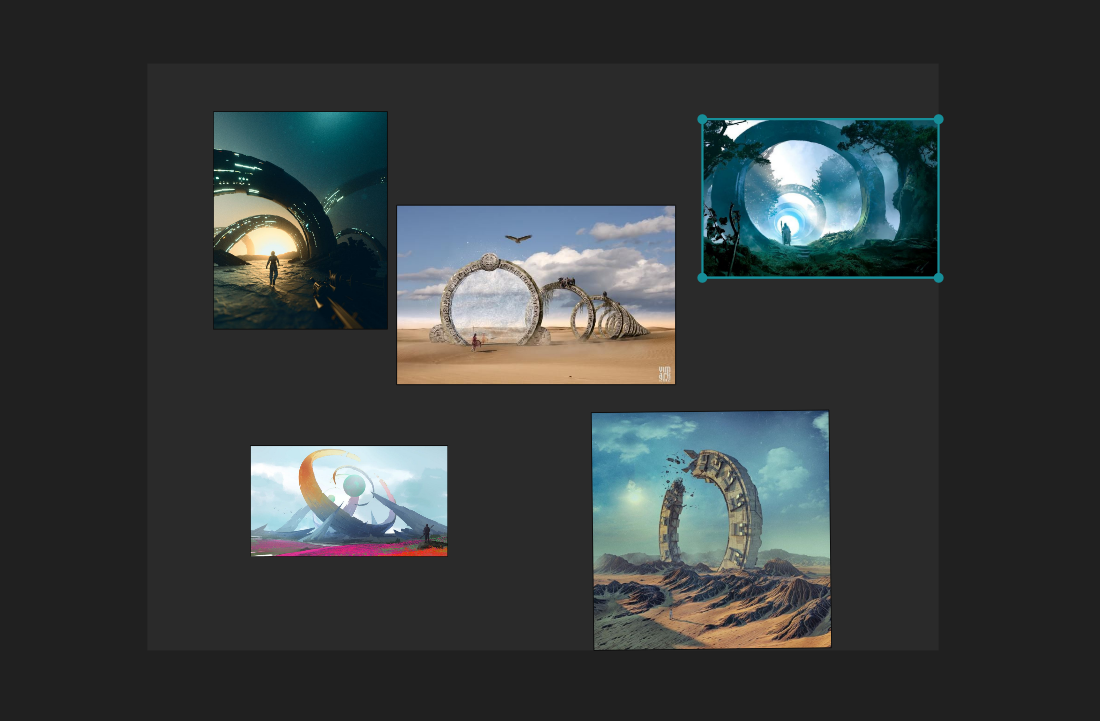 To create the highlight of the scene, the 3 rings, I used a subdivided disc and, using a displacement modifier, created the greeble-like look. For the displacement maps, I used a JSplacement. It is another very useful software that can be used to quickly generate displacement, normal, and color maps in high resolution. I have previously used JSplacement to create similar structures for my artworks. 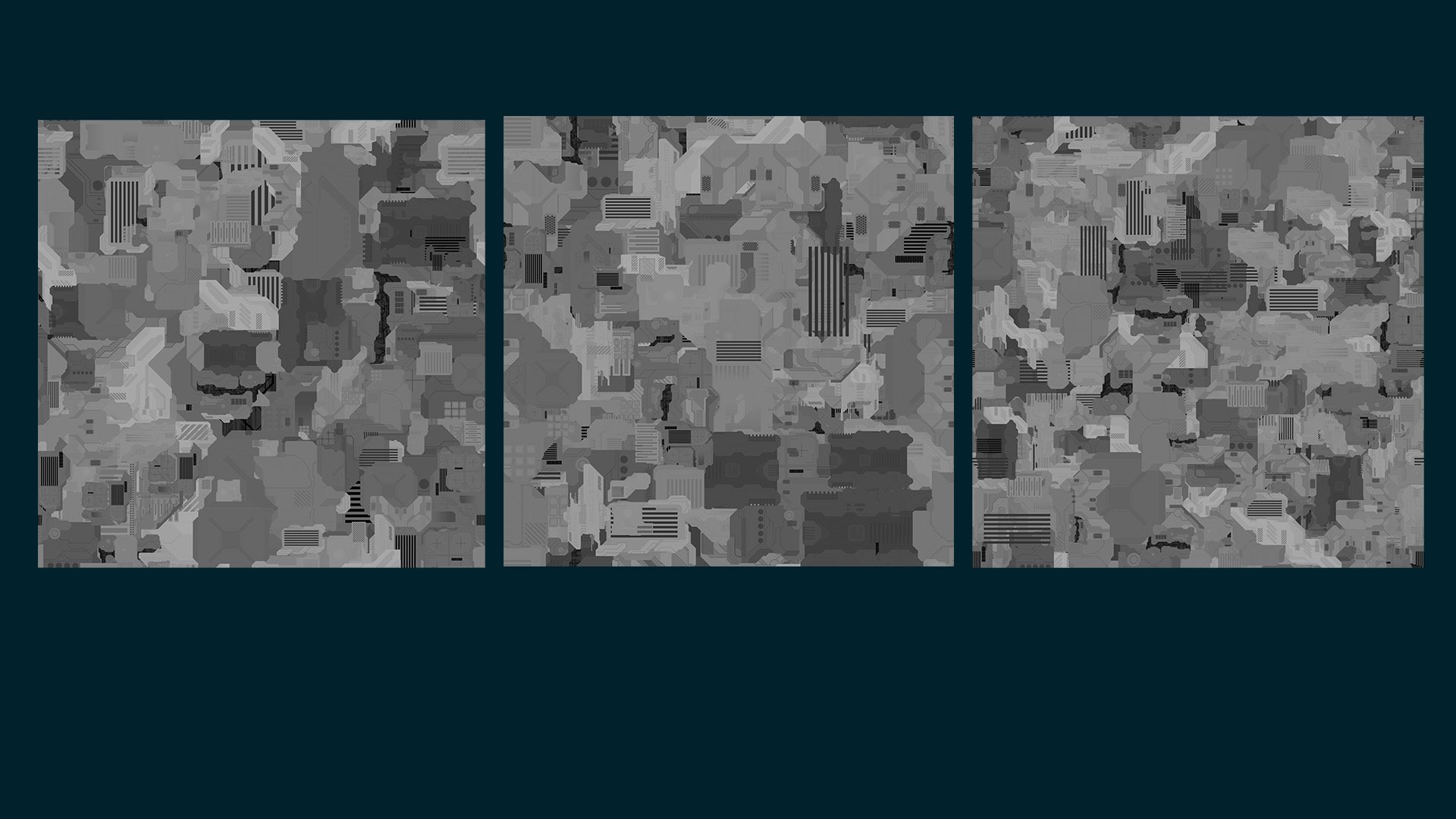 Displacement Maps used in the scene.

To create the environment, I started with a very simple sculpting of the plane. I used a Multiresolution modifier to achieve a non-destructive subdivision suitable for sculpting.

As for the brushes used for sculpting the plane, I downloaded this Collection of Brushes from Blend Swap.

The sculpting gave a good rugged look to the landscape. The sculpting, however, wasn’t very detailed as the landscape would later be covered with vegetation and adding unnecessary detailing would have increased the polygon count, which in turn would have made the entire scene slow to process.

The landscape was later covered with vegetation, rocks, and mushrooms using the Graswald add-on and Quixel Bridge library by Epic Games. These not only made the entire scene look surreal but also helped in hiding missing details of the sculpted terrain. 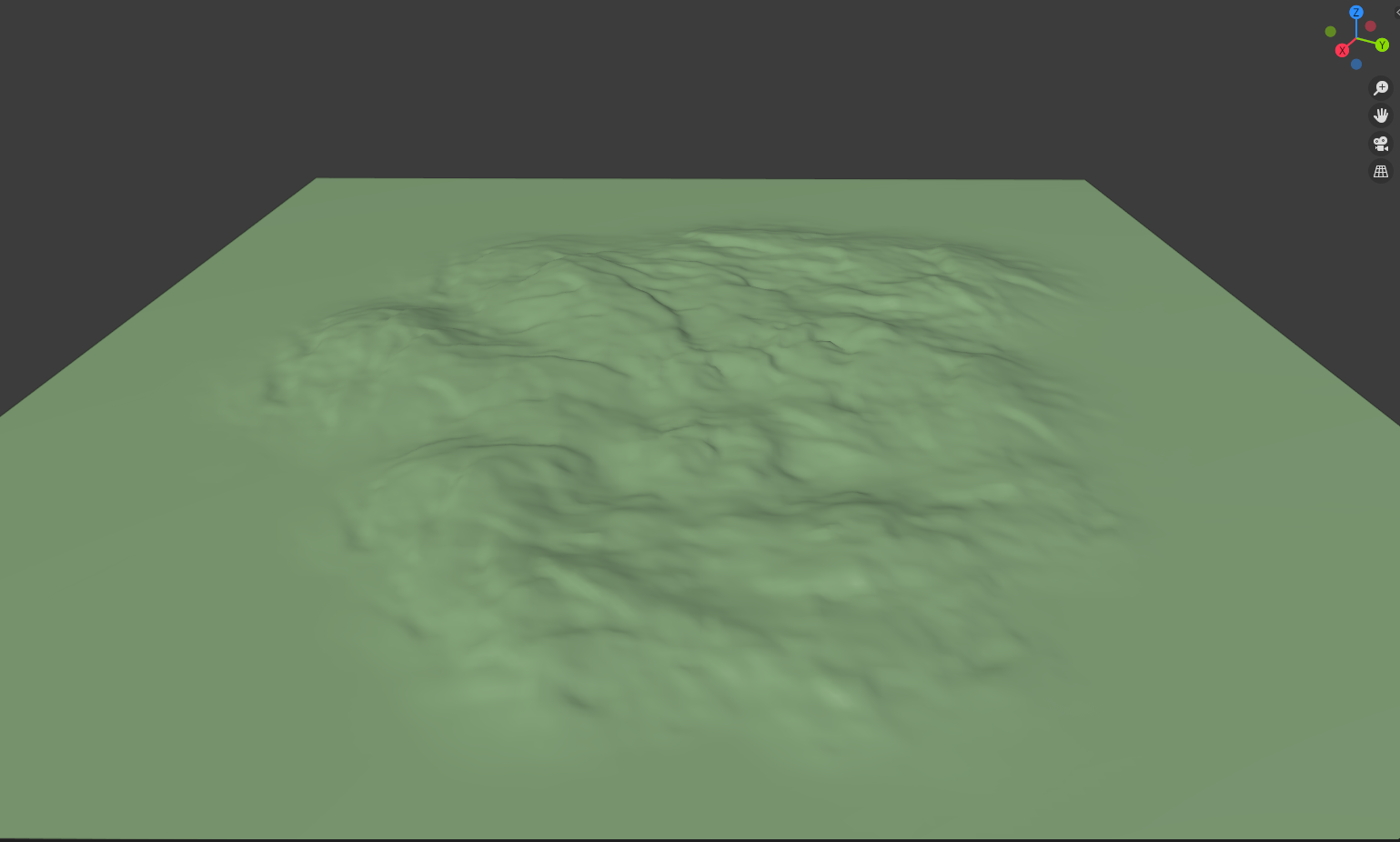 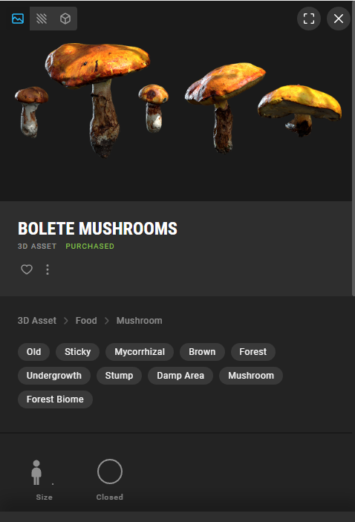 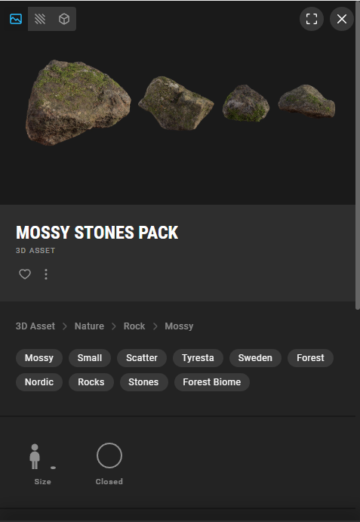 Finally, for the rocks in the background, I again used the Quixel Bridge asset library. To change the look of the rocks according to the scene, I did a little sculpting and finally added some vegetation on them. Similarly, for an abandoned rusted look on the rings, I used a concrete texture provided by AmbientCG, and for the inner corroded ring, I created a procedural rusted metal texture. 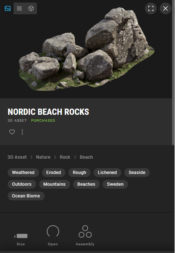 Rocks used in the background.

For the human model in the scene, I used Mixamo. They have a great library of pre-rigged characters to use. And as for the lighting, I used an HDRI; personally, I feel an HDRI provides better lighting conditions than complicated lighting setups in most outdoor scenes. 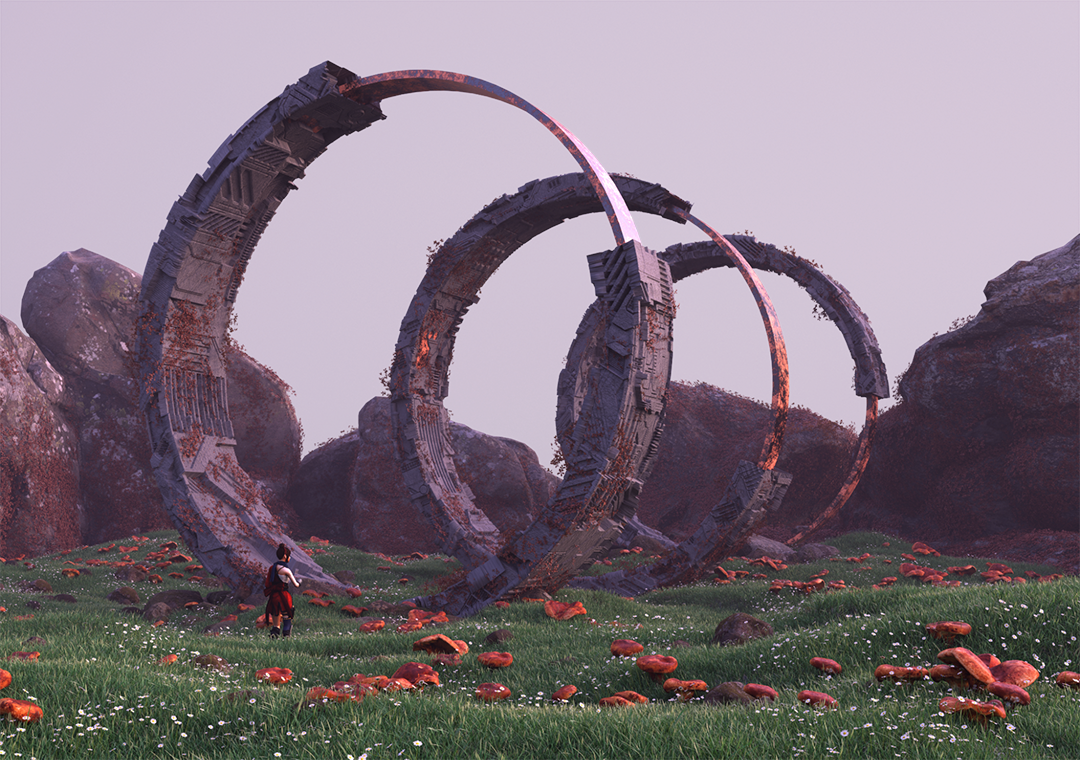 Raw render of the scene

For the final render, I rendered the scene at 300 samples at a resolution of 3840 x 2700 pixels using the Cycles render engine and OptiX denoising to remove any unwanted artifacts.

Finally, I used Photoshop for the post-processing, added some fog to the scene, color corrected it, added a background from Unsplash, and used some brushes to give it a very subtle brushed look. 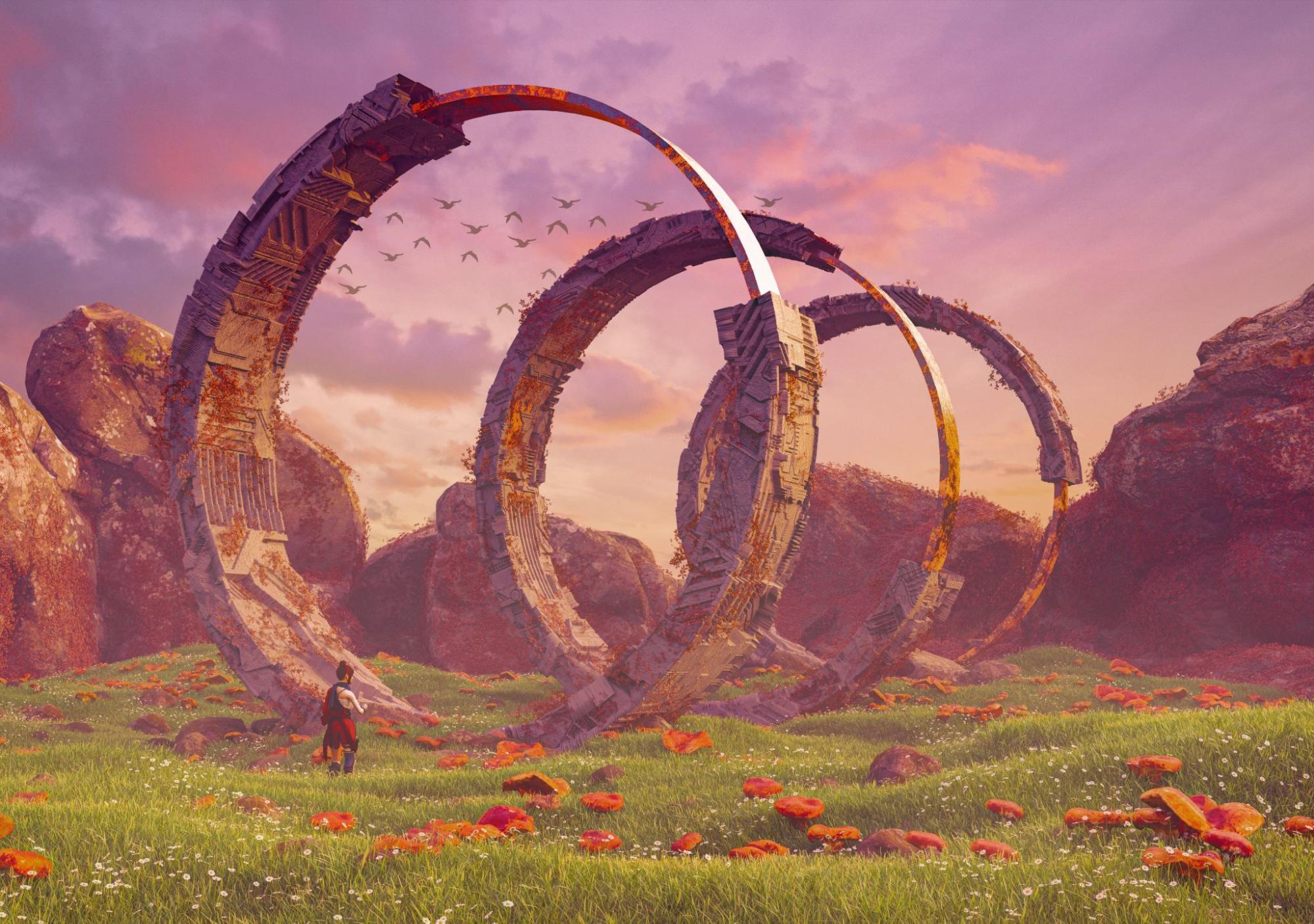 Aditya Sahay, Freelance artist and engineering student based in India. I have been doing digital artworks for over a year now and my artworks are usually around themes of abstract, surreal landscapes. 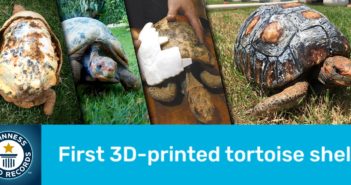 Previous ArticleFirst 3D-printed tortoise shell made on Blender is on Guinness World Records! 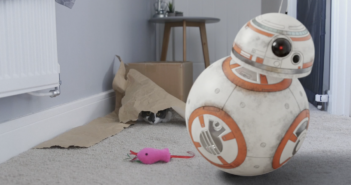 Next Article Video: My cat chasing a BB8 I made in Blender