Hi, I’m Mobin, 27 years old and I’m a Turkmen living in Turkmen Sahra, located northeast of Iran. I studied civil engineering and right now I’m a part-time car mechanic and worker. I do drawings as a hobby and started getting into 3D about 1.5 years ago.

After I served my time in the army I was introduced to Blender through Steam, followed by the old 2.79 donut tutorials. I found sculpting in Blender very relaxing. These days you can find me doing more sculpts in the Blenderartists sketchbook section as Weekend.

Origins of the Project

I always found the long-time lock screen that I had on my PC very attractive, and one morning I began to wonder if I could sculpt it in Blender. Unfortunately, I never found the original illustrator of the image but I found the reference for it, which originates from around 2012.

I started sculpting from the basic shapes. I stretched out a sphere and duplicated it. 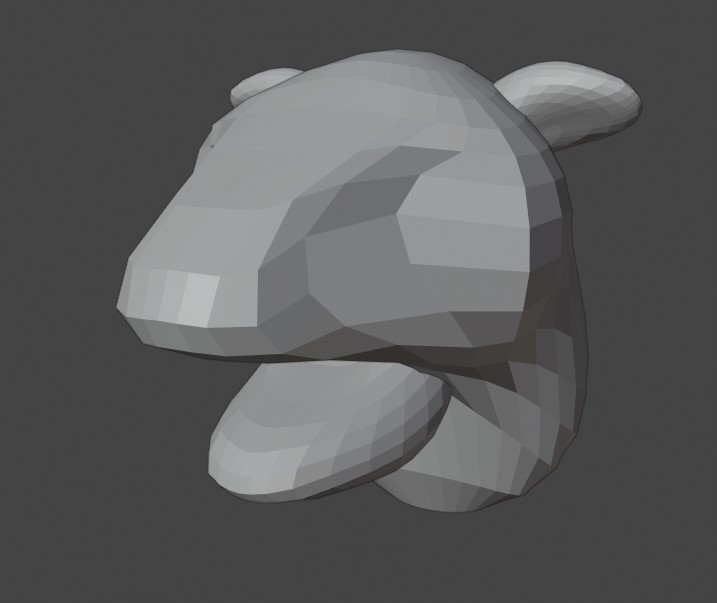 Then I adjusted it accordingly and made a base mesh out of it using the voxel remesher. 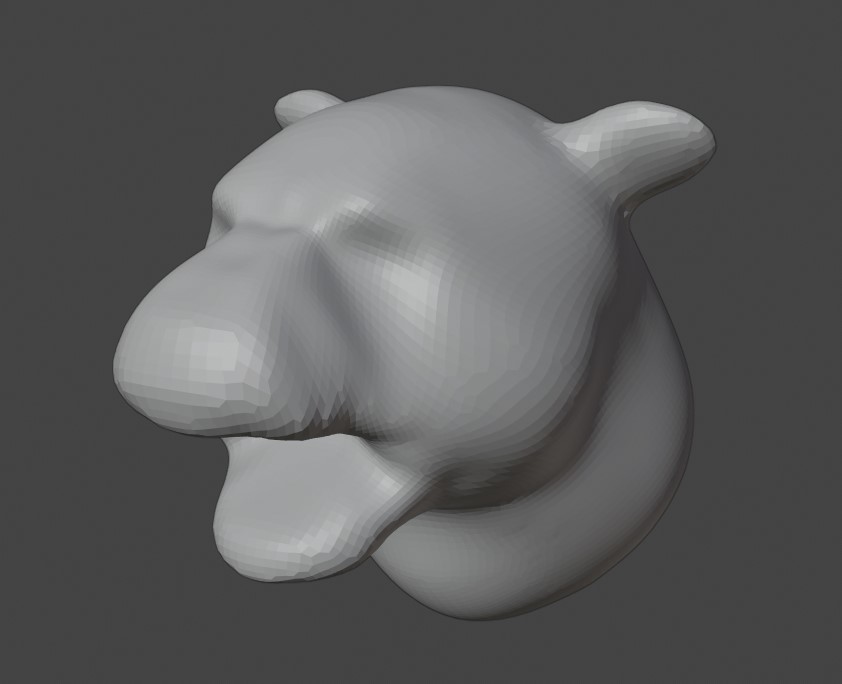 Now for the brushwork and to add more details. 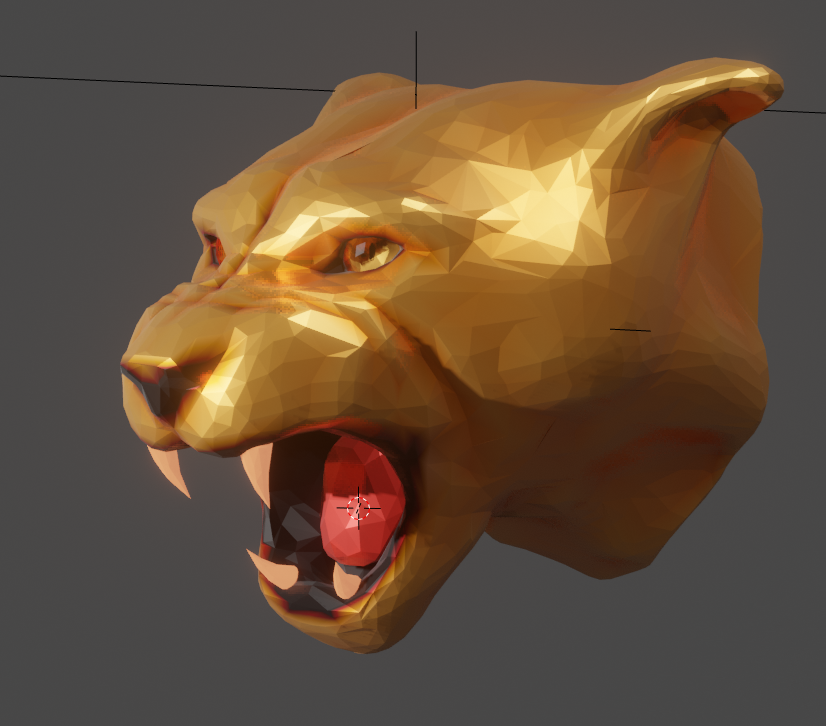 Brushwork took about 20 minutes to lay out the basics. I colored it using vertex paint and generation of dirty vertex colors (it generates something like AO as a vertex paint). I set my goal to be achieving an NPR look in EEVEE.

After that I found myself needing more references, so I googled mountain lions. (The original reference is a female lion, I presumed.)

At this stage, you have to find pictures from every angle. I mainly stuck with real-life references but I found that some drawings helped me to exaggerate the expression. 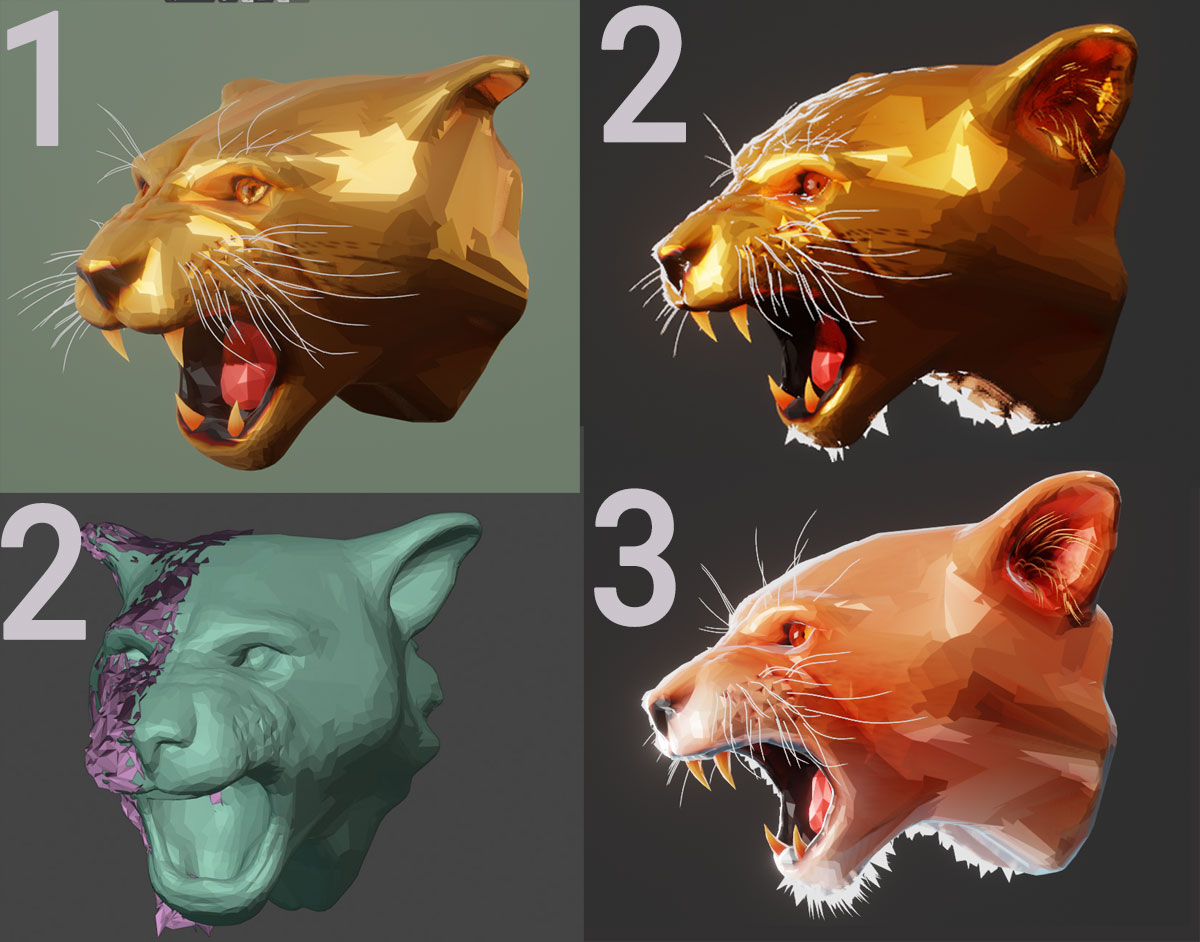 For a fixed look with NPR, grease pencil is a quick and easy tool. But I had not chosen a fixed camera at this stage and I was still experimenting with camera positioning. So the safest way to continue was hair particles. I made a white shader and applied it to the hair and planted the hairs one click at a time. (As shown on no.1)

To fake the look of backlighting, I colored the lion’s hair white. To achieve a look that was more on-point, I duplicated, inverted and fattened the lion mesh, randomized it, and hid the half that was facing the camera. (As shown on no.2)

I spent some extra time on the model doing sculpting, vertex painting, and adding extra hair particles. For the extra shine and shading on the lion, I just used the Principled BSDF with a metallic value of 0.9. (As shown on no.3)

To achieve a pixelated look and feel, I used the decimate modifier on top of my sculpt so I could edit it easily.

Two layers of decimation were ok for me. One for getting it to a low poly look and the second for getting that edgy look using planar decimation. Note that I had these modifiers from the early stages and turned them on to check if the sculpt was good enough. 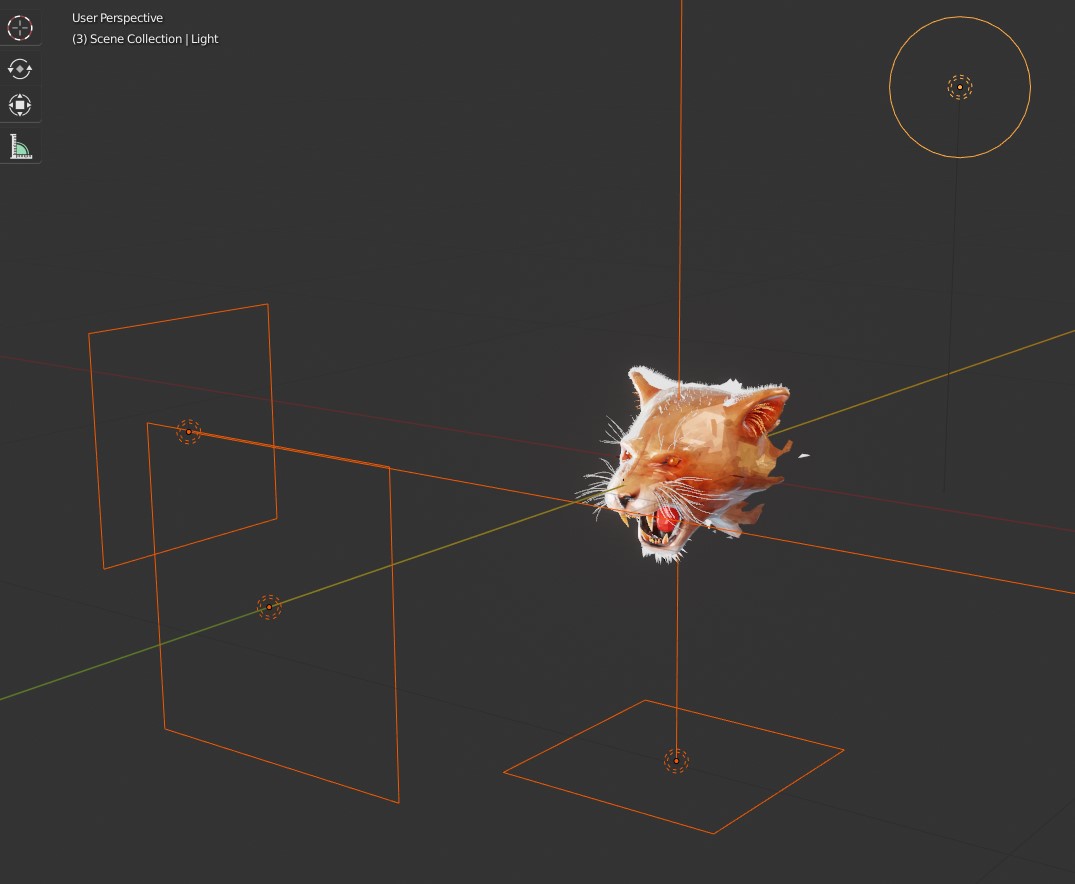 Lighting plays a large role in the feeling that NPR renders send to the viewer. Because I had faked most of my lighting before, I could just play around with lights to get the highlights that I wanted, as it was the only thing I wanted from them.

So It’s time to wrap it up! I added some extra particles around the lion: 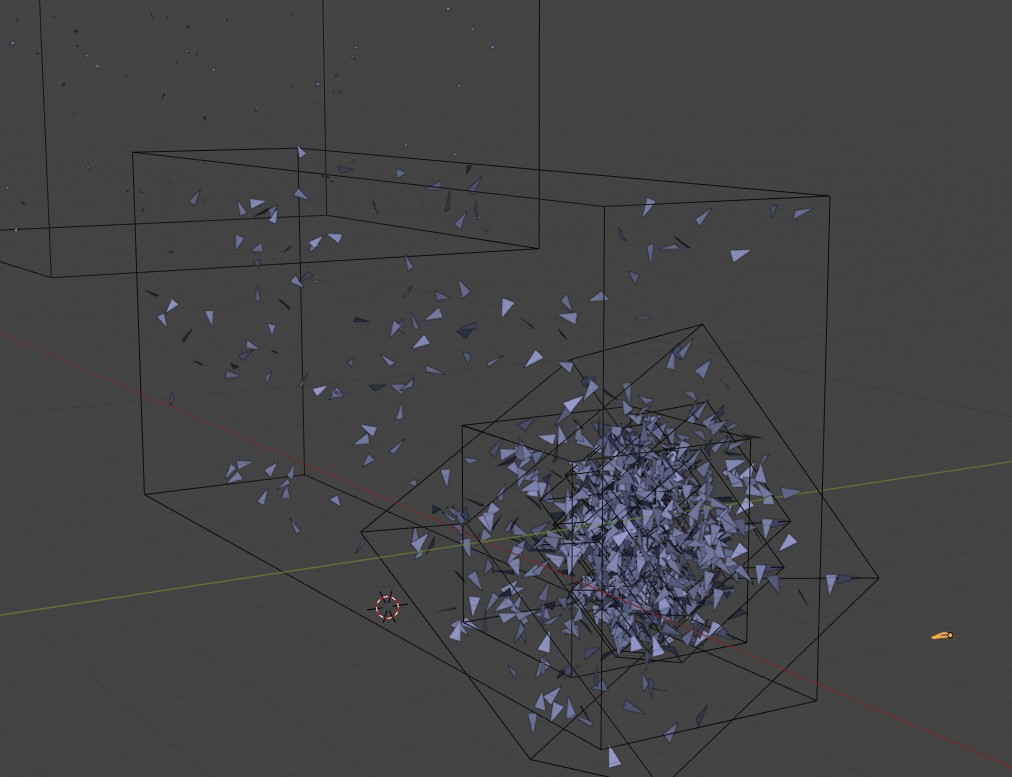 For the background gradient I usually do this node setup:

Making the color of background separate from what it actually emits lets me have more control over my final render.

And a little color correction in compositing. Nothing too complex:

And there we have it! 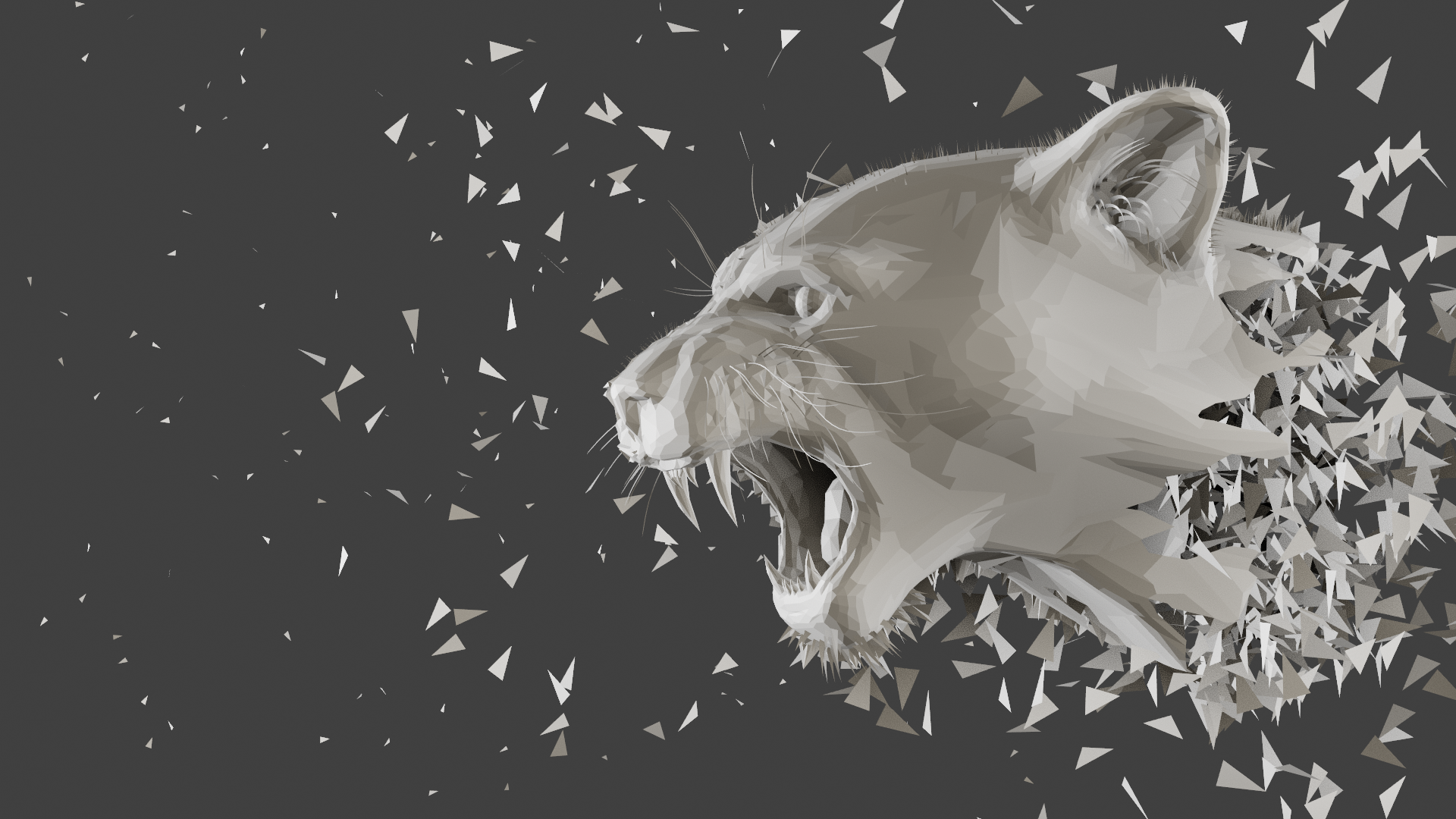 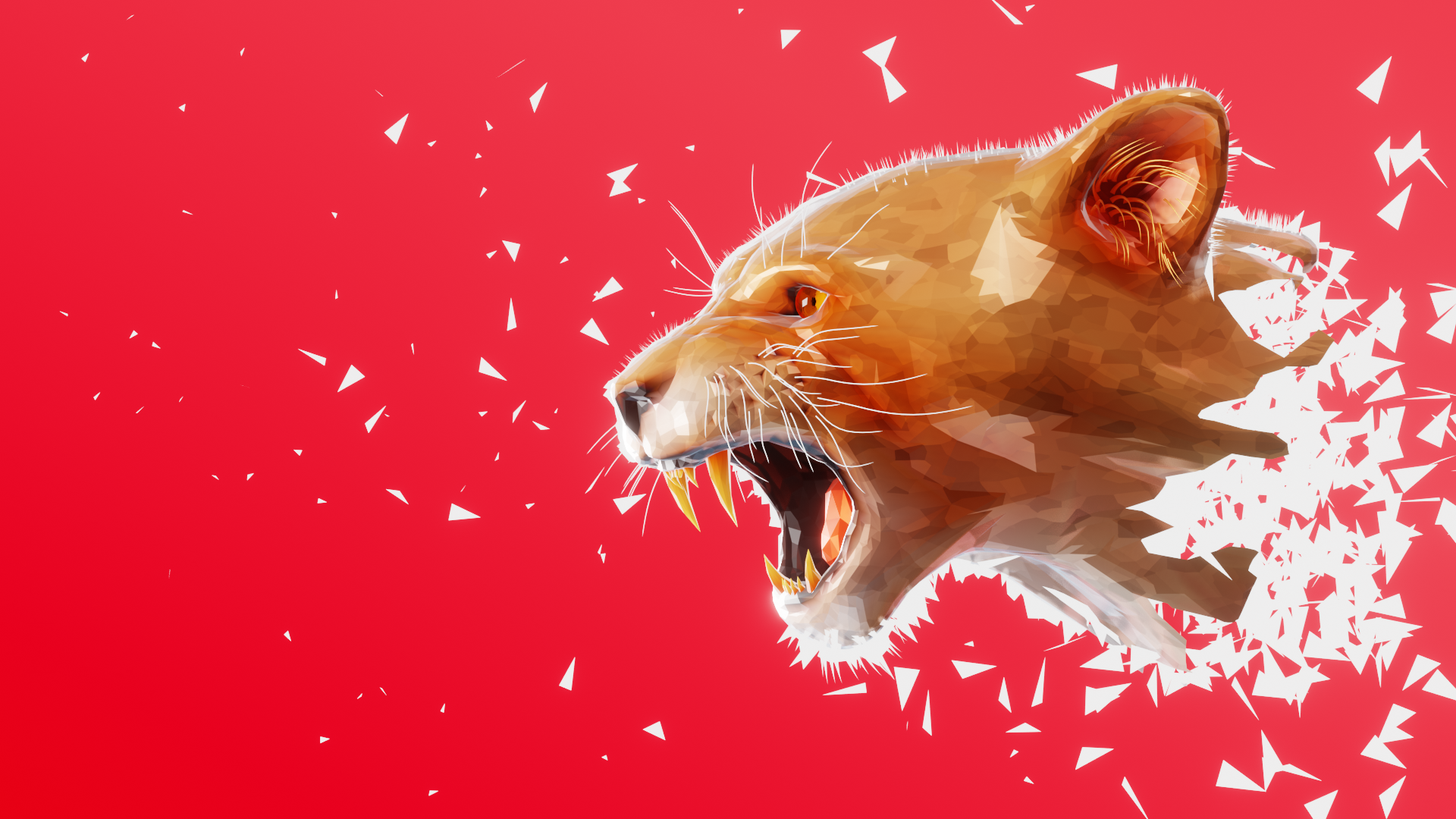 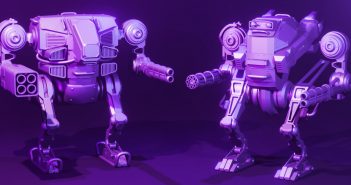 Previous Article"How I Made the Mech Generator for Blender 2.8" 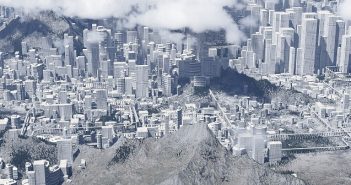