The yearly Blender Conference in Amsterdam is like a Mecca for Blenderheads, offering three days of informative presentations by motivated Blender users from around the globe. I've always wanted to attend the BCon, and to my great contentment this year it has become reality.

Until last year, the Blender Conference took place in The Balie, a charming grand café / restaurant near the Leidseplein, but with Blender's rapidly rising popularity and growing amount of BCon attendees, the event was hosted in the Compagnie Theater, which is larger, and closer to Amsterdam Central Station.

I've written daily impressions of BCon highlights, at least from the events I've attended, because sometimes visitors need to choose between two or three presentations / workshops that take place simultaneously.

As I approached Amsterdam by train for the third Blender Conference day, the train suddenly stopped. Shortly after that the conductor informed us that a swan was sitting on the railroad track. The swan turned out to have a broken wing and had to be carefully removed by railway personnel. A sad incident, and kind of poetic: a vulnerable swan trapped amidst humanity's mechanized society.

Being late due to the unfortunate swan incident, once I reached the BCon I rushed to my friend the coffee kettle, then ran to the theater for the Spring production presentation. Not long after that, someone came sitting next to me, who turned out to be no one less than Pablo Vazquez. 🙂 I couldn't resist taking a picture, and it was only when I was preparing my photos for this article that I discovered the man behind Pablo. He probably had a bad night's sleep. 😁 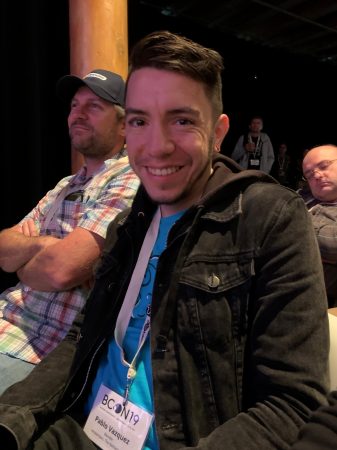 Angelo Tartanian, Principle Engineer at LexSet explained in a clear and humorous way how a convolutional network works, and showed how they use Blender to build datasets for machine learning, for example by scattering 3D furniture in a 3D room and rendering that from many different views, different lighting conditions, different textures, and so on.

Blender by the Numbers, Francesco Siddi

Blender's Francesco Siddi presented a wide range of interesting Blender-related statistics.
A great moment was Francesco informing the audience that according to the statistics only a small part of them was a Blender Development supporter, resulting in slightly embarrassed laughter across the theater (disclaimer: I'm a supporter 😉).

Some trivial additional statistics: I turned out to have snapped no less than 800 photographs during the last BCon day, so I had to greatly reduce the volume. It took about two hours to make a final selection, download the remaining 158 photos from the cloud, mass-resize them and upload them to BlenderNation's WordPress CMS. 🙂

Everything you wanted to know about rendering Glass (not only with Cycles), Vilem Duha (video)

Vilem Duha, 3d artist and coder at BlenderKit, shared some advanced Cycles glass knowledge, such as an explanation of Fresnel behaviour at different light ray angles, and node setups for architectural glass and dispersion.

A pro tip by Vilem: the principled shader has a default color that is not completely white, while for clear glass it needs to be white.

When Vilem Duha's workshop was finished I stumbled upon Pablo Dobarro, the skilled coder who is improving Blender's Sculpt Mode at an impressive pace. 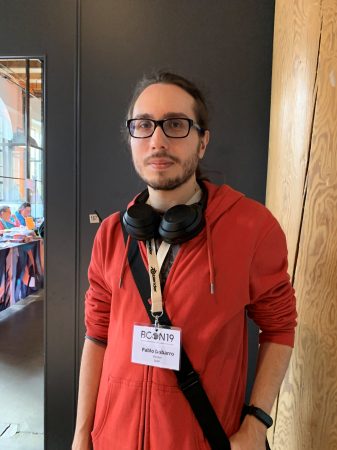 Pablo is humble and gentle. He laughed when I said the 'lines of code moment' (read my report of the second BCon day for that) was one of the funniest moments of the Blender Conference, and told him he almost made the audience believe anyone could code his Sculpt Mode improvements.

I told Pablo that people often deservedly praise his coding skills, but should not forget that Pablo is also a very talented 3D sculptor. Upon asking if Pablo uses existing 2D concept art for his very charming girl sculptures, he answered "Only sometimes".

I also asked Pablo if he visits the very extensive Blender Artists discussion that is dedicated to his Sculpt Mode achievements. He turned out to visit the thread every now and then, when someone points him to it.

Julien Kaspar put on a cosy robe and magically changed into a sculptor version of Bob Ross, creating a cartoony upgrade of Blender's Suzanne monkey, while calmly elucidating the process. Really satisfying. I'm thinking of hiring him to sculpt-tutorial me to sleep.

Julien uses custom pie menus and sculpt tool keyboard shortcuts to speed up his workflow, and started blocking out using mainly spheres, stretched to all kinds of shapes for the torso and limbs.

A pro tip by Julien: with multiple objects selected, hold Alt when using Remesh to Remesh all objects at once, while keeping them separated.

In the end I had to leave for the next presentation, but the Suzanne upgrade was almost finished and looking good when I left.

This presentation should actually have been Jama Jurabaev's Grease Pencil For Concept Designers, but his flight turned out to be cancelled, and on top of that he had lost his suitcase at the airport. Very unfortunate. Hopefully the suitcase was found and the cancelled flight was compensated.

Dalai Felinto took over by showing how Blender's development team and workspace have improved in time, going back to the early days of 2.8 development, back when not even modifiers were converted from 2.79 yet. Dalai also stated how the early adopters were very valuable for 2.8 development, and how the 2.8 Code Quest really made Blender 2.8 take off.

Astoria VR - Back to the Eighties with Blender 2.80, Sebastian Koenig and Simeon Conzendorf (video)

Sebastian Koenig (3D artist) and Simeon Conzendorf (Developer) from blendFX tell about resurrecting the interior of the famous Astoria hotel and nightclub from the former East Germany as a VR project, using Blender in conjunction with Unity.

This marked the end of my first three days of experiencing the Blender Conference. When I was about to leave I encountered Ton Roosendaal near the entrance, and we had a pleasant final chat. We've got a shared background in Commodore Amiga software development. Ton reminded me of the interesting fact that the predecessor to Blender was coded on an Amiga, partially in BASIC and partially in Assembly language.

I told Ton how the Blender Conference impressed me in all kinds of aspects, from the organization to the dazzling amount of knowledge that is shared during the three days. I feel like Neo in The Matrix after the data transfer interface is removed from his head. In my case the line would be "I know Blender!" 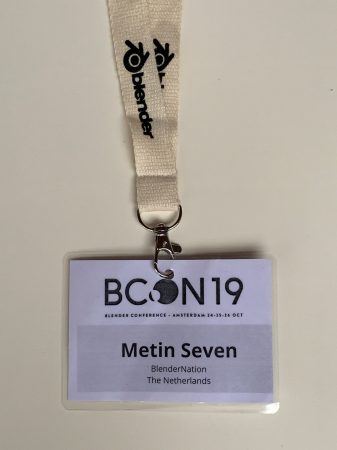 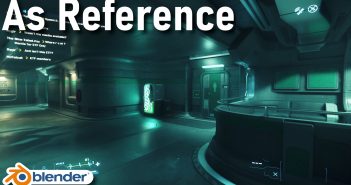 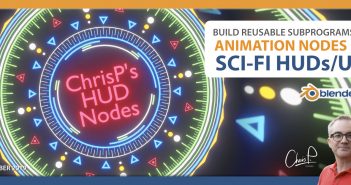