3 years ago Atypique Studio was born and started developing the game "Noara : the Conspiracy", A turn based hybrid tactical MOBA. But beyond a game, Noara is a whole Universe born from Jeremy's mind 15 years ago. And this week we launched our first crowdfunding campaign to release the first book of Noara.

This books is in French for the time being but we're planning to translate it in English very soon. Few months ago we decided to work on a trailer to announce this book release and to present our world during the Paris Games Week 2018. It was rendered in EEVEE and I will explain you why I've chosen EEVEE and what challenges I had to take

The French version of the trailer is available here.

During the fall of July 2018, we started thinking about a trailer for the game and for the PGW2018 . The trailer was released during the show and also during the Bconf2018 where I had the chance to show it to Andy Goralczyk that pushed me to show it to Ton Roosendaal and I ended up presenting it during the flashtalks of the open stage.

When we started working on the trailer, we had a script, the text for our voice actor and a more or less defined idea of what we wanted visually. Then we had the choice to ask a Chinese studio to make the trailer for us ot to make it on our own meaning that, excluding the audio, I will have to do everything on my own. I just took the challenge, you don't get this kind of project every day. Few questions had ti be answered at this moment.

At the very beginning of august 2018, as I was starting to think about it in 3D and we had an approximate storyboard, I've decided to make it using EEVEE. That was a good challenge and the best way to learn and get use to the incoming versions of Blender 2.8. One of the big difficulties was that it was in a very early stage and was absolutely not meant to be used in production. It crashed a lot and most of the tools I was usually using were not available yet.

So I've worked a lot between the 2.79 and the daily builds of the 2.80. To get more confident with the project, I've started with a simple pice, the crab character we see in the beginning of the video. I've sculpted it, modeled and rigged in blender and textured in Substance Painter. Once I had a satisfying piece, it was less frightening to think of the broader pieces. 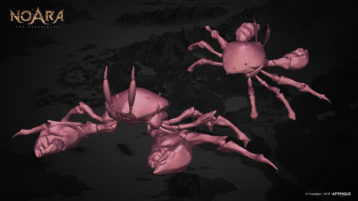 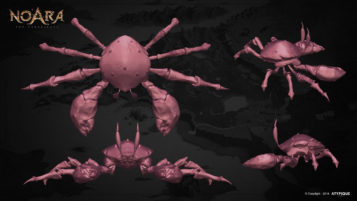 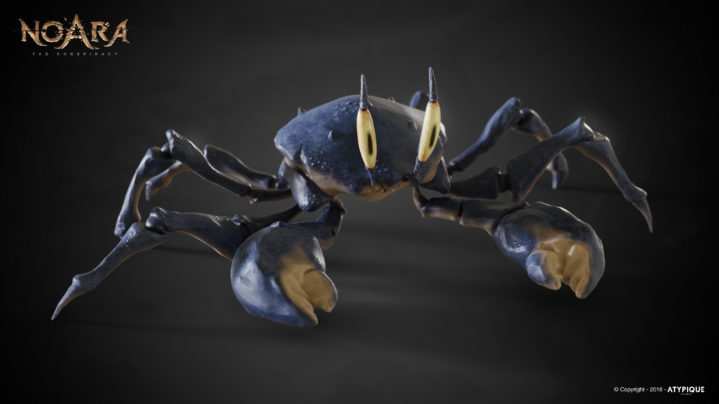 The very first sequence, the underwater intro, has changed along the way as the very first version wasn't matching the general feel of the trailer and the next sequence atmosphere. Even id it wasn't used in the end, it's the sequence I spent the most time on as this is where I got familiar with EEVEE and realtime rendering in general (never used any Unity or Unreal Engine before). 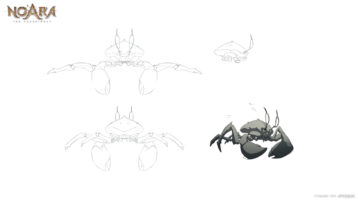 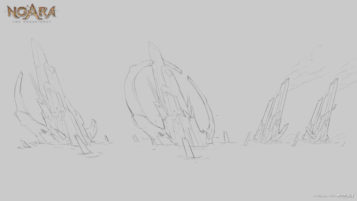 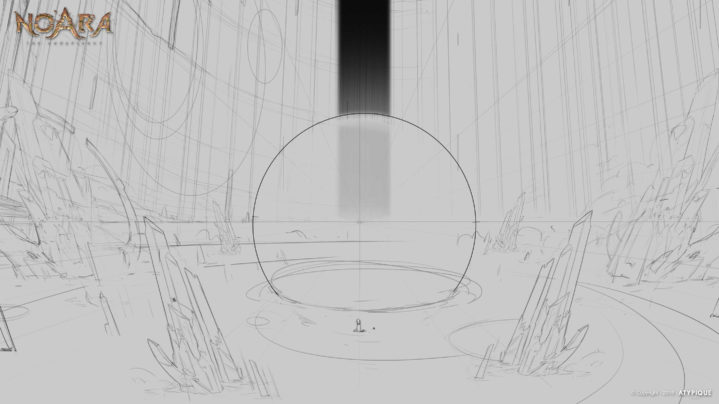 I've then worked on the trailer pretty linearly following the script. I've started sculpting the big crytals from the world map room based on the concept by our concept artist Spoon. I've sculpted the models in Zbrush, made the retopo and Uvs in Blender and texturing in Substance painter and that was my workflow for most of the trailer's assets.

My summer holidays were more or less happening in the beginning of the project and we were not planning to show the whole Throne room and the King Akuyandi. We've initially planned to show only his arm as in the very last sequence of the movie. But I enjoyed my free time working on the whole charatcer mostly to train anatomy and get better with Zbrush. Getting as much feedback as I could from Spoon. As we were pretty happy about the result, we decided to had him to the trailer and build the throne room. At this stage, I was confident enough to work on the whole scene and it was done pretty rapidly (compared to previous sequences). 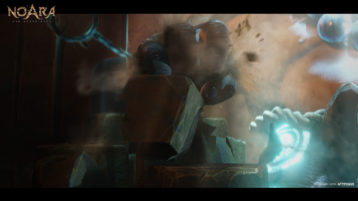 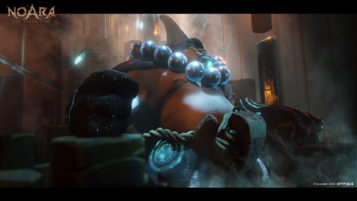 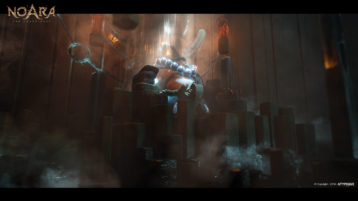 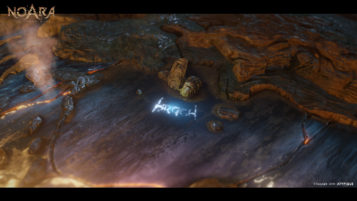 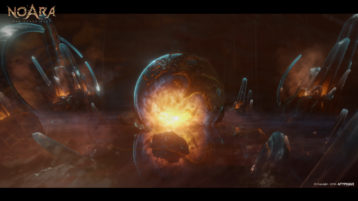 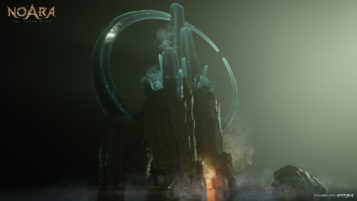 One of the biggest challenge of the project was the lighting. As we wanted a dark and shady mood, I couldn't afford using HDR lighting as it would be hard to occlude and control. Plus, I did wanted to get advantages from EEVEE real time volumetric rendering too. S the scenes were mostly lighted using multiple lamps and I've spent a lot of time adding/placing assets to hide lamps direct reflections on the water surfaces, as EEVEE won't be able to occlude them as a raytracing engine would do.

The other specificity of the trailer is the need of steam to translate the underwater and volcanic mood of the cave. I was confident I could do this in EEVEE using animated cards and particle system as I did get very convincing result in my tests using time and position based variation of the textures. But at this time EEVEE wasn't supporting particles and it wasn't supporting the time information nore particle informations. That was quite a painfull discovery as most of the mood was relaying on this. I was able to output some fog effect using alpha blending textures on curvy shapes and animated textures but for most of the FX I ended exporting the camera to After effects and start compositing all the FX. 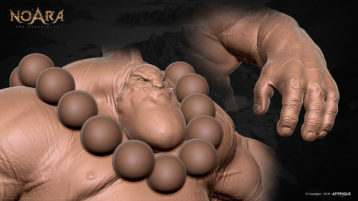 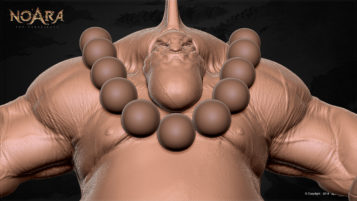 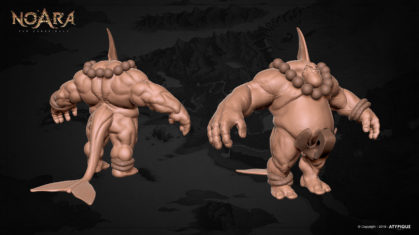 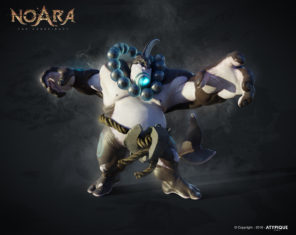 In the meantime, our music writer and sound designer were finishing all the sound design using the 3D playblast and we were able to finish the project one week before the PGW2018 and the Bconf2018.

One of the most impressive thing about this project is that the output is very close from what EEVEE was outputing and there is not that much adjustment between the raw output and the composited result. Just a few colour correction and a vignette effect. There are few bugs in the video, some that should be fixed in the future of EEVEE and other because of my lack of experience but I had the chance to be introduced to Clement Foucault, the main dev. Of the EEVEE engine and he explained me a lot of tricks to get rid of some of the artefacts and how I should have dealt with specific issues. That was an awesome meeting and generaly speaking, an exhausting project but so rewarding and I've learnt so much and I'm proud of what I've achieved here. 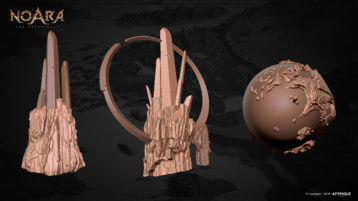 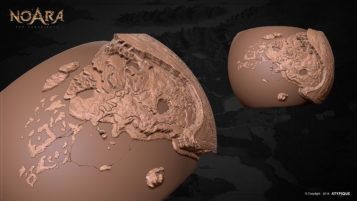 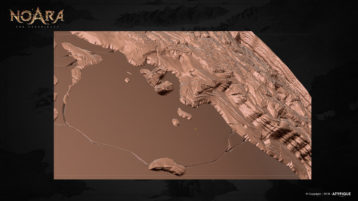 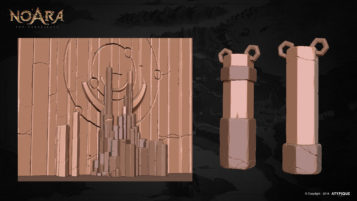 It took me around 450 hours of work from start to finish and I realy hope we'll meet success with this one. Whatever happened, this was an incredible experience and a lot of progress for me. 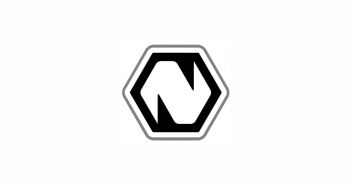