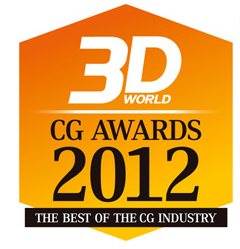 Blender has won the 3D World CG 'Software Update' Award 2012. As far as I can tell, there's no prize attached to this other than the honor of being recognized by the industry.

This award is open to any existing application that has received a sizeable update, introducing useful new features and new technologies to its user base, while maintaining stability and usability.

3D World includes a comment by Alex Telford, who writes:

So Blender has won the software update award? This comes as no surprise to me, as I am in constant awe at the updates that come in every week such as Cycles (GPU progressive renderer), BMesh (nGons), BSurfaces (retopology and curve-based construction), Voronoi Shatter (Dynamics destruction)... The list goes on. This is because Blender is one of those applications that is built by the community for the community: Blender is in a constant state of upgrade, so we never have to wait for a new version to come out to try the new features.