BSurfaces is a modeling and retopology tool which combines the use of freehand strokes, bezier curves or loose edges to generate polygonal surfaces. It can be included in a traditional polygonal and subdivision modeling workflow, speeding it up substantially. It can be used to build both open and closed shapes, extrude selections, bridge between two selections, having full control over the shape, direction, and twisting of the ﬁnal surface. The output is a clean topology composed of quadrilateral faces. Triangles are also possible when building surfaces using crossing strokes. The different options can be modified interactively, allowing to see how they affect the resulting surface in real-time.

Based on the text, one might think that this is just an add-on which provides a mesh loop function and a cross hatch tool for retopology needs - however this is far from what this is. I tested BSurfaces for few days now and must confess, that this should not be an add-on, it should be part of the trunk and Blender. Forever.

BSurfaces combines polygon mesh modeling together with grease pencil and bézier curves. Based on how Blender works the following method has to be followed: 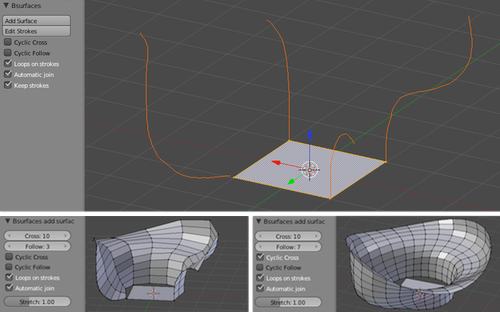 The order in which curves are drawn can be used to control how the loft operation will flow. 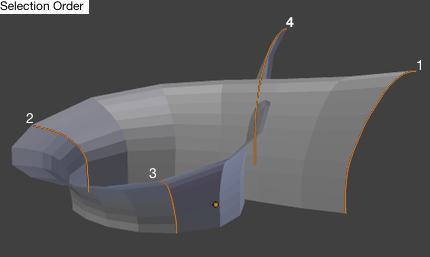 In addition you can also specify the start point of curves inside the curve edit mode to generate twisted surfaces. 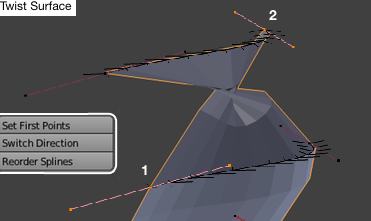 Besides loft this is also an elegant tool to generate surfaces through cross-hatching bézier or grease pencil curves. The following image shows how the curves and mesh start point is selected as well as how the Join command welds close edges together based on the stretch value.

Grease Pencil in Blender 2.5 can be projected onto to a surface while sketching them. As you can see the "Surface" option is checked inside the drawing settings. The following image sequence shows you how I started to draw one layout, meshed it, drew the next layout and meshed it while letting BSurface automatically merge the mesh at the selected mesh edge. This is truly a "draw and click-mesh" job. 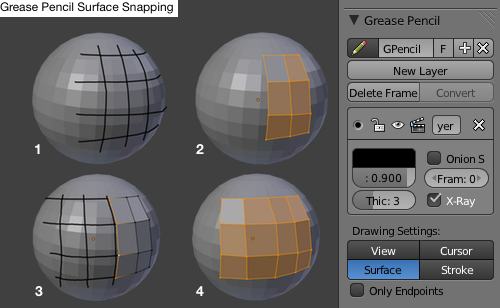 As introduced with Blender 2.5, tools can offer a starting tool bar menu and once the operation is performed additional interactive tool options can be presented. There are various start options for the surface generation as well as an option to edit the grease pencil strokes. Hitting "Edit Strokes" switches into curve edit mode and converts the grease pencil strokes into bézier curves. 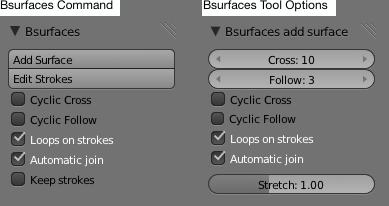 Those adjustments are for example:

I see BSurfaces as a 3D sketch modeling and a perfect retopology tool. The combination of projecting grease pencil strokes on a surface and the automated meshing commands from BSurface building new topology layouts is very fast and requires less mouse clicks as in previews techniques. This combined with a Wacom tablet offers an extremely fluid experience. The topology tools are so productive, that this should not be an add-on but rather be an essencial part of Blender.

This short text can only scratch on the surface - but I hope that it helps you better fully understanding what BSurfaces is about when you watch the movie.

Currently Eclectiel offers this add-on for US $ 39, and also provides 15% to 25% volume discounts. The software will be at one point be released to GPL. The current sale is targeted to reimburse him for the time it required him to program this add-on, which was quite significant.

If there are Blender Python API modifications, and they remain as they have been in the last Blender releases (quite accessible to overcome), which seems to be the case, there will be updates to make Bsurfaces compatible with the last official Blender release. Those updates will be sent automatically, at no cost, to those who got Bsurfaces.