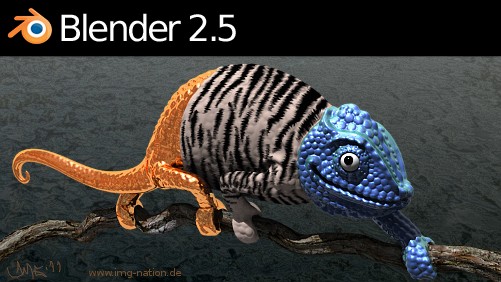 The Blender Foundation has just officially released Blender 2.57. This version is a milestone, as it's the first so called 'stable' release of the new Blender 2.5 series.

The Blender Foundation and online developer community is proud to present Blender 2.57. This is the first stable release of the Blender 2.5 series, representing the culmination of many years of redesign and development work.

The next 2 months we will keep working on finishing a couple of left-over 2.5 targets and we expect to get feedback and bug reports from users to handle as well. If all goes well, the 2.58 version then can be the final release of the 2.5 series, with a massive amount of new projects to be added for an exciting cycle of 2.6x versions. Target is to release updates every 2 months this year.

Congratulations, everyone! And, oh yeah, it has to be said: ugliest splash screen ever! :)