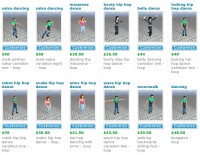 Mixamo.com supplies motion-capture data, What makes it unique is their workflow: you upload your own (rigged) character, map the rig to theirs and choose an animation. Using their on-line editor, you can then tweak the animation before you download and use it. As of today, Mixamo actively supports Blender.

I'm looking for an experienced character animator to test-drive and review this service for us. Mixamo will provide download credits for your use. If you're interested, please tell me why we need to choose you!

SAN FRANCISCO – August 24, 2010 – Mixamo Inc. today announced new support for Blender users looking to create high-quality character animations for their 3D projects. The new end-to- end workflow provides the Blender community with a seamless process to add animations to characters created in Blender or from Mixamo’s Character Creator Suite directly. The entire collection of Mixamo motions is now accessible to Blender users, which can be found at www.mixamo.com.

Luc Barthelet, CEO of virtual world Tirnua, has already had great success using the Mixamo-Blender workflow. “We were able to integrate Mixamo with our Blender production pipeline quite easily; it has enabled us to add realistic motions to Tirnua five-times faster than if we were to animate by hand,“ says Barthelet. “Having access to the entire Mixamo collection of animations will be a huge benefit to us as we continue to build up the rich simulation world of Tirnua.”

“Mixamo is the first service to offer Blender users easy access to high-quality animations that can be customized and retargeted to any character in real-time,” says Mixamo Co-founder and CTO, Stefano Corazza. “With Mixamo, the Blender community can easily apply animations to any character in their 3D scenes by following a simple end-to-end workflow process that we developed.”

Blender users can bring Mixamo animations into their projects in several ways depending on their needs, using Collada or BVH format based workflows. Whether importing their Blender- created character models into Mixamo or creating rigged models on Mixamo with the Character Creator Suite, Blender users can customize their animations on characters of their choosing and then easily bring them back into their Blender project. Because Mixamo’s sophisticated service simplifies the character animation process through automated, real-time controls, Blender users save up to 75% in production times and 80% in costs.