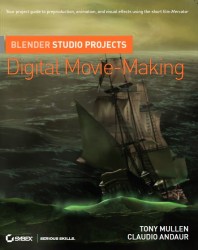 Months ago I pre-ordered "Blender Studio Projects" book, and a few days ago it arrived and I set about getting my reading head on.

Authors Tony Mullen and Claudio Andaur wrote this book under the Sybex Serious Skills series, meaning that it is not a beginning Blender users book. Tony Mullen has produced several books and is well known. Claudio Andaur works for Licuadora Studios and has also worked on Plumiferos (a feature film made in Blender). He is known as Malefico in Blender IRC circles.

The two authors combine their fields of expertise to produce this Intermediate/Advanced level breakdown of the various studio quality production pipeline processes, using multiple scenes from a short feature made at Licuadora Studio.

The end result being an understanding of the major tasks involved in making a short feature.

I think the book manages to work its way through the various stages very clearly and efficiently. Not dwelling too much on the little details most of the time, but when the small details do need to be described, they are.

I was especially impressed with the modelling section and the compositing sections, each gave a very clear and detailed description of the various tricks and time savers that help to keep a large production such as the one presented in the book on time and computer efficient.

One thing I did notice quiet a lot was the numerous references to other Blender books, so it would probably be very beneficial to have read most of the other Blender books out there before starting this one, especially "Introduction to Character Animation" and "Animating with Blender", I would also recommend reading "Blender for Dummies" if you are a beginner also.

Various Blender 2.5 features and changes are covered in brief throughout the material giving hints as to what to be expected when it is finally released. Although for the most part the version of Blender covered in the majority of this book is 2.49b specific using a custom build from Licuadora Studios.

Another highlight was the coverage of drivers using Python and how to leverage their power for various modelling and texturing effects. It was describe in a fair amount of detail and people interested in the Python side of things will find this small section of the book very interesting I would imagine.

It reminds me very much of Roland Hess's book "Animating with Blender", and that was a very good book also.

So all in all a very good new Blender book, well worth adding to your collection if you are interested in studio project productions using Blender.