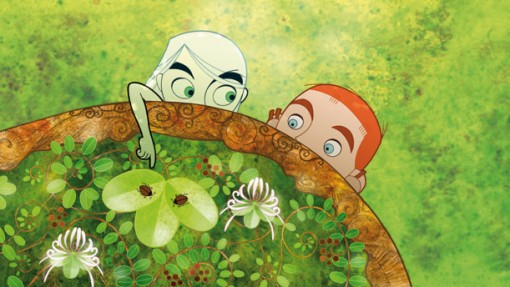 Tomm Moore’s ‘The Secret of Kells’, which has been partly produced in Blender by the Belgian studio Digital Graphics, has been nominated for an Oscar in the category 'Animated Feature Film'!

THE SECRET OF KELLS - OSCAR NOM!!!

Hey everybody! The amazing and beautiful film THE SECRET OF KELLS has just been nominated for an Academy Award for BEST ANIMATED FEATURE!!! KELLS is distributed by NYICFF distribution arm GKIDS - so this is a huge victory for the festival, for the filmmakers, and for everyone who supports unique, independent, artistic vision in filmmaking for families.

The film plays Feb 27 at 1pm, with a Q&A by director Tomm Moore following the screening.

Don't miss this OSCAR NOMINATED animated masterpiece from the producers of Triplets of Belleville! Magic, fantasy, and Celtic mythology come together in a riot of color and detail that dazzle the eyes, in a sweeping story about the power of imagination and faith to carry humanity through dark times. Young Brendan lives in a remote medieval outpost under siege from barbarian raids. But a new life of adventure beckons when a celebrated master illuminator arrives from foreign lands carrying an ancient but unfinished book, brimming with secret wisdom and powers. To help complete the magical book, Brendan has to overcome his deepest fears and venture into the enchanted forest where mythical creatures hide. It is here that he meets the faerie Aisling, a mysterious young wolf-girl, who helps him fulfill his dangerous quest.

"Stunning! A cascade of light, color and wonder burst from the screen!" - The Irish Times

"Holds the spectator in a waking dream from beginning to end!" - Le Monde