During Siggraph 2006 I met Jason van Gumster; many people know him as Groo or Fweeb (on forums ), who demostrated the fluid simulation capabilities of Blender. He runs a small animation and print design company (Hand Turkey Studios) in Richmond, Virginia and they use Blender for nearly all of their animation needs.

Q .1 What do you think about the open-source movement and when did you start using open source tools?

A) The first time I got involved with open source was in 1997; my freshman year of college. I started playing with Linux a whole lot and really liked the whole idea that anything can be done with it. Every aspect can be totally customized as long as you spend the time and have the knowledge to play with it. That's what I really dig about open source. As I did more creative work, I ran into applications like Blender, The GIMP and what-not. I found that they really did it for me; they met my needs. I'm one of those guys that was playing with Blender in the C-Key days (I'm fairly sure I used it before the keys, too, but my memory is getting rusty). At the time, I was mostly playing with it and didn't have really tight timelines, so I could have a lot of fun. I was also using other programs in my classes and it'd gotten to a point where I didn't want to wait to work in the labs and I didn't want to pirate the software at home (especially considering the fact that, by that time, almost everything I ran at home was Linux-based). Blender seemed to be the best solution for me and I've followed it very closely ever since then.

Q.2 What are some of the nifty and useful features in Blender?

A) I'd have to say Blender's best feature, to me, is its speed in the workflow. Once you figure out how it thinks, you can work very, very quickly. In my major focuses, modeling and animation, Blender allows me to work at a very fast pace. This is especially beneficial to me since the bulk of animation work in my area is for television where there are quick turnaround times. After that, I'd say Blender's open source nature is a very strong feature. Having the accessibilty to view the source code or use python and add to or change the program, either myself or with someone else's help is an invaluable benefit. It's like having your own in-house production tool, only better, because you're not the only one who's coding it.

Q.3 What are the features that Blender is missing?

A) I'd like to see more stuff for motion graphics and 2D animation; things you can do in, for instance, Toon Boom or After Effects. Now, I know it's not really Blender's fortÃ© (although I have managed to do a few nice 2D motion-effectsy things), but I'd love it if some of the ideas and features from those applications might be able to find their way into Blender some day. Perhaps camera settings that reflect those of a real-world camera would be nice. Also, I think being able to draw curves on the preview window to create a mask would be a great addition.

That said, I still wouldn't say it's anything Blender is *missing*, per sÃ©. Many of these things are currently possible with Blender, they just require a little bit of trickery and some old-school brute force.

Q.4 What other tools that you use for production work?

A) I do as much work using open source tools as possible. My operating system of choice is Linux. I use Blender for animation as well as some video work. More dedicated video work gets done in Cinelerra and Kino. I use The GIMP and Inkscape for 2D graphics and dvdauthor for authoring my DVDs (and I write my dvdauthor xml files using vim ;). I've done some small print layout projects in Scribus, but I do actually have to boot into Windows and use Adobe InDesign for larger layout projects like 90-page catalogs. Scribus, in my estimation can't quite cut it for that... yet. I'll also occasionally boot into Windows for testing or encoding video files into Quicktime or WMV. I can do a lot in Linux, but video encoding is one of those areas where things get finnicky.

Q.5 Which of the following are you most interested in (a)Modelling (b) Animation (c) Compositing (d) Rendering (e) Rigging (f) Game-Engine?

A) Animation is my passion. It's what I like to do the most and it's what drives me the most. Now, I'm interested in it all, and I'd especially like to do more with compositing and texturing. However, there's just something about seeing an object or a character that you made move. It may be that I'm very simple-minded, but for me, it's exciting and totally worth the processes of timing and keyframing and talking to yourself that you have to go through. I guess that's why I like doing hand-drawn animation, too.

Q.6 As a well versed blender user and some with project experience using blender, what advice do you have someone who has just been introduced to Blender?

A) Stick with it. Once you figure out the way Blender thinks, a lot of things fall into place. Since it was made to work fast, rather than learn fast, it's definitely a benefit if you can have someone who already knows Blender watching over your shoulder and helping you in person. The forums and IRC come a close second to this. Blender is unlike any other program I've ever worked with, but it's (for the most part) very consistent within itself. You'll find one day that you're no longer bashing your head on the interface and instead bashing your head on the creative side, trying to pick something to make but having difficulties because you can do just about anything.

Q.7. Can you talk a little about past, present and future projects?

that as a means of 'funding our fix' to do our independent work. So we'll use Blender for television commercials and animated logos and then turn around and work on shorts like the â€œCoin Trickâ€ animation that was in the 2006 Siggraph reel. Right now, I'm actually involved with a couple of these â€œside projectsâ€ and I'm pretty eager to see where they go. Perhaps we'll even have something done by the next Blender Conference.

I'm also becoming more involved in professional Blender training. We're working on some tutorial DVD's and have started offering a Blender workshop in my area. There are a few more things on the horizon in this regard, but I need to get some things straight to make sure they actually happen.

And I'm not sure if it qualifies, but I'm having a blast maintaining the gallery on Blender.org. There is some truly talented work being submitted each month and I get to see it first. I really enjoy it.

Q.6 Where do you see blender in 5 years?

A) To be honest, I'm not sure. I'm only certain of two things: 1) Blender is still going to be around (and better than ever) and 2) I want to still be involved with it and the community using it. 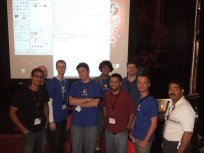