Hand Turkey Studios, an animation studio from Richmond, Virginia, have prepared the tag-on of their Firefox Flicks entry in Blender. The result is a professional animation that could reach a huge audience.

The idea was to get a good strong feeling of the fox moving around the globe. Since that requires a bit more depth than the actual logo gives us, we took a step down the z-axis and built a full 3D model of the Firefox logo. Once the model was done and painted to match the official Firefox logo, it was rigged, keyframed, and animated; swooshing by the camera as it circled the globe. A couple post-production tweaks, some sound (thanks, in no small part, to Roberto), and this part of our project was done.

On their website you'll find articles in which they explain the creative process behind modeling and animating the fox. 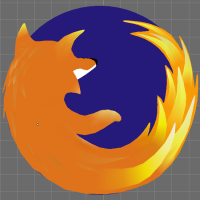 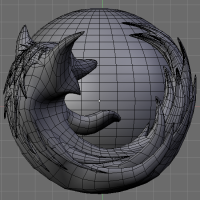 The video is available under a Creative Commons License. I'm not sure if the original .blend file is available as well:

For those of you not following the goings-on over at sheep-dot, Hand Turkey Studios is proud to announce that we will be offering a full-NTSC resolution version of our Firefox animated logo tag to all those who are interested in using it for their Firefox Flicks Ad Contest submissions.

We will be offering it under the Creative Commons Attribution 2.5 License, so it's very easy. For bandwidth considerations, though, we can't just post a link to the file. So, if anyone is interested in using this animation, we simply ask that you send an email to [email protected] We'll take care of everything from there and get you everything you need.

Update: Thanks for all the interest we've gotten for this! As a point of clarification, this gift is not limited to those entering the Firefox Flicks contest. Anyone who wishes to use this animation for their own purposes is welcome to do it. Simply drop us an email and we'll get you the file. Again, thanks so much for the kind words and interest.

The animation is well executed and they've managed to create a very good 3d representation of the Firefox logo. The only critique I have is that the part where the camera zooms out looks a bit awkward, but that may be due to the Quicktime compression.

This animation could potentially create a lot of attention for Blender! Thanks, guys :)

You can view only the tag-on, or the complete Firefox Flicks entry.