Johan Burell (Burre), one of the founders and lead programmer for the development team at Pixelknights announced on Elysiun that their game Origo: Prologue had the units and buildings (and some of the trailer) created entirely in Blender. Origo: Prologue is a realtime strategy game for the Zodiac PDA. I recently spoke with Burre about the game and how Blender was involved.

Who is on your development team that made this project happen?

The starting of the project was a mutual decision between the owners of Pixelknights, but the initiator was our Producer/CEO - Peter Horvath. The art department is resposible for all the graphics made by Blender, however it was I that recommended that we'd use Blender (since I had worked with it in the past and was aware of it's capabilities).

How long did it take to develop this game from concept to finish?

I'm not sure about the exact time, but if you would count the early stages of planning and research I would say about 18 months from startup to completion.

I saw from the Elysiun post that you used Blender and the GIMP. Any other programs that were vital to the project?

Depends on what you would consider vital, but I could mention some. We are big believers of open source software so we often look at those types of solutions, and it helps us keep development costs low. Some applications that have helped us: PalmOS Development Suite (based on Eclipse), Subversion version system, Apache web server, GCC compiler toolchain, Virtualdub (for the teaser trailer), Codewarrior, 7-zip and Gentoo Linux . So, yeah, quite a lot of opensource software. Also some in-house tools (mostly for game data). All 3D is made by Blender and all post-processing and 2D art are done with Gimp.

How was the decision made to use Blender?

In the early planning stages we looked at different solutions for both development and graphics to be considered when making investments necessary for the project. I recommended Blender since I felt confident that it could get the job done. Our artists are skilled and educated 3D-artists so it wasn't very hard for them to adapt to the Blender interface. Blender isn't really harder than any other software to learn, it is just different. And once you are prepared to start of with a clean slate I think the rest will follow quite naturally. Gimp was also a no-brainer. It is both versatile and powerful and it can be expanded with plug-ins and scripts if we need some custom tools/filters.

Any specifics in Blender that made it your choice program? Modeling tools, materials, etc?

The two most important factors were price (free) and the fact that we had some experience with it (wich cuts the learning curve drasticly as opposed to starting off with an unknown software). Personally I think it has a very appealing UI with just about everything you need accessible by hotkeys.

I asked Burre if he had a development screen shot of Blender in use, and he was kind enough to ask the art department at Pixelknights for one (which also has the reference sketch shown!): 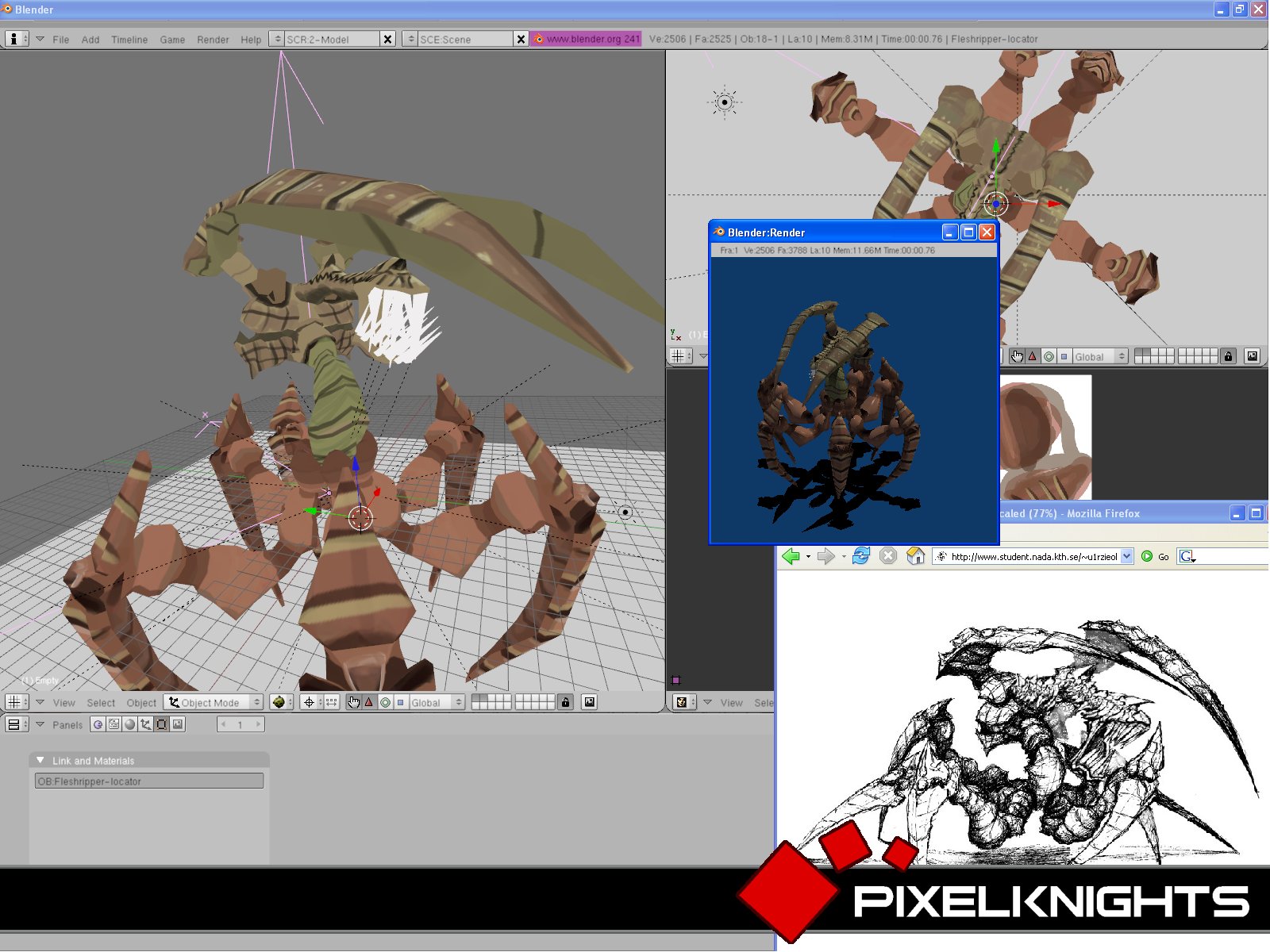 Click on the image for a high res view

He also discussed with me the how the workflow for in-game units works:

The design team and the conceptual artists together make up the unit design for the individual units. This can be a lengthy process with several iterations, depending on the complexity of the unit and it's place and function on the battlefield. Serveral aspects are considered: Conformance with the rest of the units in the same army, visual apprearence related to function, movement (both speed and type), weaponry, special abilities. The software developers are also somewhat involved during this and help's the design team to plan and approve unit abilities. When the concepts are starting to get finished they make a cleaned out final concept for the 3D-artists. They then take that reference into Blender. Since our target format is very low resolution (often 32x32 to 64x64) the 3D-artists don't focus on 100% resemblance with the concept but rathers works on enhancing the units characteristics to avoid it looking 'cluttered' in-game. Small details are often removed during this process and some details (like arms and head and such) gets oversized to be easier to see on the screen. When modeled, textured and animated, it gets rendered out frame by frame, filtered in Gimp, assembled to animation strips using an in-house tool, merged with a descriptor file for the animation (speed, duration, loops etc) with another tool and finally packed together with the other graphical resources and put in the game.

Now that Tapwave (the maker of the Zodiac) is bankrupt, will you be moving the game onto a different platform, or will all future projects be on a new platform? Any idea which ones?

We have a number of ideas at the moment but nothing I can share publicly right now. Announcements will be made in due time on our homepage. However, we are releasing the level editor for the game which will be available for download soon. In that, users can create their own levels, complete with scripts and all, wich will ensure that the Origo community will have new and interesting levels to play for a long time to come. Either with their own creations or by sharing them with friends.

It's great to see Blender being used for great projects like this. Origo: Prologue is compatible with Tapwave Zodiac and Zodiac 2 devices, so if you have one, get the game, and if you don't have a Zodiac, get one and watch Blender created gaming in action!