I'm Jessica Marrubini, and I'm a 3D Environment Artist working in the videogame industry since 2017 in Milan, Italy. I've been employed by small and big companies and had the opportunity to work on different projects, such as Racing Games with a realistic style and Hack and Slash with more fantasy themes.

I've always loved art in all its meanings, from painting on canvas to modeling clay and coloring ceramic, but my only desire is to imagine and create places or objects that don't exist. That's me!

A Christmas Eve is an experiment that I wanted to do to explore more of what Blender can do, being a 3dsMax user as I am.

My inspiration starts from the need to represent the atmosphere of my ideal place where I would like to spend my Christmas holidays, a warm room with a fireplace, lots of bright and colorful decorations, some artist's instruments and a little table ready for warm family times.

The atmosphere I wanted to create is defined by simple "iconic" objects, so I conducted research on forms and materials specifically used during Christmas time through Pinterest, Artstation, and the internet. 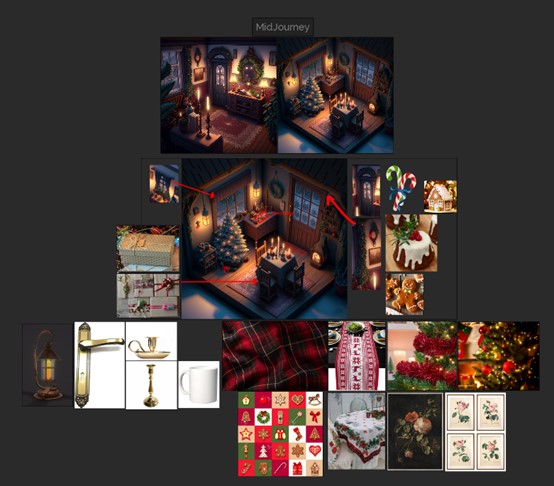 In order to have a first picture of the scene that I wanted to create, I used a program like MidJourney. I find this instrument very useful for a 3D Artist to get a good preview of the job, however, this doesn't substitute research and concept editing.

To finalize this project, I've used Blender, which is a new software experience for me.

In addition to classic 3D modeling using soft forms with the Subdivision Surface modifier, I wanted to try some new features such as Spline Modeling to place objects, Cloth simulation with Sculpt for increasing folds, Ivy Generator and Displacement. 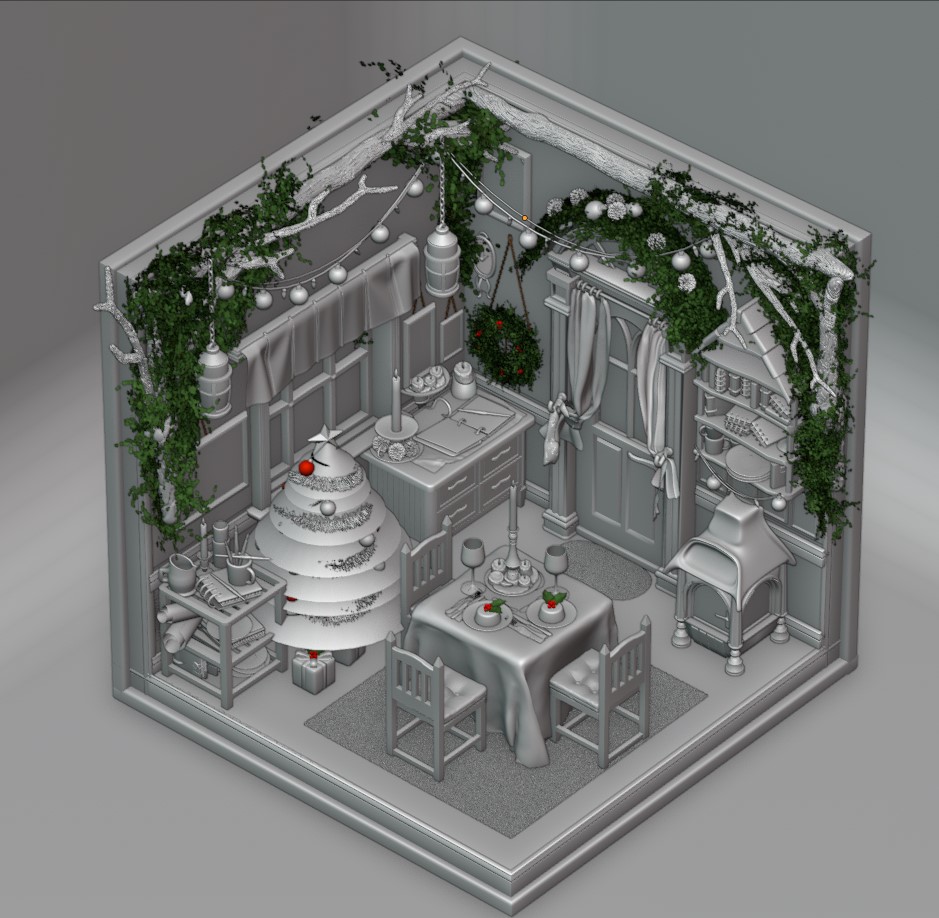 For the trunk and branches, I tried Blender's Sculpt for the first time, using mixed techniques.

On YouTube, I found an interesting tutorial that explained a different way to do it. Starting from a vertex in Edit Mesh mode (3 vertex collapsed from a plane), I extruded the edge and reproduced a spline to make a skeleton of my trunk. Then, with the Skin modifier applied, I was able to move and preview my little tree. 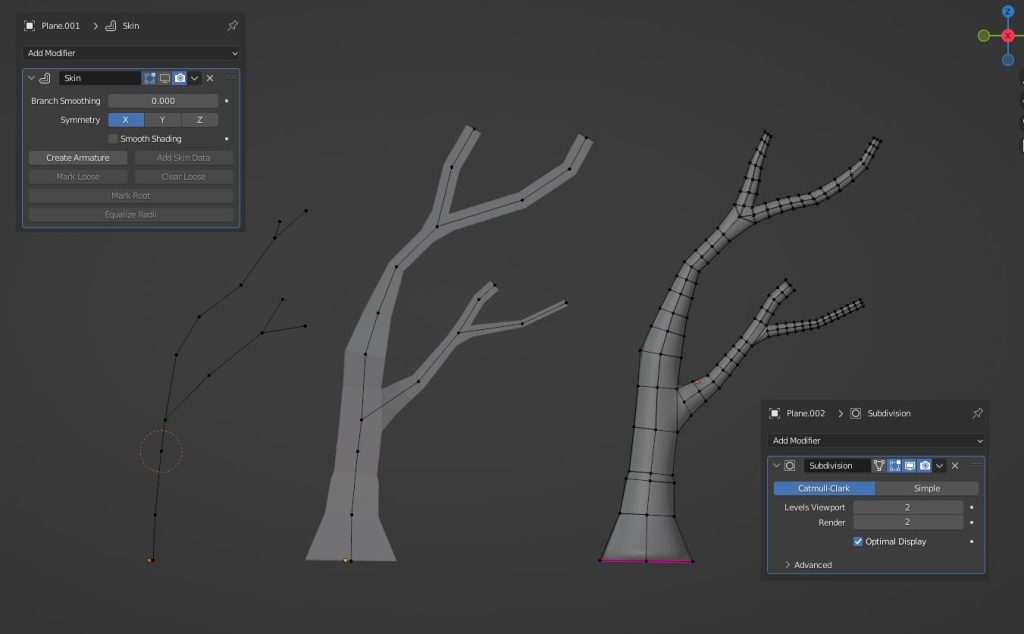 After collapsing all modifiers, remeshing, smoothing, and using a displacement, I was able to create a "chonky" and toon effect on my surface.

For this project, I used simple tiled texturing directly in Blender. For some assets like lanterns, I textured the "AO Effect" in Substance Painter for an increased toon light effect. I did the same for windows as well. 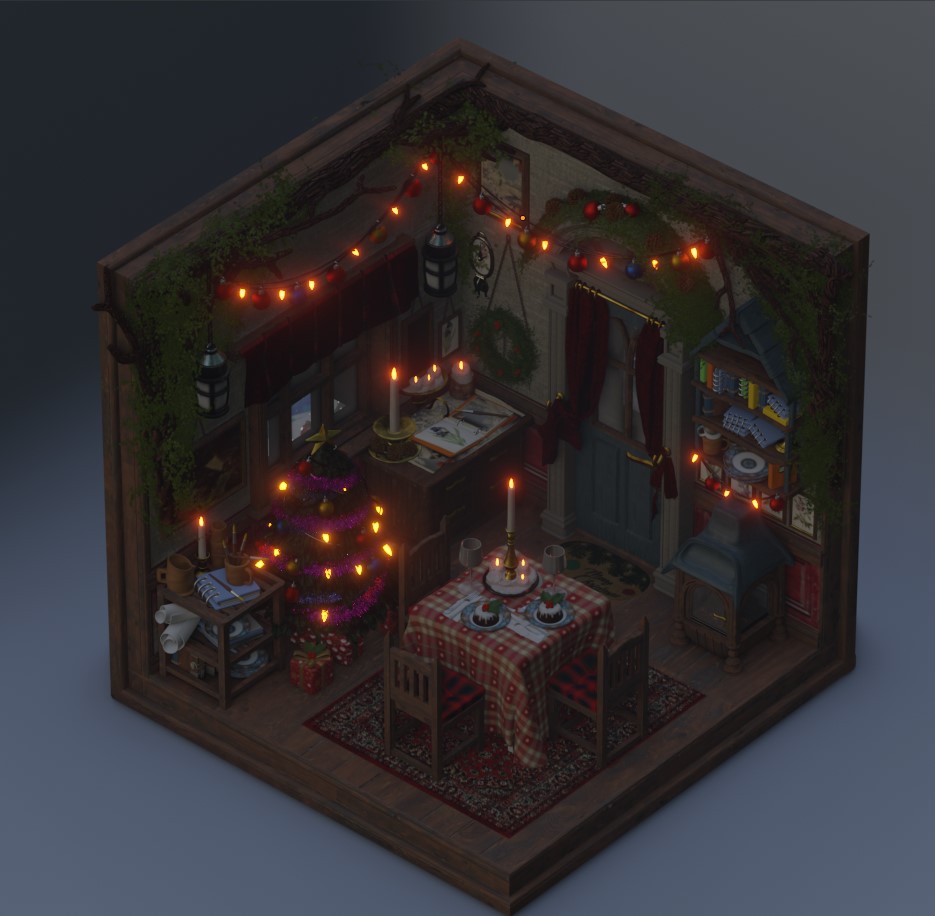 One of my main goals was to try to make a realistic effect of a carpet and doormat, so I decided to try with a simple procedural point texture as Displacement. 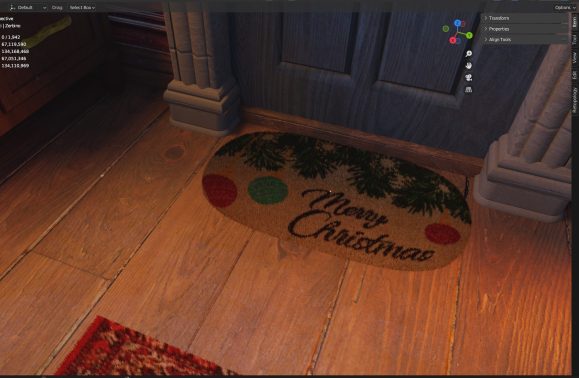 I found it easy to use in Blender, compared to using 3dsMax for example. 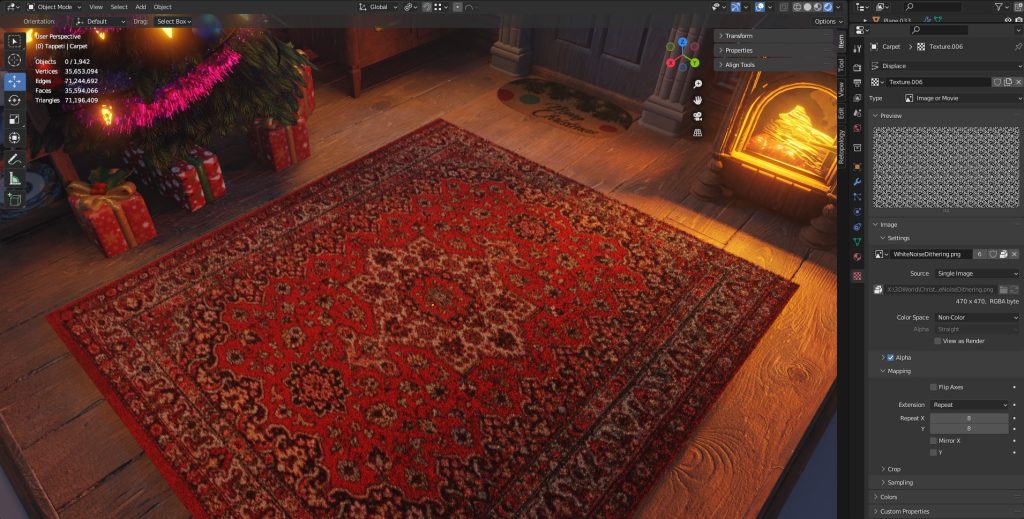 To obtain a smooth effect of shadows and light diffusion, I used a Fog Volume. The shader compiled of a Principled Volume with a Noise texture and a Map Range attached to it. 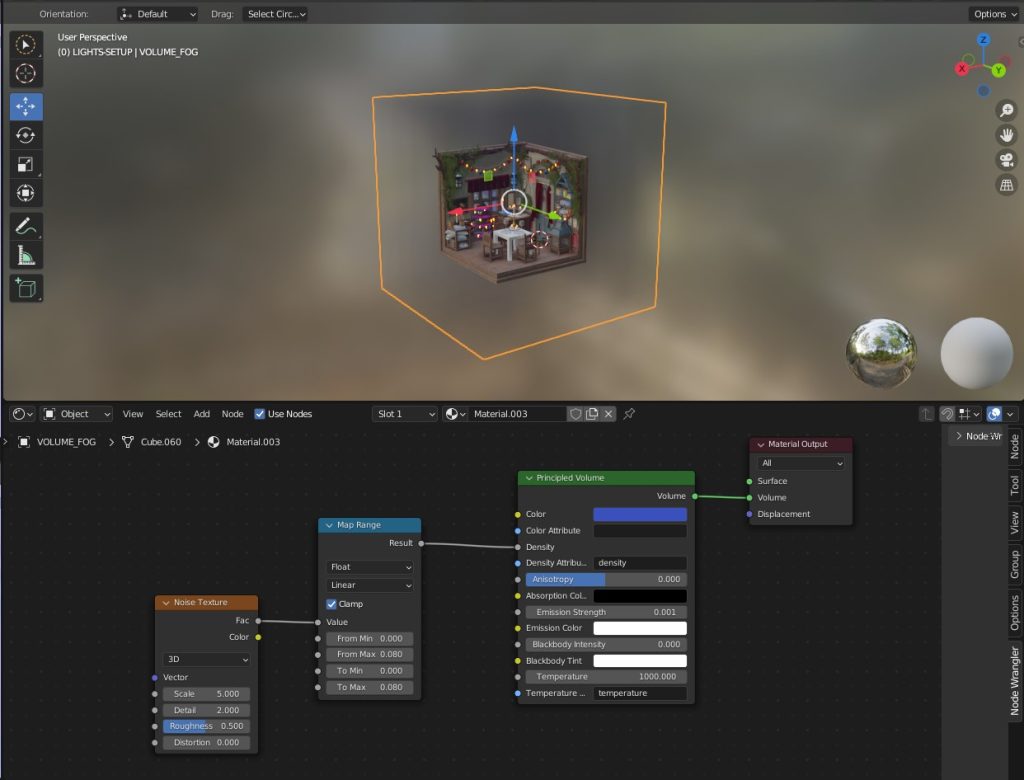 The light setup is composed of a principal warm spotlight that lights the room and two blue spots behind the window to simulate a snowy effect. Other lights and emissive lights are used to fill the dark parts.

In this setup, my main goal was to separate the two ambients, inside and outside, to make us feel more comfortable. 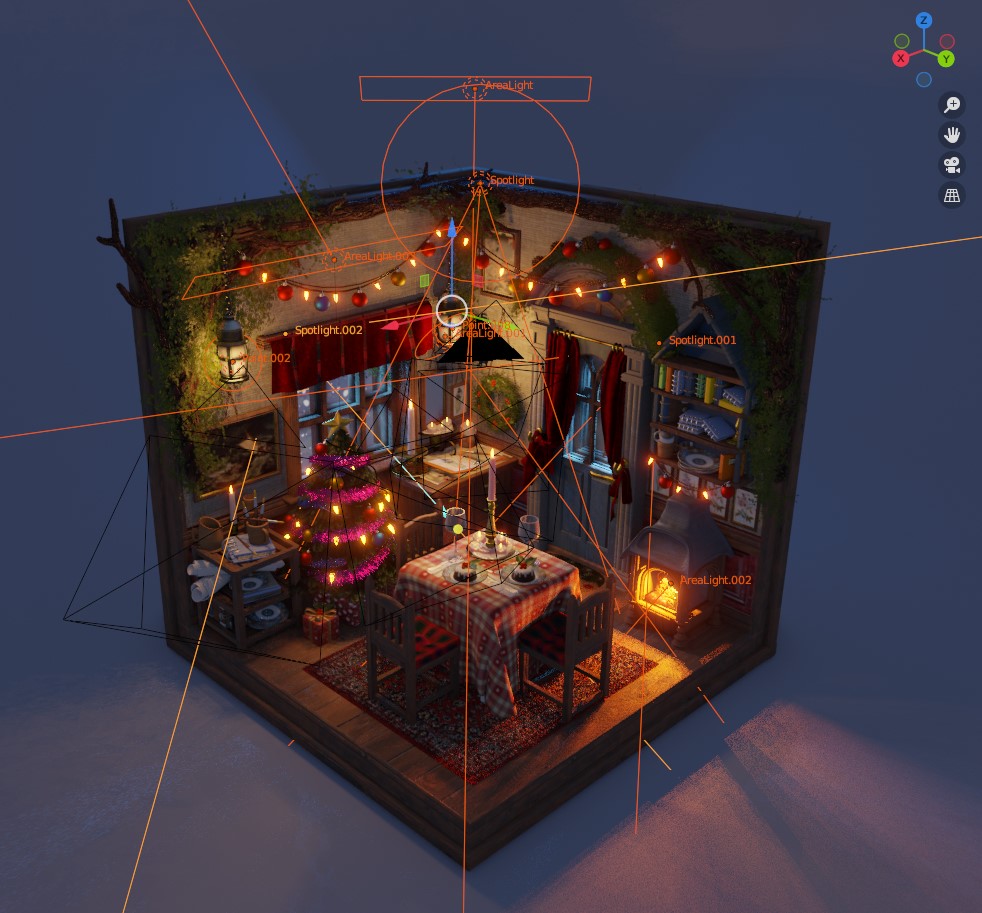 However, what Blender can offer with Eevee and Cycles rendering is incredible. My first rendering setup was based on Cycles, to have indirect bounces on surfaces and mirror reflections. However, when the project was full and complete, the scene was very heavy and emissive bloom had to be set up with external pass.

So I tried to use Eevee and immediately found peace with the laggy scene. I chose an Orthographic Camera because I was fascinated by these types of trending works, but it didn't satisfy me. So, I tried to replicate a similar effect but with a Perspective Camera. 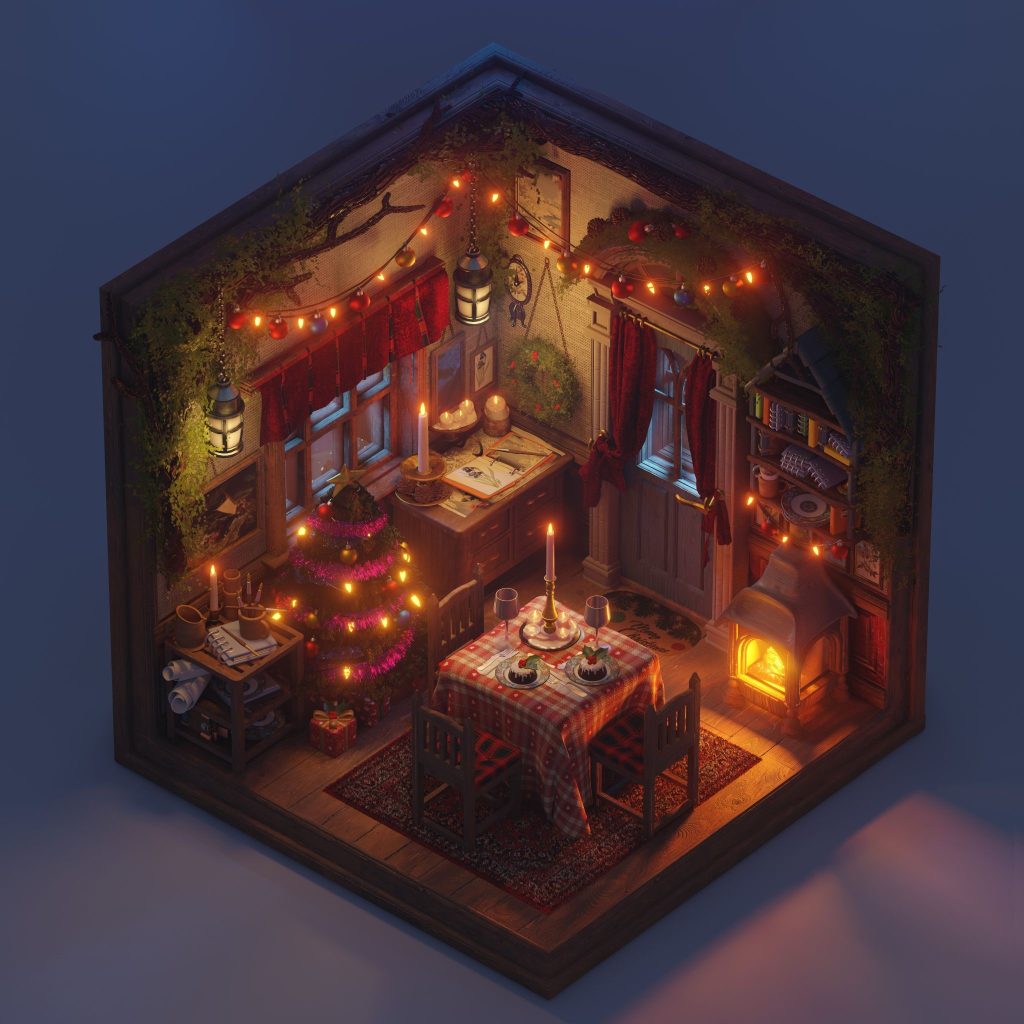 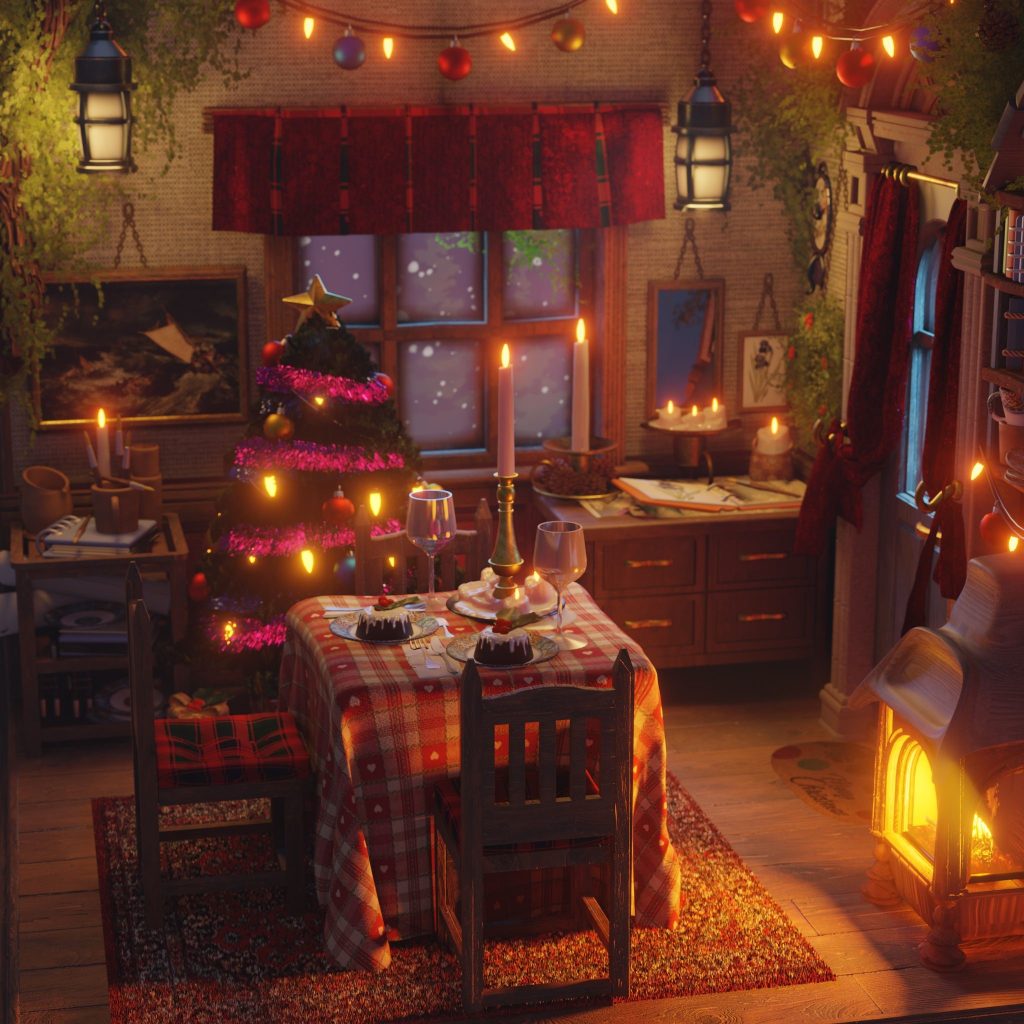 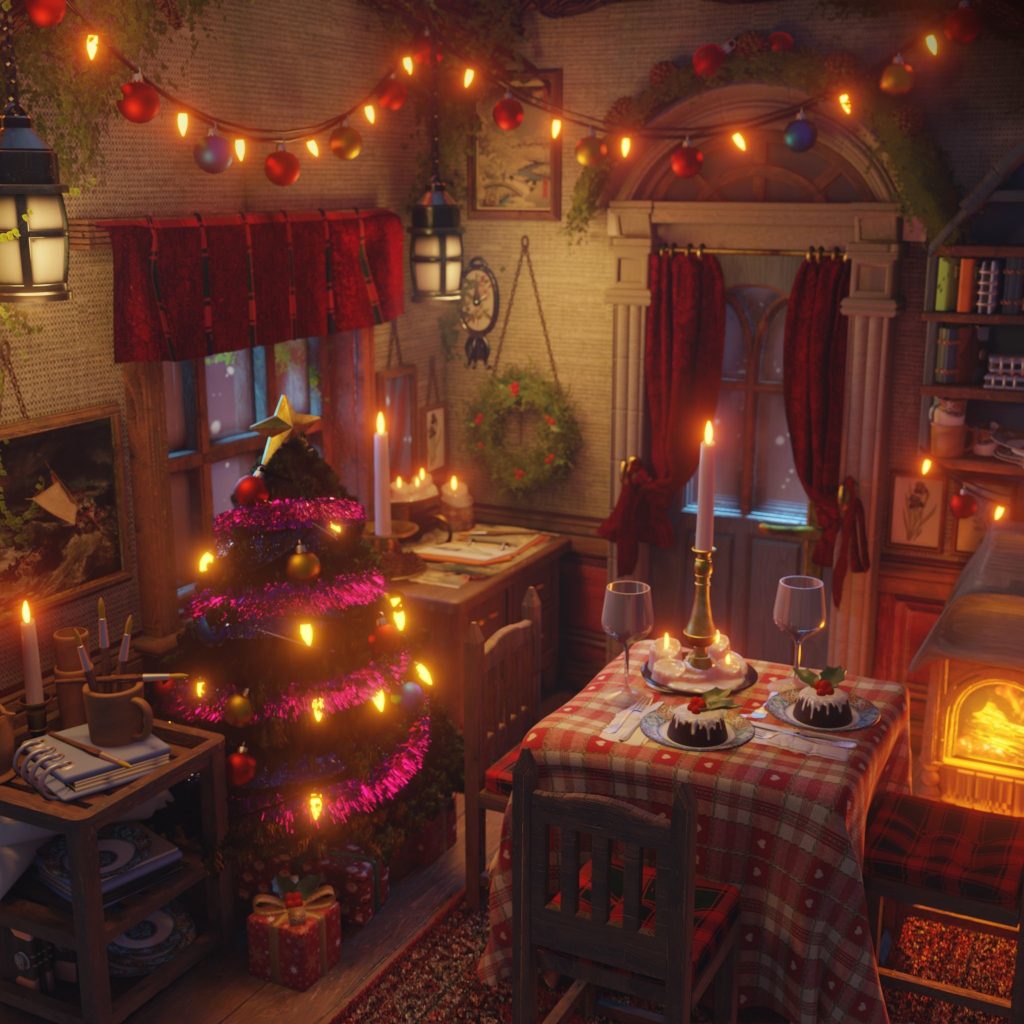 Thank you for reading my article and have a nice day! 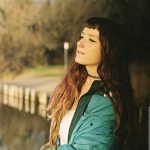 Jessica Marrubini, a 3D artist from Milan, Italy. She is currently working as an Environment Artist at Reply Game Studios. 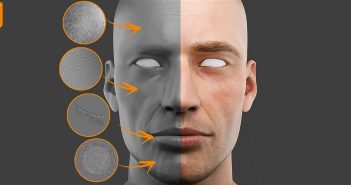 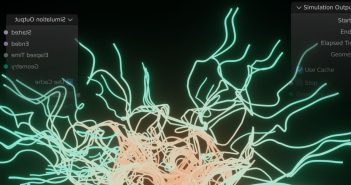