Hello everyone, my name is Vladimír Stáňa and I’m a 3D artist, currently living in Prague, Czech Republic. I started with 3D computer graphics during my studies at Business College. The first projects I created were mainly done in Blender and in time being, I started to focus also on other software like ZBrush, Substance Painter/Designer and Marvelous Designer.

Currently, I’m working as an environment and prop artist in a company focusing on virtual reality.

Inspiration for this image came from my childhood, when I used to play old adventure RPG games. I loved isometric games like Fallout, Baldur's Gate, and also adventure—Broken Sword, Black Mirror and many others. When I gained more experience, I decided to create my own adventure game :) Old Tomb is only a small part of the project I'm currently working on.

For the scene, the following software were used:

Before the start of every project, I look for some references—mostly pictures/photos from image sources like Google Images, Pinterest or various free imagebanks (Pixabay etc.) Artworks from other artists are also a great source of inspiration. 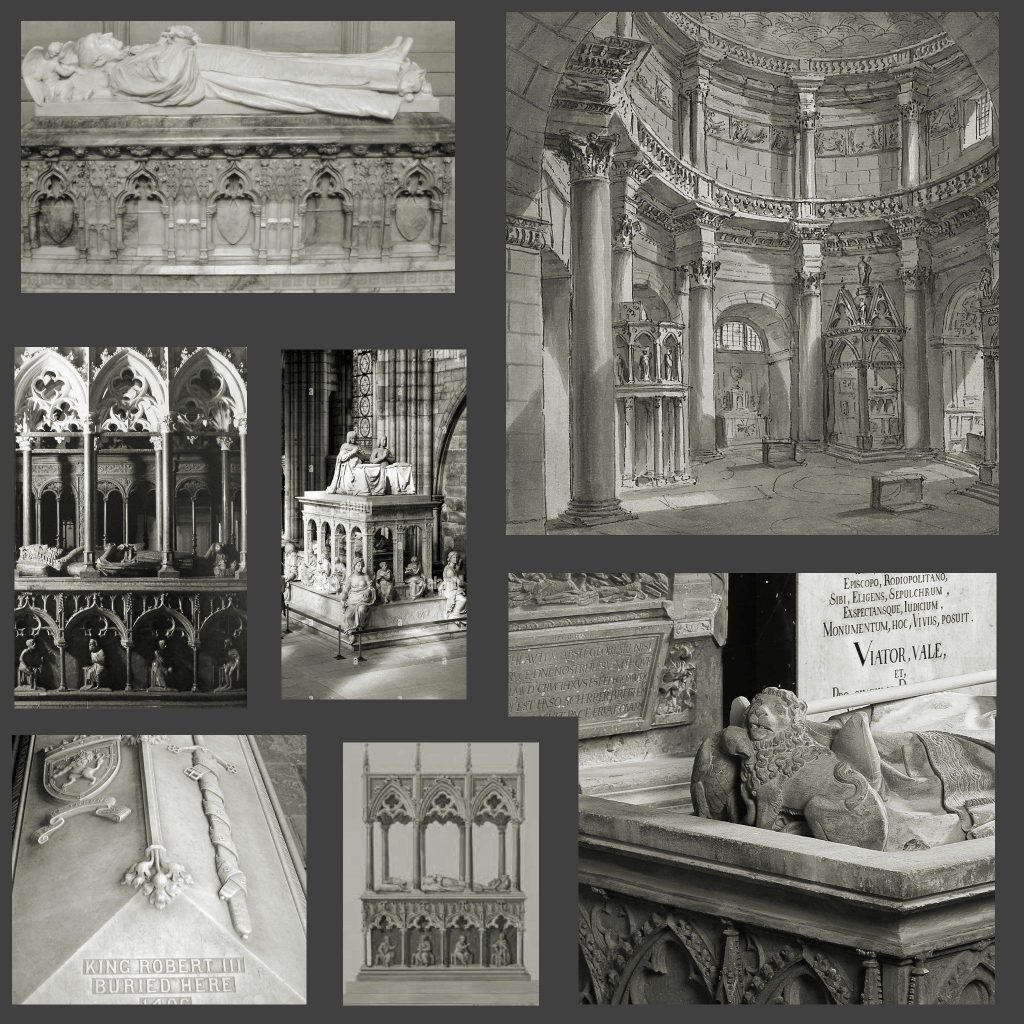 When I found suitable references, I made a rough concept and started to build basic assets. The statues and the coffin in this image were the first things I focused on. I started to work on human base meshes in software MakeHuman and when I was satisfied with the result, I imported the .fbx files with armatures into Blender. The figures were posed in proper composition and I did some corrections on them with sculpting tools. The clothes on the statues were made with the help of cloth simulation and a little bit of sculpting, while hair was made with curves.

I didn't make many details on the statues/coffin because the images were rendered from a distance and I could spare some time for other things.

The next step was to create low-poly models. For this, I opened ZBrush and used a tool called Dynamesh which can merge several objects together in one mesh (In Blender, you can use a similar tool—modifier Remesh.) At last, I used the plugin Decimation Master to lower the polycount as much as possible and I imported the result back into Blender for UV unwrapping.

With prepared high-poly and low-poly meshes, I used Substance Painter to get some stone materials for the sculptures. 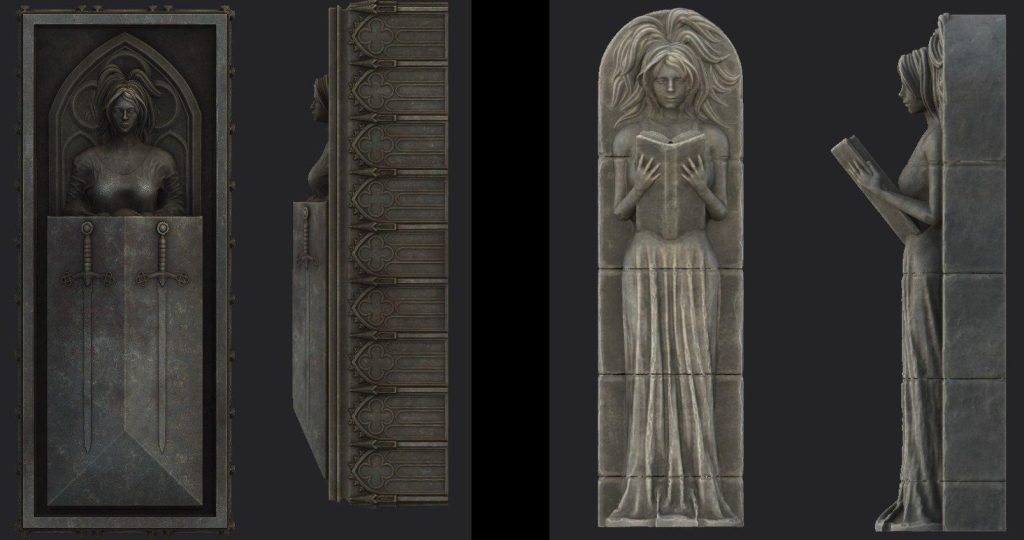 Robot and Detective are characters that I made for the game earlier. The creation of those characters was hard because they needed to have clean meshes for animation, specific materials for skin and such. 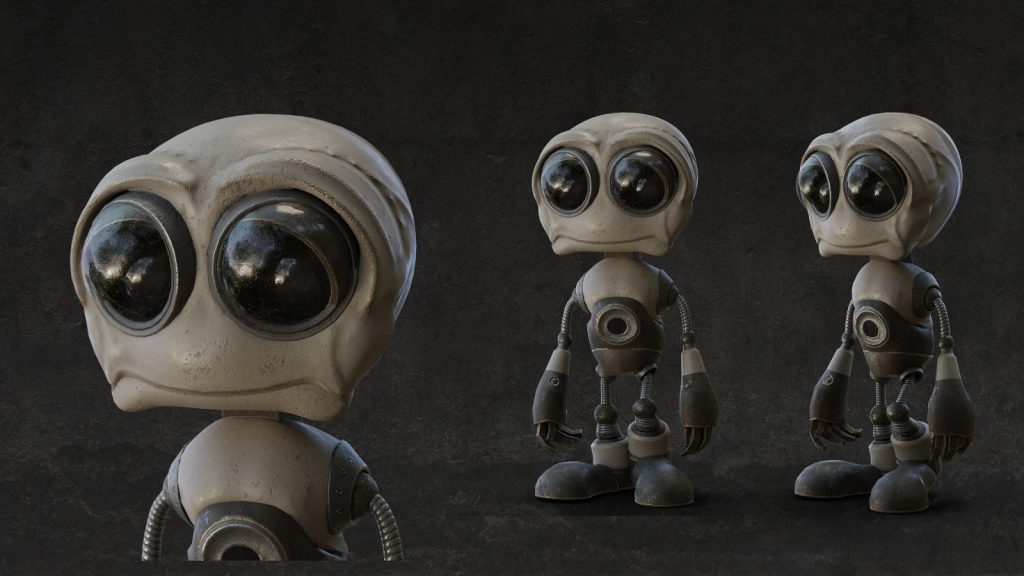 The hair and the beard were also time consuming. 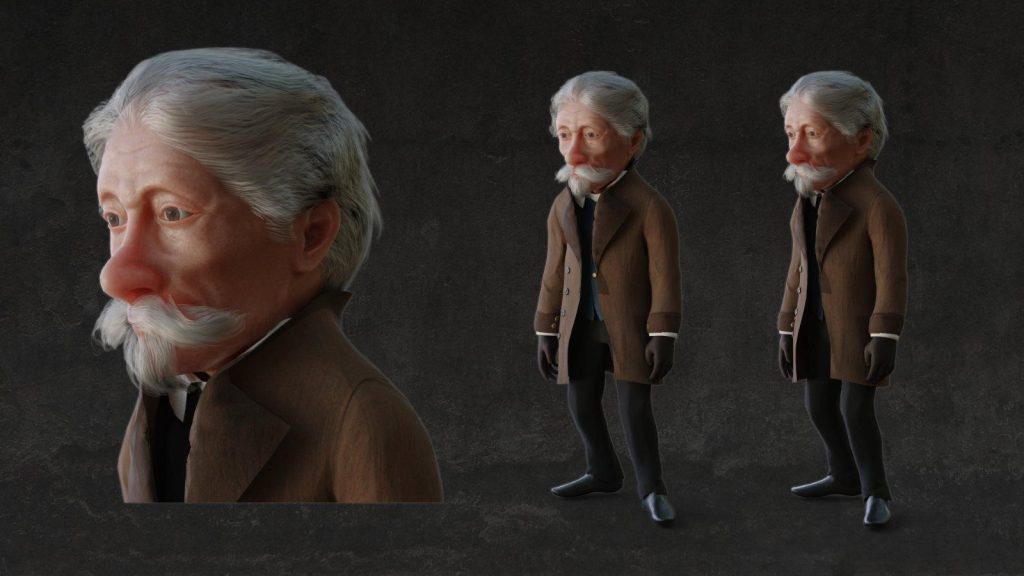 All the other assets were simple and I made them quite fast. It wasn't necessary to use external programs for texturing them, so I made only quick unwraps and used seamless textures from the internet to create the latest materials. 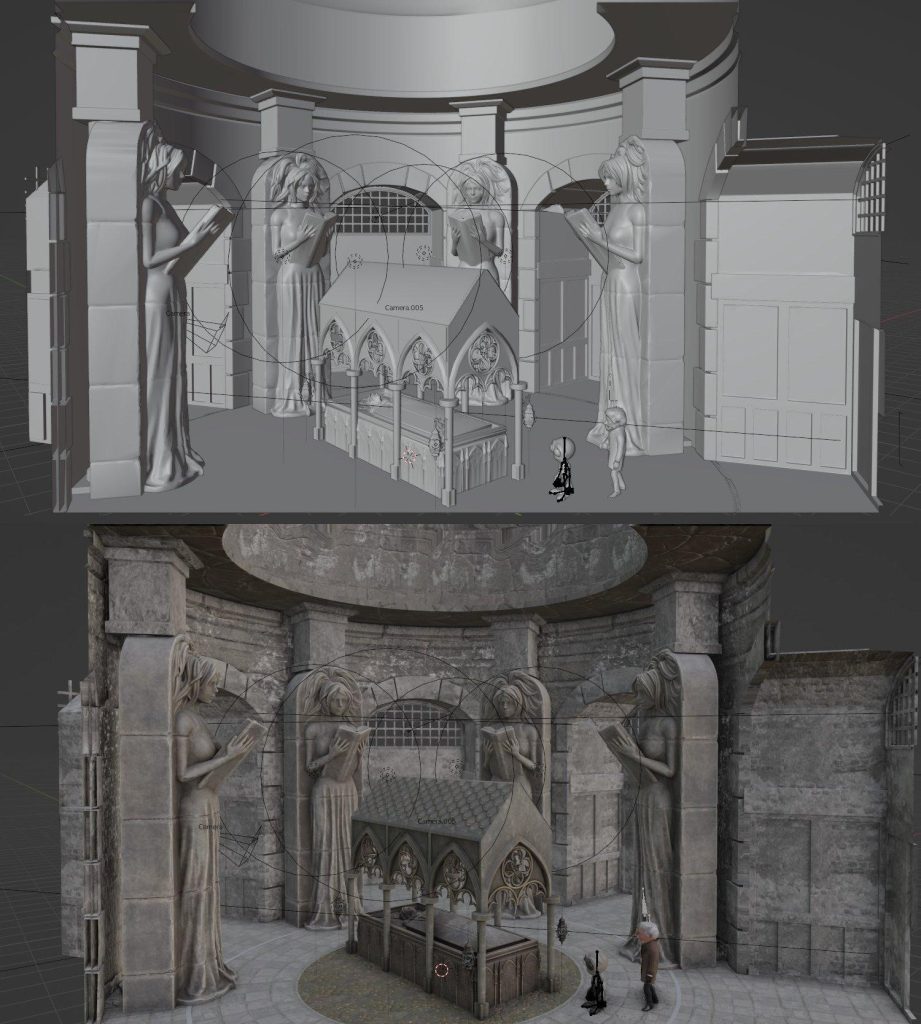 When all the models were done, I started to make the lighting,

In the scene I used the following lights:

At the end, I added an object with principled volume shader (with smaller density) which gave the lights a small “halo” effect.

For drawing images, I used cycles render with 2048 samples, denoising and GPU rendering. 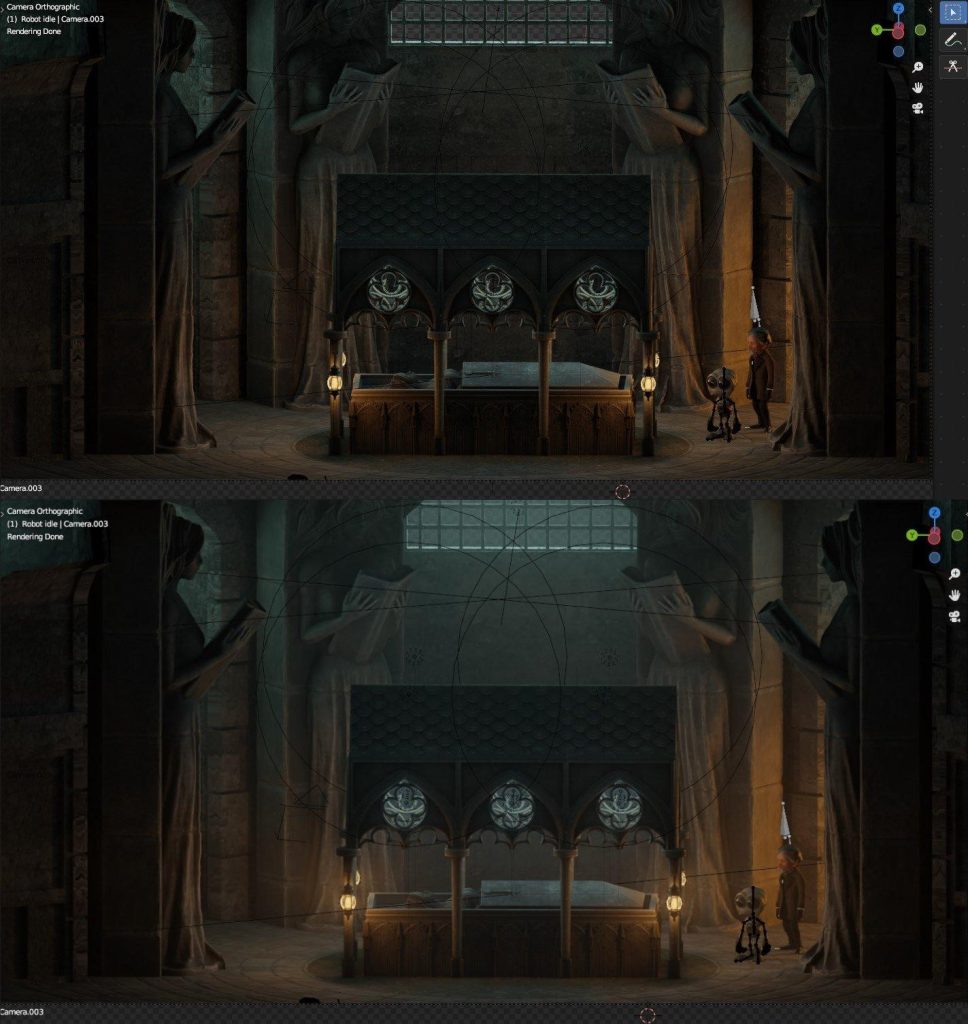 Finally, I used the program Affinity Photo. Color grading was done there with help of LUTs and levels correction and at the end, I sharpened the images and cropped them in desired composition. 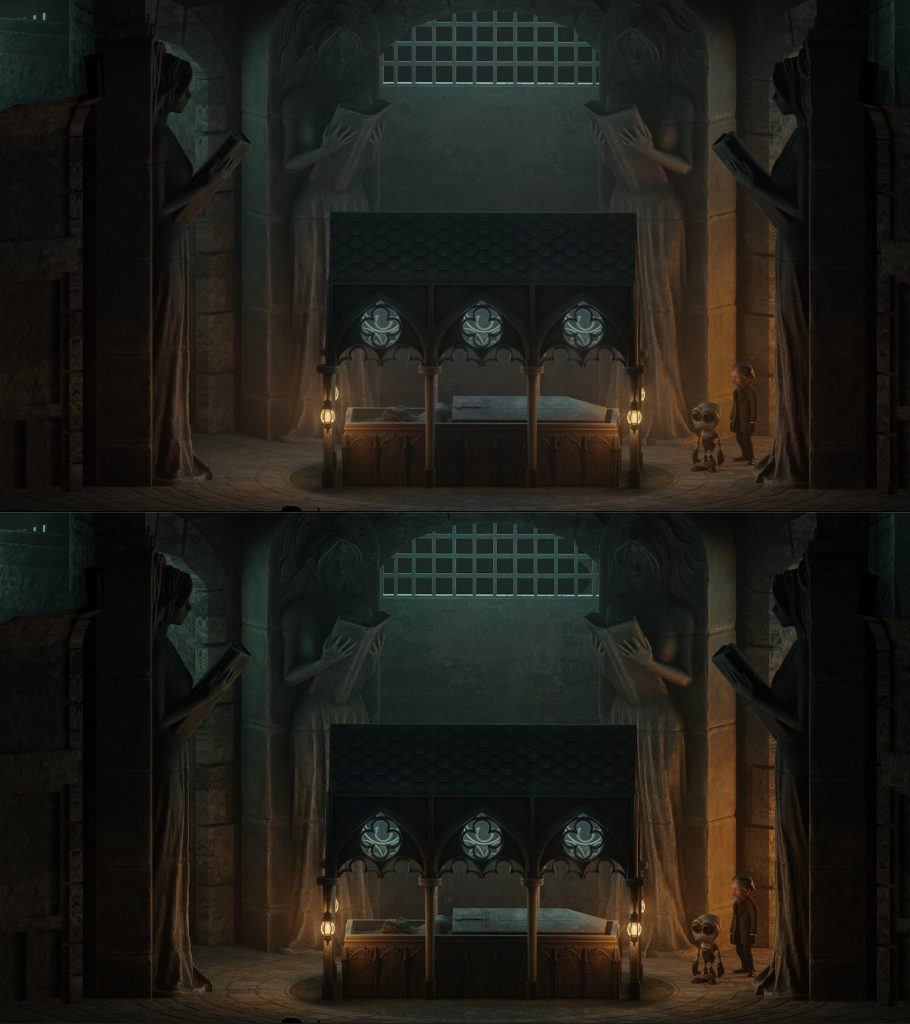 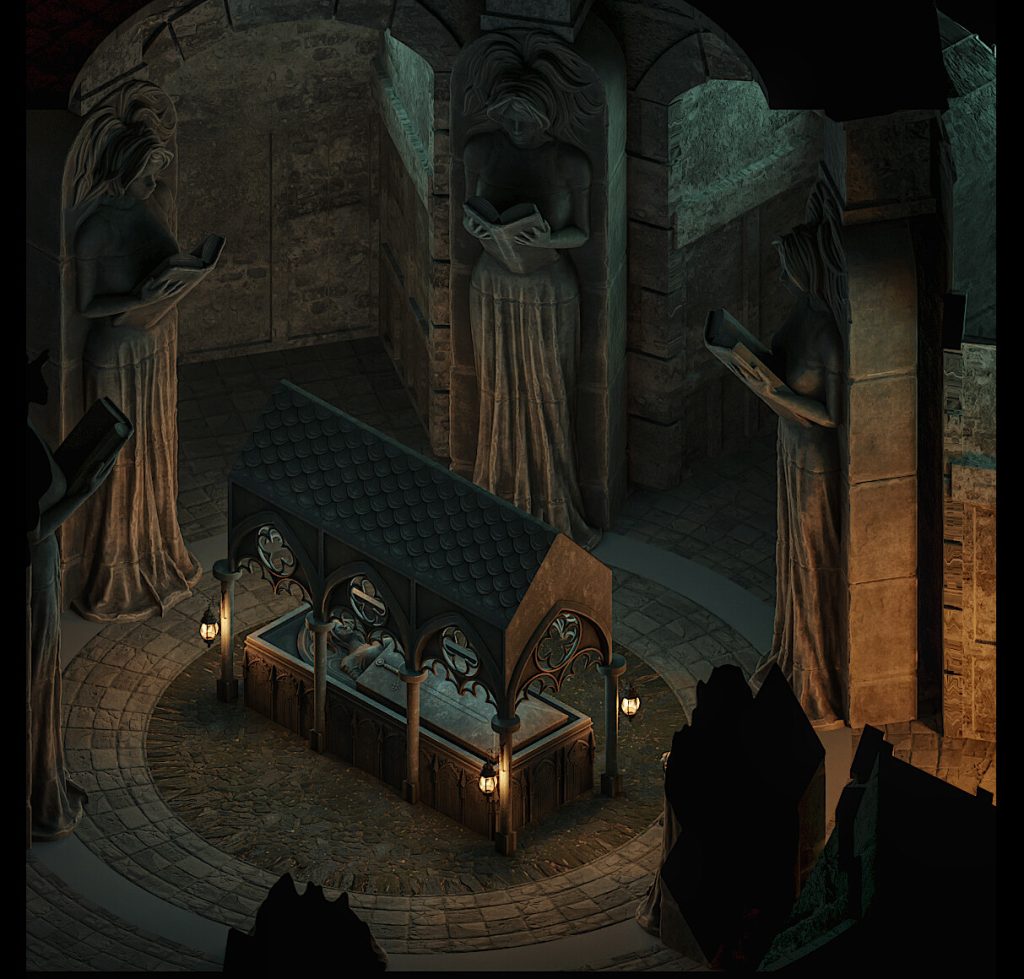 That's all! I hope you like my artwork and find this article helpful in some way.

You can find more of my work on ArtStation. Thank you for taking your time to read! 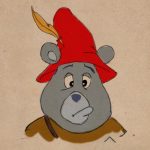 Vladimír Stáňa, a 3d artist from Czech Republic. He is a dreamer and a lover of books and video games. Currently working in a company focusing on virtual reality. 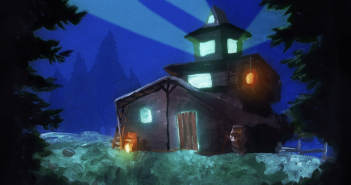 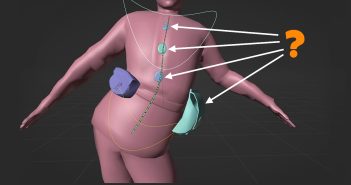