Hi, I’m Juliestrator, but you can call me Julie. I’m a 3D artist and a beginner game developer. I started my professional journey in the summer of 2020 when I decided to finally pursue my long-term goal of making games. That’s when I changed the focus of my Twitch channel from gaming to 3D, and later, game dev. There, I’ve been documenting my learning journey ever since.

For the past 2 years, I’ve been primarily using Blender for most of my 3D modeling needs. I love the idea of having all-in-one software that allows you to get great results without having to switch between a bunch of different programs. The only thing Blender is still lacking for my workflow is some flexibility in terms of texture painting. That’s why, for making game-ready textures, I use Substance Painter and Substance Designer.

Having studied architecture at university, I didn’t have any programming experience, so I had to start from scratch when I decided to get into game development. I started learning programming fundamentals with JavaScript but quickly realized I wanted to dive right into making games, so I switched to C# and the basics of Unity. I made 3 tiny games that were 1 level long, and I even had a chance to participate in a Ludum Dare game jam, though mostly as an artist.

In 2021 I got fascinated by those magically animated environments made in Unreal Engine, so I made a decision to try UE5. I made the tiniest possible game in 3 days using UE5, and I got instantly hooked. I even made a YouTube video about it!

Since then I added 2 more levels to my tiny game and started working on a new one - a hidden objects game inspired by the game, Hidden Paws.

This piece started as a sketch for last year's Inktober. The prompt was “spirit”. Initially, it didn’t get me excited, because the only thing on my mind was your typical cute ghost in a bed sheet. There’s nothing wrong with that idea, but it just didn’t resonate with me at the time. So, I went to the place most artists go in search of inspiration - Pinterest. A quick search of the word spirit and I found it! Nature spirit, of course! I instantly remembered that there was a piece of media that I adored which is full of spirits - Ghibli movies! A couple of sketches later I got this: a little mushroom spirit hanging out on a log. 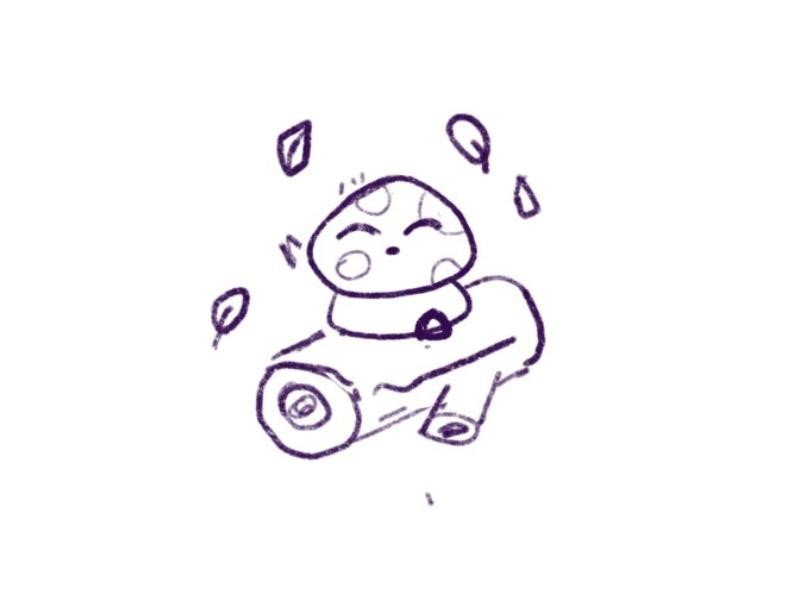 Originally, I was planning to make it as a part of my speed modeling series, so I wanted to spend just 10 minutes per Inktober prompt.

Here is what the result of the first 10 minutes looked like. This was made out of 2 cylinders and 2 cubes. I got the proportions that I was happy with, remeshed the log to connect the branch to the trunk, and sculpted the surface details to get the magical stylized mood I was going for. 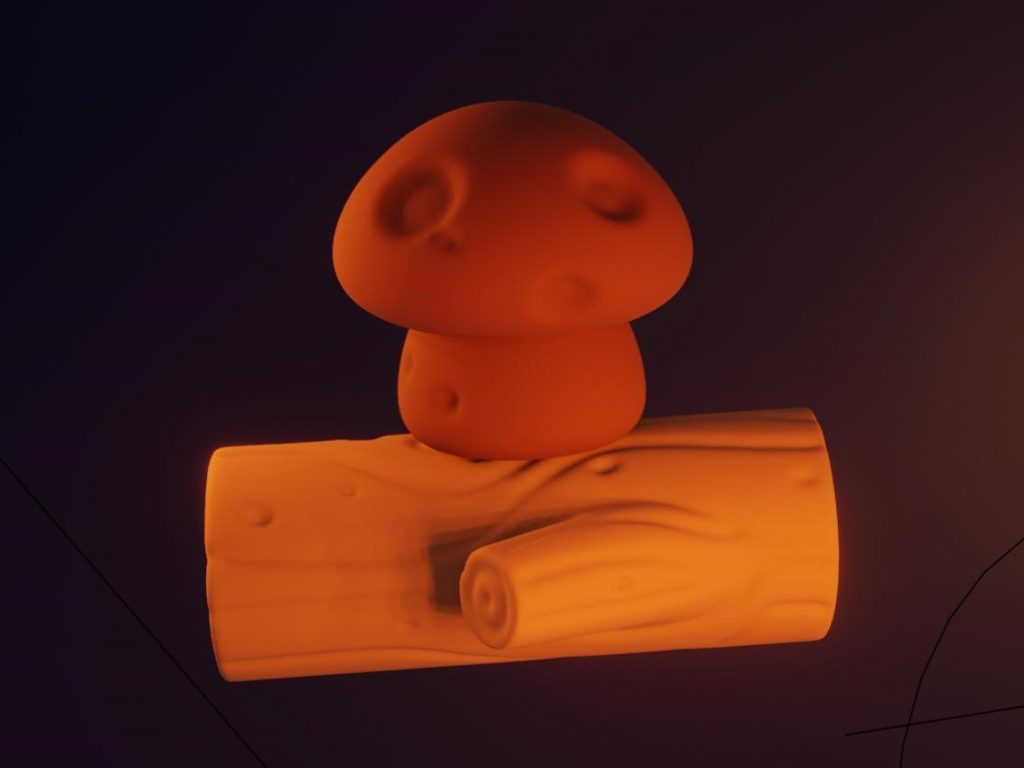 While speed modeling, you have to prioritize getting the general shape to look recognizable. Bonus points if you make a good base topology-wise, then you can always take an extra 10 minutes to add the details. Or you can even like the idea so much that you decide to spend an extra 5 hours on it. That is exactly what happened in this case.

The main reason why I wanted to take extra time with this piece is that the result looked like it was just a regular “mushroom on a log”; it wasn’t a spirit that the prompt asked for. So, the first thing I wanted to do was to add the magic from the original sketch.

It was time to transform a regular mushroom into a mushroom creature. Luckily, in the first 10 minutes of modeling, I was sculpting the details on the mushroom over the Multires modifier and not the Subdivision Surface one, so removing them was easy, because I went with a nondestructive method to begin with. 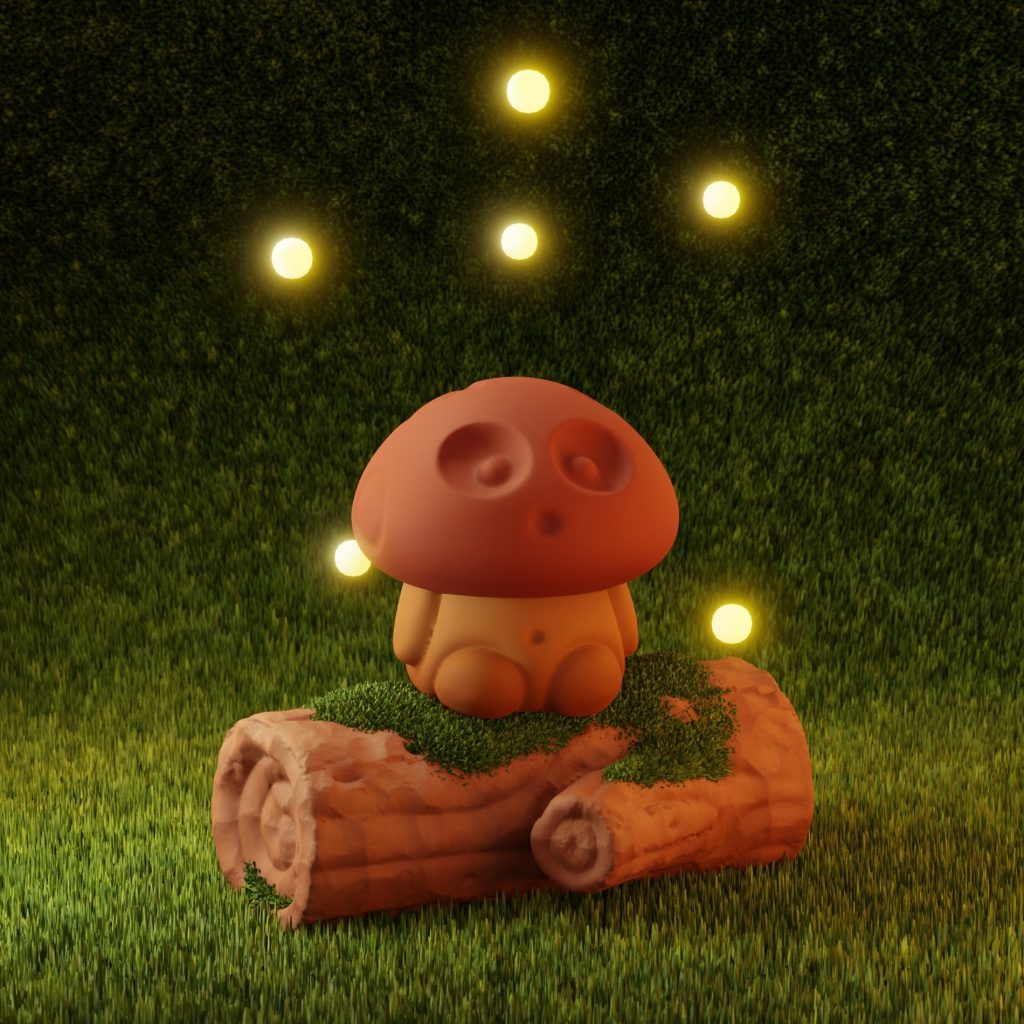 I wanted to get the simplicity of the original sketch and a toy-like look, so I added some grooves around the limbs and inflated the feet a bit. Oh, and I added the belly button; you can’t forget a belly button if you are making something cute and chubby! :) Initially, I sculpted the eyes, but later I decided to add giant spheres in their places instead, because the bigger the eyes, the cuter something looks in my experience.

For a forest spirit, it was missing some greenery. So, I added some grass by copying a top part of the log and inflating the parts where I wanted the grass to grow.

I added some spikes using the Displace modifier and Clouds noise textures like so. Later, I used the same technique to make the whole meadow in the background. For some color variation, I added some grass texture from the BlenderKit add-on. This is not a great way to make grass for games of course, but for something that you know is going to be just an illustration, it works well. 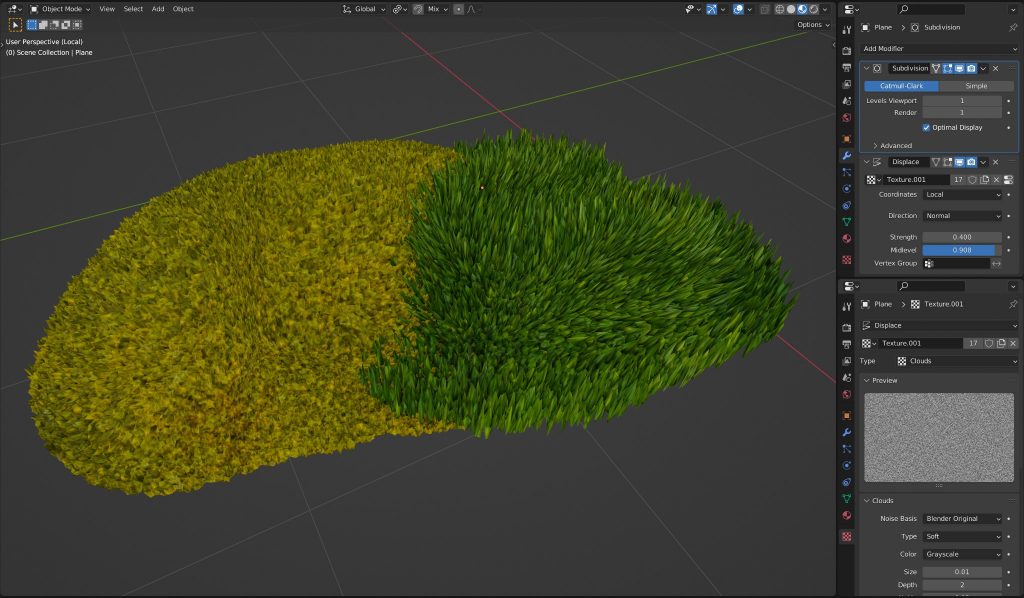 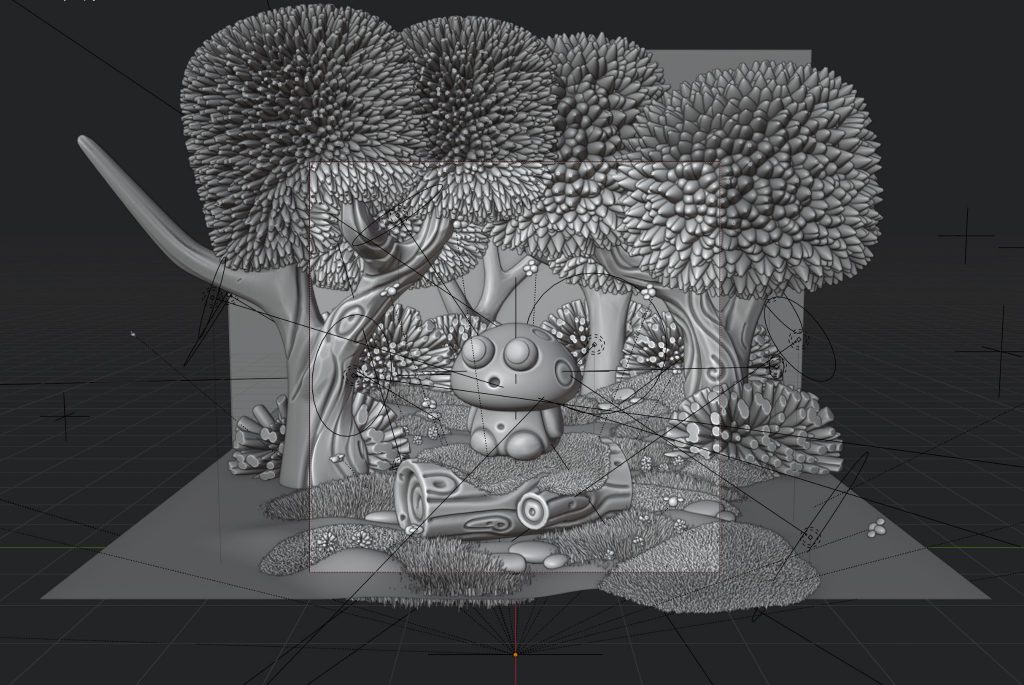 I used the same “displace” technique to make the bushes, flowers, and crowns of the trees, but this time with a Voronoi texture. The other difference is that I added an Empty to control the size of the spikes. 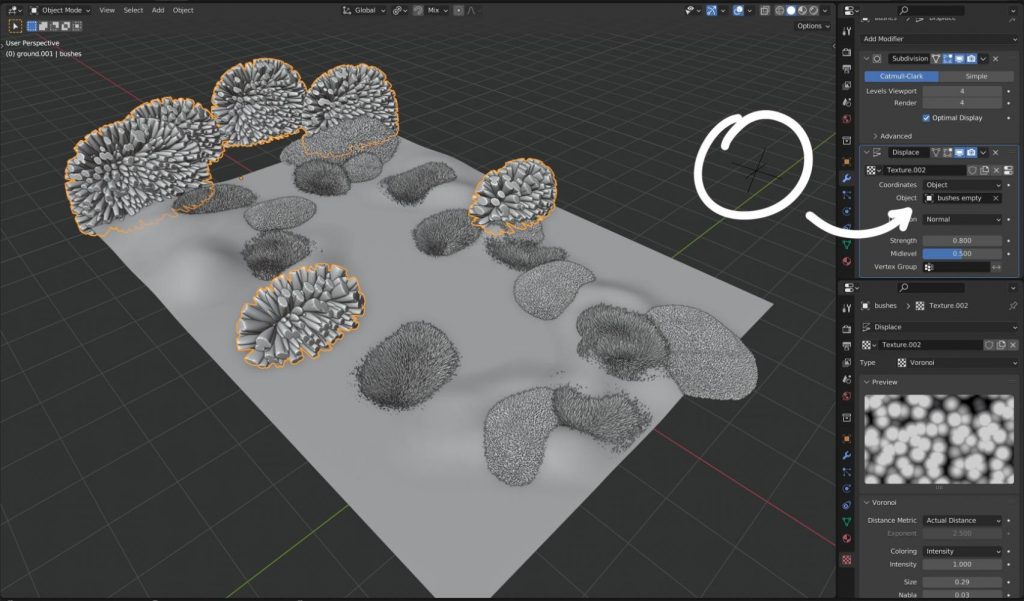 Here is what it looks like if you scale the empty up or down:

I always make tree trunks the way Polygon Runway does in his videos. I extrude a vertex until it looks like a tree trunk, add a Skin modifier, adjust the width of the branches (ctrl + A), and then, depending on the level of detail, I decide if it needs a Subdivision Surface modifier (ctrl + 1). Later, I sculpted some surface details on the trees as I did on the log.

Up until this point, I had done nothing in terms of lighting except for adding a basic RGB light and emissive fireflies, so the image was looking very flat. The character was getting lost in the background. Usually, I make sure to separate the foreground from the background using contrasting colors, but since this is a forest scene where most of the colors are shades of brown, yellow, and green, I had to do it just with lighting this time. 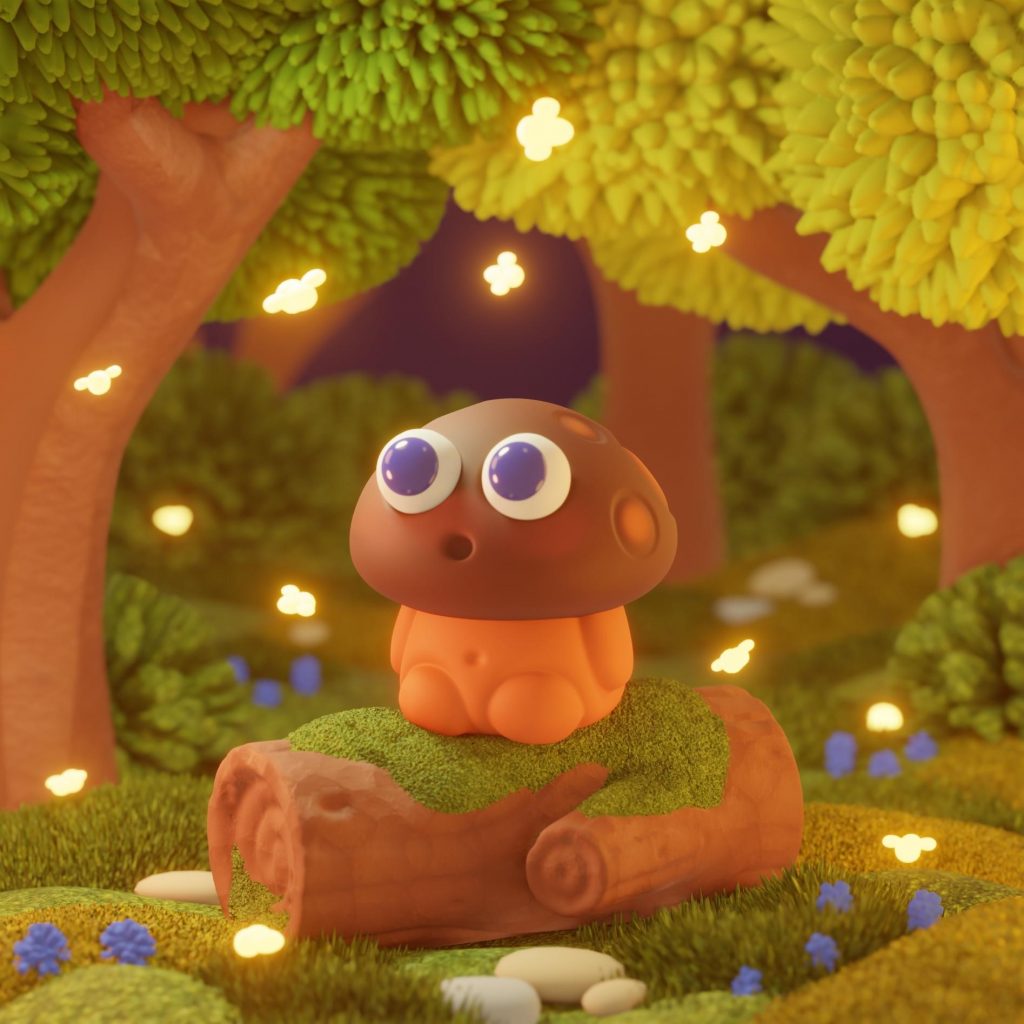 Here are all the lights I ended up adding to the scene. There are 10 of them. I’m rarely adding lights that come from visible and logical light sources that exist in the world of the piece. I use the light as a tool to guide the viewer's attention, so I add as many lights as needed. I care more about what the result is gonna look like vs having the lighting setup in a logical sense. 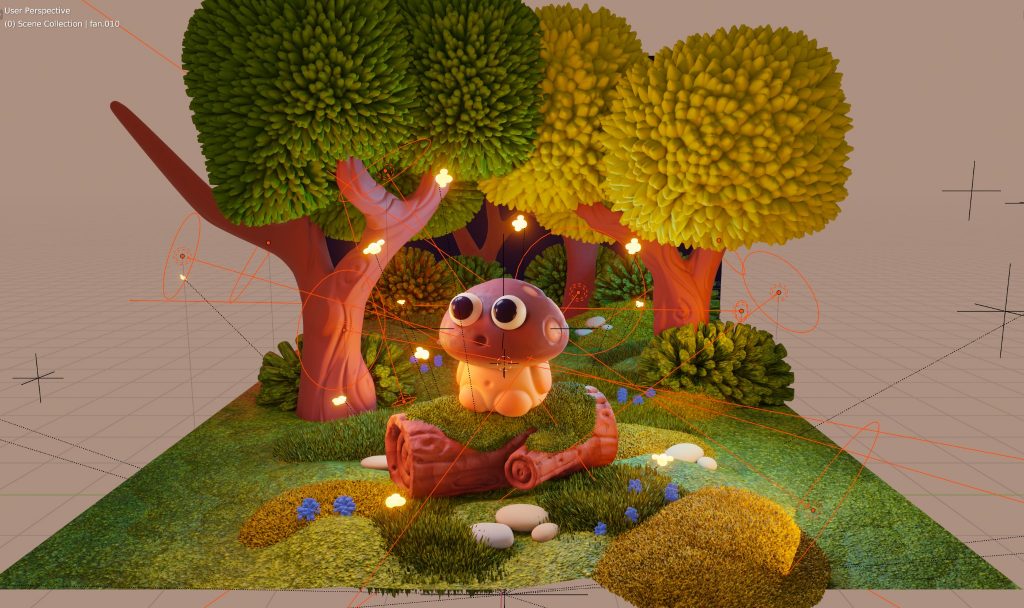 Here is a clay render with no color except for the color of the lights. I think it helps to show what the purpose of each light is. 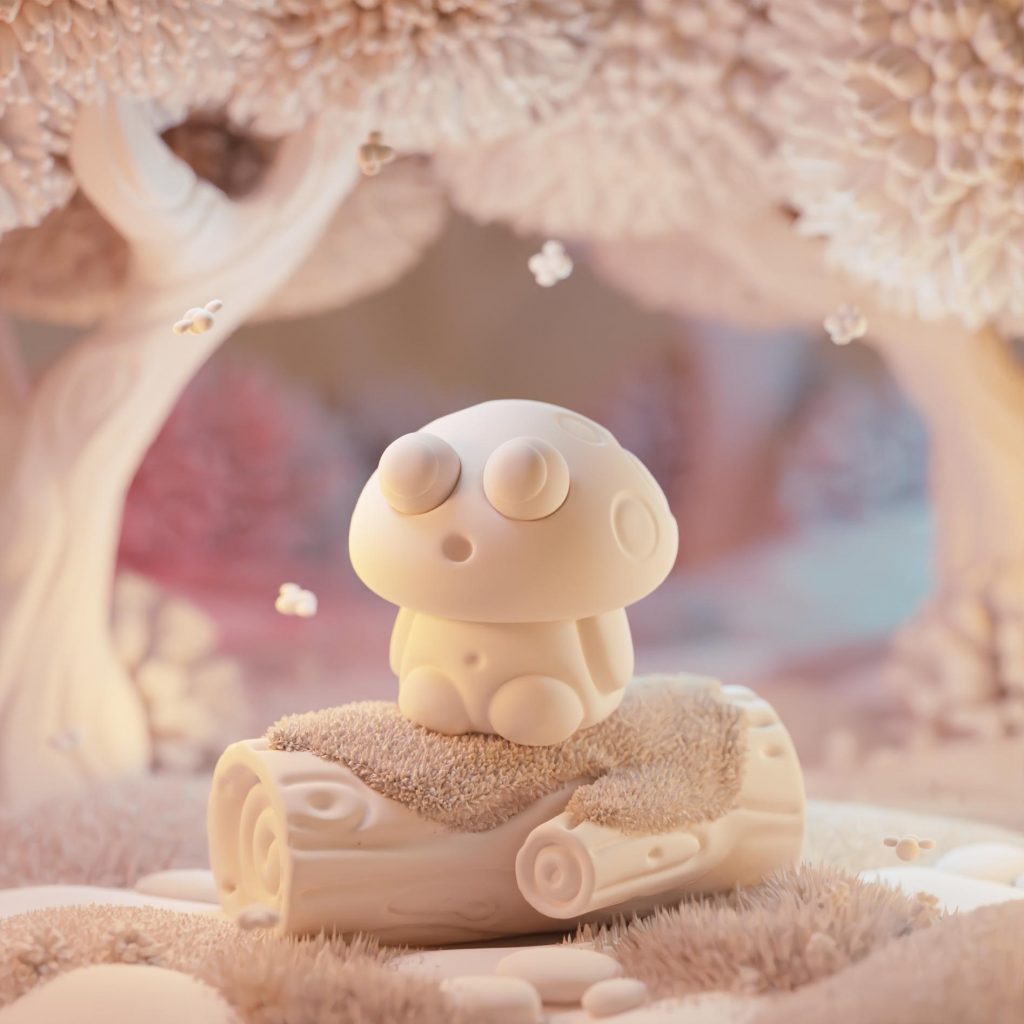 The most obvious lights are the pink and blue ones behind the trees; they give the illusion of depth. I’m not afraid to exaggerate the colors of the lights, because, for my whimsical style, I don’t need the lighting to be realistic. In this case, it even helps to sell the idea that you are not in some regular forest but in a magical one. It makes you wonder what’s going on over there and what is emitting that blue light on the right.

There is also a rim light illuminating the character from behind, separating it from the background even more. There are separate lights shining on the branches and crowns of the trees in the back to focus your attention on all those sculpted details I just added.

Basically, the main idea behind this lighting setup is to use light to guide the viewer's attention to where you need it to be.

The last thing I did was add animations. I made all the fireflies fly around the spirit, and made the spirit rotate in place. 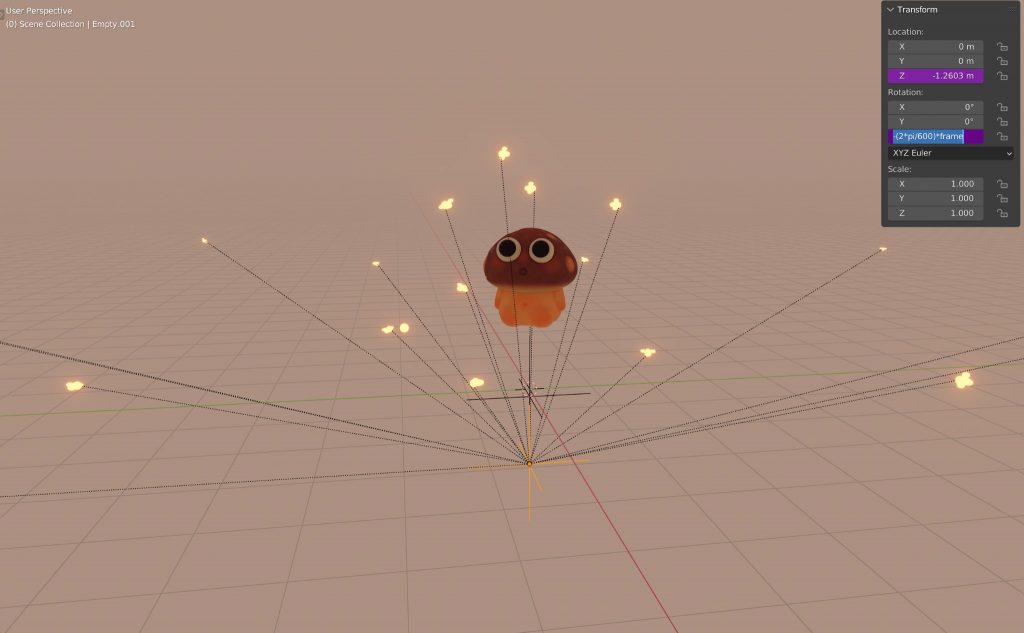 I did this using driver expressions. I parented all the fireflies to an empty that they’re gonna fly around, and entered this expression in the Z rotation field:  #-(2*pi/600)*frame

This expression makes the empty rotate 360 degrees on the Z axis in the span of 600 frames, which is the length of my animation. If you want to know about the basics of driver expressions, I can recommend this 1-minute video by PassiveStar. He explains it much better than I can :)

I used the same principle to make the empty hover by entering a sin-based driver expression in the Location Z field. 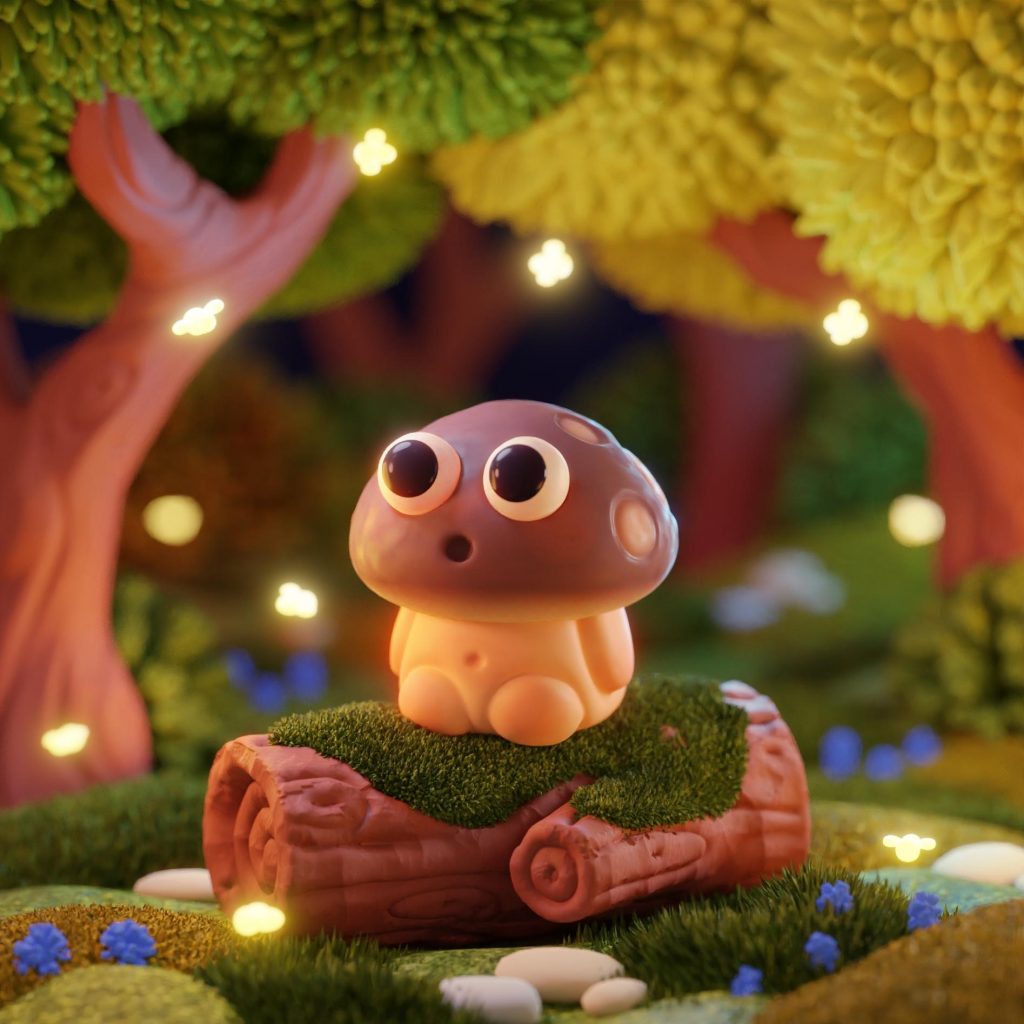 And there you have it! Something I forgot to mention is that I streamed the entire process on my Twitch channel! So, if you are interested in joining me live while I’m working on my 3D creations, I’d be happy to have you stop by!

I hope you found this article useful! Let me know if you have any questions; just tag me here, or DM me on any social network! 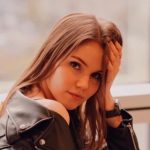 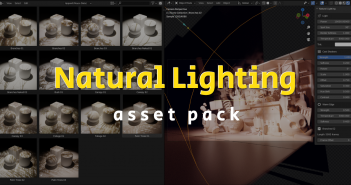