Hi! My name is Alessio Carrotta, I'm an Italian guy living in Barcelona and I'm a self-taught 3D artist.

I had no previous experience in 3D or CGI whatsoever but in March 2020 I lost my job and I was forced by circumstances to remain at home, which gave me plenty of time to study and practice.

Before becoming a cook, I was a musician and I had always thought that doing music for a living was my real dream job—that if I could leave the restaurant business I would spend my time recording, mixing, playing, and composing. That was before I discovered 3D graphics and Blender.

A few months ago I started feeling pretty confident about my skills (maybe too much) and I got the idea to start filming a series because it could be an awesome opportunity to study a lot of different aspects of the 3D world in one go; everything from modeling, texturing and rendering to compositing, motion and camera tracking, rendering, and so on. So I started writing, drawing, and rendering some concepts and overall just playing with the idea to find the mood I wanted for the whole thing.

By coincidence, when I was working on a desert environment I needed for an establishing shot, I started following the awesome Martin Klekner's environment course: excellent timing to learn something new about 3D environments.

I was mainly inspired by real-life photos found on the internet and by the characteristic shore shape in the northern Catalonia region called "Costa Brava". Sketching this scene I was mainly trying to keep a fairly empty environment.

The biggest part of the work was done in Blender: at first, I just needed to block out composition, camera placement and I tried some HDRIs just to get an idea of the scene and to figure out what I was searching for.

The desert is actually just a plane with a really fancy displacement texture put on top and some shading tricks: I mostly followed Martin Klekner’s technique in the beginning and then added nodes and textures to achieve something more organic with the other environments I was working on for the series. For example, I was trying to get a desert that was less dusty and more rocky looking, like the sea had dried out somewhat recently and just a few years have passed since that region became a desert. 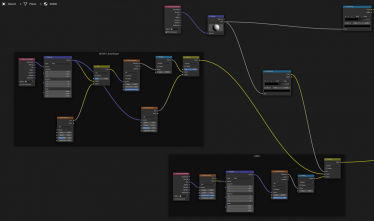 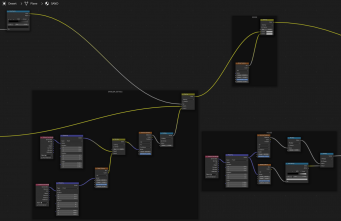 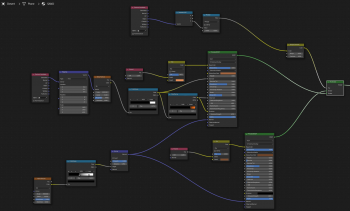 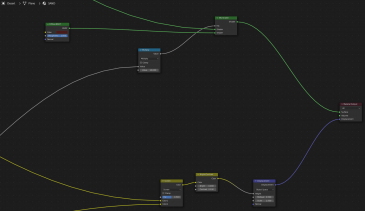 For the cliff, I just combined 3 different assets from Quixel Megascans and only tweaked the Roughness and AO maps a little to make them even less specular than the original (I really don't like to touch the "specularity" slider. In the beginning, while I was still struggling with the mythical Donut, I heard that it's not really accurate to mess with that option and it stuck with me). 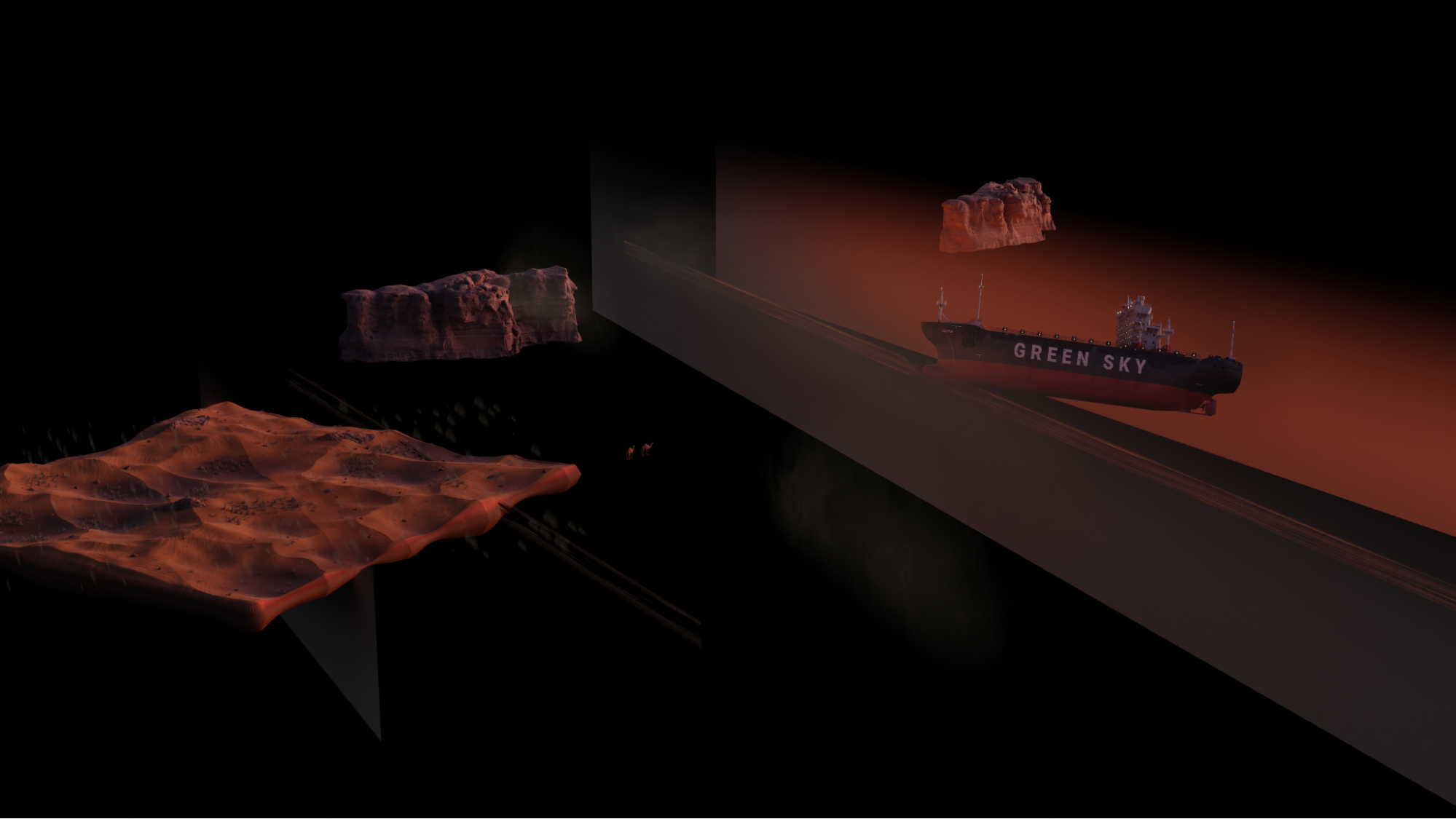 Then I spent a long time tweaking and experimenting to get the atmospheric effect and finally settled on three different layers.

First I created a gradient texture and applied it to some planes to obtain a mist effect that's denser near the ground and fading to transparency on the Z-axis, simulating the haze created by the sand and humidity near the ground.

The second stage was to use a PNG of a masked smoke element and set it up for a particle system. Because the desert plane only has 4 vertices and it's displaced in the shading, I needed to make a little trickery to put the particles onto the plane (and it's actually a useful technique I always use to put things floating on water, unless I'm using dynamic paint): the first step is to bake the displacement and export it as a black and white image, then set up a plane with a fair amount of subdivisions and a displacement modifier using the exported image as a texture for the modifier. Ideally, the plane displaced in the shading and the one with the modifier should get a similar shape, but you probably have to tweak the scale of the modifier a little; then it's just a matter of placing your particles on the mesh that you had applied the baked displacement on and making it invisible. A really simple recipe. 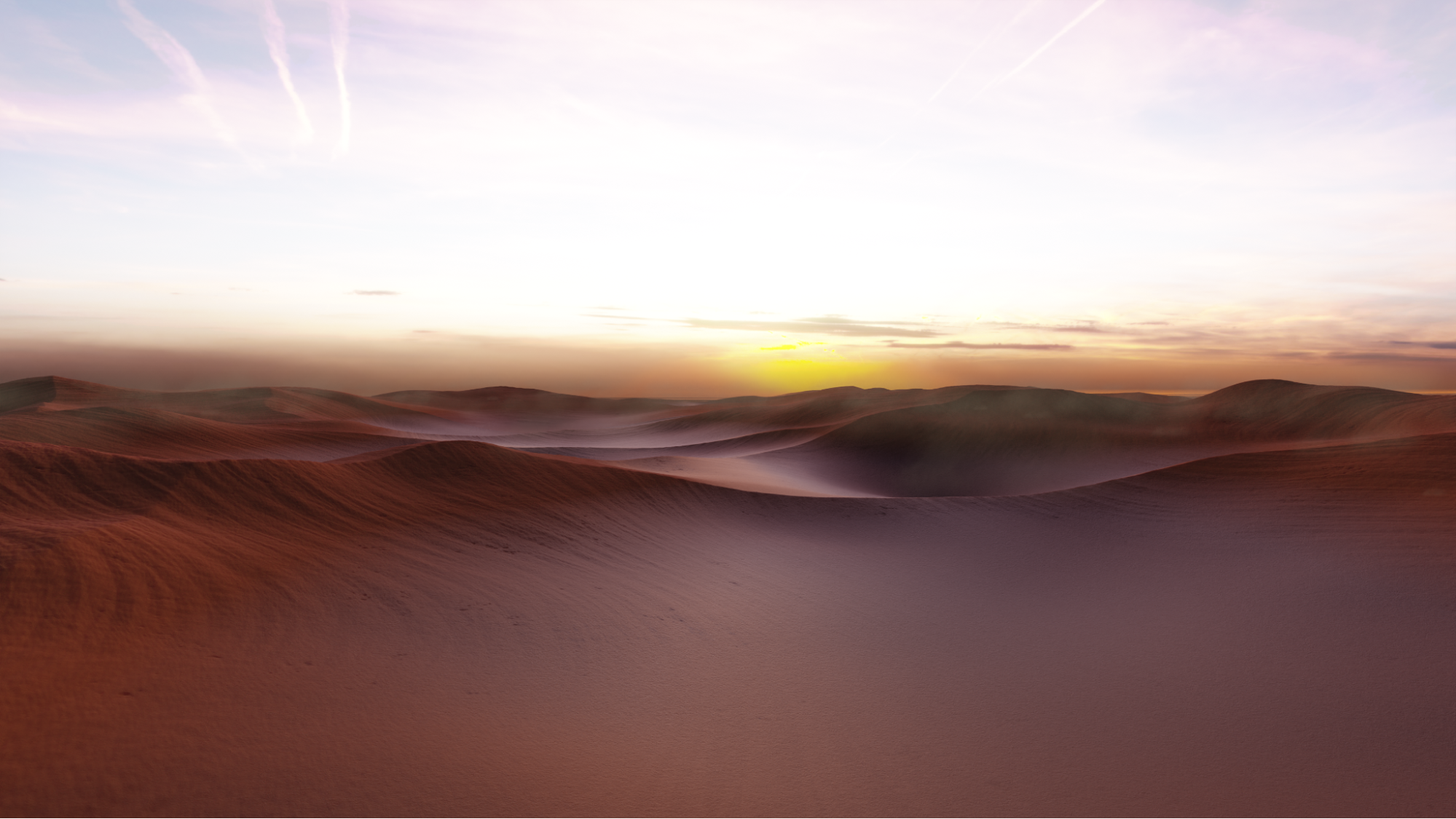 The third and final step for the atmosphere came in the compositing, where I mixed in a mist pass to get more separation between the near foreground and the more far-off dunes. 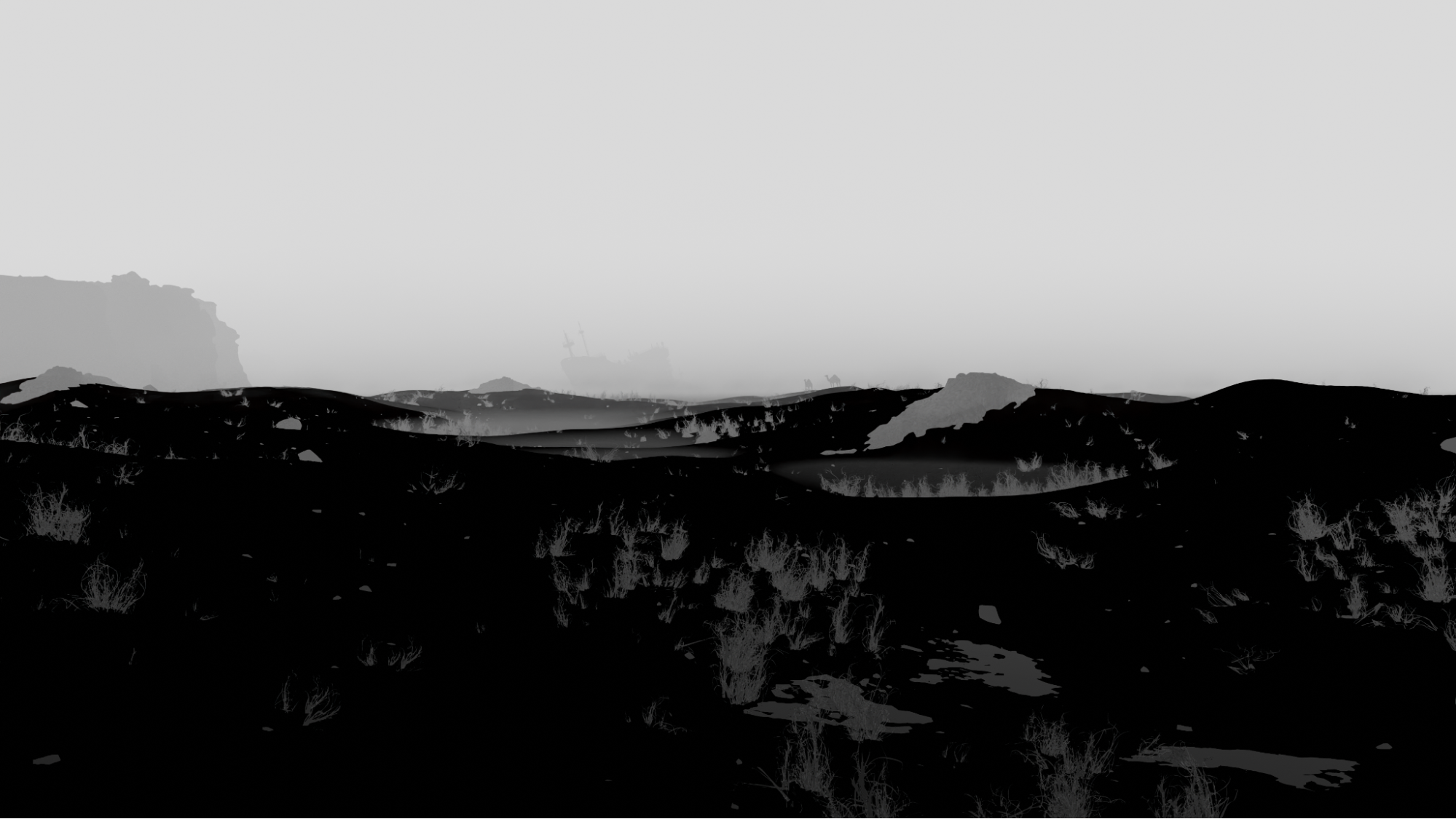 Finally, the grass element is another asset from Quixel Megascans and it's just set as a particle system using the same displaced plane of the smoke particle system.

Other than that, I only added Ian Hubert's cargo ship asset in the background and rendered two PNGs of a camel from slightly different points of view, then imported those images as planes into my scene as a little detail (the camel model was really dense in geometry and, considering the distance at which I was planning to put those camels, it made more sense to use the rendered silhouettes rather than the model itself).

The color grading stage was done in DaVinci Resolve and I just tried to blend everything together with a subtle orange tint and a little boost on general highlights. 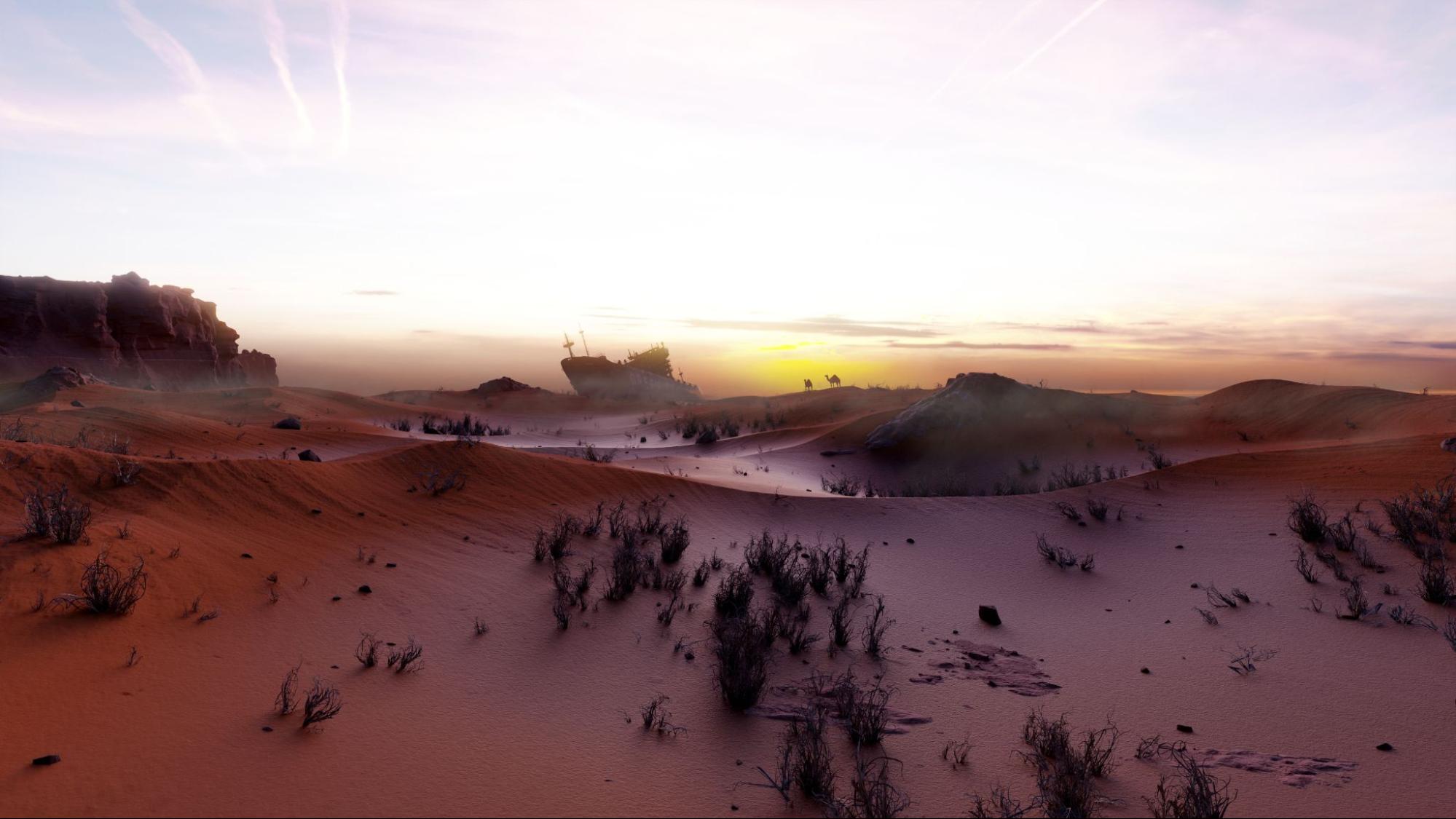 This environment is meant to be an establishing shot for a series I'm working on, which is called Barna99, and it depicts how the Costa Brava in Catalonia looks by the year 2099.

At first, I was planning to add a lot more greebles and rubbish on the ground, to really sell that not so long ago the entire area was covered by water in a really polluted region, but in the end, I liked the spare and minimalistic ambiance.

At the moment I'm working on a green screen element of a merchant dragging his goods, animating those camels to switch the placeholder image with the full walk cycle and add a little bit of a heat distortion over the horizon (I'm following Ian Hubert's technique and it's actually just a shading trick so…pretty exciting!).

Considering all of that, I think I can still call this piece a work in progress. 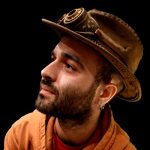 Alex Carrotta, a musician who became a chef who became a 3D artist. 29 years of experience in driving people nuts (they still haven’t figured out how to stop me). Based in Barcelona 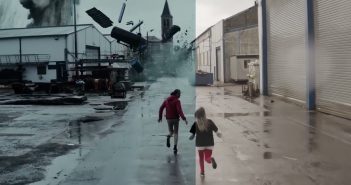 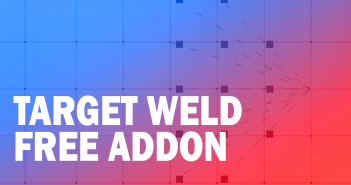