The world of graphic tablets has massively expanded over the past few years. Artists now have a plethora of affordable and high-quality options to choose from in a market which only a decade ago was dominated by a single company with very little competition. All of this is great news for the artist, and with the coinciding explosion of Blender’s popularity, for the tablet makers as well. Blender is the perfect platform to test and use graphic tablets, with its incredible versatility, and its inclusion of multiple workflows that benefit from a pen/touch interface, such as the recently revamped sculpt mode and the all-mighty Grease Pencil.

This is where this post/review comes in: one of the leading graphics tablet makers, XP-Pen, has provided us with a review sample of its top-of-the-line product, the  XP-Pen Artist 24 Pro. It's important to note that this does not grant them editorial control over the review. 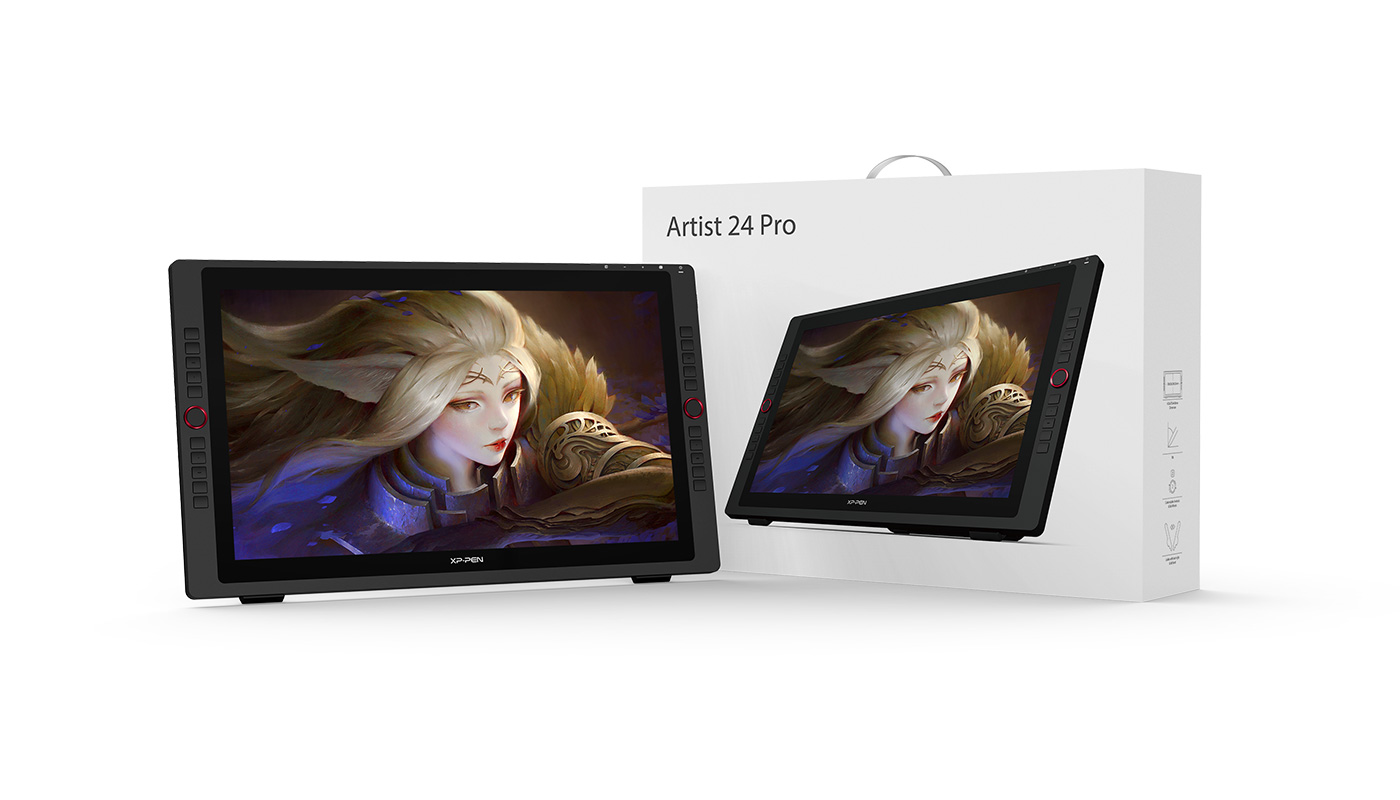 This review has three major components: First, I will talk about the physical aspect of the tablet itself, its specs, the packaging it came in, and more. Then I will go over Its performance with Blender across multiple modes. Finally, I will talk about its potential as a screen replacement/hybrid and my experience with daily driving it for over two weeks. Let’s jump right in!

What’s in the box

The tablet was shipped to me via XP-Pen's Amazon store. As expected for their biggest offering, the package came in at a hefty 14 kilograms in weight. One of my main concerns at this stage was the packaging, as the weight, size, and fragile nature of such a device are a perfect combo for being damaged during transit. My fears were quickly dissipated when I saw that the tablet was protected by three cardboard boxes, each lined with protection to dampen any impact. 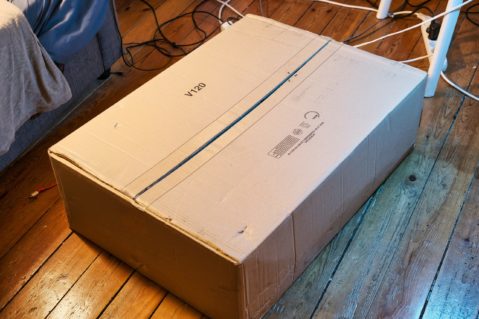 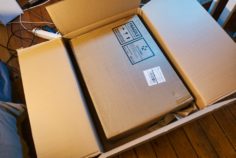 A box within a box 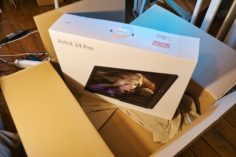 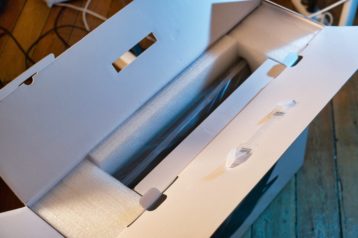 The tablet is seated in a styrofoam cage 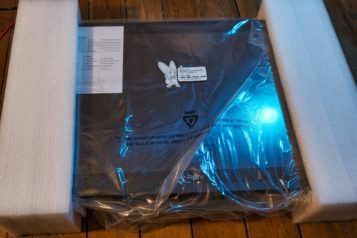 And at the heart of it: A nice and shiny new tablet 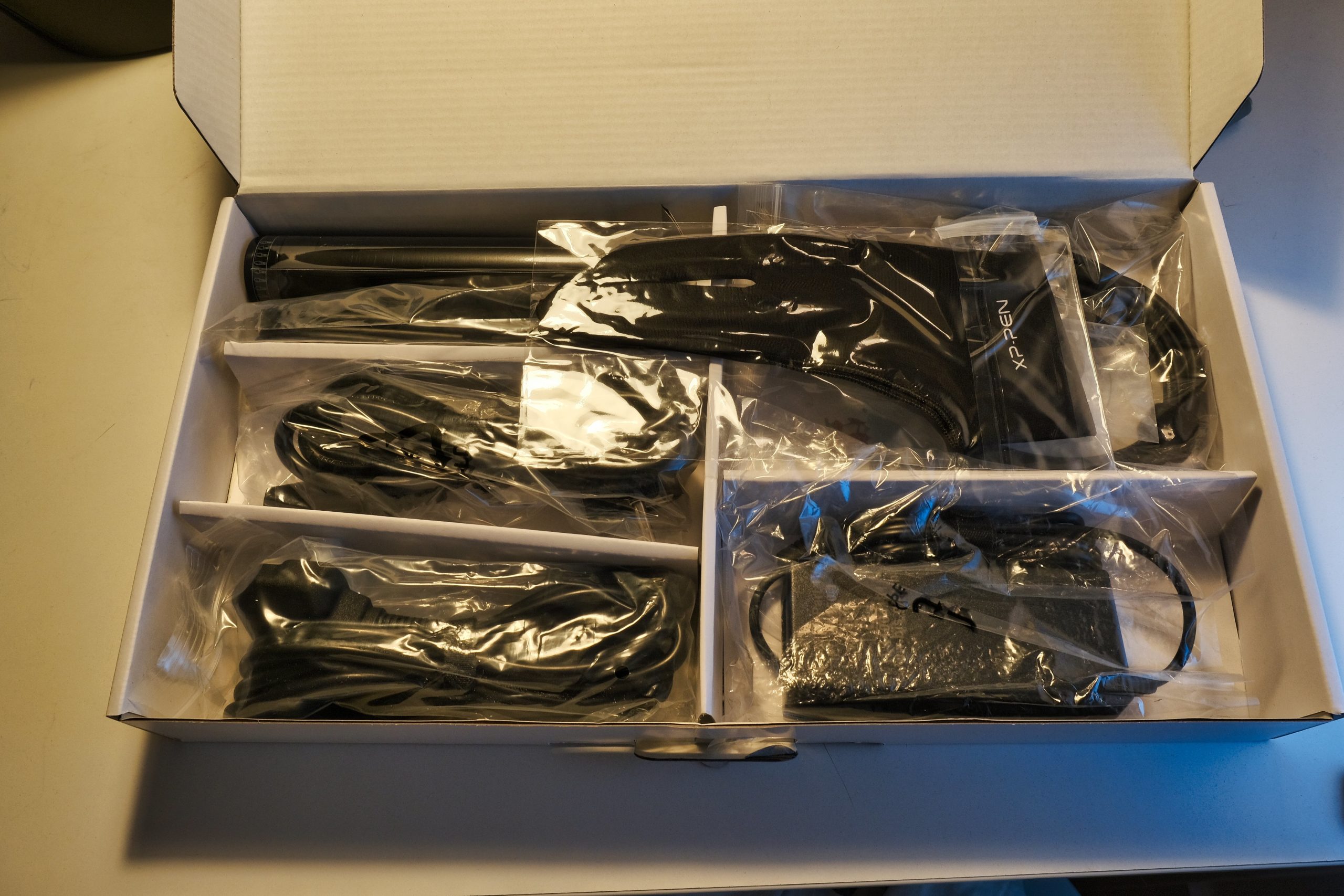 The Tablet: Looks and Specs

There is no need to beat around the bush: The tablet looks sleek and modern. The tablet feels sturdy, and the two red rollers immediately pop out and gracefully flank the massive screen. 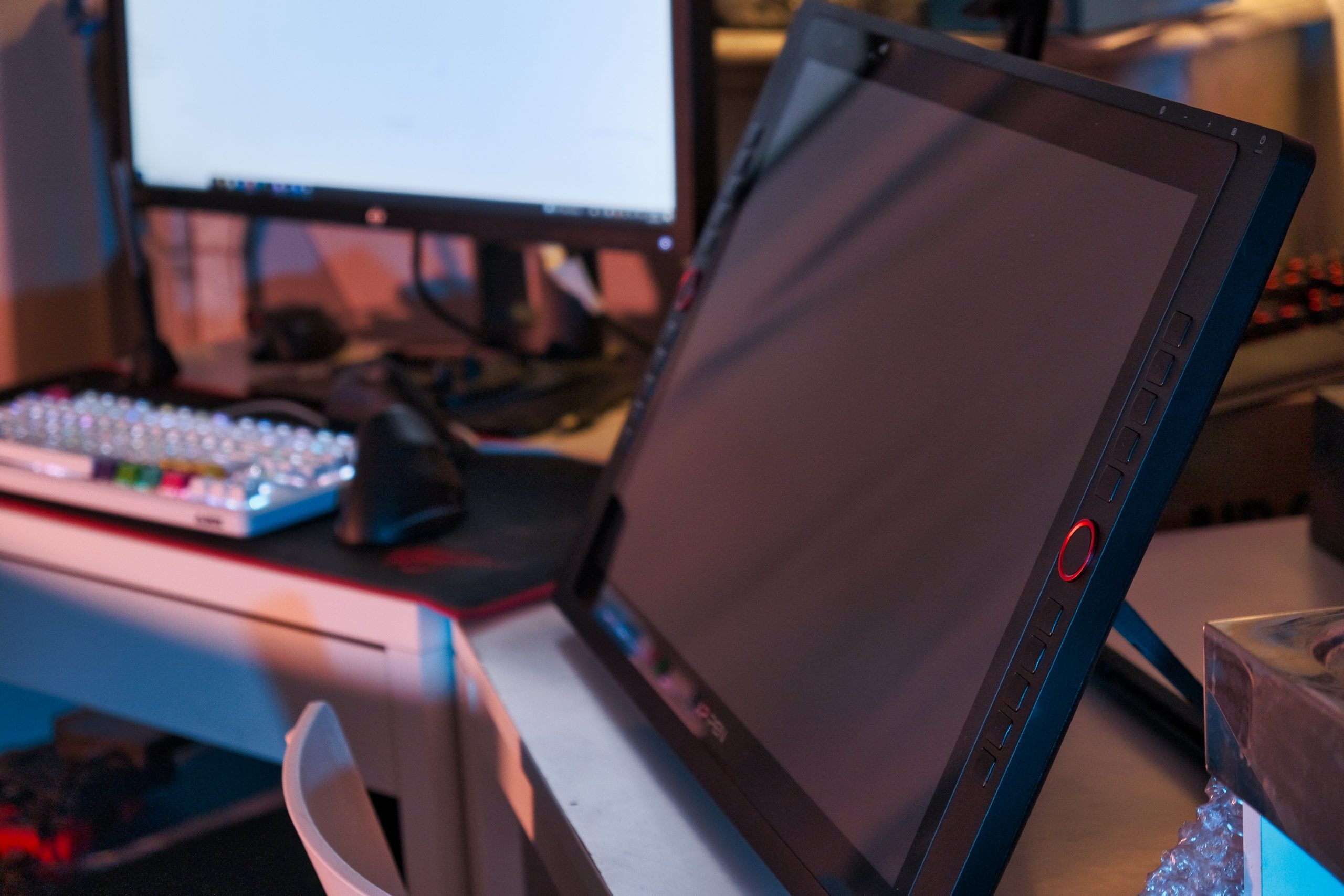 The tablet has 10 buttons on each side for a massive total of twenty customizable inputs, on top of the two rollers. On the top right of the tablet are five touch buttons to access the menu, power, brightness settings, and more. The tablet has an easily adjustable stand to quickly change the angle at which it's sitting from 16 to 90 degrees. The tablet also has two USB passthrough slots in the back, a welcome addition for a display of this size, and to quickly connect peripherals when needed. 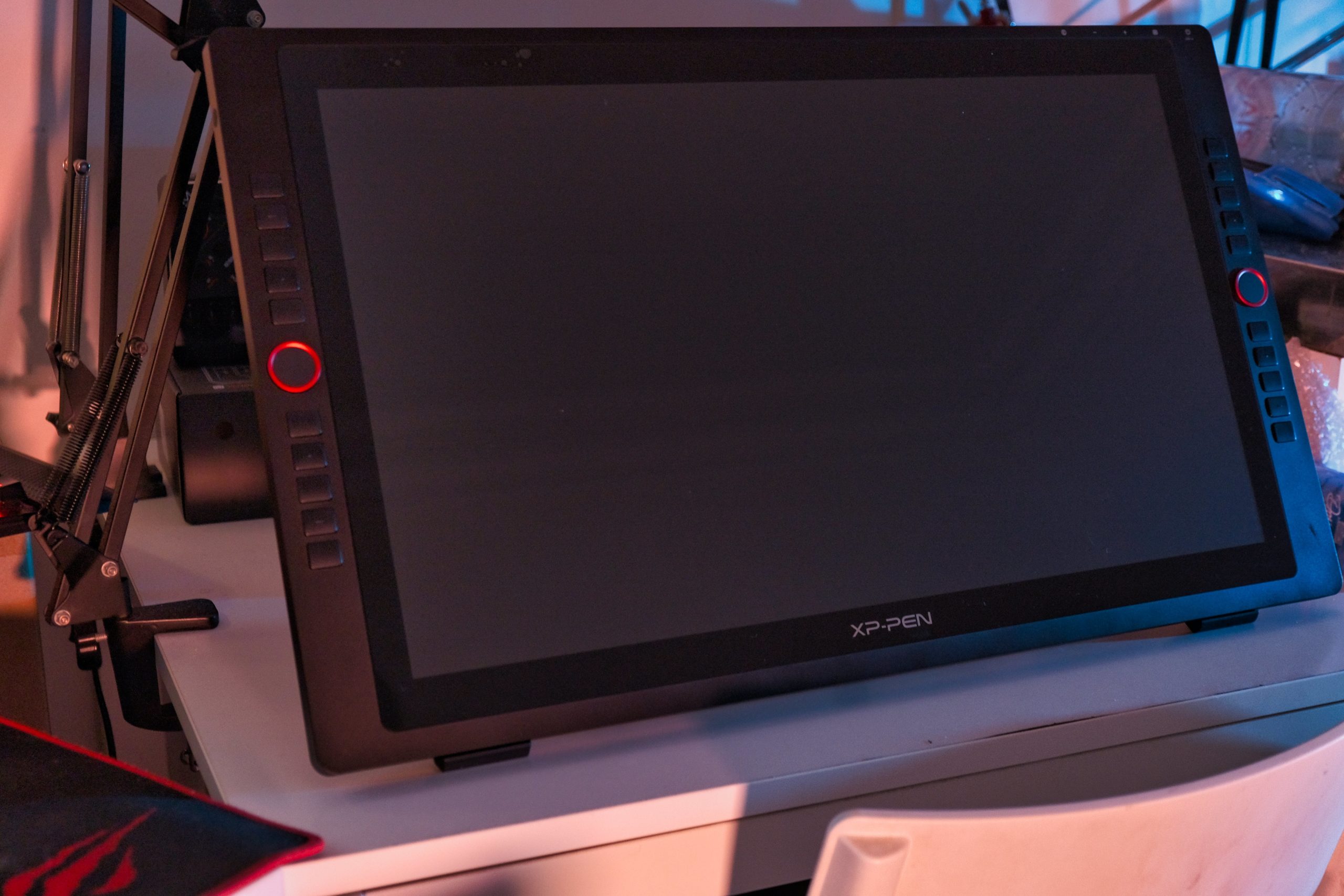 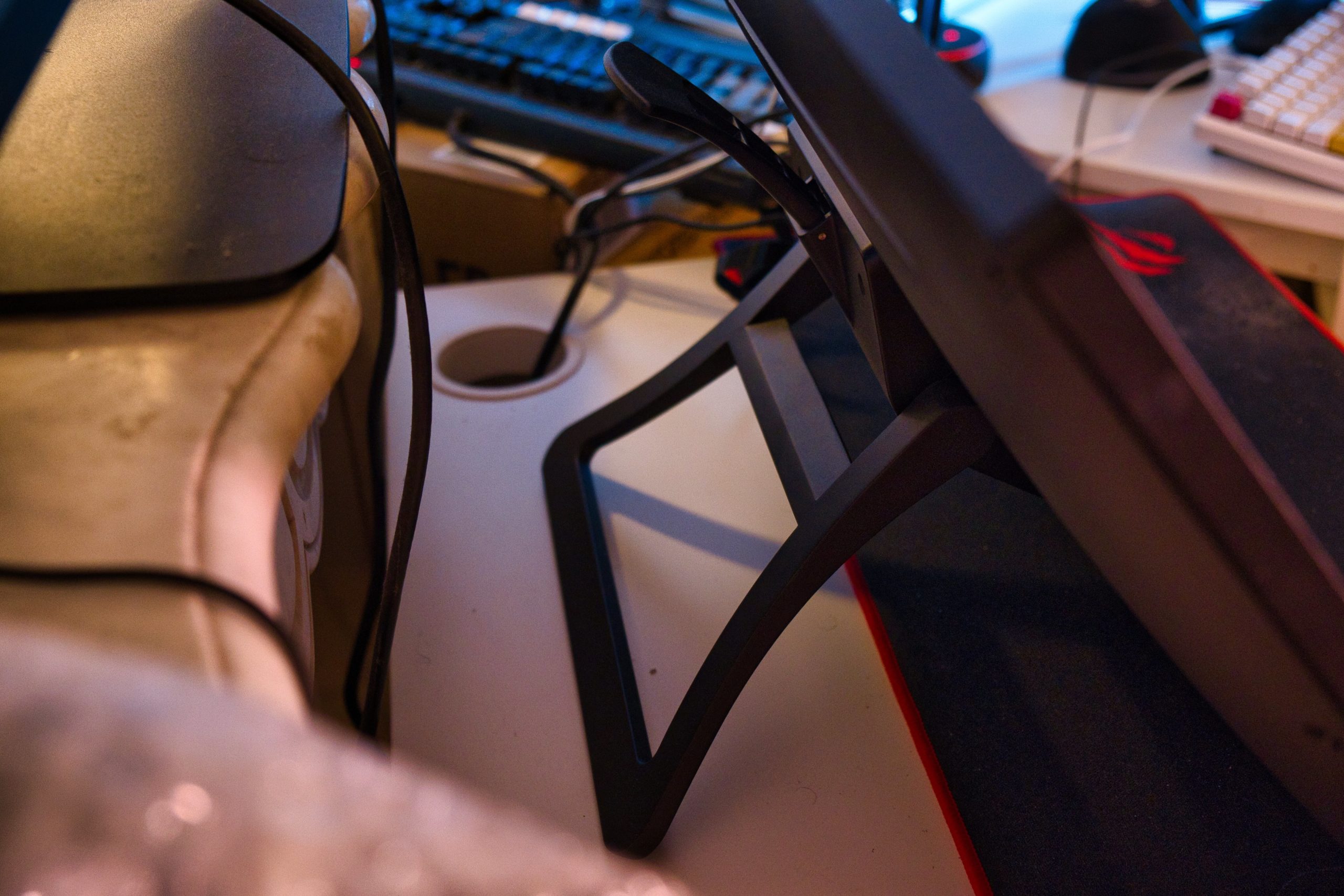 The tablet's easily adjustable yet sturdy stand is one of its greatest assets, especially in a hybrid monitor/tablet setup

My PC setup is not the most recent, and as such, I didn't have a USB C port to connect the tablet through. Instead, I connected the tablet by using the provided HDMI and USB-C to USB-A cables, as well as the power cable. Using USB-C to USB-C would remove the need for connecting HDMI as well. The installation process was fairly straightforward: I downloaded the appropriate driver from the XP-Pen website, installed it, and was ready to go. XP-Pen has released a detailed video tutorial on the installation process:

The XP-Pen driver is called "Pentablet" and has received a face-lift since the release of their tutorial video shown above. Here is what it looks like now: 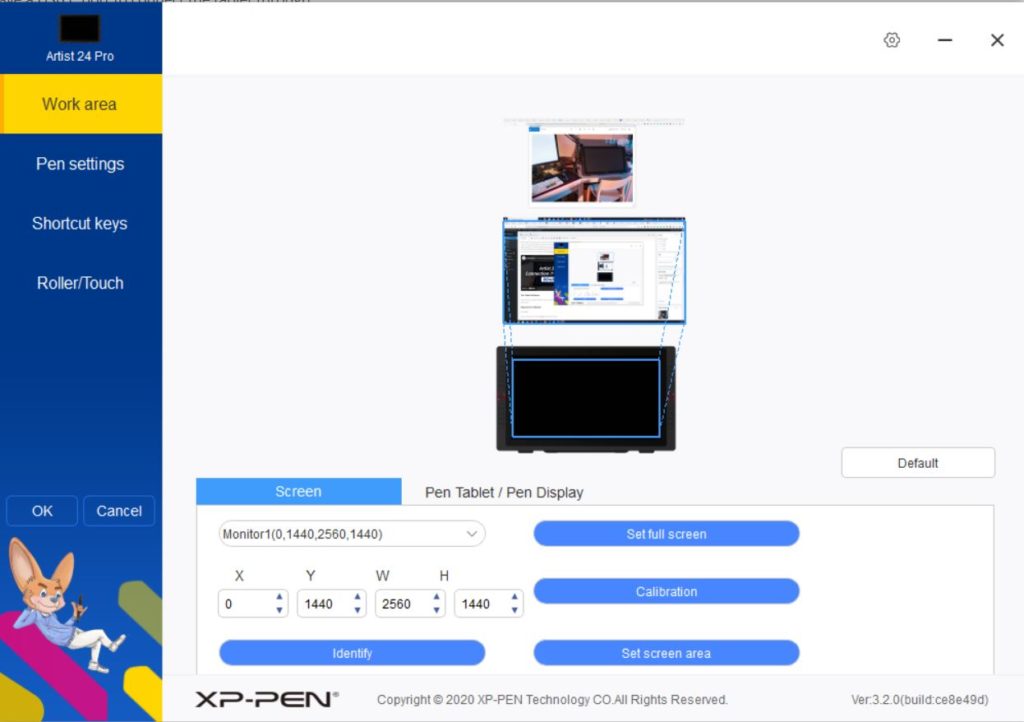 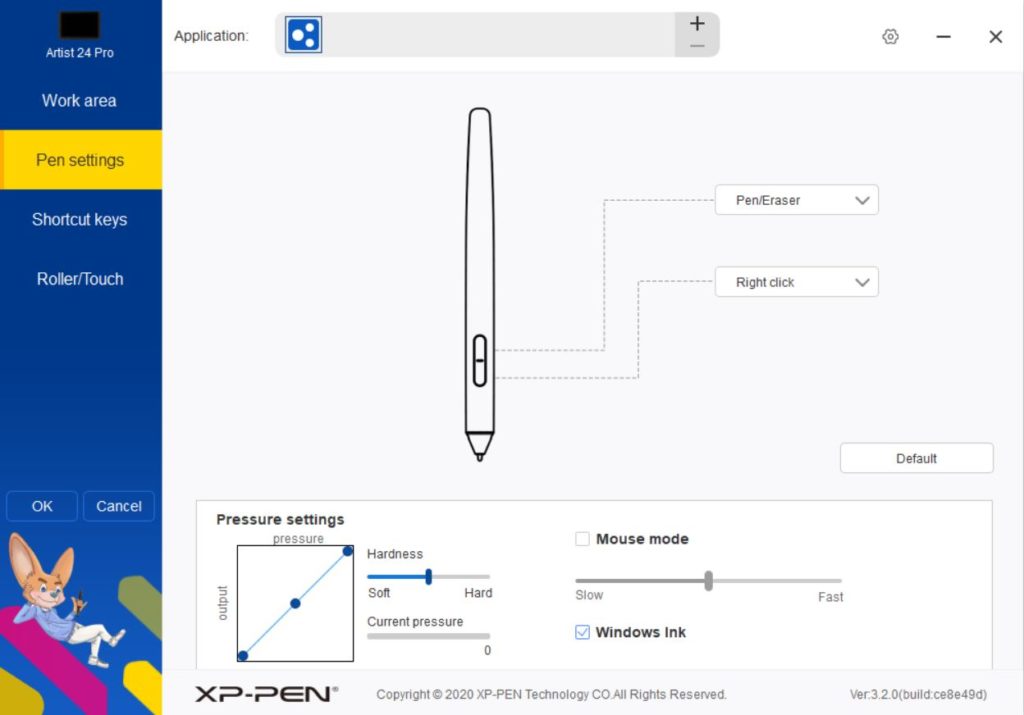 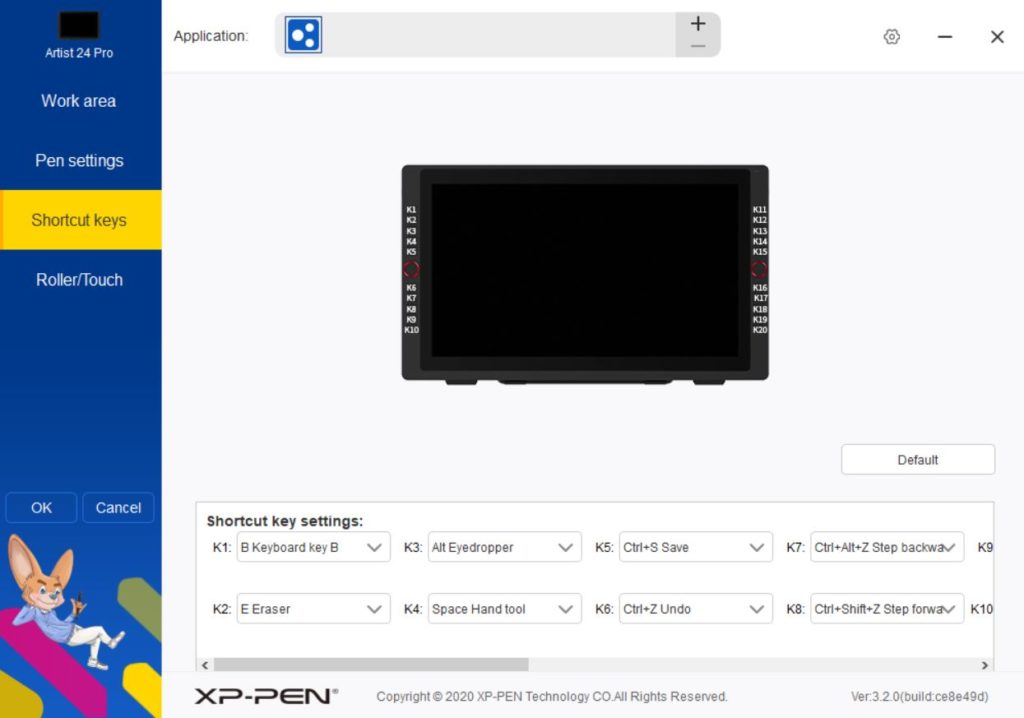 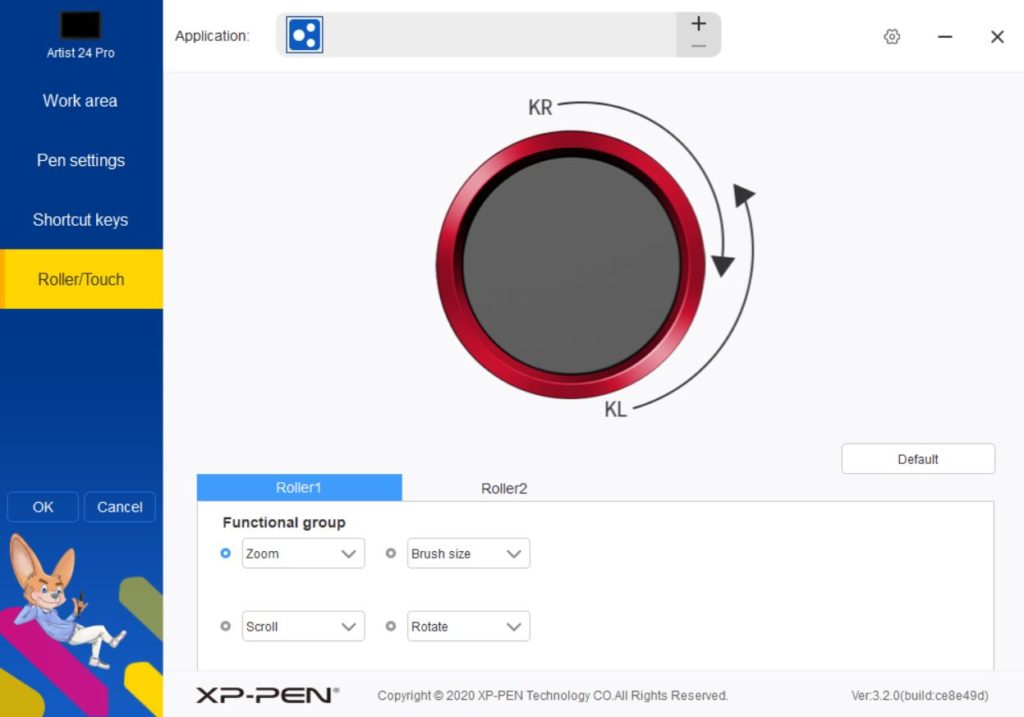 The Pentablet software allows to control the tablet's work area and screen resolution, the Pen's settings including the two on-pen shortcuts and pressure settings, the 20 shortcut keys on the tablet, and the two rollers. The pen and shortcut, and roller settings can be assigned different profiles per application, a very useful feature. I noticed that sometimes I needed to manually launch the Pentablet software for my tablet to remember how I set it up (mainly the work area), but other than that the software performed as expected

The tablet's first real test would be how it fared in Blender's sculpt mode. The new and improved sculpt mode is more powerful than ever but has also increased in complexity with the addition of new brushes and features. This is where all of the 24 Pro's shortcuts and rollers come into play: 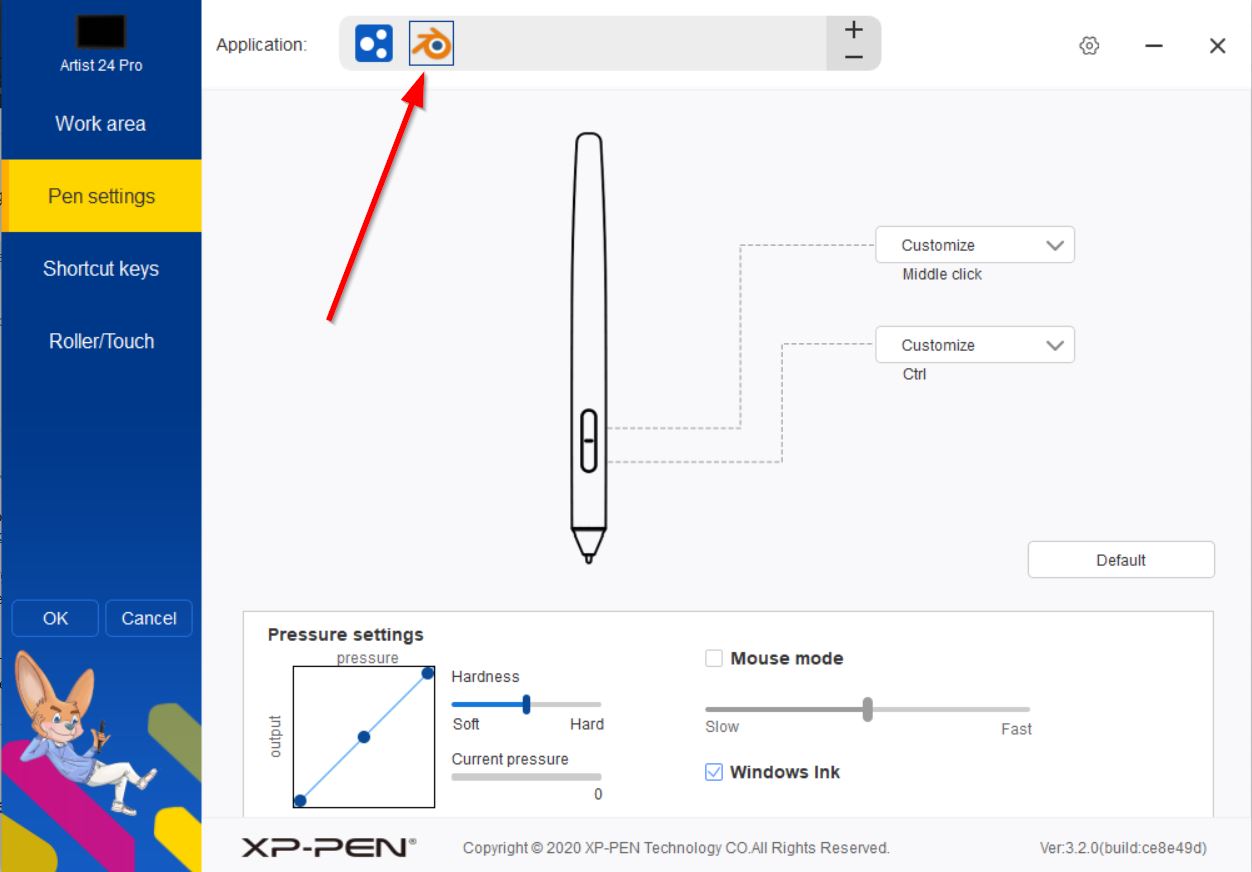 Using the Pentablet software, I mapped the button shortcuts to my most-used brushes, to activating masking, undo, and save. I mapped the left roller to control brush size, and the right roller to control the zoom level. I finally mapped the two buttons on my pen to ctrl and middle click, this way I could easily invert the brush I am using and rotate the viewport around the sculpted object.

Using this setup, I could fully immerse myself in sculpting for long periods of time without ever needing to reach for my keyboard or anything other than the tablet. Combined with the massive screen, the experience of sculpting on this tablet was great. The pen felt responsive, and my strokes registered the way I expected the overwhelming majority of the time.

Switching over to Grease Pencil, I came across a limitation in Pentablet's so far great track record: since the different profiles are application-based, I cannot program and switch to a separate profile to use with Grease Pencil. Since the Sculpt Mode and Grease Pencil don't share most context-specific shortcuts, I ended up having to settle on one or the other, which as a 3D artist was the Sculpt mode shortcuts. Another hiccup with Grease Pencil was the pen defaulting in Eraser mode. This seems to be a common driver issue with Windows and Blender not specifically tied to XP-Pen. The way around it was to use the Stylus's Pen/Erase shortcut to switch back to Pen mode before starting to draw. 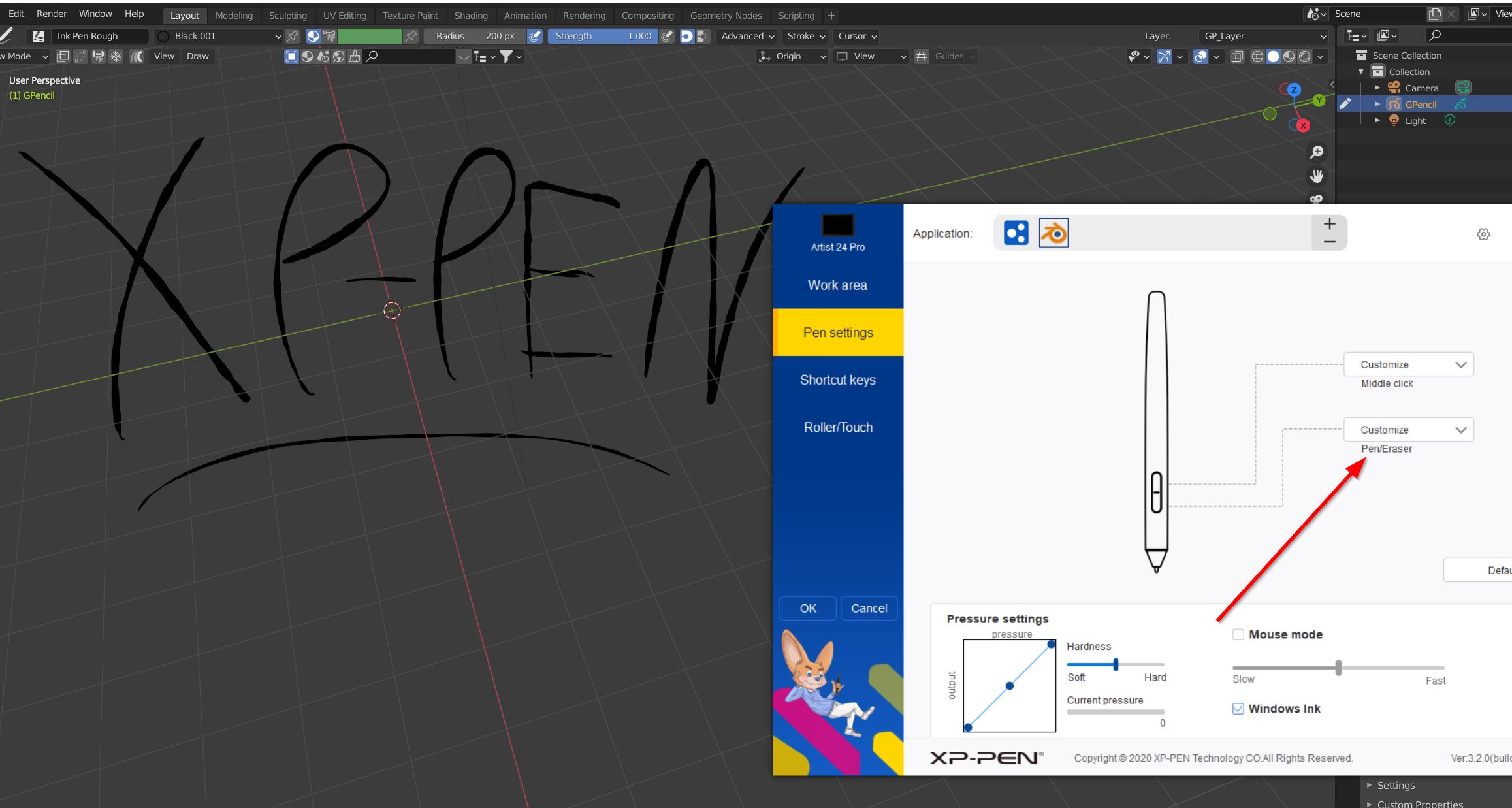 Despite the couple of hurdles in setting up the tablet for GP use, drawing in Grease Pencil felt snappy and very responsive: The battery-less pen was pixel-accurate and light enough for extended and fluid use. While I am not a 2D artist by any stretch of the imagination, I believe that the tablet will be a joy to use for 2D (and color) work for those undaunted by its size.

Daily Driving it as a Main Computer Monitor:

A great bonus aspect of this tablet for me is its potential place in a dual-screen setup, as a computer monitor. As you may have gleaned from my pictures, I live in a tiny Parisian apartment, where space is a scarce resource to be carefully managed. It might seem counterintuitive, but a big tablet would potentially fit the bill perfectly: If it handles well enough as a main screen, it can replace both a monitor and a smaller graphics tablet (which, if too small, can't be comfortably used as a monitor). 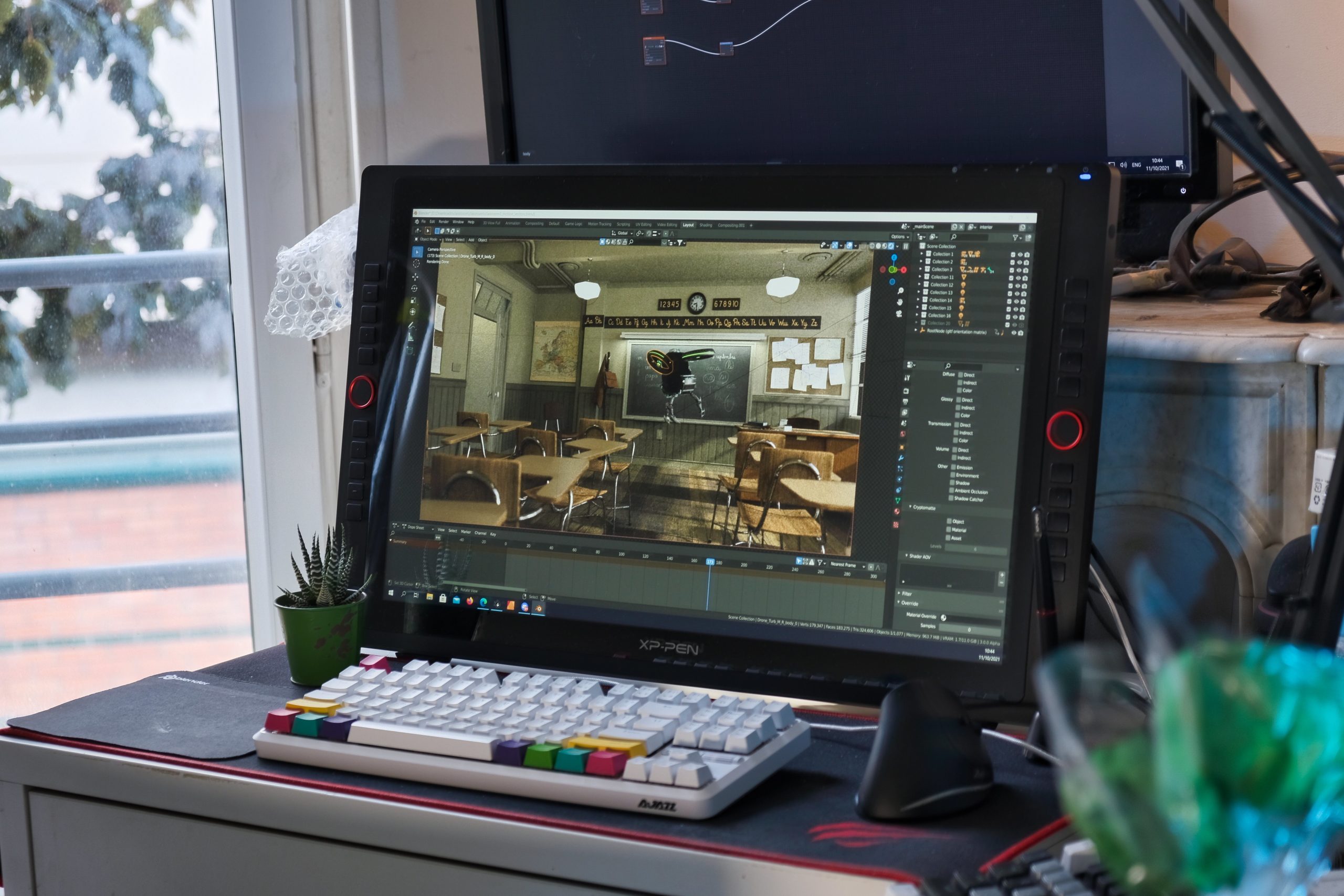 The bright and vivid screen has been a pleasure to use in most conditions, though it still suffers from above-than-average reflectivity

In my two weeks of using the tablet, the screen proved to be plenty bright and vivid, with great color rendition. Its QHD resolution is perfect for its size, and the screen looks and feels crisp. It was suitable for most uses and I even played a few games on it and was pleasantly surprised. Its response rate of 14ms might not make it ideal for the most demanding of FPS players, but overall the tablet sports a great bright screen that I found myself constantly returning to it as my main one. One main caveat is the fact that the screen is quite reflective (a common feature among graphics tablets), but this can be mitigated by the screen's great brightness and by keeping the viewing angles in check. 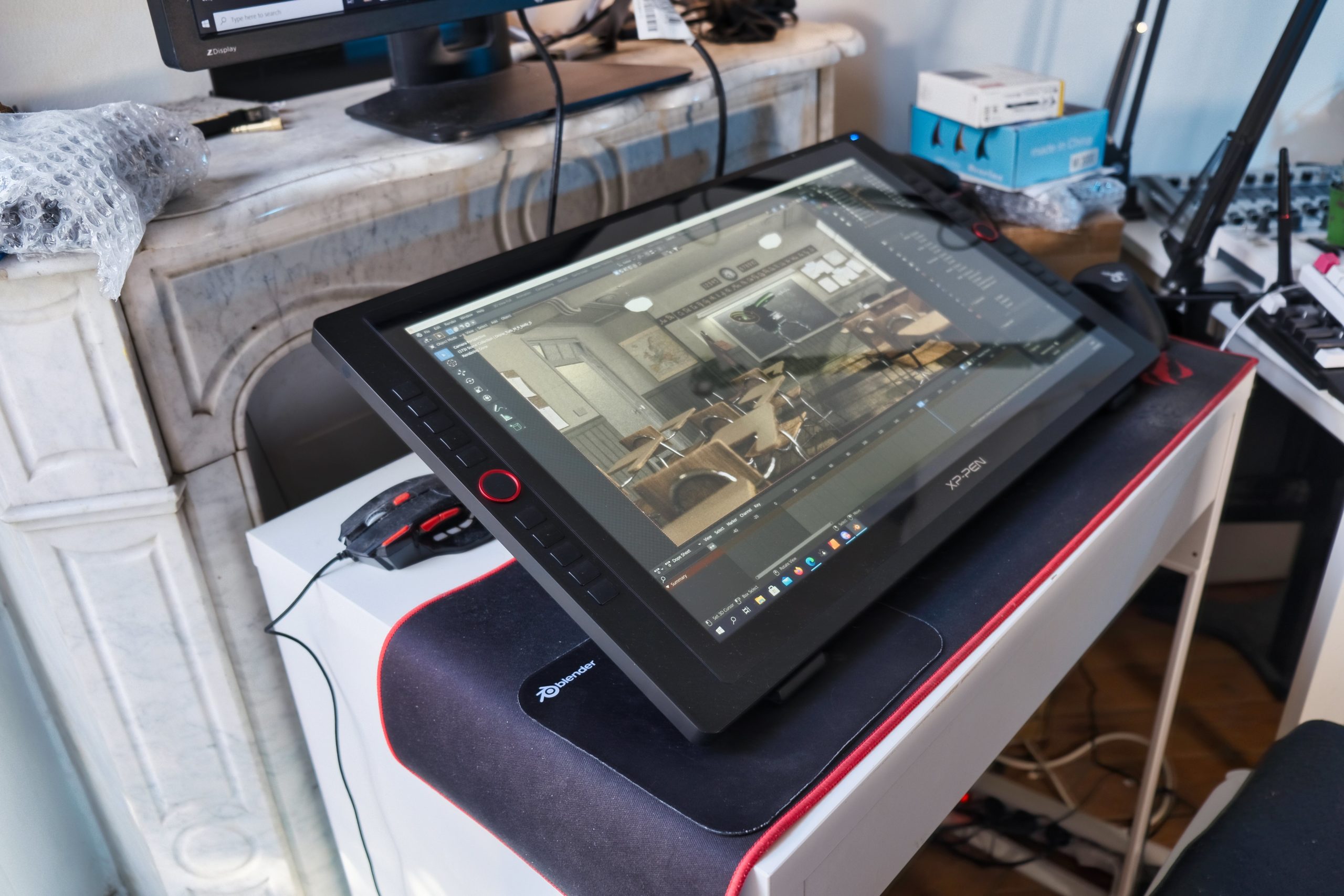 The fact that the tablet can sit upright on the table greatly simplified my vertical dual monitor setup. The adjustable stand played a key role in the screen's usability and space management: I could easily flip the screen back into tablet mode whenever I needed to use the tablet to sculpt and draw, and then re-adjust it back into an upright position when I wanted it to act mainly as a monitor. 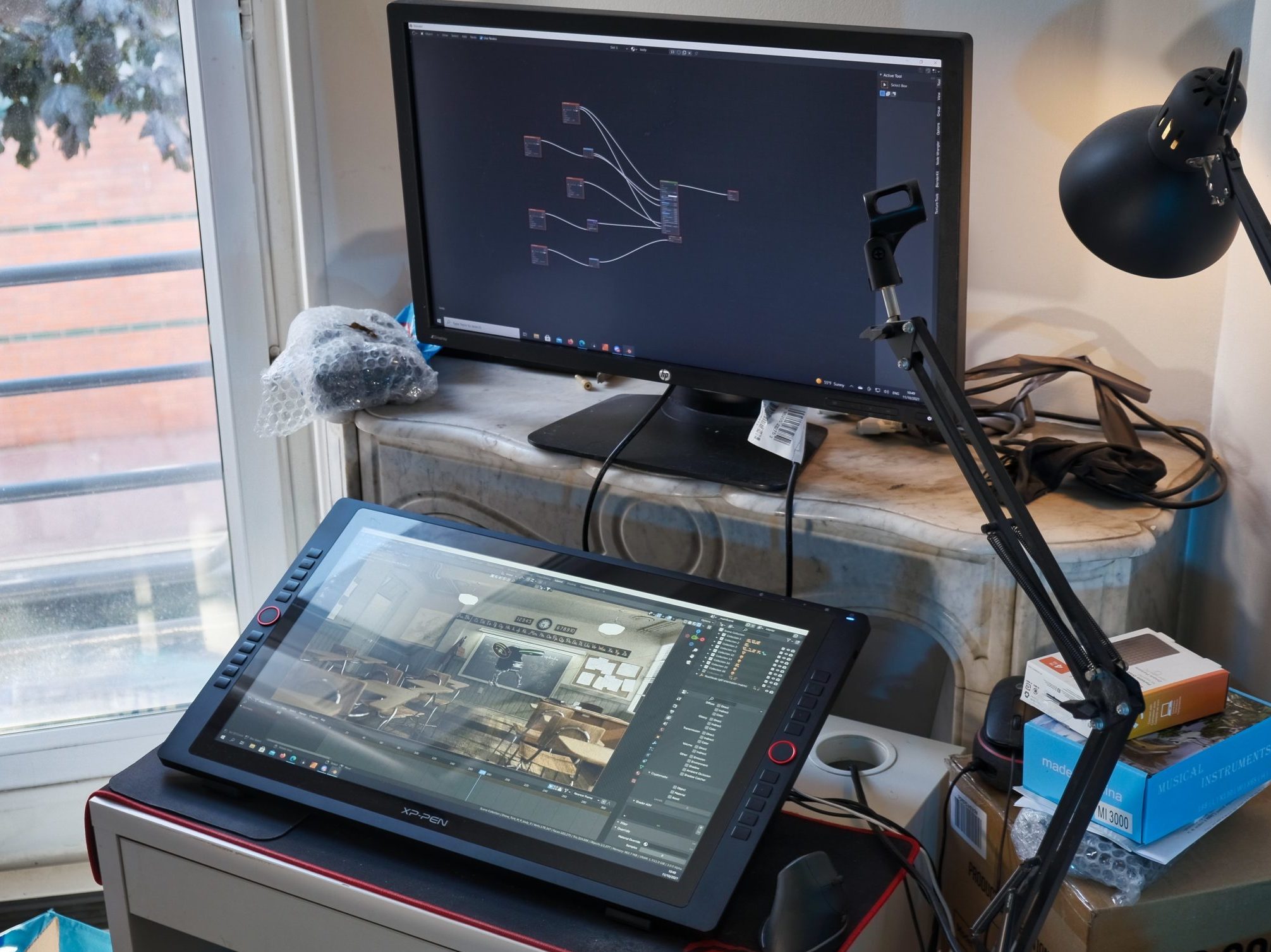 The extra shortcuts also proved useful in daily use: I programmed the rollers to scroll and zoom, and programmed shortcuts such as copy-paste, back and forward, undo, and more, all of which allowed me to spend extended periods of time browsing and reading with minimal keystrokes needed to navigate web-pages.

The Artist 24 Pro is definitely a powerhouse, combining ample drawing space, a great high resolution and color accurate screen, as well as a plethora of usability features in software and hardware form. All of this value comes at a price: 900 €/$/£ depending on the region, though XP-Pen has frequently run a few sales on all of its lineup. The Artist 24 Pro certainly has strong arguments to justify its cost (especially when compared to some of its competition's pricing), including its suitability as a monitor and a productivity tool on top of being a fully-featured graphics tablet. 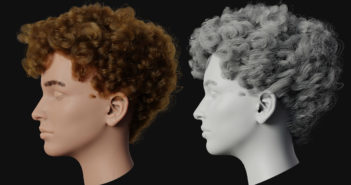 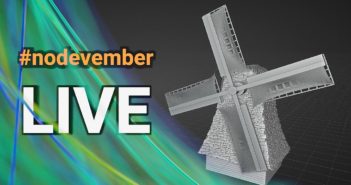