Intel's powerful denoise library's latest update has been out for less than a month, but we already have it in the Blender master branch, which means it is available in the latest Blender 3.0 alpha builds.

#OpenImageDenoise 1.4 is out. Check out the new features in this major update to Intel's #opensource CPU render denoiser, used in #B3D, #Unity3D and #VRay, including support for normal and albedo maps and #AppleSiliconhttps://t.co/zKYG2u4MKM#rendering #archviz #VFX #gamedev pic.twitter.com/FIJIxjcqHG

OIDN was already a favorite among Blender's denoising options, with the library arguably doing a better job at detail preservation than its NVidia OptiX denoiser counterpart, at the cost of more ram usage and slightly slower performance. This latest major update makes the denoiser even more performant, reducing memory usage, adding the ability to denoise normal and albedo maps, and finally doing a much better job at fine detail preservation. Check it out in action by downloading the latest Blender daily build from the link below: 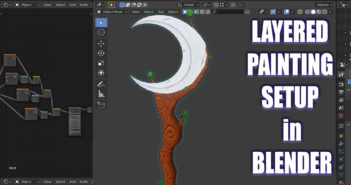