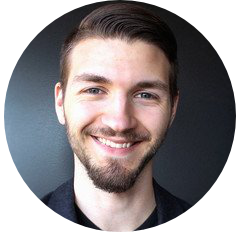 Original interview from Edge Loop Magazine: Find this and other FREE content at Edgeloopmag.com

My name is Ryan Richmond. I am the Lead Concept Artist at Intrepid Studios. I was, up until recently, living in San Diego, CA. For a myriad of reasons, I have since returned to Indiana (you heard that right, I chose to move from San Diego to Indiana) and continue my work remotely.

While Intrepid has been my home as an artist for several years now, I worked on many other projects in games and film prior to that and continue to do so in my free time. It's a great joy to be able to contribute to a variety of projects and massage the different skills I have acquired as well as pick up new tricks along the way.

With that said, working hand in hand with such an incredible team on a project as ambitious as Ashes of Creation and being entrusted with defining the look of the world has been an honor and a very rewarding experience. I began my time with Intrepid as a young but eager, environment-focused concept artist. I didn't know much about 3D but tried to incorporate it into my work when I could. Having minimally taught myself Modo back in art school, I brought that with me.

As I gained more experience, responsibility, and knowledge of the production pipeline, I began to see how effective and essential the use of 3D could be within my own pipeline. Plus, I've simply found a love for the medium. Although, Blender has actually been more of a recent addition. I'd say that I've probably been using it for no more than a year, year and a half, now.

After seeing the amazing work done by other artists and encouraged by some friends of mine to jump on board, I finally dove in and haven't looked back. There is just so much you can do with it. From simple blockouts to fully-realized environments to character concept sculpts, you name it—I've hardly scratched the surface.

Blender has enhanced my work immensely in terms of speed and quality.  Add-ons are certainly a big part of that. While I've found plenty of useful tools included within the software itself, there are a few plugins that have become staples for me. Hard-Ops and BoxCutter are two of those. They make simple tasks SO much easier. Whether it's the common act of mirroring objects or carving something elaborate out of a cube, they give you so much freedom.

I also use Megascans quite a lot to accent the work I'm able to create on my own. It's often a great time saver and frees me up to focus on the overall design without getting bogged down by details, since I know they are already high quality. Other than that, I run blender fairly bare-bones at the moment. There are many other add-ons I want to try, though, so that will surely change.

The Dwarven Village pieces were a ton of fun and quite the challenge to tackle. Per the node system we are building within Ashes of Creation, I had to design and construct bespoke, modular building sets for use in laying out these scenes. I began in Photoshop, doing orthographic thumbnail sketches to begin to figure out the general aesthetic and structural directions and hone in on a few designs that I felt represented our dwarves well and would work within the scenes I was going to create.

From there, I moved over to blender—starting with simple blockouts to nail down the simple shapes of the huts and buildings.  I then worked to build modular assets that I could use to quickly piece together various structures, which would give me plenty of variety in my concept, and ultimately in the game for players to explore, interact with, and enjoy. After that came some quick and dirty materials. It was actually at this phase that I left blender and began working in Octane.

Nowadays I would probably stick with blender through the whole process unless there was a specific tool I wanted to use, but in any case, you can imagine I would be going through the same process either way.  Once I was happy enough with the textures, I began plotting out the scene. Depending on the situation, I may do some 2D sketches to figure out my layout and composition, but in this case, I had an idea in my mind and was able to quickly iterate within 3D to get the most out of my assets and find the optimal setup to visualize the villages. I find that, especially for architecture work and other designs that are more hard surface focused, I am able to achieve my end goal much more rapidly in 3D, since I can see my work in a less limited way and better understand the interactions between different elements.

After building the scene with my assets along with others that I grabbed online, I lit the scene, added fog, set dressing, etc to bring it to life as much as possible before moving over to Photoshop for the final paint-over. Overall, a pretty straightforward process, which I have tailored to fit my style, habits, and needs.  I looked to plenty of medieval fantasy work, such as The Lord of the Rings and Game of Thrones, for tonal and visual quality reference.

I also researched Vikings and other similar, real-world people groups for design influence and to help me better understand the dwarves' cultural background. It's important for me to see these fantastical races as real people within fully functioning societies that have been around for hundreds, if not thousands, of years. That's where the believability comes from.

If you start making stuff up out of thin air, then it may feel to the players/viewers that it was indeed made up out of thin air and ultimately tarnish the immersive nature of the experience.  This leads to the next thing; prior to entering the industry, I always thought that being a concept artist meant coming up with loads and loads of crazy designs until one of them is chosen that you then turn into some awesome piece of art. While that can sort of happen on occasion, that's not the optimal way to work.

I attended a talk by Mike Hill (you can find some of his talks online) a couple of years back, and one thing that stuck out to me was his view on form following function—not the other way around. This is something I kind of knew in the back of my mind early in my career but didn't adhere to, which, if I'm being honest, made for some surface-level designs.

Nowadays, it's always my goal to design specifically for the needs of the project by carefully doing proper research and development. In most cases, if I do this well, the function of whatever I'm designing will lead to a visual form that is pleasing and interesting to look at, as well as being something I probably wouldn't have thought of off the top of my head. This also ensures that everything is grounded within the specific world you are designing for.  It might seem cliche, but the ability to observe and dissect is one of those invaluable skills that will vastly improve how and what you design.

Whether it's something mechanical, armor/clothing, or even an organic being; everything has a function and a purpose, so practicing the art of observing and dissecting real-world objects and operations will give you innumerable resources to draw from and allow you to either:

1. accurately replicate and repurpose what's already existing or
2. better understand how to design and create something new.

We call ourselves artists, and we are; but even more so, we should see ourselves as designers and engineers and architects and cartographers and that of any other specified field you can think of.  Well, I already mentioned Mike Hill. Other modern-day artists include Iain McCaig, Jama Jurabaev, Sparth, Sasha Beliaev, Te Hu, Paul Chadeisson, Ken Fairclough—to name a very limited number. And historically: Leonardo da Vinci, William Turner, John Singer Sargent—again just a few names to give you an idea. I also look to filmmakers like Christopher Nolan, Stanley Kubrick, Quintin Tarantino, Denis Villeneuve, Roger Deakins, Ridley Scott, Peter Jackson, etc. Inspiration can come from any number of sources and styles, so I try not to limit myself—if you gave me some more time, and I'm sure I could fill a whole book with names.

Father, Artist, Teacher, Writer. I've been using Blender since 2.59. Blender is my obsession, or passion, whichever. I use it to make games, illustrate book, animation, and teach. Blender changed my life and has given me all sorts of opportunities I would never have otherwise had. 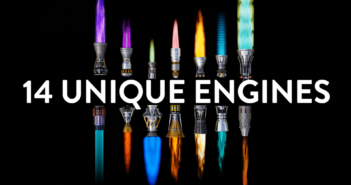 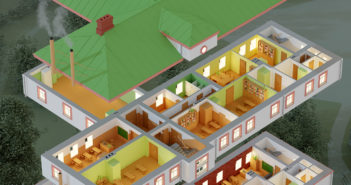 Next Article Behind the Scenes: School Building 3D Layout