Two years ago blendFX worked on a shortfilm by German filmmaker Alice von Gwinner, produced by Hana Geißendörfer from www.gff.film, and finally we managed to put together a little VFX reel, with some examples from the kinds of shots we did for the film.

In part it was (hopefully) invisible VFX, like replacing some paper models of oversized lemons that were used during shooting but that just didn't look convincing, then also a bit of retouching and animation, but the main part of the job was to add stylized boxes on top of the houses of the city were the story takes place.

Being a Blender studio we used Blender, of course. Back then it was still at version 2.79.
What sounded easy at first turned out to be quite a challenge, mostly due to the footage.
The movie, a cute little love story, was shot on an Arri Alexa in LogC with Arri Wide Gamut and a RED Dragon. Thanks to Troy Sobotka we managed to develop a workflow with OpenColorIO that allowed us to use the proper color space in Blender. For more on this I wrote a blog entry a while ago on our website.

The other challenge was tracking the footage. Many shots were shot hand held, some extremely shaky with shallow depth of field, often with the protagonists in the foreground blocking most of the background geometry, so getting a solid track was really challenging. Blender's tracker though was able to track all the shots, and I got a usable camera solution for even the most difficult shots. Just for fun we tried to track in After Effects, but as expected it failed miserably.

I might be a *bit* biased towards Blender's motion tracking, but really, we would have been lost without it.

Here's the trailer for the film: 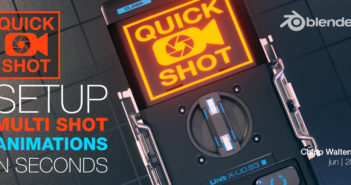