My name is Roman Volkov, I’m an Education Coordinator at PortaOne in Sumy, Ukraine.

I’ve been leading free courses on Linux & Network Administration, Perl, Python, and VoIP in a specialized laboratory for many years. For some time I worked as a Technical Support Engineer and Web Developer.

In my spare time, I like working on personal 3D projects, learning shaders, programming, and game engines.

As for the graphics, it’s a lifelong passion of mine. On my first computer I started to learn 3ds Max, but sometime after that I switched to Blender as an open-source solution. Actually, at first, I had some doubts regarding this product, but after I saw several very clean and cute hard surface models made with it I decided to give it a try. Now I’ve been using Blender for more than 10 years and am very happy with it :)

The idea to model an airplane came suddenly. After I’d completed several personal automotive projects, one of which won “Render of the Year Awards 2017: Best Industrial Render”, I decided to model something of another transportation type. One forum mate in a joking way proposed that I choose an airplane, but that was a really good idea!

Actually I already had a partially abandoned project, “Yak-52,” but decided to model something brand new. 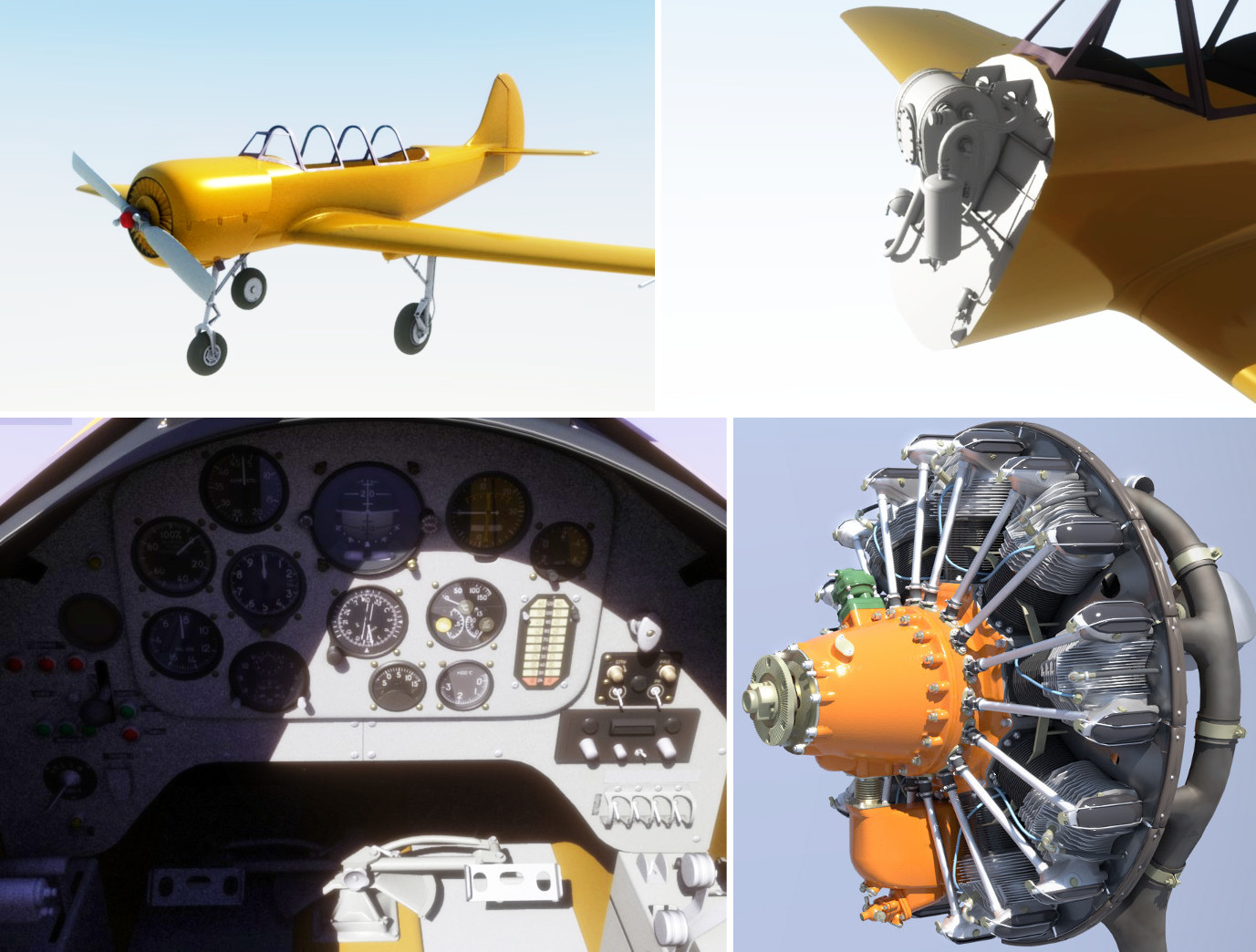 As always, there is a choice between modeling something well-documented (but usually less interesting) and something nice and cute (but with only a few references). I chose the second :)

There are a lot of beautiful aircrafts, but I decided to choose a light aircraft with a piston engine. Beechcraft Baron G58 is a modern aircraft with a good interior (modeling of which is going to be a separate project) and clean smooth lines on the exterior. The interesting thing is that you can get a single-engined Bonanza from a bi-engine Baron relatively easy, and the interiors are nearly the same too.

So, I started to collect references. The blueprints that I had were not accurate and therefore I decided to use photos as a primary source. The good thing is that the plane stayed nearly the same for decades and there were only minor visual changes between different versions (nose section size, engine cowling, passenger doors placement, etc.).

Several good references are usually enough to recreate the main shapes of the aircraft.

But when you go a step further and recreate some mid-size or small details, the number of required references increases dramatically! Now the collection of references contains about 1500 photos of the airplane :)

A big challenge was to figure out the placement of thousands of rivets and welding points. They’re mostly valuable just for close-up views, as they usually affect reflections. But the main purpose of the project was to develop skills, including texturing, so I started my research. :) After processing hundreds of photos the task was almost done. 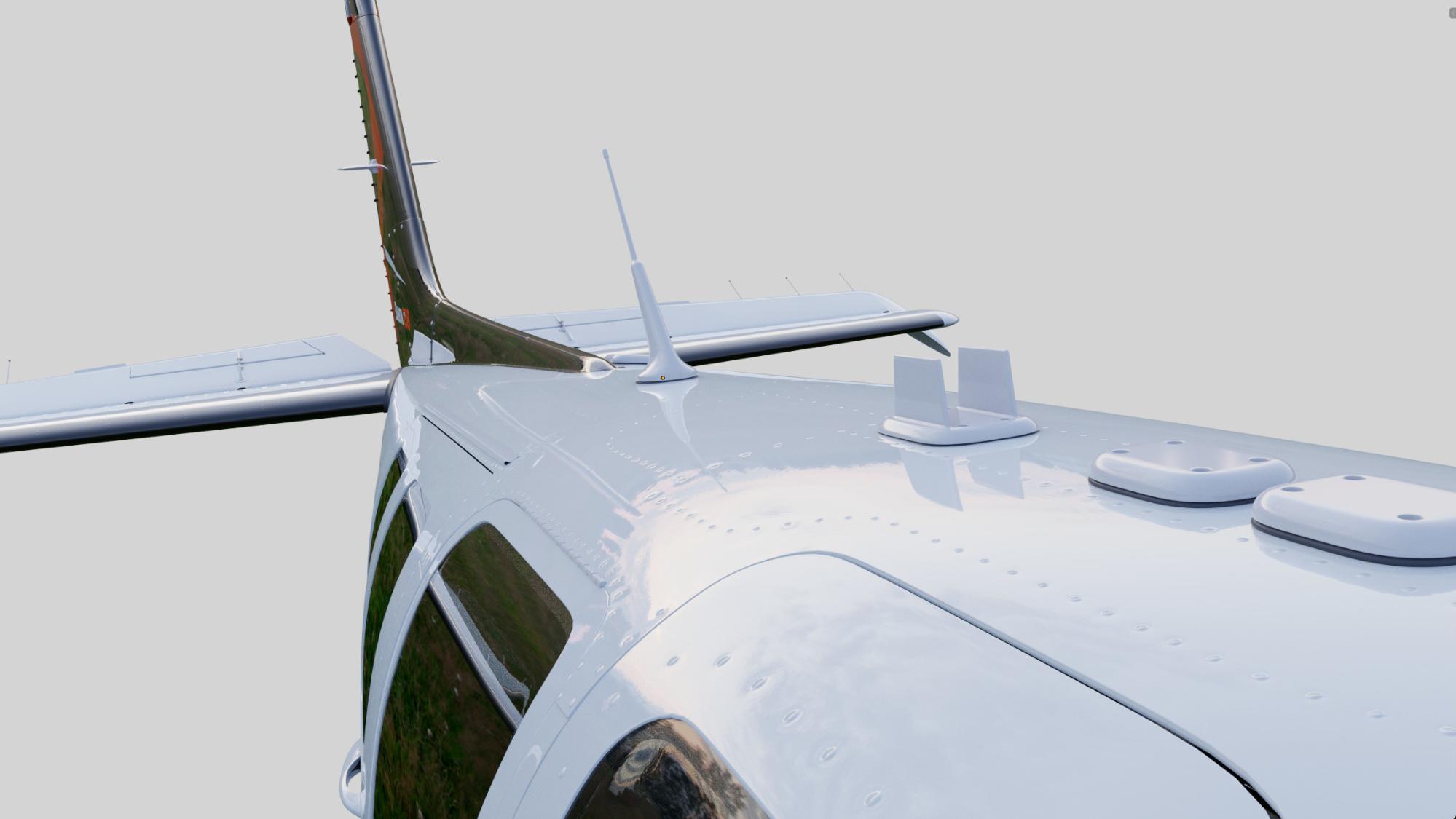 The next interesting thing for me was the recreation of the so-called “oil canning” effect, when a flat sheet of metal has some waviness that can be observed from a sharp angle. I tried to tweak this effect on a bump texture and found a simple but visually effective approximation when you raise or lower areas between rivets rows. 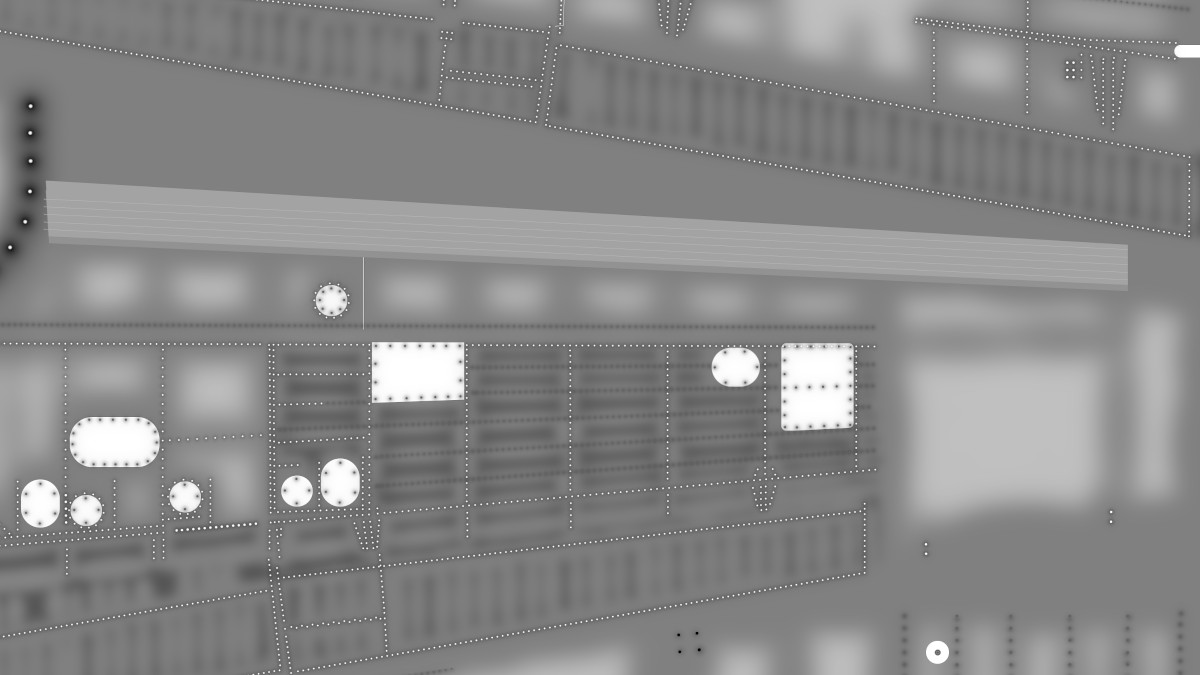 Finally, the aircraft should be painted, and a paint job seemed not so easy.

It was the first time that I had to draw smooth lines that would go through surfaces that were separate unwrapped parts on the texture. My solution was to draw rough lines right in Blender and, after that, polish them externally (I use Gimp for that). The task was done, and workflow was not as painful as I had expected. But if you can propose a better workflow for this, please, share your thoughts in the comments section!

From the very beginning, I wanted to make several renders inside a hangar as it’s very convenient for playing with lighting and reflections.

The first camera view that I imagined, even during the modeling phase, was this: 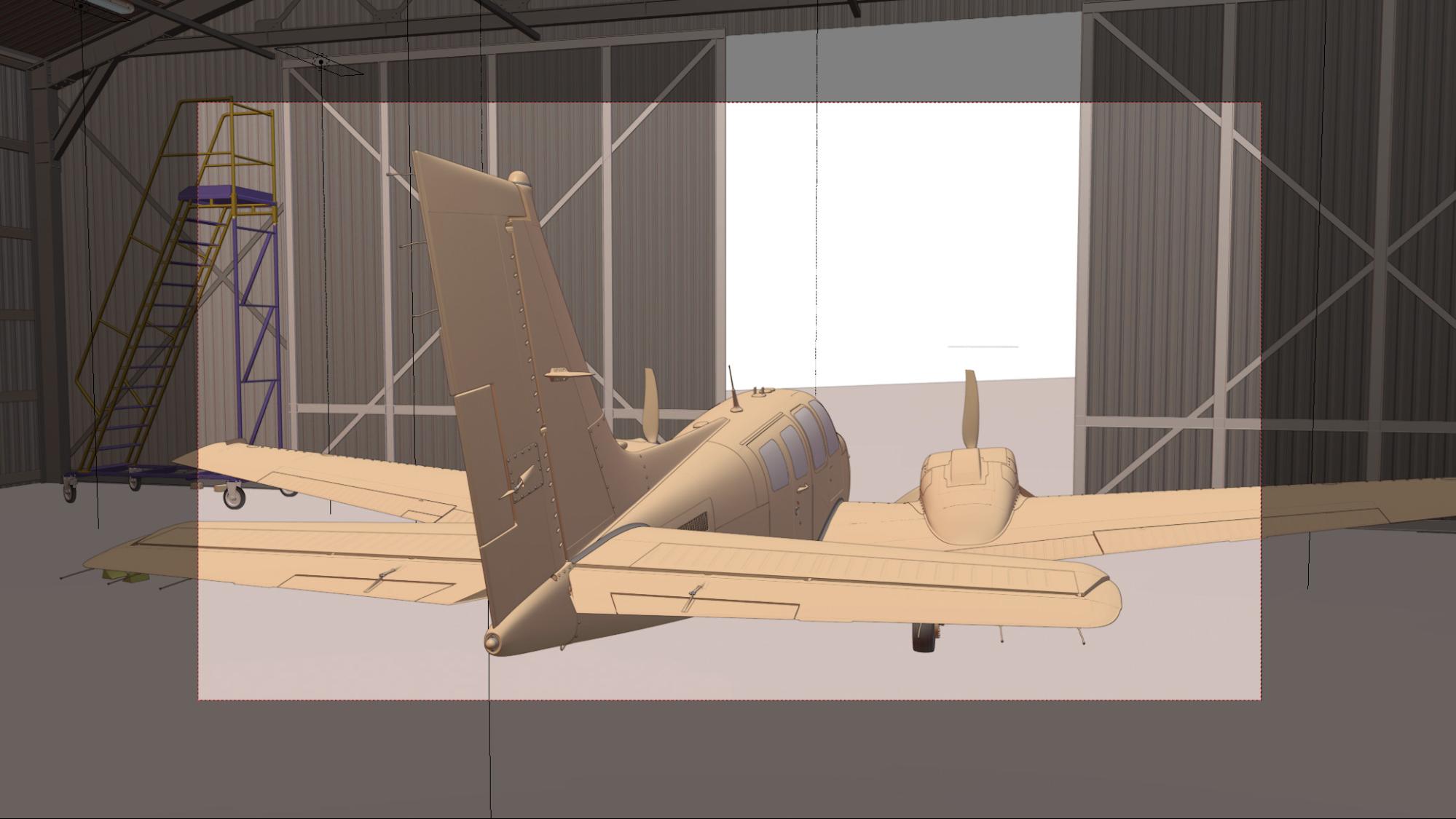 It requires only a few additional background objects and emphasizes the airplane shape.

But after moving the camera around I found another interesting position, in front of the hangar doors.

One of the benefits of the new position was that sunlight could be used to naturally separate the foreground and background parts of the scene: 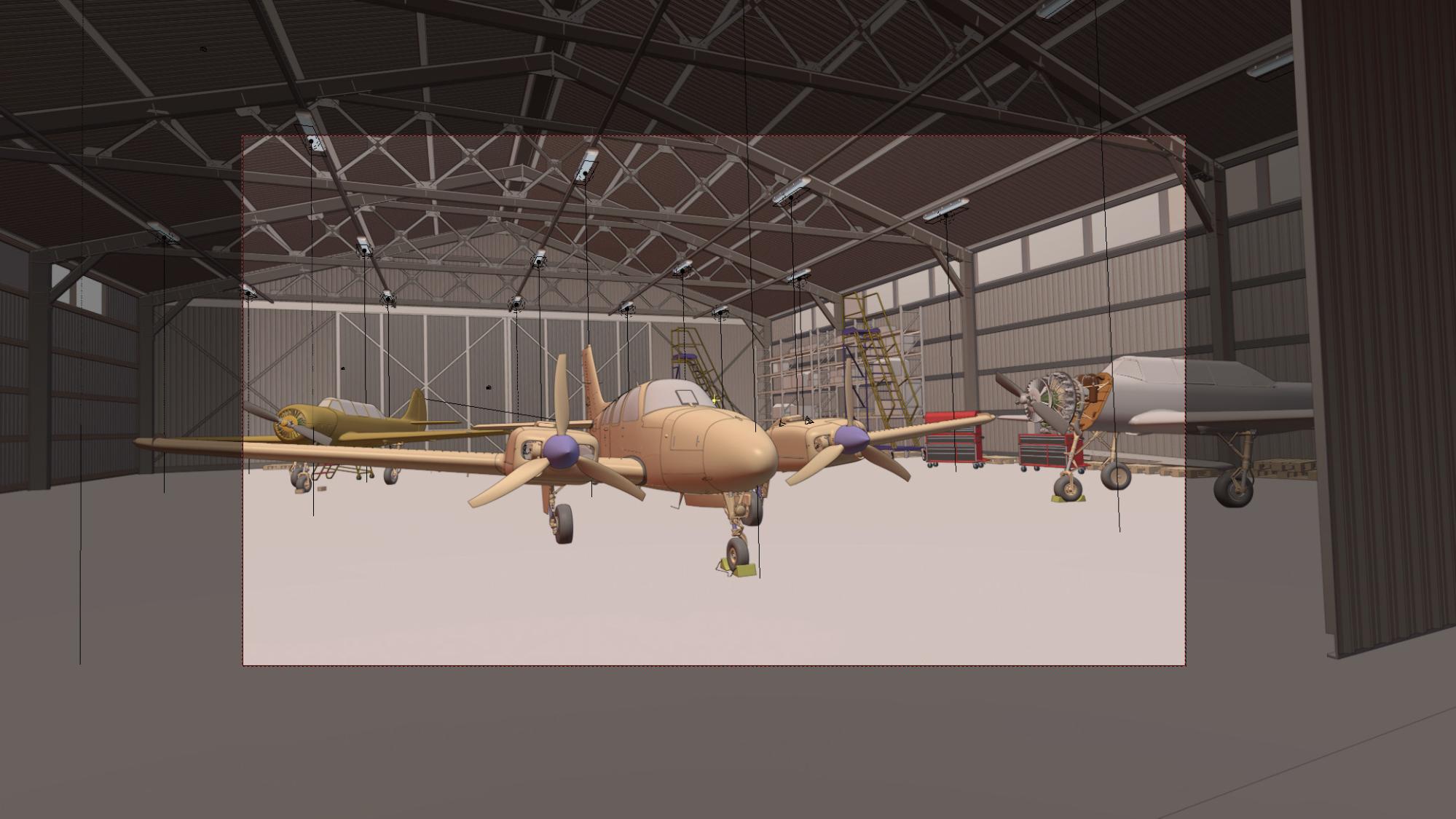 The idea was good, but required that I create a lot of additional stuff. So I decided to dust off an abandoned project “Yak-52” and use it in the background of the scene. The interesting part of the project is that it contains the very first object I had ever made in Blender—the propeller! :) 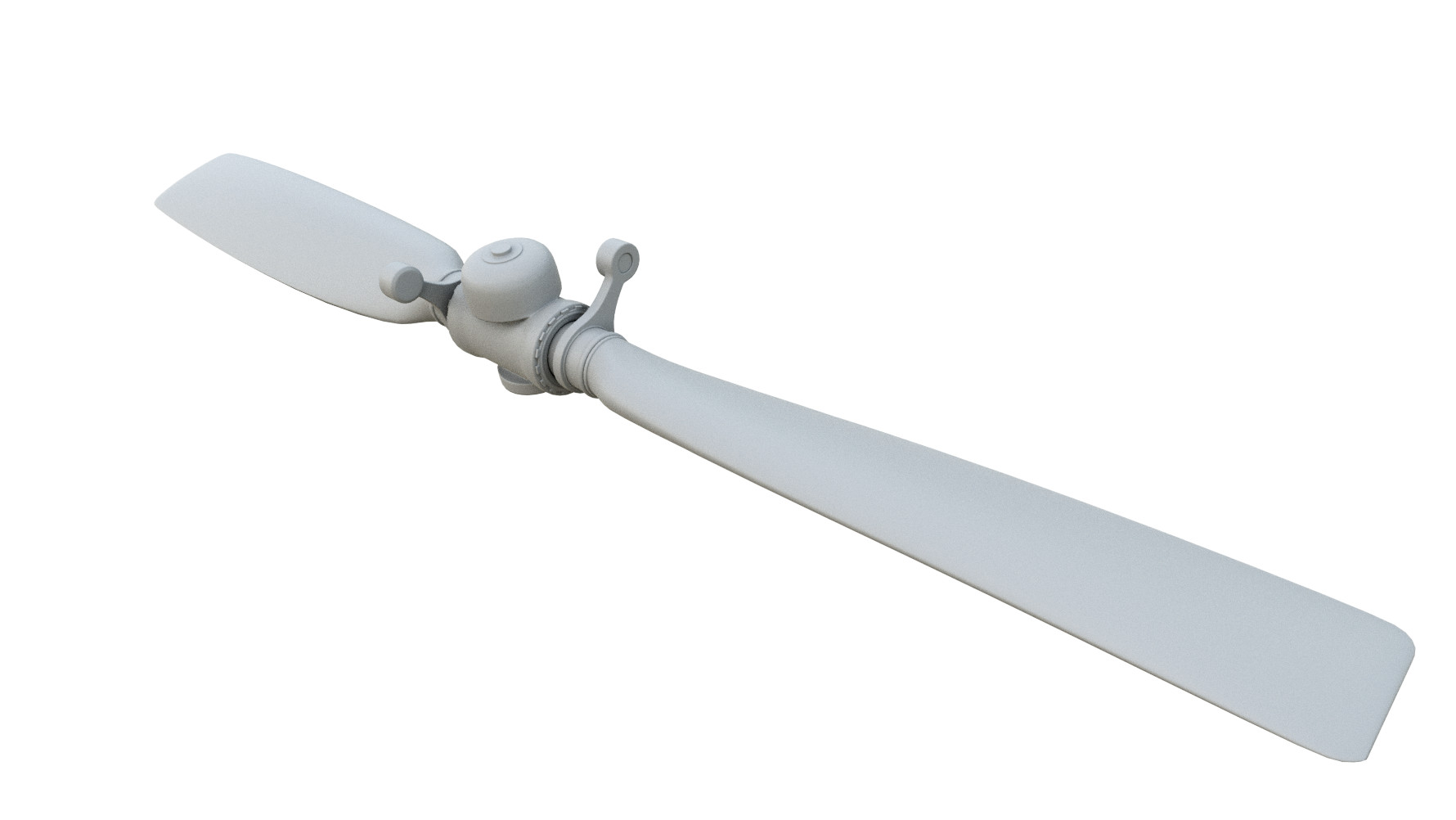 The hangar, shelving, ladders, etc. were relatively easy to create, but there were also more complex objects.

Boxes have a simple procedural texture which imitates adhesive tape and stickers: 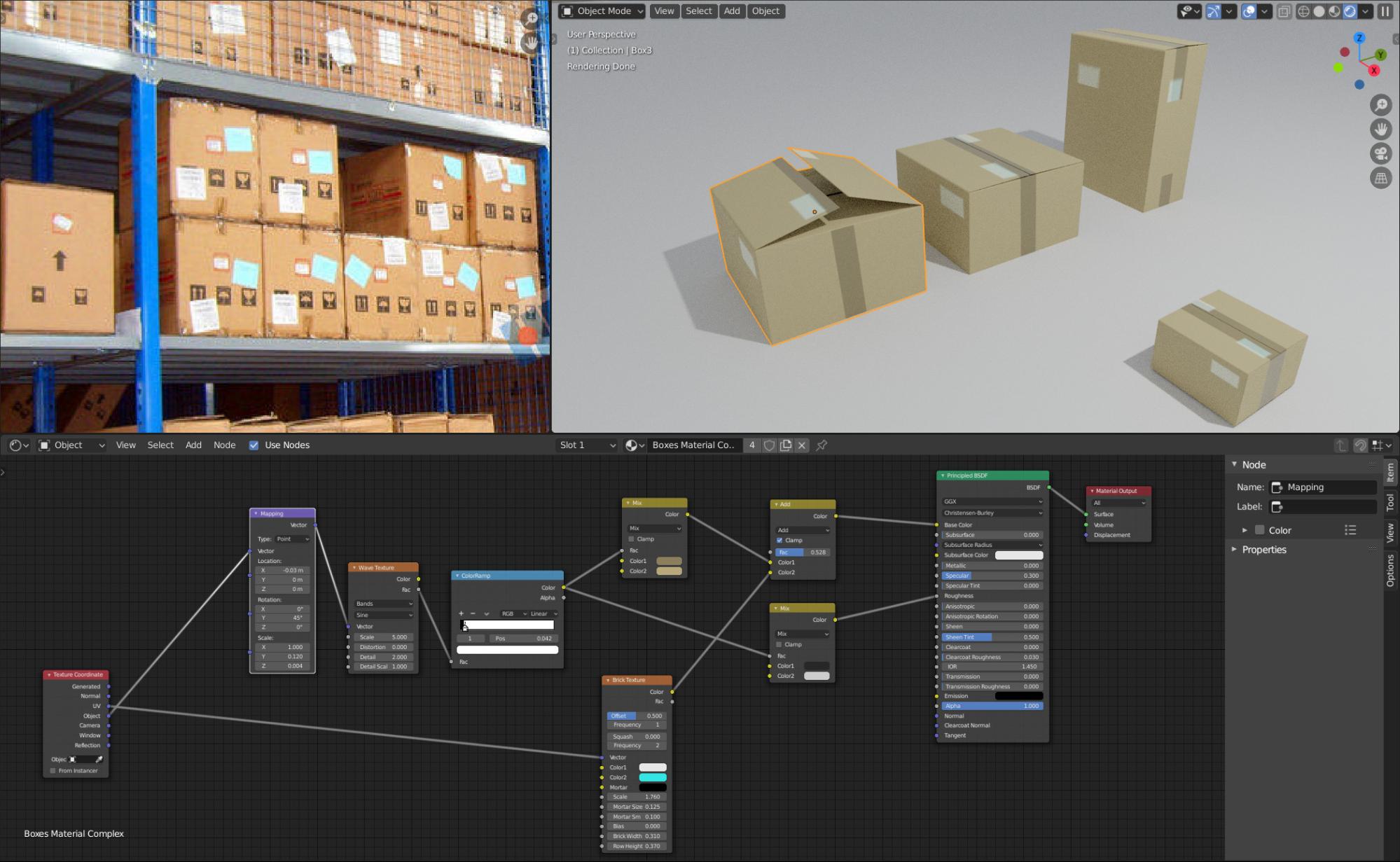 The concrete floor material has two bitmap textures: one for small and one for mid-size details. To break a repeated pattern, I used some procedural elements (large squares and dark areas). 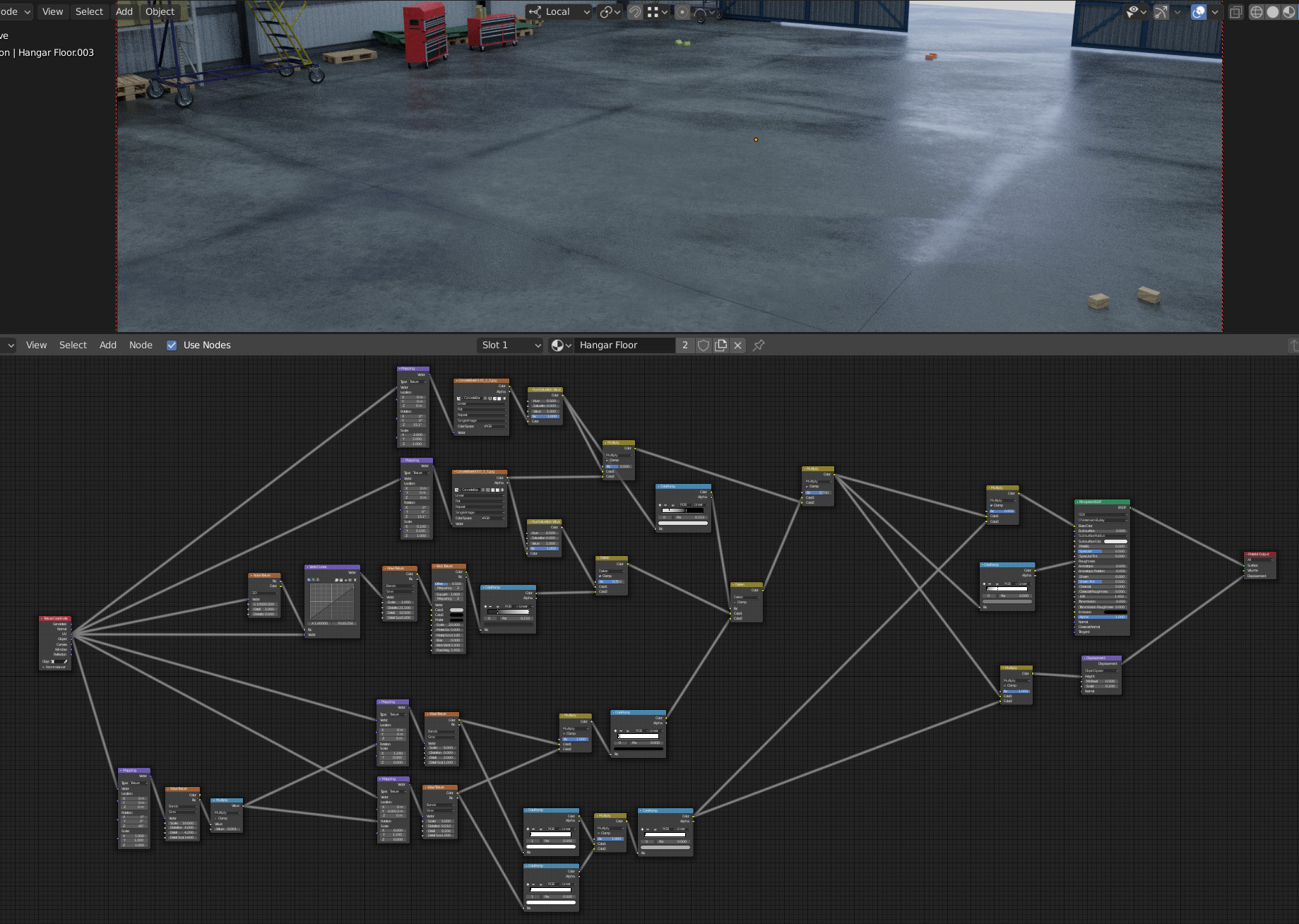 Hangar lamps have their own procedural texture that imitates two light bulbs inside.

The overall view on the additional scene stuff:

The final, but not the easiest, step was rendering. It was necessary to achieve a good balance between indoor and outdoor lighting to create good contrast but not lose details.

The usual “imperfect world” stuff, like lens distortion and white noise, was also used. Actually, instead of generated noise I like to combine the denoised render with the original one.

As for renderers, currently I use Cycles. I really like the recent feature that allows using both CPU and GPU for rendering—it saves a noticeable amount of time! 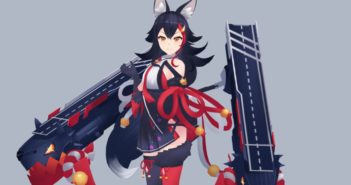 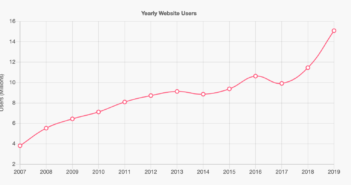 Next Article Blender by the Numbers – 2019