BlenderNation sat down with artist Vaughan Ling to talk about his work on Love, Death, and Robots episode 3, 'The Witness', and how he uses Blender in his workflow.

How many people worked on this / what does your team look like?

We started in LA with our producer Gennie Rim, then Alberto went to Madrid to build out his studio Pinkman.TV where the core team of Spanish artists worked. I worked remote in Los Angeles and we had artists based in Canada, France, all over. Honestly, I don’t know the full scope of the animation team because it just exploded in size at a certain point, but I think for the majority of time the team was maybe 20 people.

What is the concept for your Love, Death + Robots episode, ‘The Witness’, and how did you all come up with it?

It’s a fantasy chase with a bit of Black Mirror twistiness to it. A lot of the episodes were based off of existing stories but I think this ('The Witness') and one or two others were original stories. So that was a nice thing that Alberto got to do his own thing on this project.

How do you get your animation on Netflix? Did they commission it?

One of the directors from LDR reached out to Alberto, they were a fan of his previous work.

The episode has a very unique look that is reminiscent of Alberto Mielgo’s other work. How did the look of the episode develop and how did you all want the look to contribute to the overall story?

There’s a lot of graphic reduction in the visuals, but at the same time it’s almost eerily real because the painting and the lighting are so spot-on and the animation is so, I guess, lifelike that it trips people up sometimes. So that was kind of cool to see. The simulation, animation, sculpting, and painting all come together to create this alternate reality which I think the audience was really not used to seeing!

What sorts of references did you use to develop the characters and environments?

Alberto and Lucia, our fashion stylist, are really into street fashion, Instagrams, blogs. They keep on top of current stuff. The environment is based on Hong Kong. Alberto took a trip there and got lost for a few days with his camera. There’s some Russian influence, weird sci-fi neon-y type stuff, also. Some of the show’s fans in HK have actually gone out and scouted all the locations. They’ve put together compilation videos where they’ve found every spot. A lot of the interiors are European, they’re jumping around a little bit, but for the exterior stuff, it’s mainly a love letter to Hong Kong.

Did you animate the characters by hand, or did you use motion capture?

Everything is animated by hand, there’s no rotoscoping, no motion capture. It’s based off of real reference material, video material of animation, but the animators are recreating it by eye and feeling.

How did you use Blender in your creation process? Did you use it in conjunction with other tools to create the episode?

I was in charge of creating what I would call 3D paintings, using Blender. These 3D paintings were only used for shots that required a lot of camera movement. First off, it’s a lot of painting involved, maybe 80% of what you see on screen is straight painting, arranged in 3D space. The other 20% is reflections, shadows, CG elements, FX cards blending between seams, etc., so hopefully the viewer really feels like they are moving inside a painting.

These were modeled and rendered in Blender/Cycles. The tricky part is that characters were done in Maya and rendered with Arnold, so we had to figure out how to combine the two convincingly, which isn’t as simple as just rendering both out and layering them on top of each other, because the character has to interact with the environment in terms of lighting, shadows, and reflections.

To achieve this, we were rendering the sets in Blender with some overscan, which was then projected from the camera onto the same geometry that had been imported into Maya. By recreating the 3D painting in Maya, we could get the correct lighting information on the characters as well as reflection/shadow passes to be comped over the BG.

Vehicles were also created and rendered in Blender but were a bit simpler and more self-contained because they didn’t interact with characters (except for the taxi interior, which was treated as a set).

How long have you been using Blender? What made you switch to Blender?

I’ve been using it consistently since 2013. I switched from MODO while working as a visual development artist for Spiderman: Into The Spiderverse. We were doing some really crazy interior sets that were becoming slow to render in MODO. I was looking for a faster way to do little animations and renders which led me to “Oh, Blender has a free GPU render, okay let’s try that.” Then I got tired of importing/exporting all the time so I thought maybe I can do a little bit of modeling here in Blender. Then it became, oh, I really miss this feature from MODO or the way this works in Blender is funky, let me try to tinker around with Python scripting in Blender. Then it kind of snowballed from there. So ever since then, I’ve been doing scripts and pie menus and just millions of ease-of-use things to make Blender comfortable for my kind of work. And now I’m relying on Blender for all my daily work.

What Blender features did you use a lot or find particularly valuable during your process?

The number one thing I remember impressing me during my switch from MODO to Blender was the GPU render. It was just way faster. The number two thing was the modifiers, especially boolean modifier because I use that stuff all the time. And solidify, and all the modifier stuff. At that time MODO didn’t have a procedural system yet so that was all completely new to me. And that allowed the models to be much more flexible and lightweight. I could change designs and try new things without destroying the model. I would say those are the two big things for me.

How long did this project take?

I think I was working maybe 6 months or so. I think the project was about a year of work for everybody. I think.

'The Witness' recently won two Emmys for Outstanding Short Form Animated Program and Outstanding Individual Achievement in Animation. How does it feel to receive that sort of recognition for your work?

It’s really cool to see it all happening! I’m gonna give a lot of credit to Alberto. Honestly, he’s probably the hardest working person I know, and he’s been through some setbacks over the past few years so it was especially nice to see this project getting this kind of recognition. I’ve been really lucky to be able to follow around for the past few projects and I feel like the team is kind of growing together, so that’s nice. Also, it’s been fun to see all the amazing cosplayers taking up the characters, and even a porn based on 'The Witness'!

What are you working on now? :)

For the past year or so I’ve been working on a painting app called HEAVYPAINT. It’s designed for plein air painting on your phone (or tablet). It’s pretty minimal and the UI is heavily optimized for painting, making shapes, mixing colors...it’s extremely efficient at those things. It’s gouache in your pocket. It’s on the app store and Google Play. You can also get Windows/Mac/Linux versions on my website.

I feel like this year seems like a turning point for Blender especially in terms of industry support. And we’re actively trying to make that happen in our own little projects. I would say, if anybody out there is thinking about using Blender in production, go for it! And watch out for more stuff from Alberto & Pinkman.TV soon! 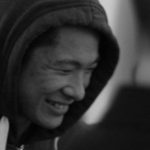 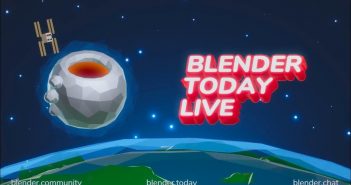 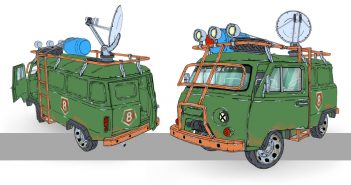