My name is Mike Strassburger and I live in Seattle, Washington. I’ve had my own design firm (Modern Dog Design) with a partner since 1987. I am now working at the Seattle Aquarium, started my own side company, Living Fancy—and am semi-retired. I also love my wife ❤️.

During my years at Modern Dog we did a wide array of work, some of it 3D—mostly 3D typography and similar. At the time, I used Cinema 4D...but it was so long ago that I’ve forgotten everything.

I don’t know why, but in March of this year I got a very strong urge to work in 3D again, and I knew Blender was free. I had tried it before but was overwhelmed by the initial learning curve—especially since the way tools worked felt so foreign to me (I’ve been using Adobe products pretty much all of my life professional life). Nevertheless, I checked out Blender again and saw there was a new beta version 2.8, which is built a lot closer to the Adobe products I’m familiar with. So I just jumped right in and did the nine-part intro tutorial series (donut and cup) from Blender Guru. Once I got through that, I couldn’t wait to start making my own things.

First one was a whiskey old-fashioned (my favorite cocktail, and the ones I make at home rule the world). I spent days trying to figure out how to make the glass look proper and finally felt satisfied enough to move on to something else. The next project was a guitar foot pedal, another familiar object from my home.

I was blown away by what could be done within Blender and became obsessed with detail while working on these first two projects. I really loved the idea of making something look so real that you really can’t tell that it’s 3D modeling. Although happy with my cocktail and guitar pedal, I knew they could be better and that the lighting wasn’t good.

With a couple projects under my belt, I couldn’t help myself and had to build a blender in Blender! (I know that’s cheesy.) I grew up with an Oster blender (I’m old) so I really wanted to recreate that in 3D and situate it on a bright 1970s kitchen counter—just like I remember. 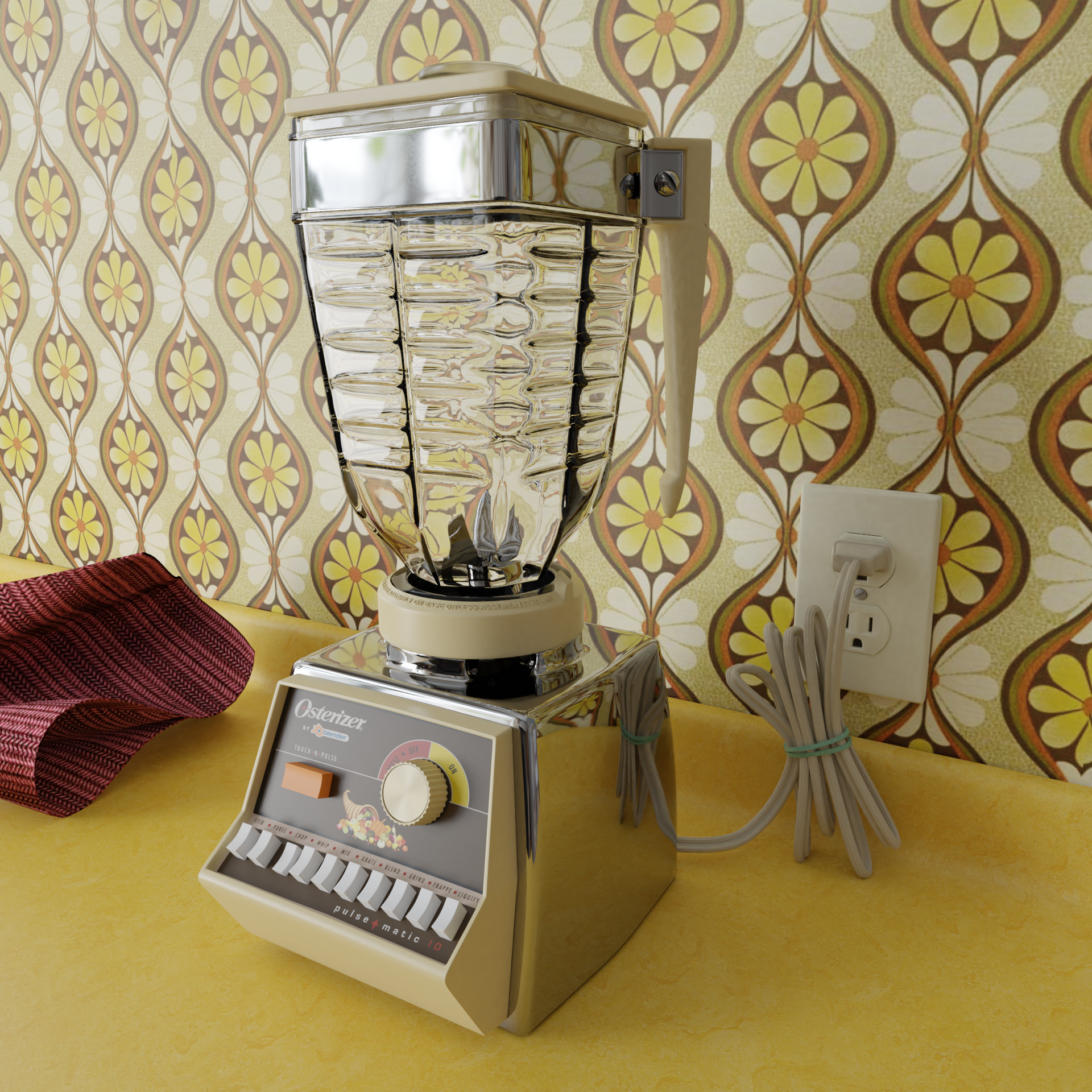 Full disclosure: I was obsessed with learning Blender and my learning process was very fast-paced, so I’ve already forgotten many of the finer details. But in looking back on the project, I believe I’m recalling all the big important things. 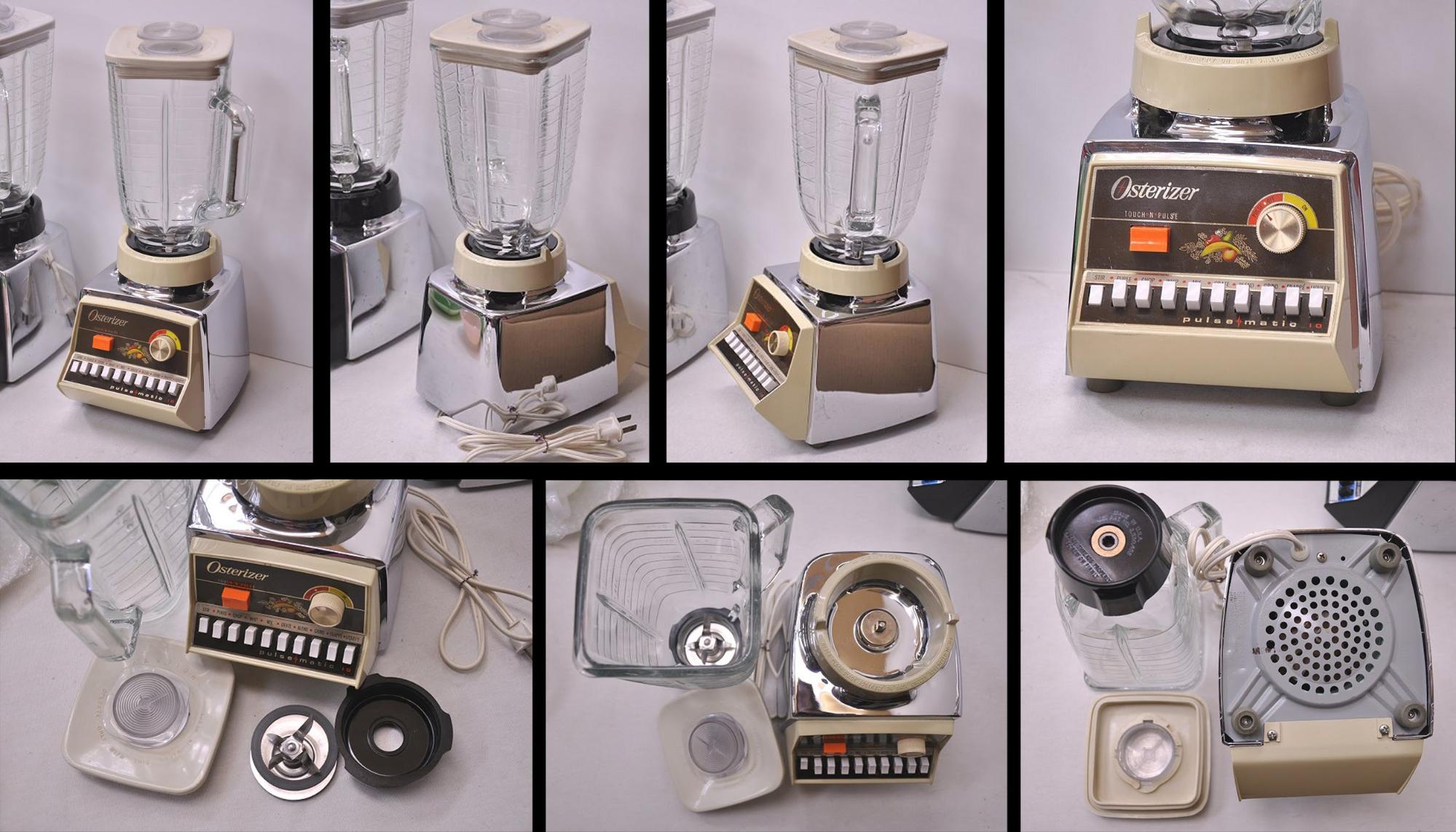 Photos of a blender I found for sale online.

I started with the chrome body because it looked relatively simple and I could build everything else from that, dag nabbit! 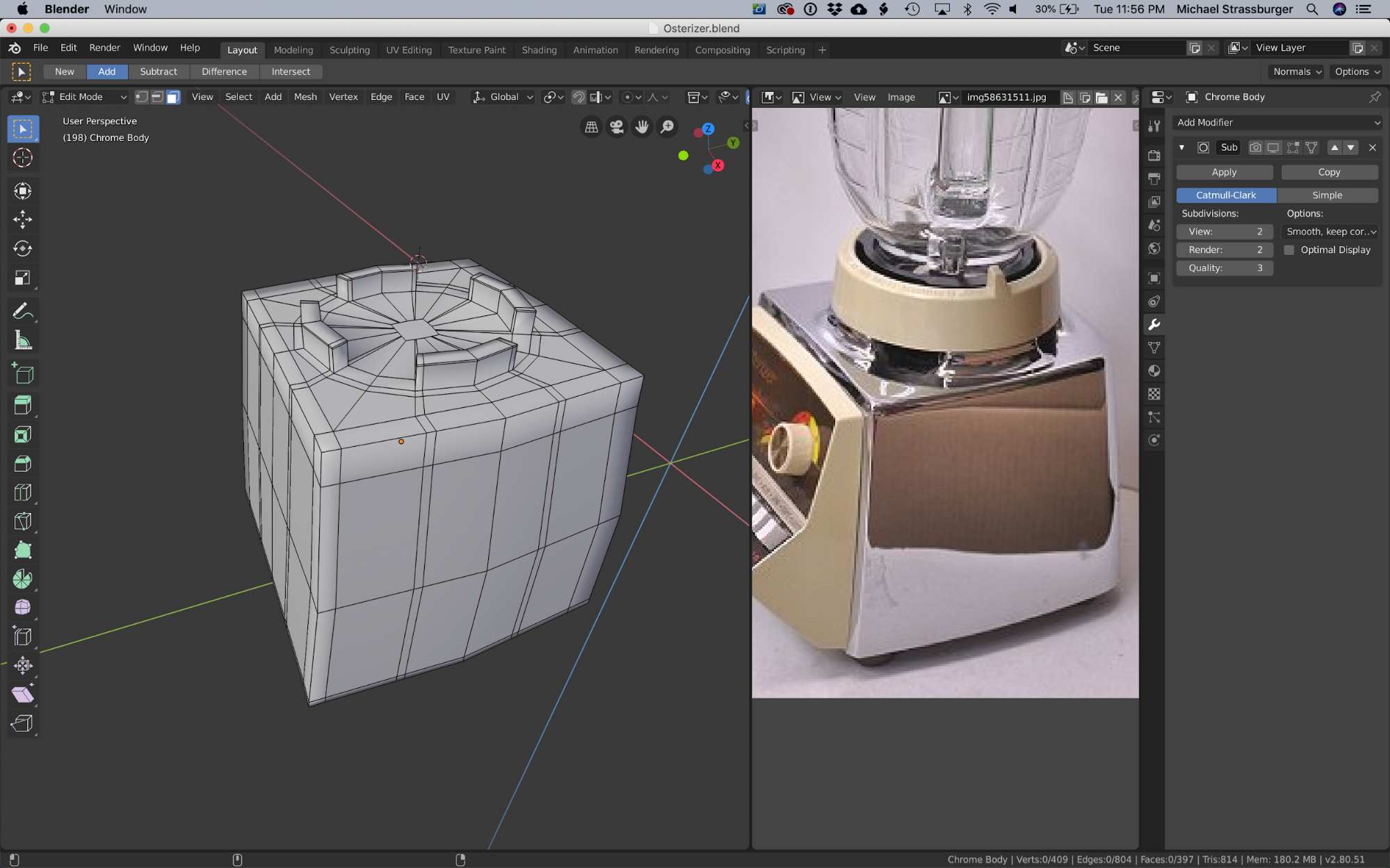 Modeling the base (left). Using the window to the right for reference as I worked.

The second step was to duplicate the chrome body so that I could build the plastic control panel off the copy without messing up the original.

Duplicated chrome base I used to extrude the front plastic housing from.

And the plastic on its own after deleting the duplicated chrome base.

The jar, although it appears complicated with all the lines on the outside, was actually not all that difficult to model. Making the glass thick like an actual blender jar really makes it look real in the renders. I did cheat it a little bit, in that the original blender jar had a glass handle that I didn’t want to figure out, so I found another jar that had a chrome strap and plastic handle. 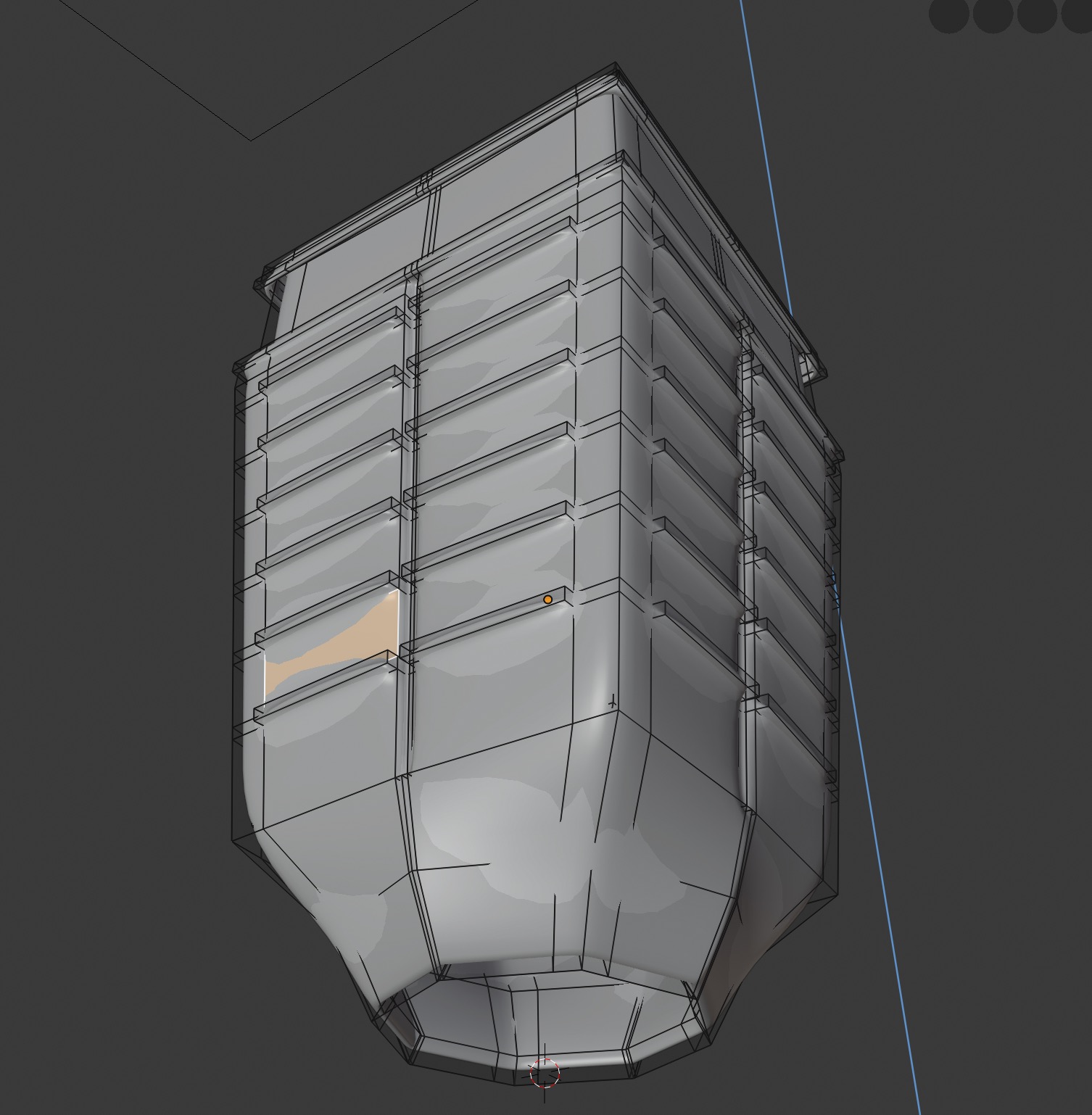 Wireframe of the jar. All the bumps aren’t perfect, but close enough to feel right. 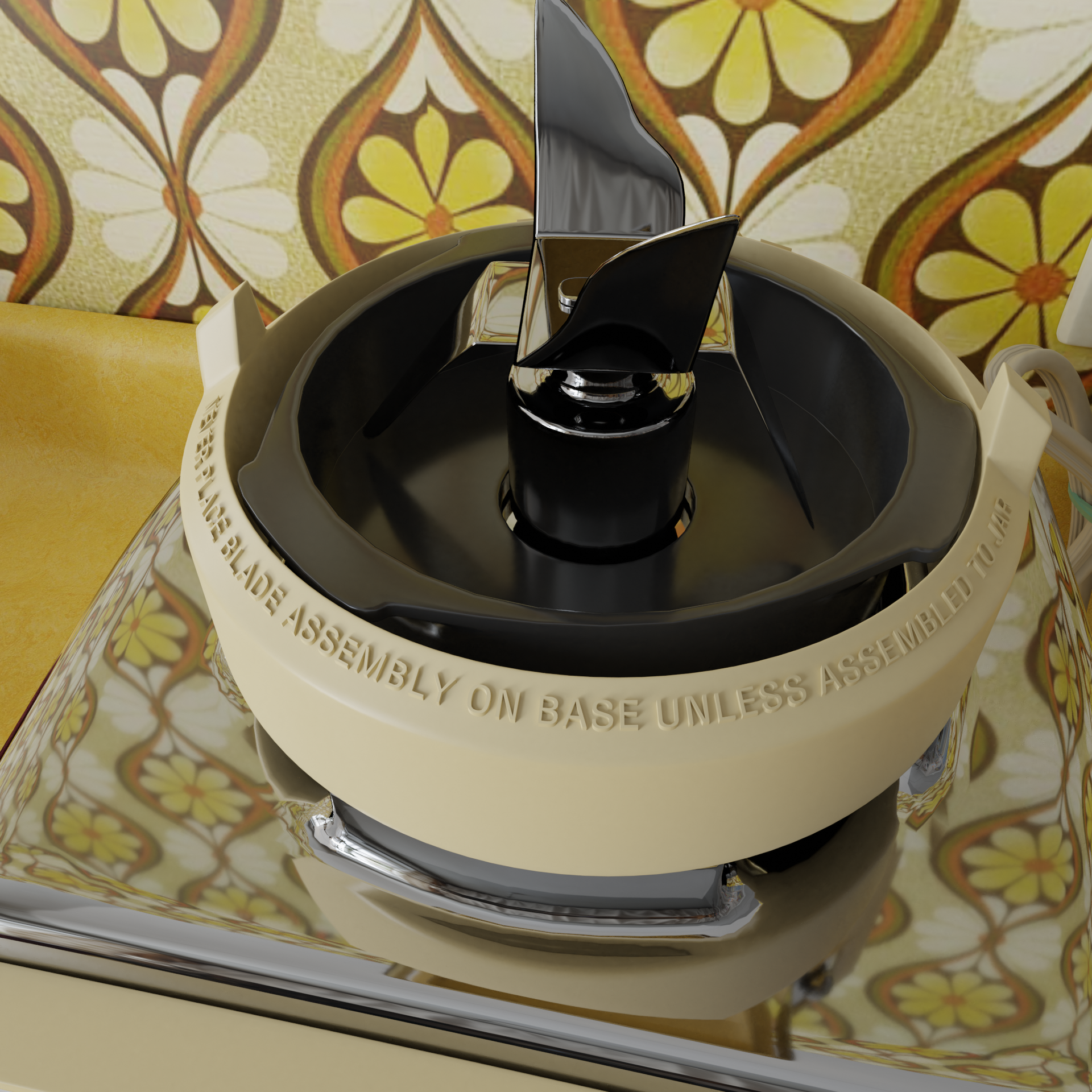 One particularly difficult thing for me to model was the type on the collar of the jar base. I had to create the type on a flat curve, position it directly over the collar and “shrinkwrap” it.

Type on a ring floating in space above collar.

Another really important part was choosing the right HDRI background. I couldn’t find a good kitchen one and settled on one of an artist studio, called artist_workshop_2k.hdr.

HDRI background that felt the best for renders—even though it’s not an actual kitchen HDRI.

I spent a lot of time getting the lighting right, for heaven’s sake! I started with way too little light and kept adding lights and bringing up the emission strengths. Ultimately I settled on one small area lamp set super-bright with an emission strength of 85,000, with three other, much larger, area lamps at lower emission strengths to act as reflected light. Those, in combination with a good kitchen HDRI background, really helped it feel real. 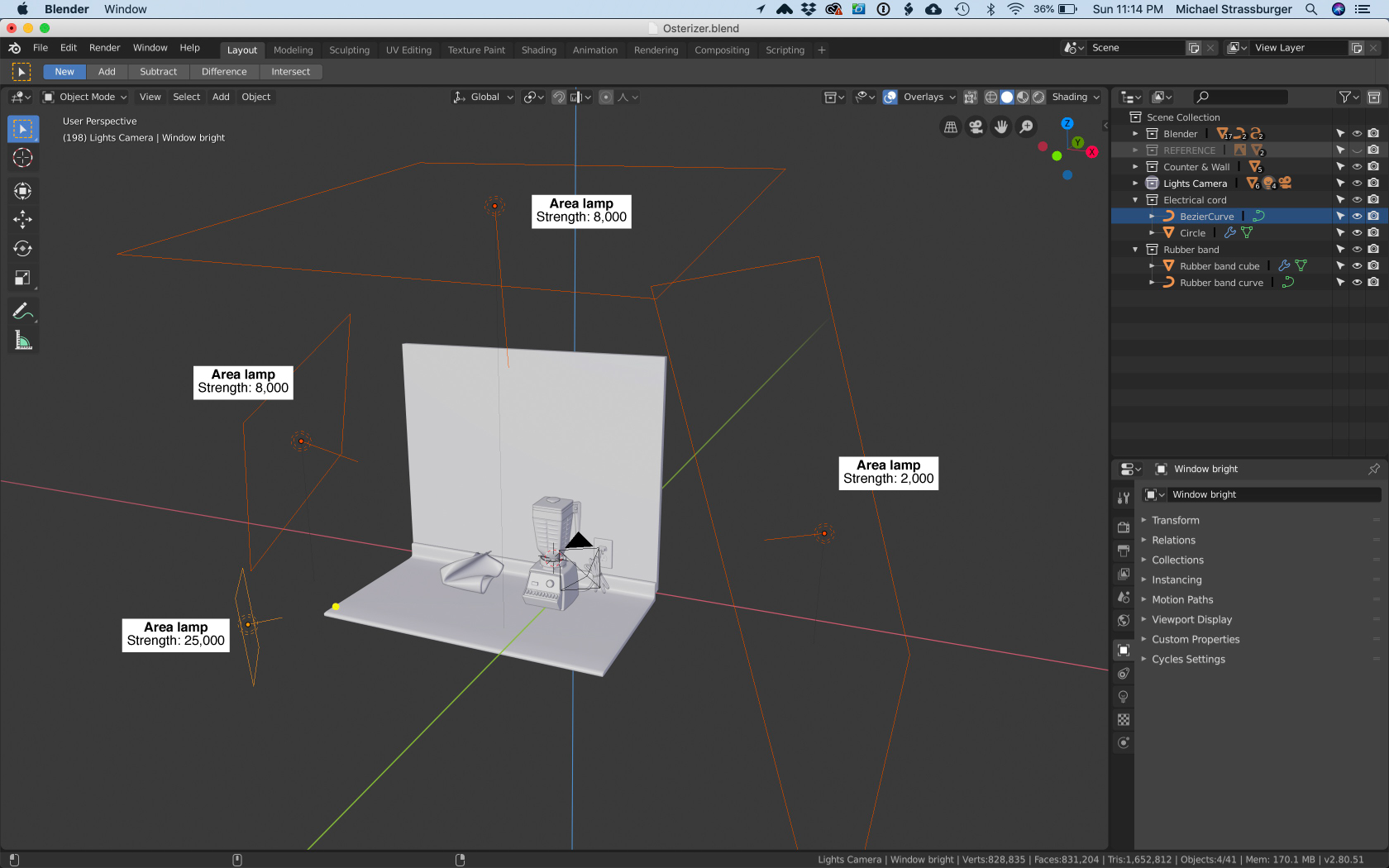 The four area light sources I used. The smallest one acts as the “sunlight” and the others are acting as reflected light.

The blender itself has three main materials: plastic, chrome and glass. They were all pretty basic shader node setups.

As a graphic designer, one of the more natural parts for me was reproducing the control panel faceplates. I used Adobe Illustrator to put these together, and I used a piece of clipart for the cornucopia, no lie! I added the Blender logo as a final touch. 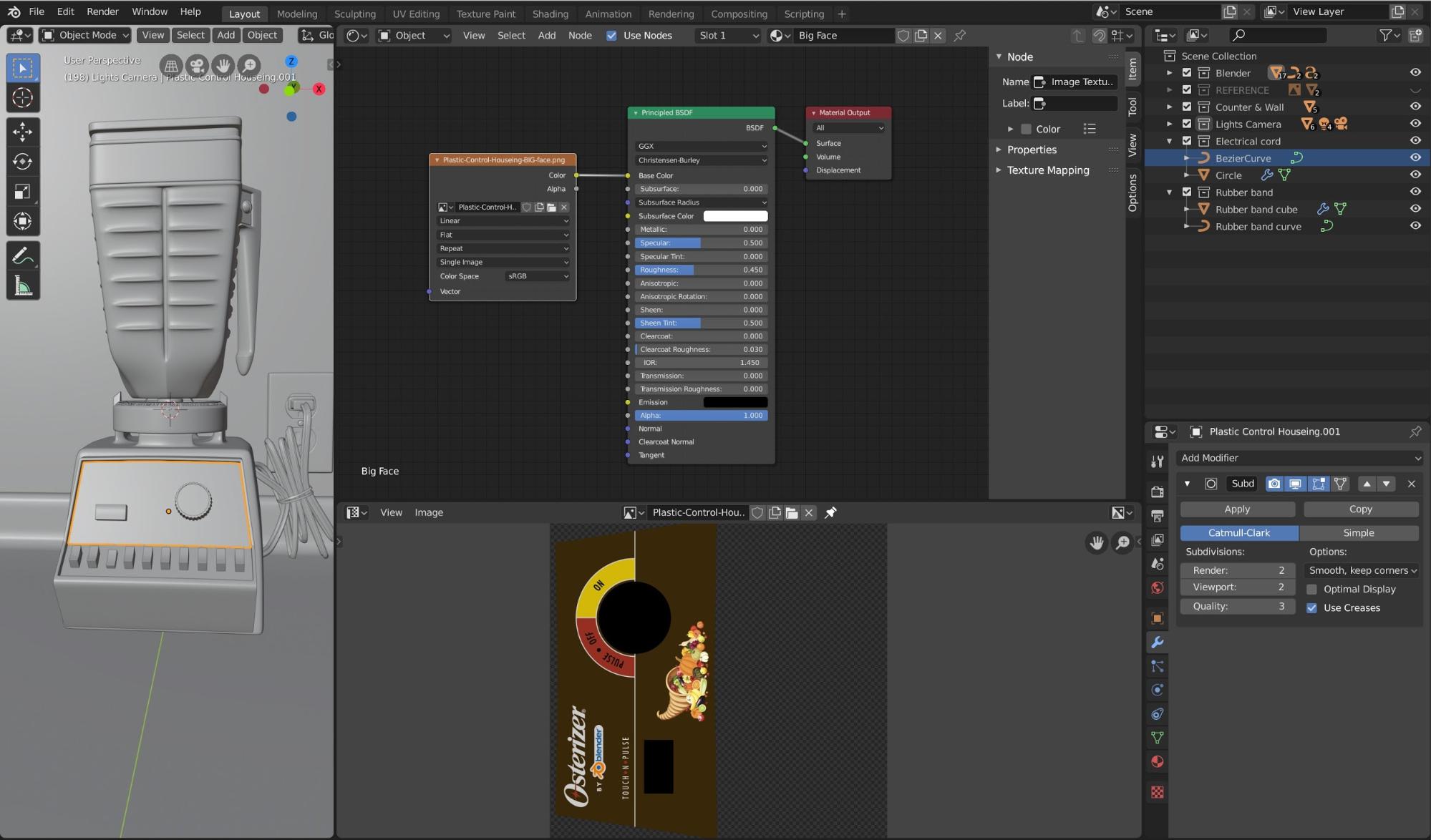 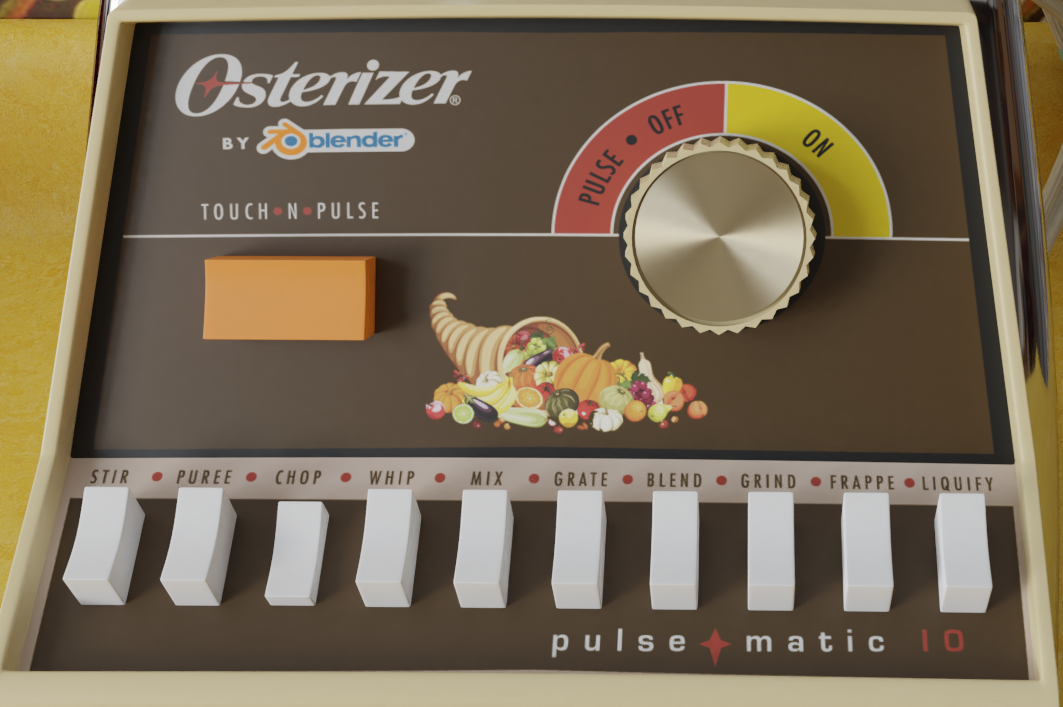 Final control panel (just realizing now I forgot to put the red indicator line on the knob! And why didn’t I have “BLEND” selected??!!).

These are the textures I used for the wall and countertop. They were googled images I found and liked. Boom!

The wallpaper is an actual wallpaper from the ‘70s.

The countertop is a Marmoleum sample.

I rendered the scene dozens of times. Early renders were just for checking materials, etc. In later renders, I was really looking at the scene overall for believable reality. I would end up making tinier and tinier adjustments until everything felt completely real to me.

Here’s a bunch of renders:

Checking the glass and plastic.

Repositioned items and got close to final lighting.

I quickly figured out that colors are very important for realism. I started with brighter, stronger colors, then kept dialing them back to be a lot softer—then things suddenly started feeling way more real, boo yah! The counter and wall are still kind of bright and loud as expressions of pattern and color, but the final rendered colors are on the softer side.

One of the last things I cleaned up was the cord. I worked hard to get the cross-section right.

Also, the color and initial positioning of the cord bundle was very stiff and looked fake. So I dirtied up the color, roughed up the coiling of it, and then dropped the whole bundle and let it sit at an angle.

The only piece I would still like to fine-tune is the plug, by golly! I really wanted to do a more detailed plug like the photo on the right, but I got lazy at the end.

Actual plug I wish I modeled.

Ultimately what became important for me is attention to detail. Textures, colors, lighting, constant examining, looking again a day later with fresh eyes. And then being willing to keep making changes. Of course, that’s a never-ending rabbit hole and even while putting together this article I saw lots of things I’d still like to change. But you gotta stop sometime! 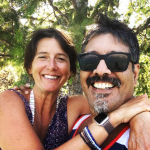 Mike Strassburger, I live in Seattle, Washington. I’ve had my own design firm (Modern Dog Design) with a partner since 1987. I am now working at the Seattle Aquarium, started my own side company, Living Fancy—and am semi-retired. I also love my wife ❤️. 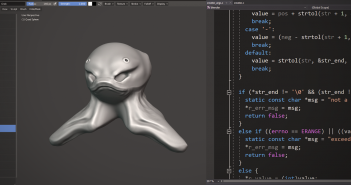 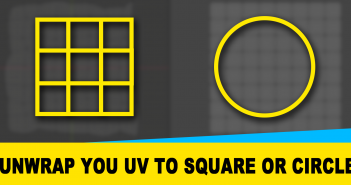 Next Article Blender Tip: Unwrap Your UV to Square or Circle