Hello, Blender users and geeks! My name is Martin Klekner and for the past few years I have been working as a CG Artist and a Cinematic Artist based in Prague, Czech Republic. For as long as I can remember, I have been a fan of history, especially the medieval and ancient period. I loved reading about great battles, thrilling historical events and life stories of people long gone.

Bringing these historical moments to life were, of course, movies like Gladiator, Kingdom of Heaven, Troy and 300 and to some extent Lord of the Rings. Slowly I realized that making moving pictures is probably my best bet on bringing history back to life. So I started with studying films at school and making my first videos. You can read more about my story here, in this BlenderNation Meet the Artist article.

Long story short, I ended up dabbling in visual effects in a company called UPP and then used the experience I gained there to fuel my freelance career. After making some personal projects set in medieval history, I had the great opportunity to work as a Cinematic Director for Warhorse Studios, leading a team of excellent artists creating cutscenes for the medieval RPG Kingdom Come: Deliverance. That was a huge experience for me!

One of the cutscenes I assembled for the medieval RPG Kingdom Come Deliverance.

Soon after we finished Kingdom Come, I decided to leave the company, and pursue my freelance career some more. That’s when I realized I wanted to leave the Middle Ages period and start a project set in Ancient Greece, a period I love by far the most. You know, Leonidas, Thermopylae, Marathon, Athens versus Sparta, deadly hoplites and extravagant Persians… all that good stuff. Also, Rome: Total War - that game inspired me a lot!

So, I started - where else, with some research. I bought a ton of books, from historical fiction (The Long War series, Gates of Fire and many others) to pure non-fiction (The Western Way of War, Persian Fire, Phalanx versus Legion, etc.) and even books by ancient authors (Herodotus, Xenophon, Thucydides). From my days at Warhorse I learned a very important lesson - when you work on a historical project like this, your best bet is to research, research and research. Not only do you not make stupid mistakes then, but also, you get a ton of inspiration for free. Real hstory is often much more fun than a fantasized fiction!

Some of the books that inspired me as well as taught me a lot about ancient history.

This way I learned for example that Spartans didn’t really march into battle half-naked during the Greco-Persian wars, instead they wore the heaviest gear of the ancient world. That they did not use lambdas (the A shaped symbols) on their shields until much later in the 5th century BC. I learned that their shields were not all-bronze, instead were made of wood and only coated with a thin layer of bronze. Also I learned what material the hoplite armor and clothing was made of, which helped me when texturing my assets in Substance Painter. Everything I’ve learned (and still continue to learn) I try to use in my project. 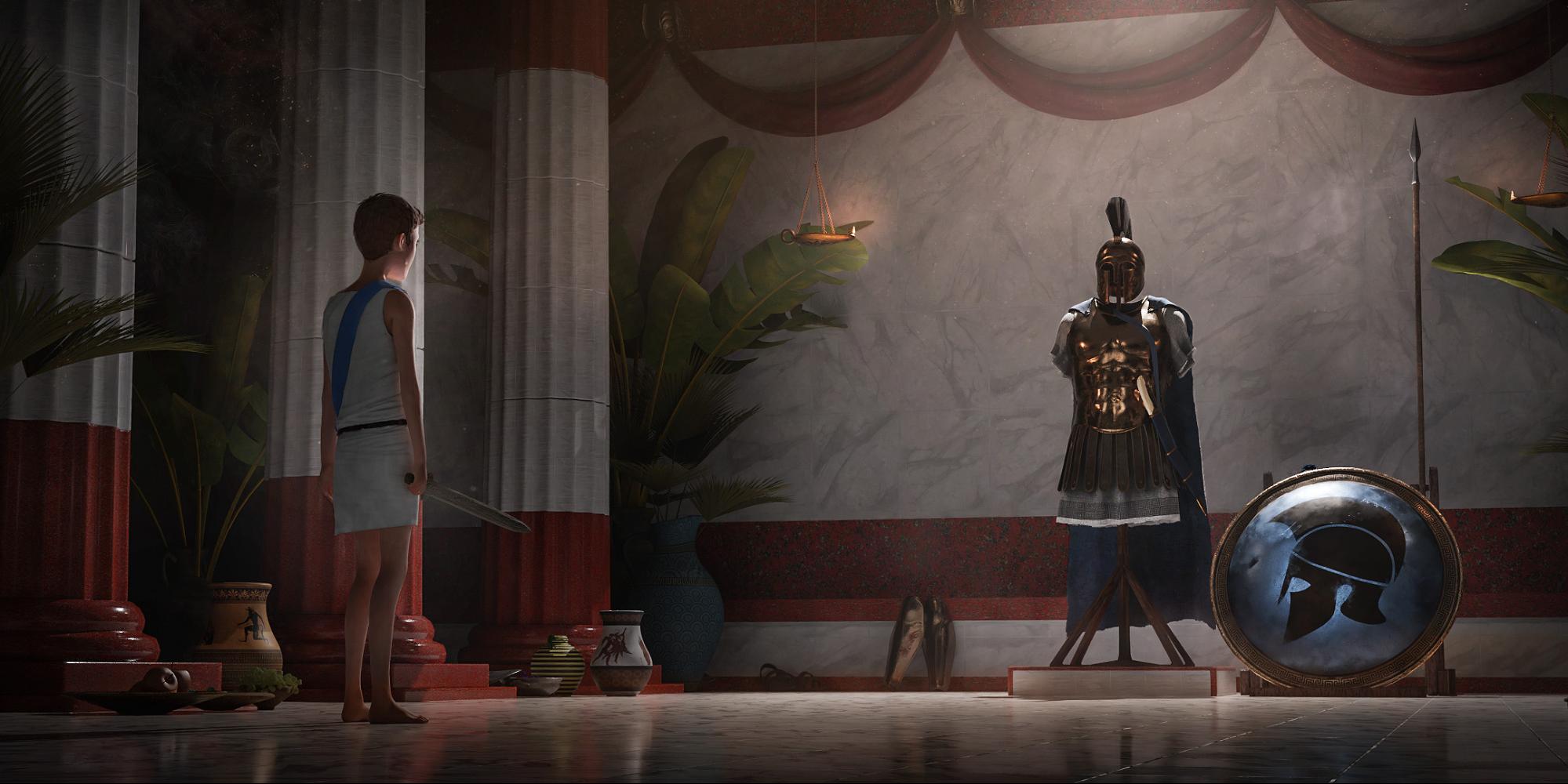 One of the first 3D concepts I created for the film, teasing a key scene of the story.

The plan for this project, which I’ve titled Heroes of Bronze, is to make a proof-of-concept short film, showcasing a bit of story but mostly the most famous moments of the Ancient Greek history between 490 BC and 479 BC when two major battles occurred - the battle of Marathon and the battle of Plataea, both deciding the fate of free Greece (and the whole western part of the world) for centuries to come.

In June 2018 I started working on my first assets, putting together ancient armor, helmets, shields, all sorts of weapons as well as temples, statues and ships. I learned a ton working on these assets and you can actually watch some tutorials and behind the scenes over at my YouTube account, where I decided to document my progress. To test my skills and try out how I can make my vision technically possible, I’ve decided to create a teaser video for the upcoming film - a prequel titled “Before the Storm”. 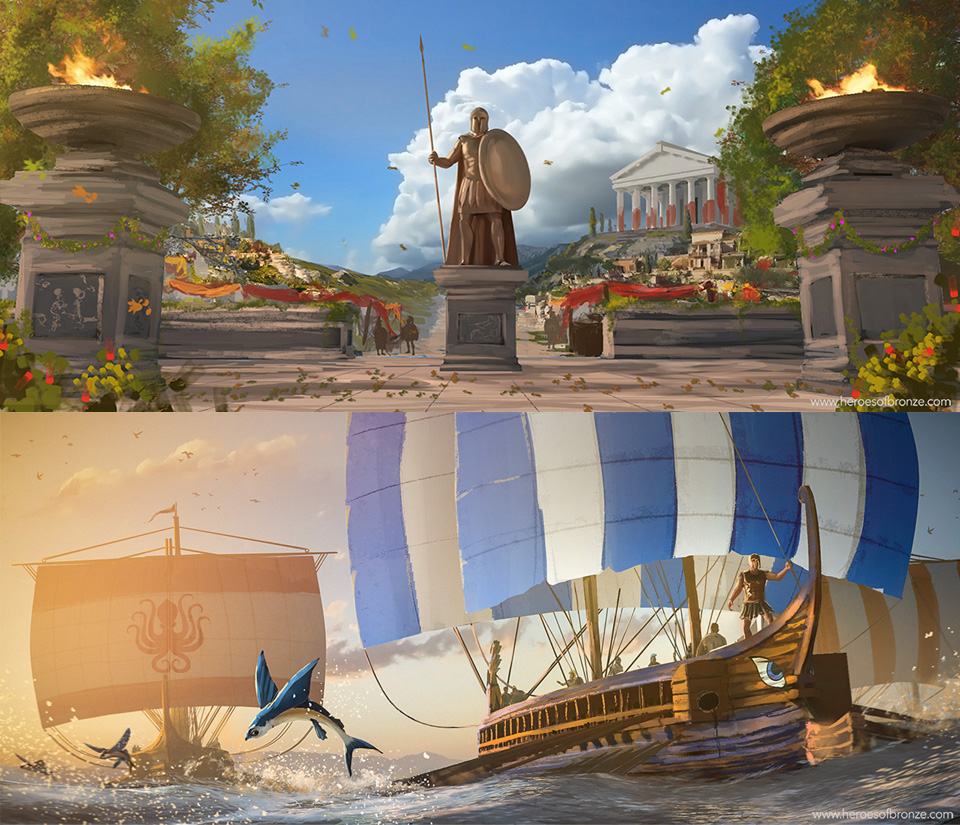 Some of the storyboard screens I made for Heroes of Bronze, using Blender models and painting over them in Photoshop. See my workflow here.

As opposed to the actual film, for which I wrote a script and drew storyboards, in the case of the teaser, I chose a simpler approach. I just thought about some cool scenes to depict, each testing a different Blender technique which I was not too sure about. So in one, I tested my trireme (ancient ship) asset and its sails flapping in the wind. In another I put together an army marching to fight at the battle of Marathon. In others I tried out the Megascans assets to create a rocky foreground.

Each shot I picked to push my CG abilities but I also wanted to form a little story. I intended to build a “calm before battle” atmosphere, showing a city (Athens) waking up to a new day and preparing for a major battle, without actually showing too much. Also, among all the soldiers marching and ships preparing to sail, with the last shot I wanted to tease the story of a father and a son, which is going to be pivotal for the actual short film.

Back to technicalities - to create this film, I knew I needed a way to create many character models fast. I kept searching for a tool that would allow me to generate some automatically - and found a great solution in combining Adobe Fuse, Mixamo and Blender. As part of my Adobe subscription, I downloaded the Fuse Beta version that allows me to quickly create human meshes and edit their appearance however I like (just like in The Sims for example). You can then send your model to Mixamo, where it gets automatically rigged and you can choose from a variety of animations. Finally, you just download your .obj, .fbx or collada format model and start working with it in B3D, editing the animations and poses. This way, I create all my human base meshes for the film. I actually have a tutorial for this workflow right here:

Apart from Blender, where I modeled most of my assets and put together the scenes, I also used Substance Painter. In B3D 2.8 you can now quickly select multiple models, edit all their UVs together and then just add a material to this selection and export it into .obj. Then you can use this .obj in your SP project and texture the models with variety of Smart Materials available there. Allegorithmic’s software is definitely a huge timesaver! You can learn more about this Blender-Substance Painter workflow in my Architectural Asset tutorial series…

I also decided to choose the new EEVEE renderer instead of Cycles, to speed up my workflow. And what a speed-up it was! This decision allowed me to eliminate long hours of rendering and hiring expensive render farms. I produced my final image sequences in a manner of minutes. There was no problem with transferring my assets from Cycles to EEVEE - it was mostly a question of switching the renderers in the Blender menu and then waiting for everything to bake. That simple.

What I found was that in order to make my scenes look good in realtime, I had to:

To make the editing of the scenes as smooth as possible, I couldn’t go too overboard with the number of models, so I deleted everything that’s not in the shot. The amount of textures is important as well; too many materials and image textures slow the process. One thing I realized when it comes to lighting in EEVEE is that Sun lamps somehow don’t produce nice results for me, so I switched completely to Point and Spot lights to highlight objects and using HDRI images for the overall lighting.

Creating marching armies was one of the toughest challenges of the teaser’s creation.

I actually break down a lot of my scenes on my YouTube channel, so if you want to learn more info about how I made the “Before the Storm” teaser, you can watch the videos I uploaded there!

With all that I have learned making this teaser, I am now confident that I can make my short film a reality. If you want to learn more behind the scenes, I’ve started a Patreon account where I share my assets, techniques and more behind the scenes (like how I made the marching army shot above), as well as some polls and questions, where you can influence the project. Any sort of help is much appreciated!

So, dear readers, I hope you like this Heroes of Bronze project and I would love to hear your comments and thoughts!

The latest scene I made for the project, called “First Blood”.

If you want to follow my work, check out the links below. Stay creative, my friends! 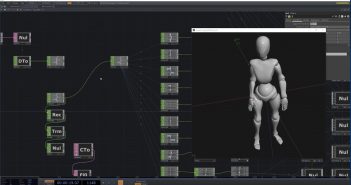 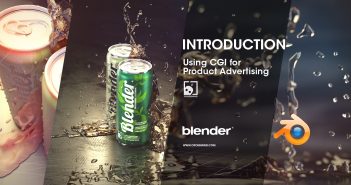