I'm George Tanev, I currently live and work in Sofia, Bulgaria. I've been in the gaming industry for a decade now – I started at Gameloft Sofia as a junior concept artist and grew through the ranks to a lead concept artist in charge of creating concept art specifically for combat units and hard surface assets for military themed games. I just love all things mechanical. I guess that's what happens when you grow up in you father's production workshop grinding, welding and milling stuff :D

During my time as a concept artist workflows changed. In the beginning concepts were done purely in 2D medium, later we started using 3D – initially as overpaint bases to establish proportions and perspective, and then we switched to 3D concept art altogether. For the past year, after I chose to leave GLBG, I’ve been doing regular 3D modelling work as a freelancer at home while watching my newborn grow :)

I've had previous experience with 3D prior to Gameloft though - my first love was Maya back in the early 2k's. It was a steep learning curve back then, but I guess learning the principles and workflows allowed me to make a fast transition to other 3D softwares, including Blender a couple of years ago.

With Blender it was an instant LOVE. I watched a couple of HardOps and BoxCutter demos by Jerry Perkins (aka masterxeon1001) and I was hooked, THIS was the software that I wanted to do my hard surface designs in, PERIOD!

Later I got the addons by Machin3 and some others, and have been expanding my knowledge of Blender ever since.

So this is how this AT Drone model got made. It was a workflow integration exercise more than anything. It initially started when a couple of weeks back I finally got the spare time to sit and learn the MeshMachine addon by Machin3. I just loved it. The fuse/chamfer tools are extremely cool, the boolean cleanup tool set too, the PLUGs are awesome, but what really got me grinning with an evil smile was the custom normals functionality. I just saw how it would offer the possibility of using boxCutter and HardOps on curved or even smooth SubD surfaces, without bothering that the cuts and booleans might introduce unwanted shading artifacts along the cuts. I mean – of course they naturally would, but after you've finished applying your bevel modifiers and so on – you could just do a normalTransfer from a clean Stash, and you’d get yourself a perfectly smooth surface akin to something produced in Fusion360 or some other high end nurbs based CAD. A potential of pure awesomeness that needed testing :D

I started the model with a couple of generic silhouette sketches. Unlike my usual work – I did not have a concrete idea of what it was I was going to create. Rather, this being more of a technical exercise, I marked the types of shapes I wanted – one was going to be more angular with large bevels (made using boxCutter and hardOps), the other would be some sort of a flowing complex SubD surface based on intersecting basic primitives.

For the angular shape I ended up cutting up a cube with boxCutter, and for the subD shape – I pretty much combined a bunch of cylinders and cubes using the standard allQuad subD workflow. 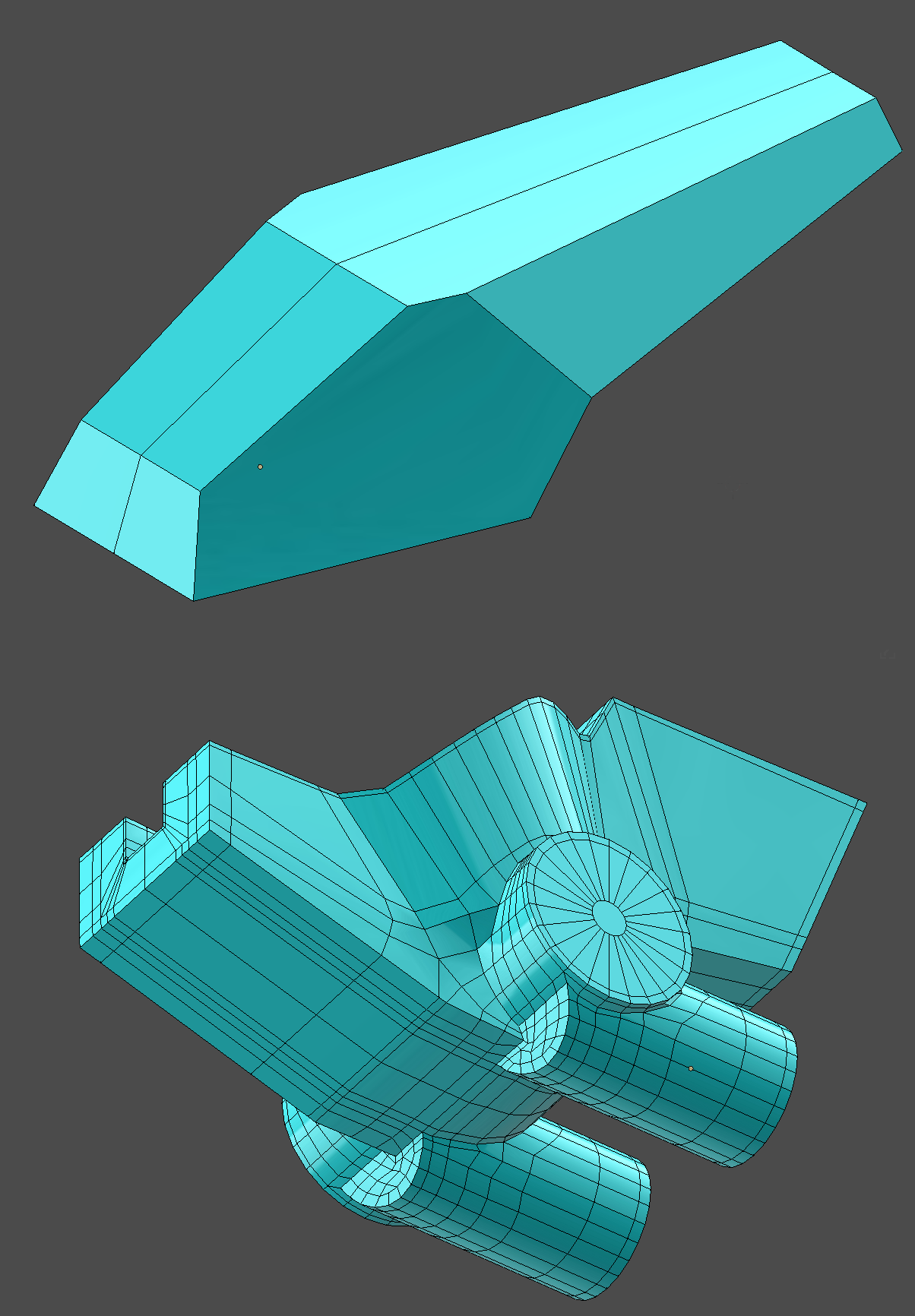 I added and tweaked some extra bevels and chamfers to the first shape and a thickness to the second with the meshMachine. 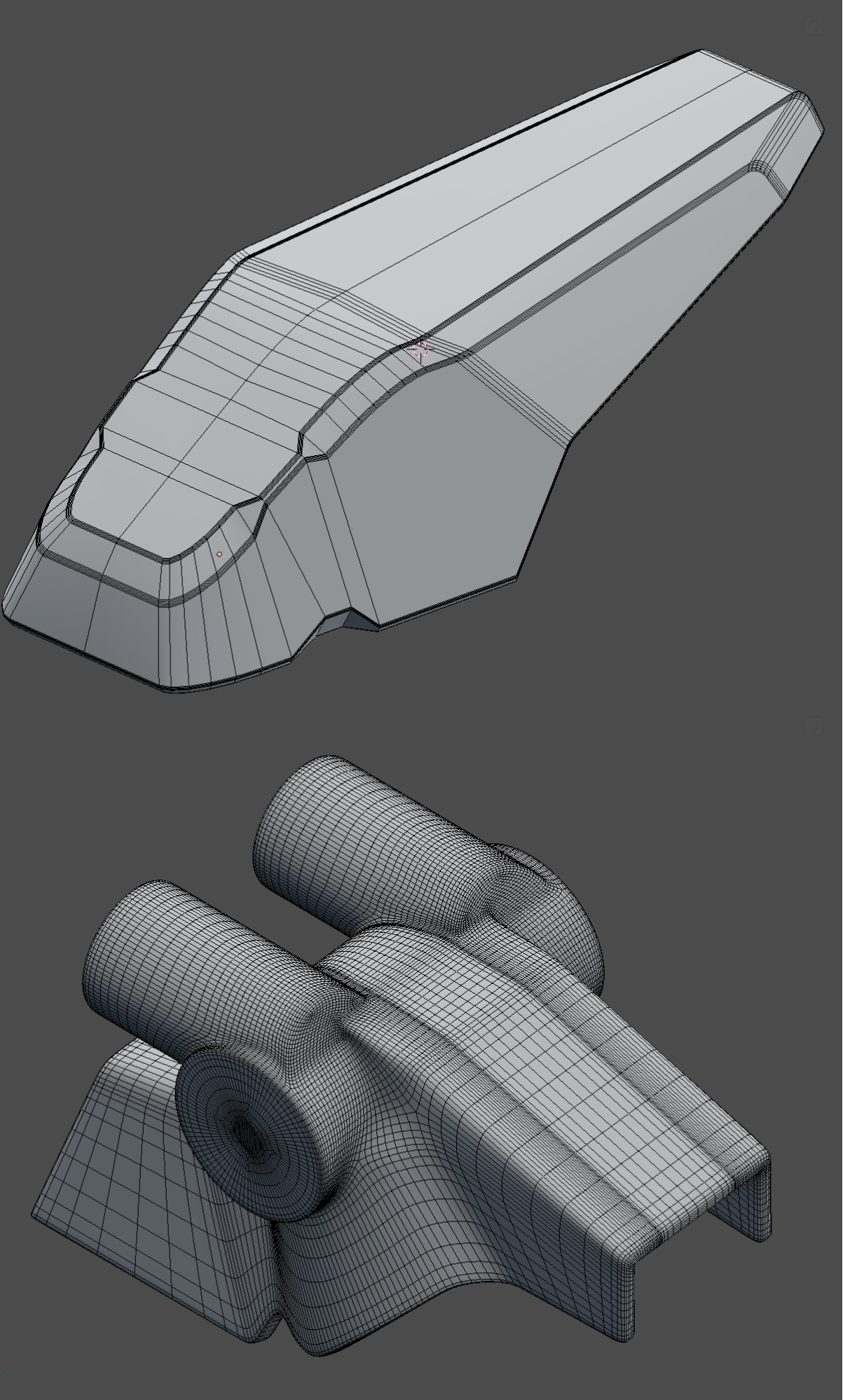 Around this time I tested out some leg shapes, and decided a helicopter prop and some visual mass under the chin might be a good idea. I threw it back to Photoshop, did some drawing atop the screenshot from Blender and decided the silhouette might also benefit from asymmetrical legs. The next morning I figured out this would make a fine anti-tank helicopter drone. It would attack in swarms depositing its chin mounted charges (the generic mass I just threw in to balance out the design) atop tanks and other heavy vehicles. Might even make for a cool animation in the future. :) 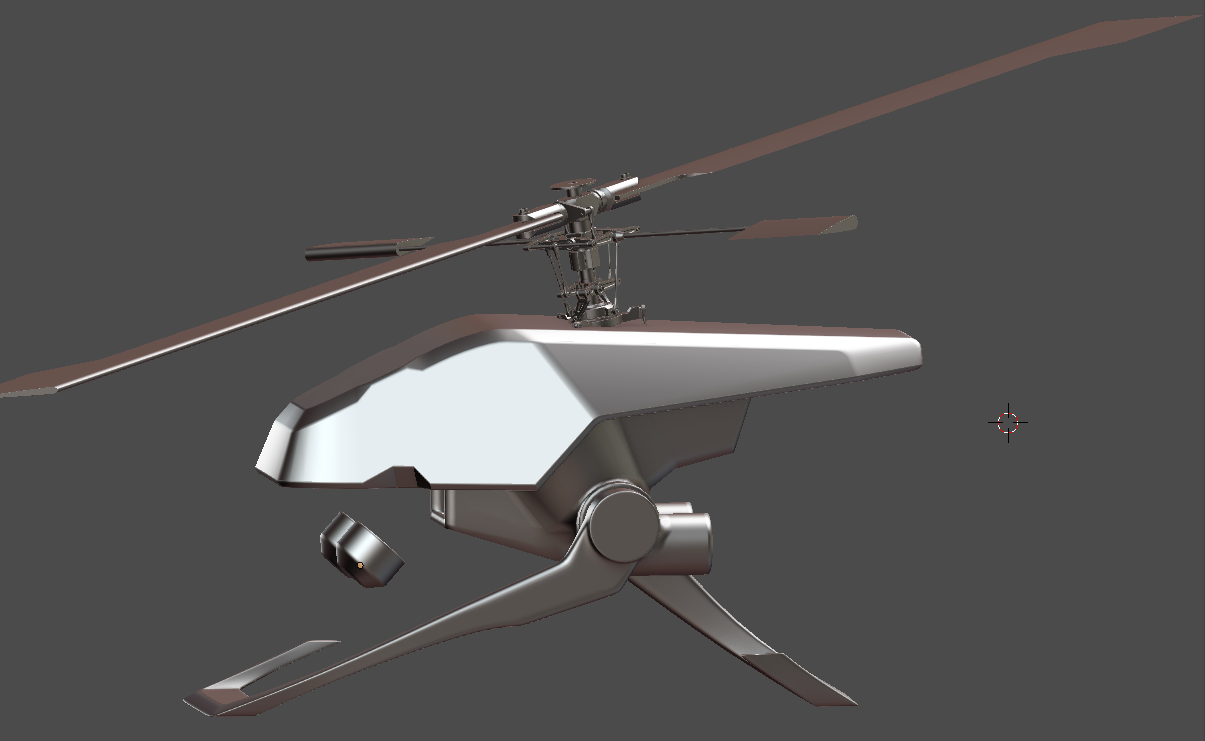 Once I was happy with the large shapes, I stashed them with MeshMachine and started cutting them up with BoxCutter. Once I was finished cutting, I transferred the normals from the stashes to the border faces and ended up with something like this: 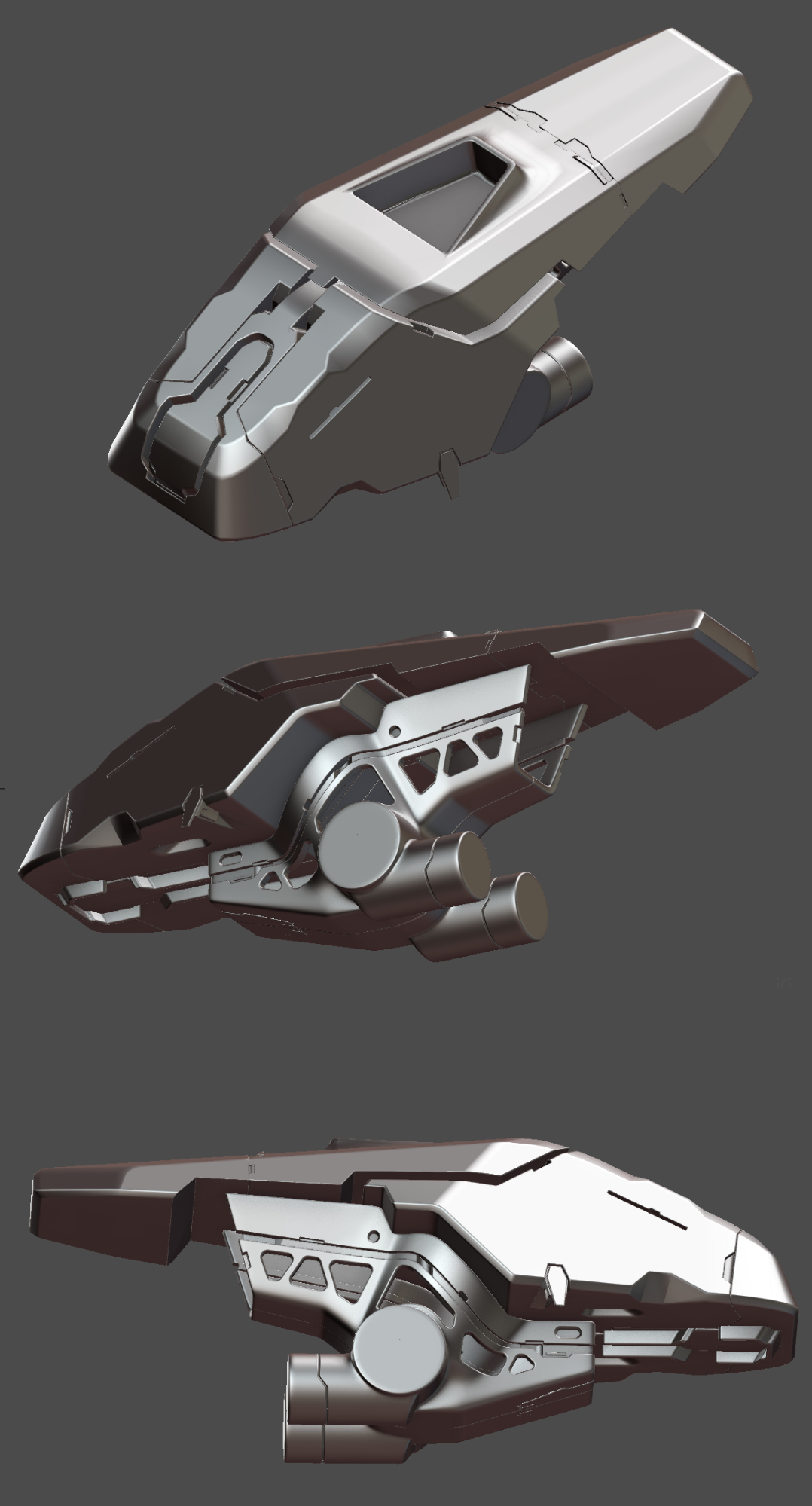 Next I pretty much did the same for the legs, plus I started adding PLUGs. This being a test piece I did not bother making my own plugs and kitbash assets; instead I used what came with the MeshMachine libraries, as well as some kitbash assets by Aidy Burrows and Gleb Alexandrov. I also used BoxCutter and HardOps for the chassis of the chin mounted AT charges.

Here is the finished subD piece. You may see the reflections going cleanly all around the PLUGs and the boolean cuts: 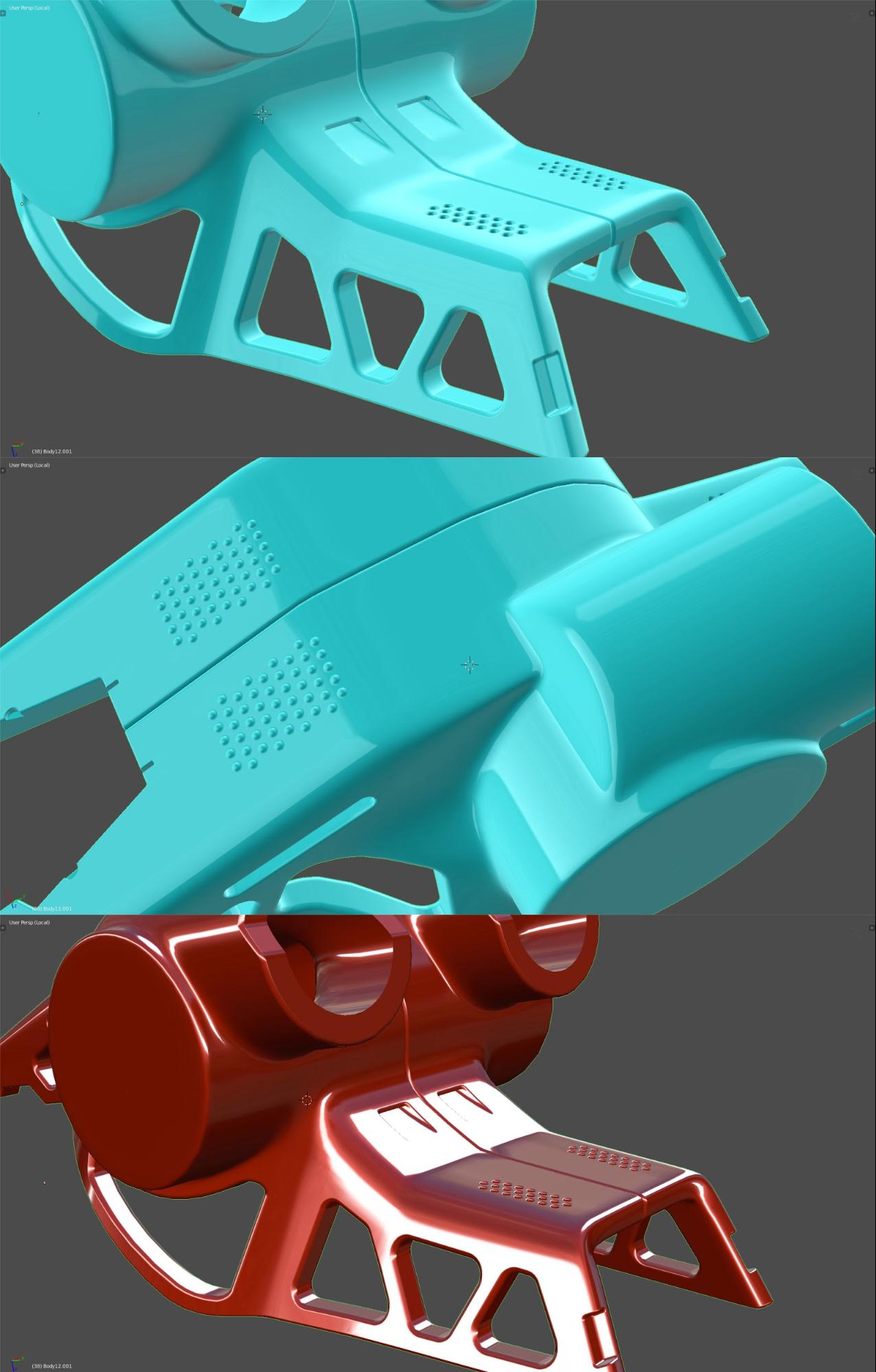 Here’s how the finished model came out: 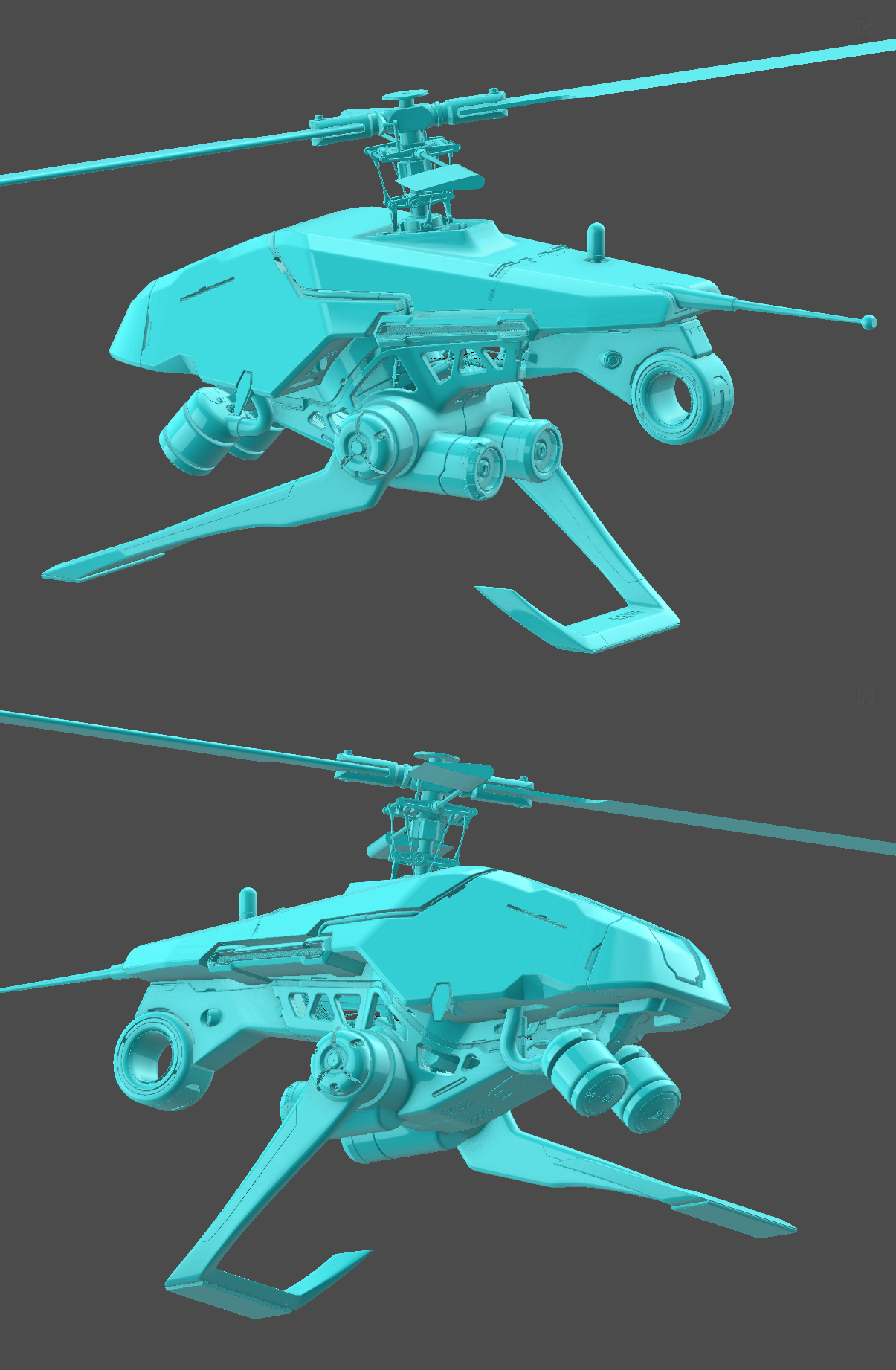 The shading for the armor was pretty simple. I just used a principled BSDF with a color texture that I painted externally. I love that Blender has this option of jumping externally to Photoshop, and then projecting the resulting overpaint back. It's a functionality very similar to that of Bodypaint in C4D, and back in the day when I was using it I just loved it. Being able to utilize all of my custom drawing brushes, doing halftone patterns and other effects is great, for certain tasks nothing beats Photoshop.

Otherwise, I applied decals from DecalMachine to add some text and info designations to the design. 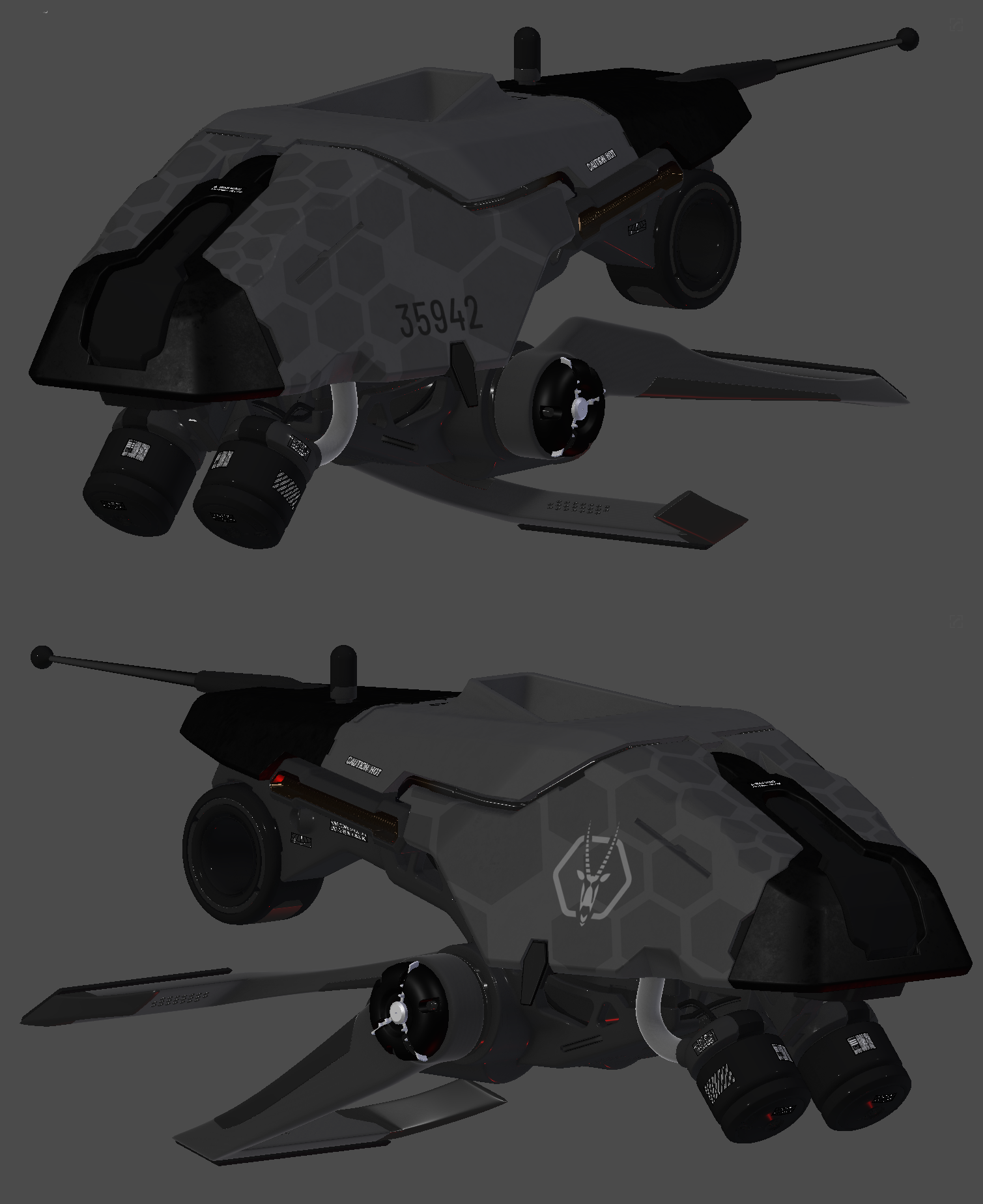 The heat-blued effect on the exhaust was pretty simple. At this point I was getting lazy, and I would not bother with UVs and such, so I just used the object coordinate to position a gradient texture over the end of the tube. 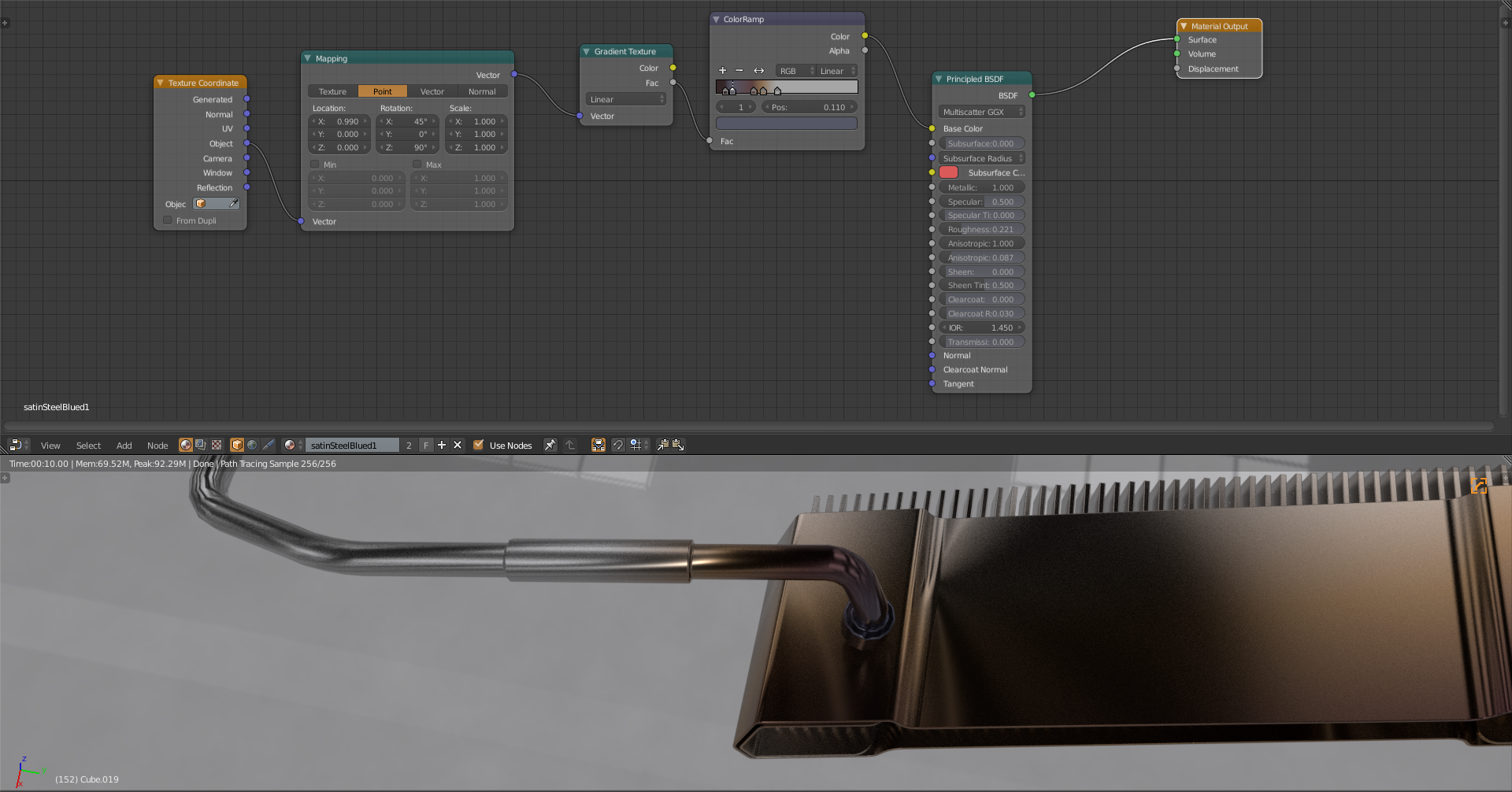 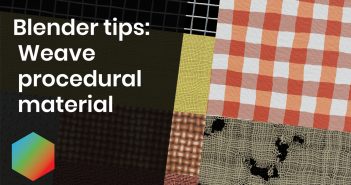 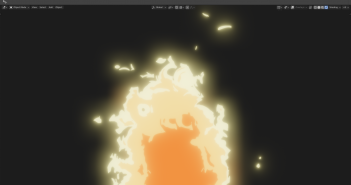 Next Article Procedural Fire In 2.8