“Our clients wanted memorable mascots to educate the public about storm water issues for seasons to come,” said Producer Kathy Buxton. “Since the re-usability of the characters was important, we felt 3D would be a better fit. Aesthetic-wise, we wanted something whimsical and cartoony.” This first PSA introduces us to Sergeant Red, an abrasive turtle drill sergeant, his sidekick Mingo, an affable fish, and Civilian, a well-intentioned but misinformed contractor.

Grasshorse’s Director Stephen Jennings built upon techniques he developed for Powerpuff Girls, where he meshed 3D backgrounds into 2D animation making the two aesthetics as seamless as possible.

“We had three-dimensional characters that we wanted to incorporate into stylized, hand-painted backgrounds,” Stephen said. “By using orthographic cameras in Blender, we eliminated traditional perspective, making the characters appear flatter. This integrated them beautifully with our 2D backgrounds.”

“Blender’s been part of our pipeline for years,” said Stephen. “Up to this point, we’d done most of our character animation in Autodesk Maya. Through our studio’s animation internships, we’ve been teaching students in Blender. We wanted them to go home and be able to work in the program they learned that day in the studio. I hate teaching someone a skill they can’t afford to continue developing after graduation.”

It became clear to Grasshorse that Blender is easier to learn, allowing artists to achieve better results faster. As the quality of Grasshorse interns’ work improved and they transitioned into becoming artists at our studio, we listened to them when they said they would really rather work in Blender.

“We’ve always supported open source technologies and it was exciting to take the next step -- character animation in Blender,” said Stephen. “We rendered the project in a mix of Cycles and Blender’s internal renderer. In Cycles, we created shading networks that reduced the effect of lighting on our models to build up a base level of exposure. As a result, the lights only generated a highlight. The was helpful in keeping characters from looking too ‘3D.’ We also used the Freestyle renderer to generate the line art for Mingo’s fishbowl.” Grasshorse determined early on that the characters would not be shown from every angle. These 3D characters are very stylized and have the same strong silhouettes used in early limited cell animation characters, like Pink Panther’s Inspector Clouseau and Mr. Magoo.

“We were also inspired by conceptual paintings created for 3D animated features that were later created in 3D,” said Kathy. “Why not skip the step of modeling and texturing the backgrounds when we could use the conceptual paintings? They are hand-painted in gouache on canvas delivering a tangible aesthetic with remarkable texture.”

“This was an experiment for us to see how well the effect would translate,” said Stephen. “The City of Tulsa Stormwater Quality and the Grasshorse teams are delighted with the results.” 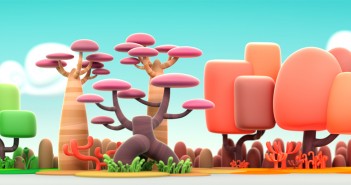 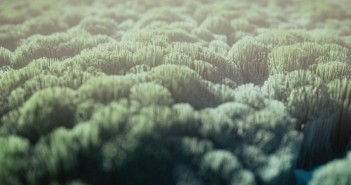