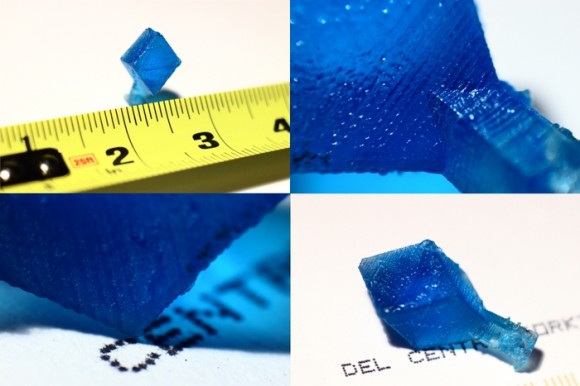 The Peachy Printer is a crowd funded project which aims to create a 3D printer and scanner for only $100 (add $350 for the 3D scanner capability). What makes it unique is that it uses audio to control the mirrors which control the laser beam that writes the cross-sections of the models. The entire project runs on Blender - by providing an add-on, users can convert 3D models into the right kind of audio file to drive the printer. Likewise, the 3D scanner is also fully controlled by Blender!

The project has become the quickest fully-funded projects ever. With 27 days to go the team has collected CAD $229,867 where they only required CAD $50,000 to finish the project.

From the project page on Kickstarter:

The peachy printer is a Photolithographic printer. That means it uses a controlled beam of light to cure light sensitive resin into hard objects. The peachy moves a laser beam along the X and Y axes to create the shape of the object, while using a drip system to control the level of the resin on the Z axis which determines the height of the object.

The object you want to print must first become a 3D model in Blender. The software we wrote as an add on to blender takes the data from that 3D model and translates it into an audio waveform. It then plays the audio file out to the printer through the headphone jack in your computer. This waveform drives a pair of electro magnetic mirrors. The higher the volume, the higher the voltage, the more the mirrors move. The purpose of these mirrors is to reflect and control the path of the laser beam. By using the audio waveform generated from the 3D model data to drive the mirrors, we are able to get the laser beam to draw out the shape of the object. That's takes care of the X and Y axes.

Check out the process here: