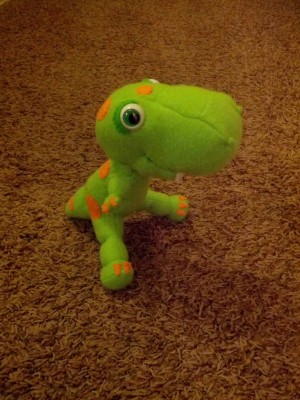 David Ward has turned his 'Poor Tex' model into a puppet!

I had created the T-Rex character from a dream I had about a year and a half ago or so (In the dream, the T-Rex kept walking up to me with a Twix candy bar in his hand saying "Let it be noted, don't get betwixt me and my Twix!") I sent the idea to Twix, but they of course turned it down, stating that they had their own marketing team and such.

But in any case, I took the idea and modeled out a fairly simple version of what the dino looked like in the dream, and thus, the "Poor T-Rex" character was born. I've made a few videos on youtube depicting his short-armed failures, and finally decided I'd like to have him in the real world. I looked all around for different software to convert a 3d model to a sewing pattern, but really couldn't find much. 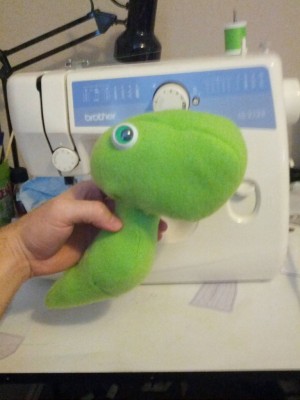 I had considered using Pepakura, but it adds so many detailed cuts and such, I figured it would get too complicated, so I decided to see how well a plain old UV map would work.

So I broke the model up into different pieces, and added the seams in the corresponding real-world locations, then unwrapped the UV coordinates. I printed them out and trimmed them down, pinned them to the fabric, and it seemed to work pretty well. As you can see from the pictures, it was merely a matter of a few sewing skills (learned from my mom when I was a youngster) and patience to get the little guy "born" into the real world.