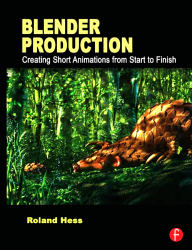 Having read Roland's other books and having been generally impressed with their quality, I looked forward to reading this one.

Roland tries to bridge the gap by taking you slowly and surely through all the steps needed to make your animated project creation as stress free as possible.

On receiving the book the first thing I noticed was that both the EBook and printed version of this book are very well produced, pictures are in color and the printed book is printed on very good quality paper. So you won't have any issues with looking at the pictures in the book or reading the text.

Know that this book assumes that you do know your way around Blender. It has practical sections on using certain features of Blender that will be needed for productions, but it is not aimed at people who are beginning Blender users, and Roland says so in the introductory part of the book. So it would be best to first get to grips with Blender's features before you try and attempt to implement the ideas described in this books text.

Assuming you are proficient enough with the use of Blender, you should be able to follow this books advice with no problems, everything is very clearly written and there a many clear and easy to interpret pictures.

In the very first chapters Roland has a brief overview of the different stages involved in animated production and introduces the meanings of various terminology, as well as going over why it is important to carry out the steps described in the order laid out in the text when producing an animated project.

After the introductory chapters, the later chapters go into finer detail on each individual step in the production pipeline, from how to create your story in script form, all the way to a final production render and end credits.

As an added bonus Roland even takes the time to describe some of Blender's simulation features and how they can be used in your animated projects. While simulations can cover entire books of their own, Roland give enough information on how to use them in efficient ways to make them more manageable in larger projects. So even if your have average computer systems you should be able to use simulations in limited ways.

Roland uses one of the projects he created as a reference throughout the entire book to go over all the important topics. This helps as he is able to point to practical results when explaining certain topics and features.

This book covers all the things required to make a small or medium sized animated project in Blender from start to finish, in very clear and easy to understand ways.

If you are interested in making your own Blender animated projects, then this book will be very useful and since it covers the newest version of Blender it is more up to date than other books which cover similar topics.

One to definitely add to your Blender book collection.