Virgilio Vasconcelos has recently compared the render speed of the current version of Blender (2.49) with the latest 2.5 build (svn revision 23930). The render optimizations are thanks to Jaguarandi and his Google summer of code 2009 project.Â  The results are very impressive!

After I saw the news that the rendering optimizations made by the user known as Jaguarandi were merged into the trunk branch of Blender 2.5, I decided to make a little experiment:

Using the file provided by the well known Blender Render Benchmark, I've compared the rendering speeds of the current 2.49b and 2.5 (svn revision 23930). Obviously the speed of two instances of Blender rendering the same scene while recording it in HD resolution isn't the most ideal environment. But still, blender 2.5 was able to render the scene twice before 2.49b could finish the first one.

In normal conditions (without resource hungry processes in parallel), the render time using version 2.49b was 01m03s, while 2.50 finished it in amazing 25s! :)

This new Blender is getting more exciting each day. I would like to thank and give my kudos to all the developers! 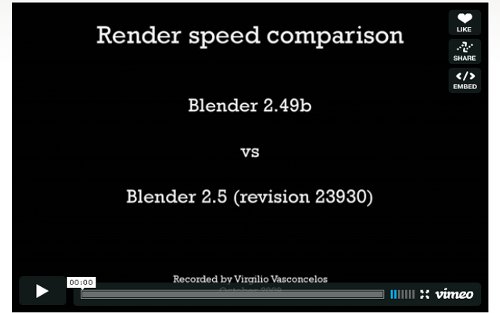