JeriH has released his George Rig 1.0. and he's obviously put a lot of thought into this rigging, keeping the animator in mind all the time with simplified controls and a separate window for the entire IK/FK controllers with a nice GUI background. In addition he's completed a companion manual for it.

I have finally released George Rig 1.0. 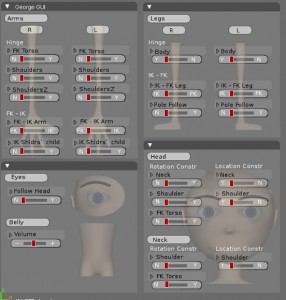 The license to the rig - CC Attribution (see text window of blend file as well as final chapter in the Guide).

Screen Shots of George in a scene (With hair)