Last week, the second Red Hat High technology camp ended. You may recall that we reported around this time last year about 3 members of the Blender community traveling to Raleigh, North Carolina to teach at the first ever Red Hat High technology camp. This year, we had 4 Blender instructors from the community, and based on the incredible work produced by students last year, we had a better idea of what to expect. We decided to put greater emphasis on animation this year and the students rose to the challenge, blowing all of us away. 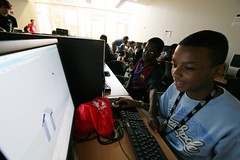 The Digital Animation track at this year's camp started with 15 students, dwarfing the numbers in the other tracks of Audio, Illustration, Digital Darkroom, and Programming. Fortunately, we had the right instructors for the job. Jonathan Williamson and I returned from last year's camp, and we added two award-winning Blender animators to the group: Bassam Kurdali (director of Elephants Dream) and Sam Brubaker (2006 Suzanne Award winner for Infinitum). The students used us to their full advantage, producing some absolutely stellar work. A roughly 4-minute assembly of their work is below: 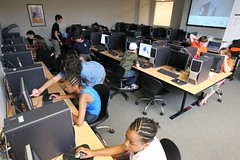 It's important to realize just how far this group of 13- to 15-year-old students came in the short span of just 5 days. Most of these students had never used any 3D software before and only one had ever heard of Blender prior to the camp. Over the entire week, they only had about 20 total hours to learn the basic concepts of 3D modeling and animation, familiarize themselves with Blender's interface, come up with an idea for a project, and execute it. By the end of the camp, these students were producing work that was well beyond the quality most people would expect. In fact, they were able to prove this on their field trip to the School of Communication Arts at Digital Circus in Raleigh. This year's camp Director, Greg DeKoenigsberg, wrote about it on Red Hat Magazine:

When the kids reached the 3D Animation classroom, they were very impressed by Maya â€” until one of them asked for a free copy. â€œA full license of Maya costs $7000,â€ the instructor said, which elicited an outraged reaction from the kids. â€œBut Blender is free!â€ they cried in unison.

Then the teacher started to show them some of the things Maya could do, and he was clearly surprised at the kids' clueful responses. â€œThese are vertices,â€ he'd say, and then they'd say â€œyeah, we've done that.â€ â€œOkay, this is texturing.â€ â€œYeah, we've done that too.â€ â€œOkay, this is FK and IK.â€ â€œYeah, forward and inverse kinematics. We've learned about that.â€

For me, that moment has been the highlight of Red Hat High so far: standing there behind these kids, watching the professor become more and more frustrated at his inability to stump them â€” when they'd been in class for three days.

Hearing this story made us teachers have the biggest, stupidest grins on our faces. I really wish I could have been there to see that.

The students knew this for a reason, though. They worked hard; challenging both themselves as well as us by asking tough questions and setting ambitious goals for their projects. A few students used some pre-rigged characters for their animations (including ManCandy and a coffee/flour sack created by Bassam). Others built their entire scenes from scratch or made use of advanced tools like arrays, dupliframes, particles, and even the fluid simulator. And the students in our track were not the only ones making great work. The Audio track students produced very strong music tracks and podcasts. The students in the Illustration track produced a short anthology of comic book pages. The Programming track students developed a Google Gadget to compute their grades. And the students of the Digital Darkroom track modified and improved dozens of the nearly 5000 photographs they took over the course of the week. Without a doubt, we walked away from camp this year thoroughly impressed... again.

Red Hat has planned on expanding this program from the beginning, so right now we instructors are working to finalize a curriculum that may be used and adapted by other teachers. Part of this will involve me giving a QuickTake presentation about Red Hat High at this year's SIGGRAPH conference in San Diego. Blender Nation will report on that as it develops. Hopefully in the years to come we will see more programs like Red Hat High sprouting up all over the globe. And where ever that happens, we can be sure that Blender will be a big part of it.