So, you want to make a movie.

It's probably every Blenderheads ultimate goal: Create your own animated masterpiece that let's everyone see the wonders of your creative imagination! Whether it's a comedy, drama, sci-fi, action, etc., you want to finally get around to creating something that allows you to bring all the knowledge and experience you've gained into one project.

But, where do you start? How do you get from point-A to point-B? And, most importantly, how do you finish the dang thing?! Oh sure, many have started projects but, how many actually finish them?

What you need is a highly-detailed guide. One that spares no detail and, is not based on any particular 3D software application. One that will illuminate things that seem so insignificant but, can ultimately make or break your entire project. Well, here it is: 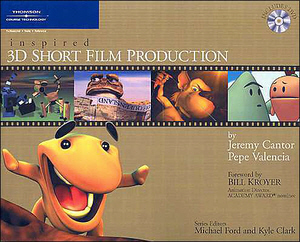 ...covers every aspect of the short-film production pipeline, demonstrating each concept and technique through a combination of general theories, examples, exercises, case studies, and interviews with short-film directors and industry specialists. Full of amazing imagery and one-of-a-kind content, Inspired 3D Short Film Production is a must-read book for current and future animated filmmakers.

Now, what you've just read there is not marketing hype. It is exactly what you get with this book. There are also tons of full-color screenshots, renders, illustrations, diagrams - everything you will need to bring clarity to the material covered.

Also, there's a DVD! The DVD contains dozens of award-winning short films, including:

[The book] is broken up into four areas, each one dealing with a different phase of a typical production cycle.

The book has two authors that have credentials that speak for themselves:

Now, let me take a second to mention What This Book Does Not Cover:

This book does not go into exact detail about how to do things like modeling, rigging, animating, etc. However, the information, coupled with the imagery, is enough for you to realize how you could go about doing it in Blender. Here's what they have to say...

Because the topic of each individual chapter in this book warrants an entire volume dedicated to its particular subject, [this book]will be wide rather than deep. The chapters will offer general overviews rather than comprehensive or software-specific discussions on each topic; therefore, we will assume that you possess a reasonable level of proficiency with a piece of CG software, such as Maya [, Blender,] or 3D Studio Max, and a non-linear editing package, such as Adobe Premier [, Blender,] or Final Cut Pro.

For complete details on what's covered in the book, visit this link

and check out the complete Table of Contents plus, a few sample pages!

Well, can you guess that I'm just a little bit excited about this book? When I purchased it, I knew it would be special but, I was still impressed with the coverage given to the subject. I've been made aware of soooo many things that, previously, would not have even registered as issues to deal with. Books like this are what the Blender Community needs to help usher in the "age" of Blender animation.

If you want to make a movie...this book is a must-have reference.

If you can't afford it, here's a little tip that might work for you: Go to your public library and see if they have it. If they don't, you can request that they purchase it! Most larger libraries will do this (just don't make it a habit) and they will even call you when the book arrives and you'll get to be the first one to read it! Now, this isn't the fastest way (weeks, maybe months) but, I've done this before for books as well as videos so, I know this is possible.

You can support BlenderNation by ordering through Amazon.com

. Our Amazon earnings will be spent on buying books for future reviews.

Before we do, here's a final question: what other books would you like to see reviewed?