Blender fits well into many different kinds of work, from film to urban planning. So who is the Blender artist that fits into the children's book industry that nets 4.4 billion USD (pdf) (3.4 billion EUR) annually in the US alone? His name is Nick Towers, an artist that creates visually stunning art aimed at children's book illustration using Blender.

After his â€œKaye's Kitchenâ€ appearance in the April Blender gallery, it was definitely time that I asked Nick more about himself, his work, and how Blender helps out.

How did you get into illustrating and children's book art?


I came to illustration relatively recently, although I do have a design background. I have a graphic design degree, and before that I did a year's foundation course at art college. I never studied illustration at college, but I was reasonably good at drawing. 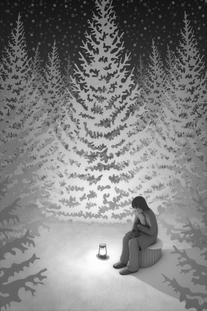 My inspiration to start exploring computer generated illustration came initially from videogames. The first time I saw Super Mario 64 I was completely amazed. Rare's Banjo-Kazooie and Diddy Kong Racing followed with improved graphics and some fantastic character and environment design. More importantly though, these games created the feeling of being immersed in a fantastical world such as I had not experienced since childhood.

About five years ago, I heard about Blender on a TV programme about games, and I immediately downloaded it thinking I would have a go at making some interactive content like walkthroughs. I set out to learn the basics, but I got into making more and more sophisticated still images, and because of my taste for cuteness in games, I went towards that kind of style in my artwork. After I had made my first few pictures with Blender I started writing story outlines to give myself a subject to illustrate.

In my day job I am a Teaching Assistant in a primary school (ages 4-11), as I see a lot of books and interactive content aimed at children. I've never seen 3D artwork used to illustrate story books, and when it is used in the interactive

stuff it is usually poor quality. Many children enjoy using computers and are used to seeing computer generated 3D images in games and films, but illustrators (or publishers), have not really got into it yet. There is the issue of the time it takes to produce good quality 3D images, and I am conscious of this myself, but I continue to develop faster ways of working, and I am convinced that it is a medium well-suited to fantasy and children's illustration. I feel quite a pioneer to be producing children's book illustrations with computer generated 3D images, and I hope publishers will see my choice of medium as an asset.

Recently, I have been spending time on my writing as well, and I have just finished the text for a picture book called Sugar, which I am approaching publishers with. My recent submission to the blender gallery, Kaye's Kitchen, is a sample illustration for this book.

Why did you choose Blender for your work?

Blender is the only 3D creation software I've ever used. Most 3D content creation software is prohibitively expensive and I am very grateful to the people at Not a Number, because if Blender wasn't free I would never have started to explore computer art. It seems to me that Blender is capable of producing anything I can imagine, and it keeps getting better with every release.

Which version do you use for production? Do you have a specific tools or features in Blender that you like/use the most or that makes your work easier?

I always use the most recent version of Blender, and I am always excited to try out the new features. Every new addition means I can add greater richness and warmth, which is what I am always striving for. I have wanted a good method of making hair and fur for ages and I finally got it in the 2.40 release. 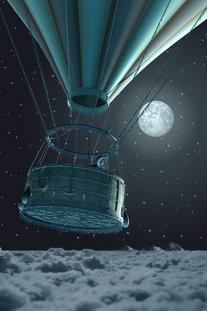 The other feature that has had an enormous affect on my pictures is ray tracing. I am a huge fan of ambient occlusion. I never had much success with radiosity, or with Yafray, but I was always trying to imitate that evenness of lighting. I used to spend ages setting up hemi lamps to get an ambient lighting effect. Ambient occlusion lets me get that effect really easily, and I use it as the main light source in every picture unless I'm using the toon shaders. Ray mirroring has enormously simplified reflections (I never use environment maps now), and I usually use ray shadows now rather than buffer shadows. The only down side to working with ray tracing is the increase in render time, but the results are well worth it.

Other effects I use are motion blur, and the sequence effects glow, and depth of field, a sequence plug-in. I also use a python script fibre generator plug-in to make grass, and that has saved me lots time.

Something I would like to see introduced into Blender is subsurface scattering to help make nicer looking skin. Which reminds me, I have used the ramp shader ever since it came out to add that fuzzy-peach effect to skin and clothes.

Do you use the Blender Internal Renderer for rendering?

I don't know if its because my computer is aging (I use an Athlon XP 1900+ with 768mb RAM and a GeForce FX 5700 Ultra) but I could never get Yafray to work reliably, so I always use the internal renderer. With the range of shaders, the option of using ambient lighting, and the choice between ray and buffer shadows, the internal renderer seems almost infinitely customizable. It is also reliable, and, if I am not using ray tracing, very fast. When I run out of new things to do with the internal renderer I might start using something else. Yafray images look great though, so I'll probably have another try with it when I get a faster computer.

You have some great tutorials on your site. Do you still use these techniques or has your experience caused you to find other methods?

I wrote the tutorials on my website in reply to questions about how I achieve various effects in my work. I still use the texturing techniques in my tutorials, depending on the style of the picture I'm making, but I've been having more success with UV texturing than I used to (the LSCM unwrap option and 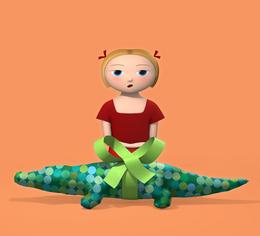 subsurf UV subdivision are to thank), so I am using a lot more UV-mapped textures now as well. The girl's face in Kaye's Kitchen is textured with a large UV-mapped image texture. Over this, I used a procedural texture, Musgrave, as a Nor and Spec map. I used a repeating image texture, like I describe in my tutorial, for the rest of her body. I used ramp shading to give the skin a softer look.

I have spent a long time working on ways to make nice-looking fur and hair, so I wrote a tutorial about it. I don't think I would make fur or hair with textures now that we have the ability to render hair strands. I used strand rendering on the model's hair in Kaye's Kitchen, and I will make good use of this feature again when I make her cat.

I hope you take the time to enjoy Nick's portfolio on his site as well as benefit from the tutorials. I'm sure you'll also notice that one of Nick's "Birthday Girl" images has graced the main Blender site as the art gallery button. I'm certainly waiting to see Nick's accomplishments with Blender get published!