Hello everyone! I am Stefano Cardia, a 3D artist who (luckily) travels a lot. I like to define myself as a nomad. My hometown is Bari, Italy, one of the towns lying on the east coast of the deep south of the peninsula. I often travel back there, since I always miss the sea, the food, my family, and also because I currently work with the University of Bari as a 3D data analyst for geological and archeological purposes. Of course, most of the tasks for a job like this can be done with a PC, so I can hang around and be physically there just once in a while when needed.

Indeed, Blender is one of my favorite software for developing digital content, for showing people what I do for work and fun. Not so much time ago I fell in love with this magic tool and still, it always has new things to discover, learn and experience, which keeps me glued to the updates and makes me love it like the first time I discovered it.

I am strongly oriented towards environmental concept design and I try every time to dive into something new, to learn new things, both because I am also a naturalist by training and because it enchants me to reproduce the settings I have in mind. It is a way of bringing out the visions that one has when looking at other artists and at the world itself.

As you can imagine, working in this field led me to develop the passion to go around, take photos, and do 3D photoscans with both my camera and drone. The main subjects are historical monuments and buildings such as the Arch of Trajan in Ancona. During one of my trips up and down Italy, I stopped in this beautiful city and took photos of the various monuments, among which this beautiful Arch stood out, miraculously well preserved and incredibly inserted in a port context that sparked in me the interest to reproduce it in the historical setting.

Something like this, rather than being just an artwork, can be later used in presentations, in academic/museal contexts, can be donated or sold to museums. By the way, I promised myself to upload (most of) all the photoscans I’m making for download on SketchFab or CGTrader, etc. just as a personal project. I think it can definitely be of use to someone.

The Arch today is a well-preserved monument and it is not immediately surrounded by too many architectural and natural elements, so it is easily accessible to being photographed from many angles. I did the photos with a drone (a Mavic Mini), in about one hour on a cloudy morning, then processed the photoscans with RealityCapture, which is definitely one of the best photogrammetry software around in terms of quality-price ratio, IMO. I then created the textures in GIMP.

At first, I wanted to recreate this space at the time of the construction of the arch, but honestly, I didn’t find so much about the original setting (obviously there are no paintings of the time), I could have just imagined and then started sketching. On the other hand, many paintings and engravings starting from the early Middle Ages are available online. That's why, in the end, I oriented myself on these (one in particular) trying to capture a snapshot of the time, starting from an artistic vision already put in black and white, and then mixing it with elements of fantasy or present today (such as the big pine in the garden next to the arch). 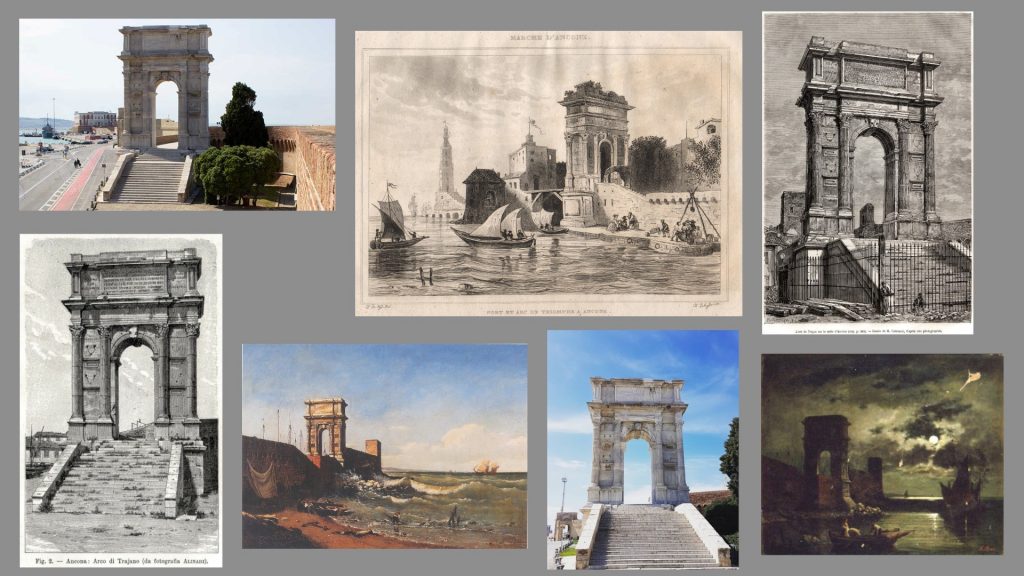 So I started from the foreground, modeling the dock with the pavement and the boundary wall, as well as placing some Megascans’ elements. I paid special attention to the shading stage as I like the realistic feel that mixing two or more textures gives, and then I played a bit with the colors to give an extra detailed natural look.

Specifically, I use Simon Fuchs' Blendshader, which is a really good compromise for these applications and I highly recommend it to anyone looking for a comfortable, precise, and, customizable version of blending shaders.

When I was satisfied with the colors, while customizing the textures with the help of Quixel Mixer, I started modeling the houses in the back of the arch. That was a tricky part, because I wanted them to be detailed, but manageable for the animation rendering.

Baking the textures on high poly models and then utilizing them on low poly can often be the solution, but as I always tend to retrace my steps and change something in the process, I like to have everything in the scene so I can change things at any time. Adaptive subdivision plays its part in these cases. 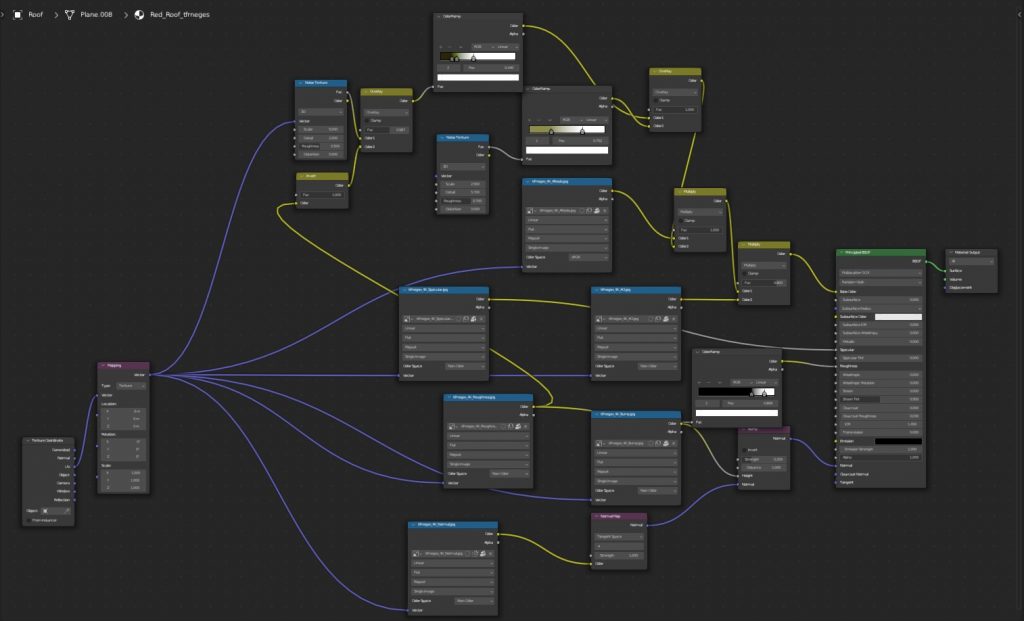 So I modeled the port house with the warehouse attached to it and the final dock with the lighthouse in two different stages. Then, I used some models I previously made for other projects as well as models and atlases (the windows) from Megascans to fill the gaps.

For the sea, I followed pretty much all that Dylan Neill teaches in his great and up-to-date tutorial, changing obviously the parameters of the modifier to have calm water flowing towards a dock and not an ocean. For this purpose, I customized the material a bit as well.

Then, I finally placed the little boat and the poles in the foreground.

In the background, I placed some alpha planes to fake the mist effect (volumetrics would be time-consuming for the animation, even for the still rendering I utilized a slight volumetric fog), then two planes with ships’ photos (alpha background) and the clouds, which are also planes from textures.com. Of course, I had to modify the shaders for each cloud card to fit the light. 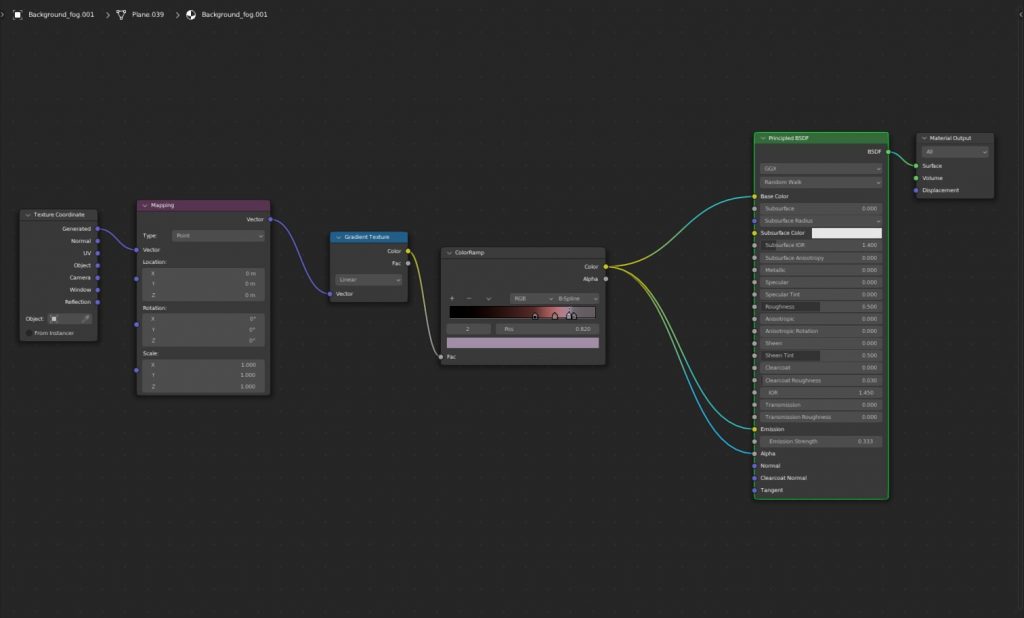 The world shader is a Nishita Sky with the sun lying west, so to give a dusk impression. I also added a final alpha plane in the very back with a slight emissive shader for this purpose and one with a noise texture attached to the alpha channel to mix it with the cloud cards. A moving plane to cast clouds on the scene was also a nice final touch.

Finally, I placed the trees and the hanging plants, scattered the weeds and grass with geometry nodes, and did some kitbashing with various props from Megascans that seemed to be suitable for a port environment. I also put a wet plane on the dock with a little bit of noise attached to the bump to simulate a natural effect. 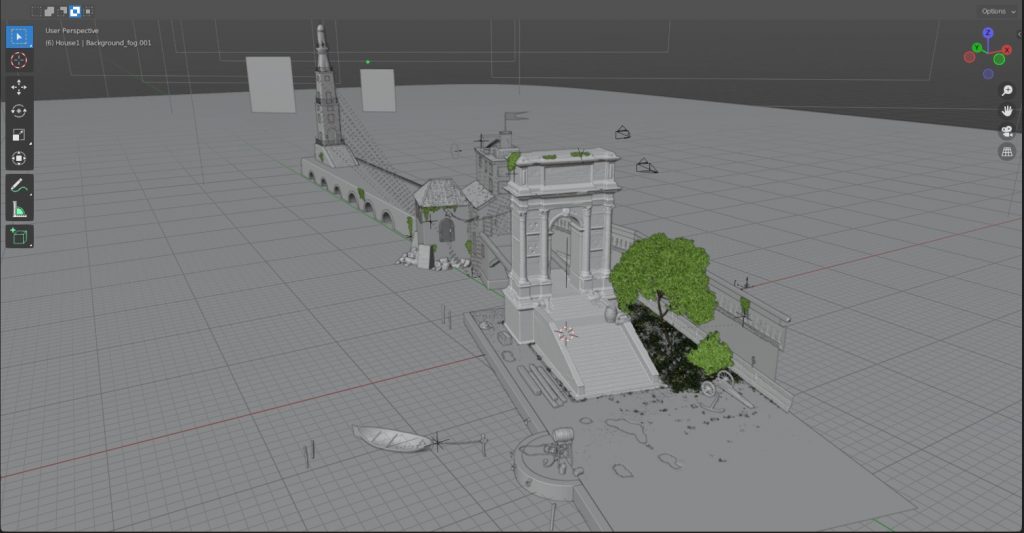 Then, I animated the movement of the little boat to give it a little pitch and roll, and attached animated ropes here and there, changing physics’ parameters to fit heavy port ropes. I added the flags and the smoke from the chimney, both with physical simulations, and the birds spawning from a sphere as particles.

Night light is always tricky, but I liked the idea and so, I added a skydome onto which I spawned the moon, some stars and some high clouds (low clouds are planes as mentioned above). I baked a fire simulation for the torches and put some point, area and spotlights here and there to adjust the overall lighting of the scene. 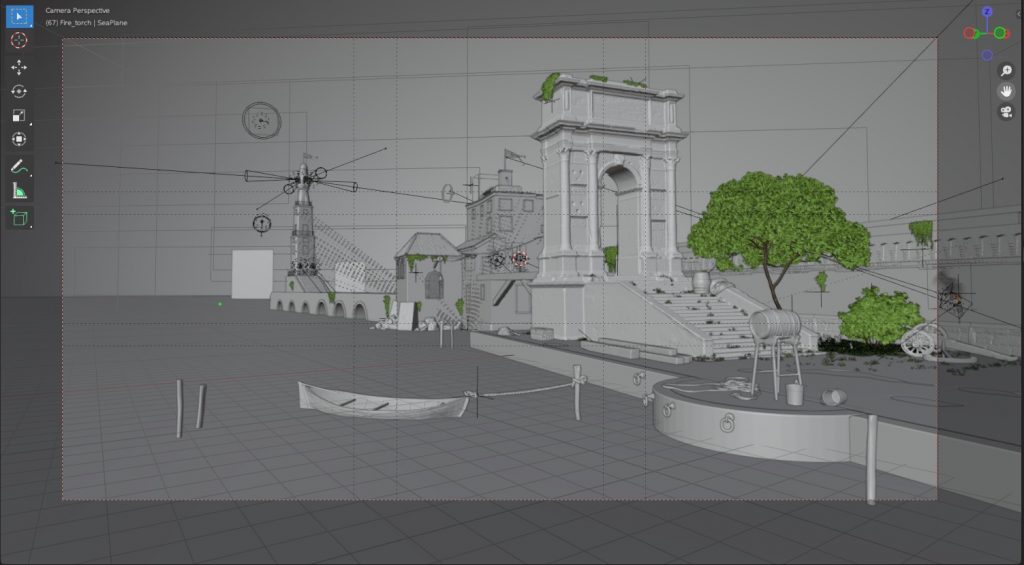 The torches of the lighthouse are just planes onto which I projected an image sequence of a fire animation, since they are far from the viewpoint and didn’t need much detail.

For the still renderings, I then decided to go super-wide as it gives more perspective and highlights the monumentality of the arch. Some final adjustments related to exposure and color in GIMP, and that was it!

A POSTCARD FROM THE PAST: THE PORT OF ANCONA (ITALY) 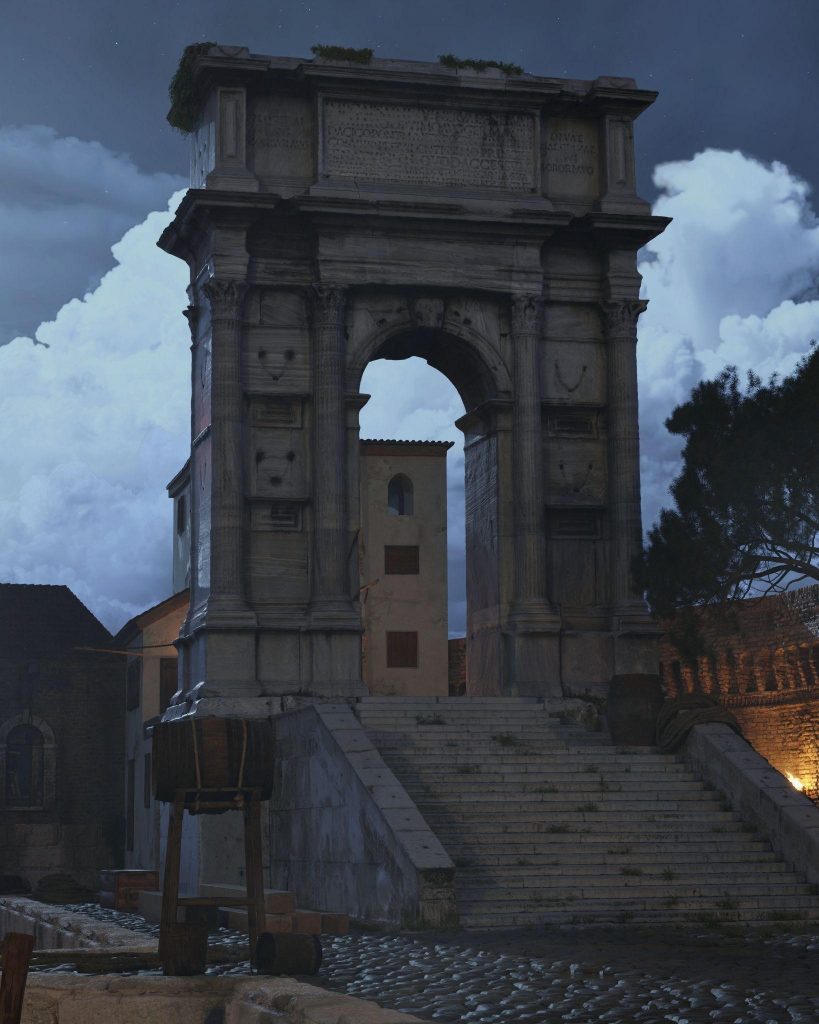 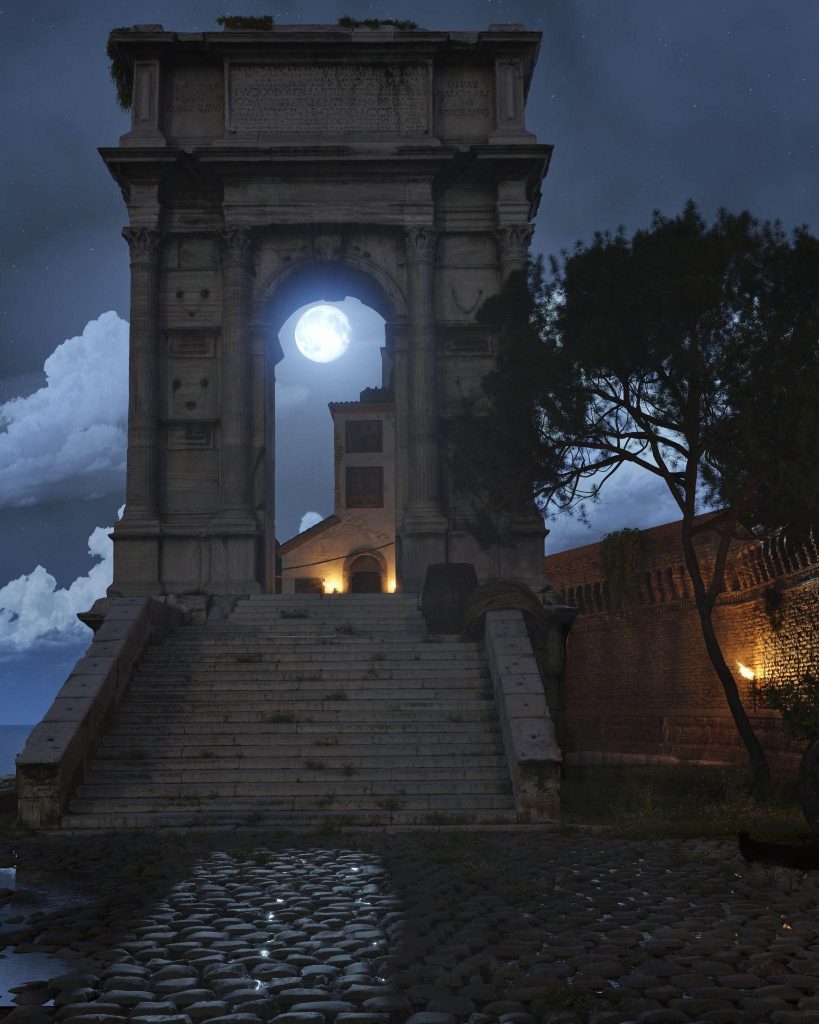 For a detailed overview of the whole process you can check out the time-lapse of the making:

Feel free to comment or ask any questions, subscribe if you want to see more of my work, or visit my Artstation or Blender Artists profiles. Thanks! 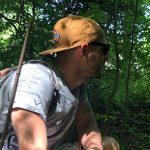 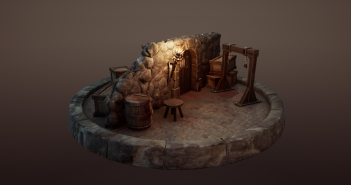 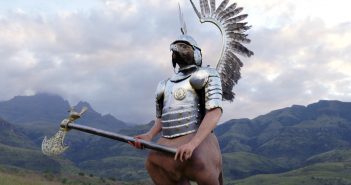 Next Article How to Make a 3d Fantasy Character in Blender. No skills required!