A few months ago, we took a look at “Vagon”, a service that provides “on-demand” cloud-based workstation access, which is aimed at creative professionals who want professional-grade computing access on the go.  At the time of our first review in June 2020, Vagon was still in its beta stage. Now that the service has matured into an official release, Vagon has sponsored this updated review to revisit the service and try out its most interesting features now that it has reached its final form. It's important to note that this sponsorship does not grant editorial control over the review. We will also be benchmarking Vagon's different performance offerings, notably its high-end "Galaxy" tier.

Creating and Customizing your Vagon Computer

When creating a new computer, you are greeted by Vagon’s new Computer Composer, which allows you to pre-install software on your upcoming cloud-based machine. Vagon allows you to install software once inside the computer instance, but this new feature is a welcome addition to ease the onboarding of new users, and having Blender as an option is always a plus. The pre-installation takes around 15 minutes and varies depending on the pre-installed software. The default disk storage available for your computer is 50 GB at 7.99 a month, with expansions to 100GB, 150GB, and 250GB costing respectively an additional 5, 10, 20 USD per month. 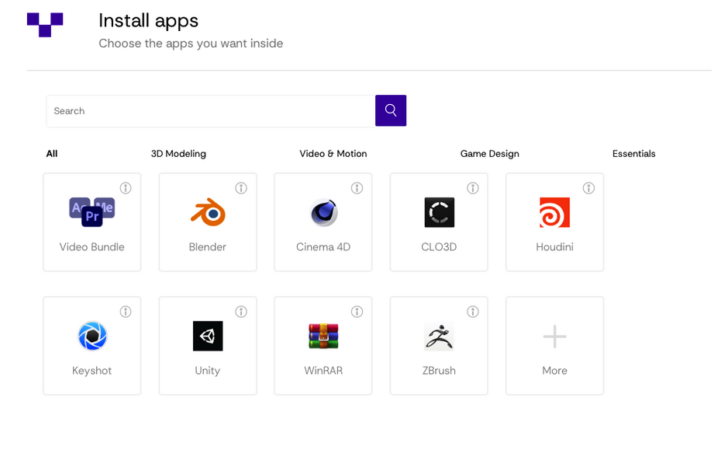 Since our previous review, the performance options have grown from three to seven, spread across Graphics Accelerated, Compute Accelerated, and General Purpose systems. Your Vagon computer is not directly tied to the performance options you choose and can be switched on the fly. For your Blender-based purposes, a Graphics Accelerated build seems to be the aptest. For the purposes of this review, I will start with a Planet system. The Planet is currently priced at 0.99$ per hour and is billed in minutes. 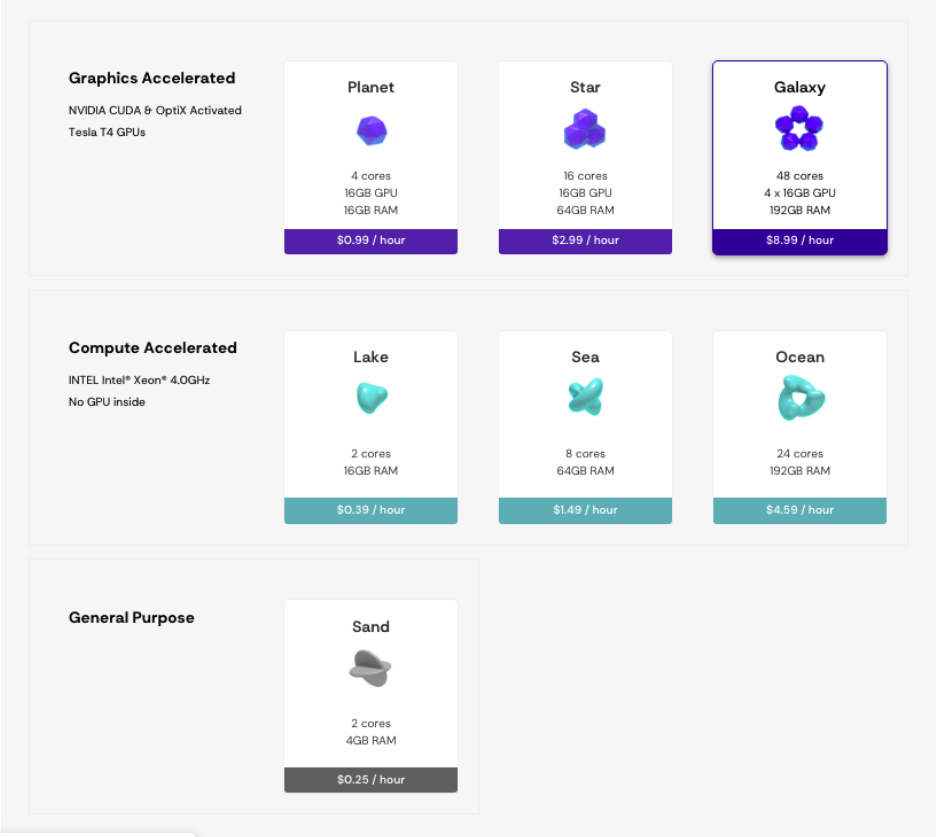 Transferring files to your Vagon computer is very straightforward and can be done via a simple drag and drop. A new “Vagon Files” features acts as a sort of extra cloud storage service that can be accessed either from your Vagon Computer or the Vagon Dashboard, where the user can transfer files even if the computer instance is not running. The usefulness of this feature is the ability to transfer and manage files without having to turn on/and being charged for a Vagon Computer instance. 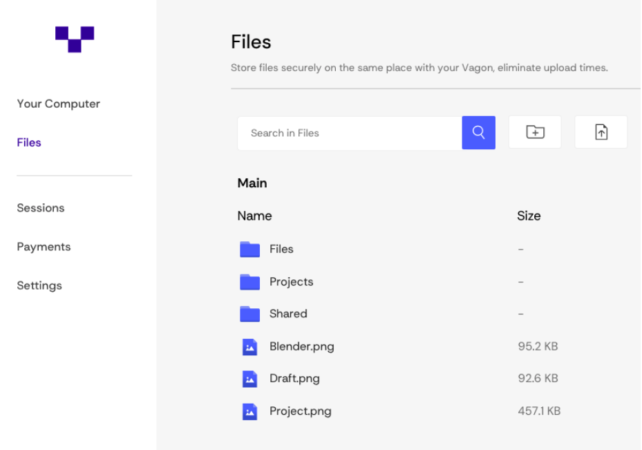 Vagon Files can be accessed from the Dashboard

Being a cloud-based service, it goes without saying that the user experience is heavily tied to connection speeds. Vagon now offers seven server locations to mitigate lag for users in different regions. 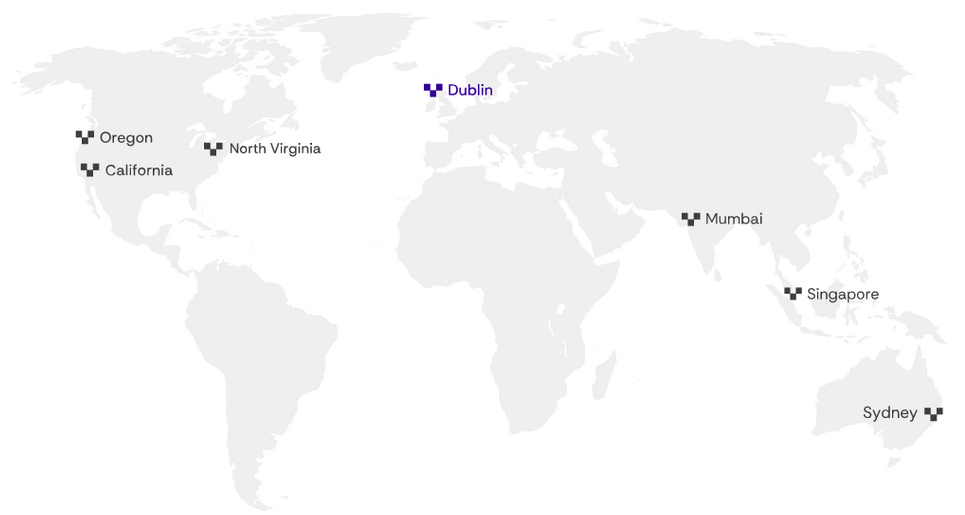 I’ll be using the “Lone Monk” scene by Carlo Bergonzini/Monorender to test the performance of our Vagon computer.

Our “Planet” computer handled the scene pretty well, with viewport performance being mostly acceptable, but with some slight choppiness at times. The performance remains fit to build your scene and work with Blender relatively seamlessly. The screen resolution, framerate, and other streaming options can be modified from the dashboard once in the Vagon Computer, to accommodate your internet connection.

When it comes to rendering the scene using Cycles, the “Planet” performance package holds its own, but won't be breaking any world speed records. This is where one of the strengths of Vagon comes into play: Dynamic switching of performance packages without having to build a whole other Vagon computer. To do so, exit your current session and shut down your Vagon Computer. You can then change your performance plan, and start it back up again. I tested the Lone Monk and BMW scenes on all Vagon performance tiers against a 1080 TI and a 2070 Super. Here are the results below: 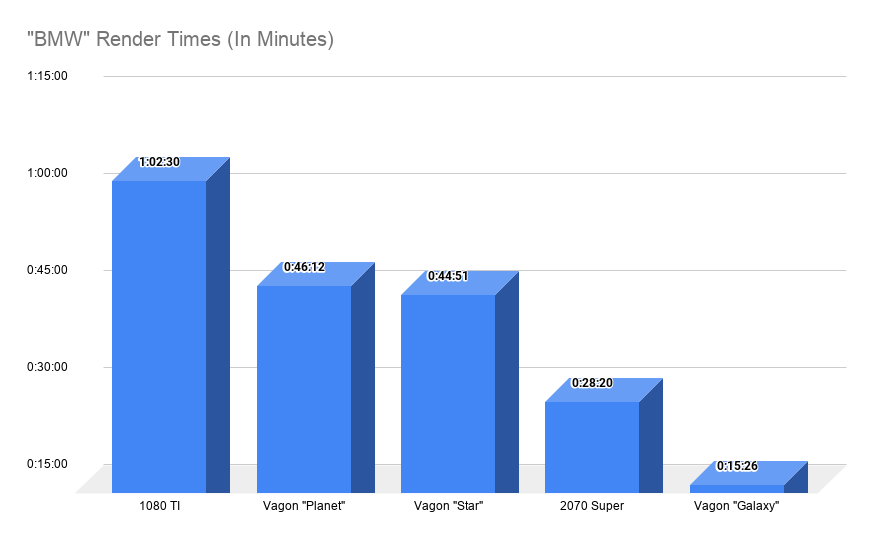 The "Galaxy", with its 4x16GB Tesla T4 GPUs, unsurprisingly comes out on top and can be used when some extra horsepower is needed on heavy projects. However, the cheapest "Planet" option is surprisingly robust and can be used most of the time if you don't need the extra RAM the "Star" package has.

Closing thought and What the Future Holds

While out of Beta, Vagon is already working on more premium features, such as gesture support for tablet and touchscreen use, as well as the ability to stream directly from your Vagon Computer. Vagon is also offering special support for Agencies and Teams opting to use their service, making scaling up on the system a more accessible option.

All in all, I was pleasantly surprised by the robustness of the service, and the usefulness of its different performance tiers when it comes to managing costs while still being able to scale performance when needed. While not a replacement for a render farm when it comes to rendering hundreds of very heavy frames, I can definitely see myself using this service on occasions where I am away from my pc and am in need of working on a scene and maybe even rendering a few sequences of it.

Try out Vagon for yourself

You can try out Vagon by going on the link below, and use the special Pomo Code "BLENDERNATION21" to get a 7 day free trial of Vagon including 2 hours of free "Planet" tier usage. 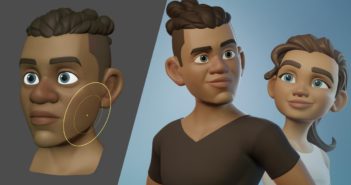 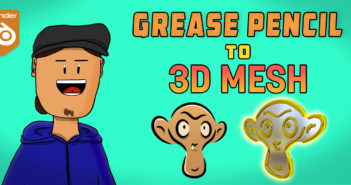 Next Article Grease Pencil to Mesh (2D drawing to 3D)