Having reviewed a fair number of 3D modeling courses that use Blender, I have seen many different things created, and in general I am more interested in the features of Blender that are demonstrated than that actual thing that is created.  However there is one particular thing that my inner 7 year old does like and that is dinosaurs;  When the particular dinosaur is the mighty T-Rex well then so much the better!So when I was contacted by CG Masters and asked if I would review their latest Complete Dinosaur Creation course I of course said yes, because well dinosaurs and Blender you can't really go wrong with that combination.

For those that have been Blenderheads for a while or have previously read some of my other reviews you will already know who CG Masters are, but for those that haven't CG Masters are the creators of many high quality tutorial courses which go through the process of creating various things with Blender from beginning to end.  Their tutorials cover the range of Blender user experience levels from beginner up to very advanced.

The Complete Dinosaur Creation course is instructed by Steve Lund a very knowledgeable Blenderhead who is also known as CG Geek on G+ ( https://plus.google.com/+BlenderSteVe/posts ).

After having downloaded the course content you have a number of ways of accessing it.  You can if you want use your web browser to access the course resources or access them directly from the resource directories.

Of the various resources made available in the download are:

It's worth noting that as I reviewed this course on a Linux machine I had no issue viewing or using the content, even though the Linux version of Blender is not supplied with the course, it is very easy to get from the official Blender Website.  I used the newest version of Blender and all the content of the course is still compatible with it.

Since I reviewed the downloadable version of the course it came as a collection of archive files with a download size of 13.5GB which means that unless you have a very fast internet connection it is going to take a while to download.  So if internet speed is an issue then you may either want to use a download manager to get the files or instead get the DVD version of the course.

The videos in the course are very clearly encoded and well narrated by Steve who is for the most part a very clear speaker and does a very good job of explaining what he is doing and why.  This is definately a good thing as the entire course is over 13 and a half hours in length.  If you are going to follow along while watching you will need a lot of free time.

The video introduction to the course goes over the topics that will be covered and shows what the end result will be.

After the intro Steve shows the viewer how to do basic blocking of the T-Rex form and the basics of how to setup Blender 3D Viewport background images to aide in creation of the T-Rex model.  The T-Rex is initially created using the poly by poly modeling method.

Having blocked out the T-Rex Steve covers using the Mirror modifier and Blender's Proportional Editing Tools.

I am not T-Rex expert but to me the modeling looked realistic, though if there are any palaeontologist out there you will have to make your own decisions.

With the basic T-Rex forms created Steve then refines each of the major parts of the T-Rex model adding progressively more and more detail at each stage.  Unlike the rough blocking stage Steve uses a combination of vertex and face pushing and pulling and extensive use of Blender's Sculpting and Proportional Editing tools to add the fine mesh details to the T-Rex mesh.

While this courses aim is to produce a dinosaur and not teach the finer points on the techniques of sculpting in Blender, Steve's use of Blender's Sculpting features is clear and easy to understand and he does take the time to explain the sculpting features that he uses throughout the course;  So if you haven't used Blender's Sculpting tools before you should not have any problems following along to what Steve is doing.  Sculpting and Multires were used thoughout and Steve makes sure to properly explain how to use the Multiresolution Modifier.  Blender's Dynatopo feature wasn't used, not sure why but it didn't seem to me that the workflow process Steve used suffered in any way because of this.

The one small issue I noticed and I am probably being a bit nit picky was that at one point Steve had an issue with Mirror Modifier splitting the mesh and leaving a hole in the mesh along it's center line.  He eventually managed to determine what the cause of this issue was and fixed it in later parts of the course;  It may have been better to pause recording at this point find the issue fix it and then tell the viewer what the issue was and how it was fixed rather than having issue present until later videos.

As the T-Rex got more complex Steve gave various tips on how to keep the performance of Blender high and allow you to model the T-Rex in a fluid responsive manner.  Blenderheads that have been using Blender for a while will likely know those tips but for newer Blender users it will be handy extra information to have.

The next major part of the course comes when covering the texturing of the T-Rex.  All the texturing is done using the Blender Cycles rendering engine rather than the Blender Internal rendering engine.  This means that you get all the power of Cycles renderer but you will need some patience when doing renders if you don't have a particularly powerful Graphics Card.  Topics such as how to carry out the basics of using Cycles Shading Nodes are covered in a clear way.

Normal Maps and Normal Baking and how it works as well as the processes involved in UV Unwrapping are all explained in a very clear way.

After the basics of Normal Map creation and applying those Normal Maps are gone over Steve moves onto using one of Blender's newer features, Image Stencil Texturing.  This feature allows easier more intuitive texturing on the surface of a mesh.  I am not certain but I think this is the first commercial course that I have seen that covers the use of this new feature.  Steve did a very good job of explaining what it is used for and its various features.

Steve uses the Image Stencil Texturing feature to very good effect, he textures the T-Rex mesh very efficiently and it really shows the power of the Stencil feature. 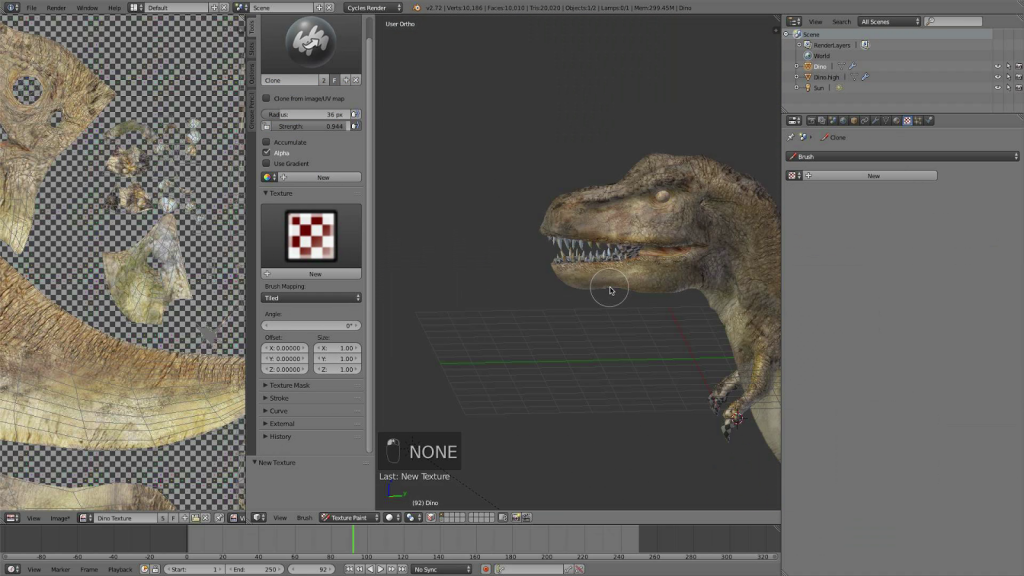 With Blender Cycles having Subsurface Scattering for a while it's good to see Steve use it to give even more realism to his T-Rex, has does a reasonably good job of explaing what the various SSS node settings do.

He shows a good technique to add scars to the T-Rex using Specular Mapping and Painting on the scars using Texture Painting.

One thing I really liked was Steve's explanation of how to make changes to a low poly mesh and then have those changes be transfered to the high poly sculpted mesh improving normal map quality.  I didn't know about this feature and it looked super useful.

Grunge texturing techniques are demonstrated using another Blender feature I haven't seen used before the Brush Mask feature.  This is yet another very useful feature.

The next stage of the course covers the techniques for adding a rig to the T-Rex so that it can be posed and animated.  Only the basics of rigging and applying the rig to the model are covered but they are enough to get a reasonable animation walk cycle created for the dinosaur.  The basics of creating and using Shape Keys is covered.  Again you won't end up being a Shape Key expert but the informtion that is covered is useful. 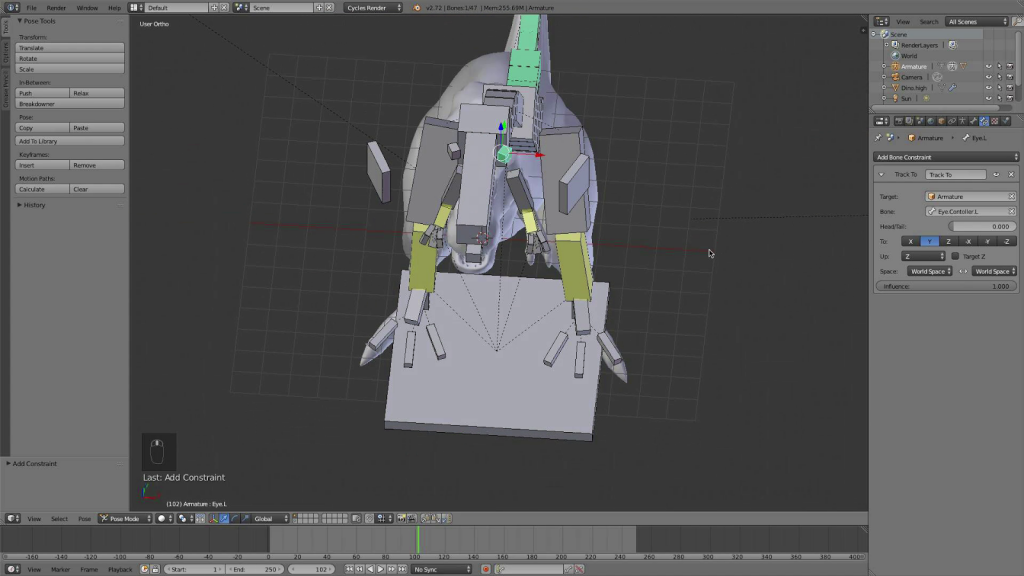 The T-Rex is integrated with video footage using Blender's Motion Tracking feature.  This was clearly explained and demonstrated, and if you have never used Blender Motion Tracker before you should be able to now do basic Motion Tracking in Blender.

Another of the things that caught my eye was when the dinosaur was being animated was the use of Dynamic Paint to make foot print deformations in the ground as the dinosaur places its feet on the ground.

Also integrated with the ground deformations was a simple method of adding a dust upwelling effect when the feet strike the ground using Blender Cycles Particles for dust effects and debris scattering.

With the dust, debris and scene integration covered Steve covers setting up HDRI environments and lighting the scene so it looks visually appealing. 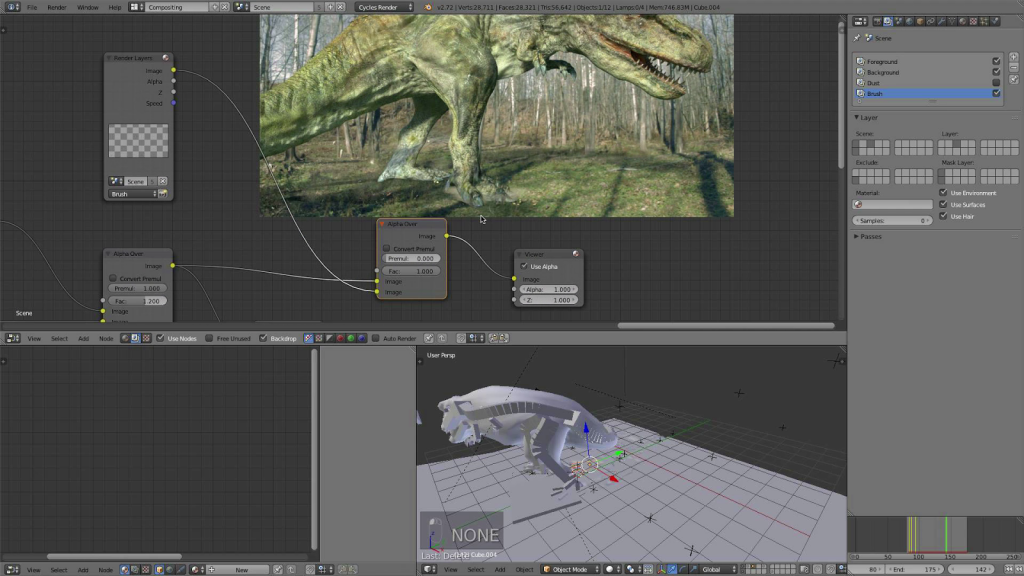 Finally the often tedious but useful issue of rotoscoping/masking is covered so that various unrelated elements in a scene can be composited together to look like they are in the scene together.  The masking was basic but showed the overall process well.

This was a great course, I enjoyed watching it, even though it took me quite a while to watch all of it.

If you want a course that shows you all the major steps in creating, modeling, texturing, animating and rendering a project with a T-Rex or any other sort of megafauna this is the course for you. 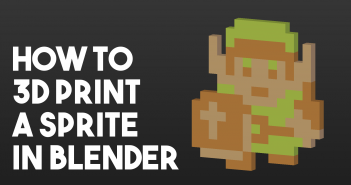 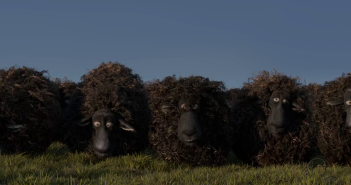