In the Behind the Scenes series, I'm inviting artists to talk about the creation of one of their works. Today, Rico Cilliers talks about Thunder God.

Hi all! My name is Rico Cilliers (aka "Guss" on BlenderArtists), I'm from sunny South Africa, and I've been a Blender user for almost seven years now.

I've always loved many different types of art, but I enjoy digital art in particular, so when a friend introduced me to to Blender back in the 2.4x days, I quickly fell in love with the software, and like most newbies I thought I'd be making Pixar-style animations in no time. I used to soak up any tutorial I could find, but it quickly became apparent that my learning journey would be a long one, and even now after 7 years I'm still finding tons of new things, and every time I see an awesome artwork or animation it just reminds me of how much I still have to learn.

November 2014 was a turning point for me, because I'd finally saved enough money to buy a decent computer, and I really wanted to make an artwork that would harness the full power of my new workstation. I decided I wanted to do something with the new volumetrics rendering options for Cycles in Blender 2.72, and I also wanted to do something depicting the awesome power of nature. I was inspired by the BlenderGuru "Nature's Fury" competition, as well as the realistic Clouds render by Andrew Price. I was tempted to watch his tutorial as well, but I resisted because I was afraid it might sidetrack me at that point. (Irrational, yeah I know) I did watch it afterwards though, and I highly recommend it to anyone who is interested in Cycles volumetrics.

I have a bad habit of trying to make my renders as realistic as possible, which is dangerous, because in my drive to achieve realism I usually lose that "story" element which is so crucial for many art-forms. This time I was determined to make a technically "acceptable" piece, as well as something that would speak to the viewer.

I started with a rough sketch, and I collected many reference pics from around the internet. After that I began sculpting the thunder God base-mesh. 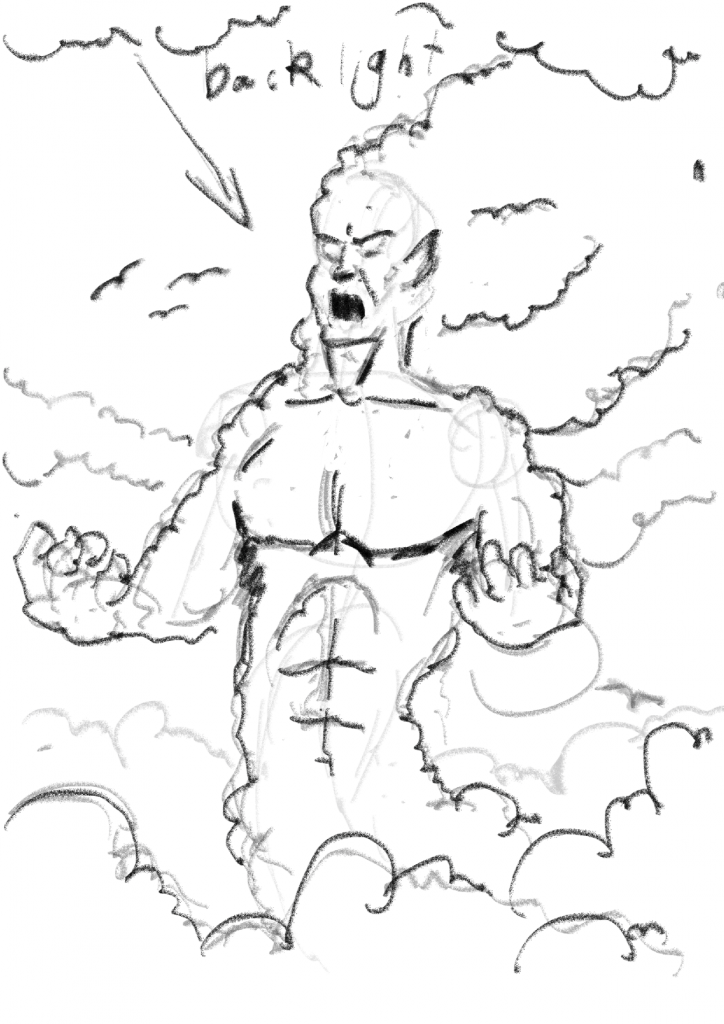 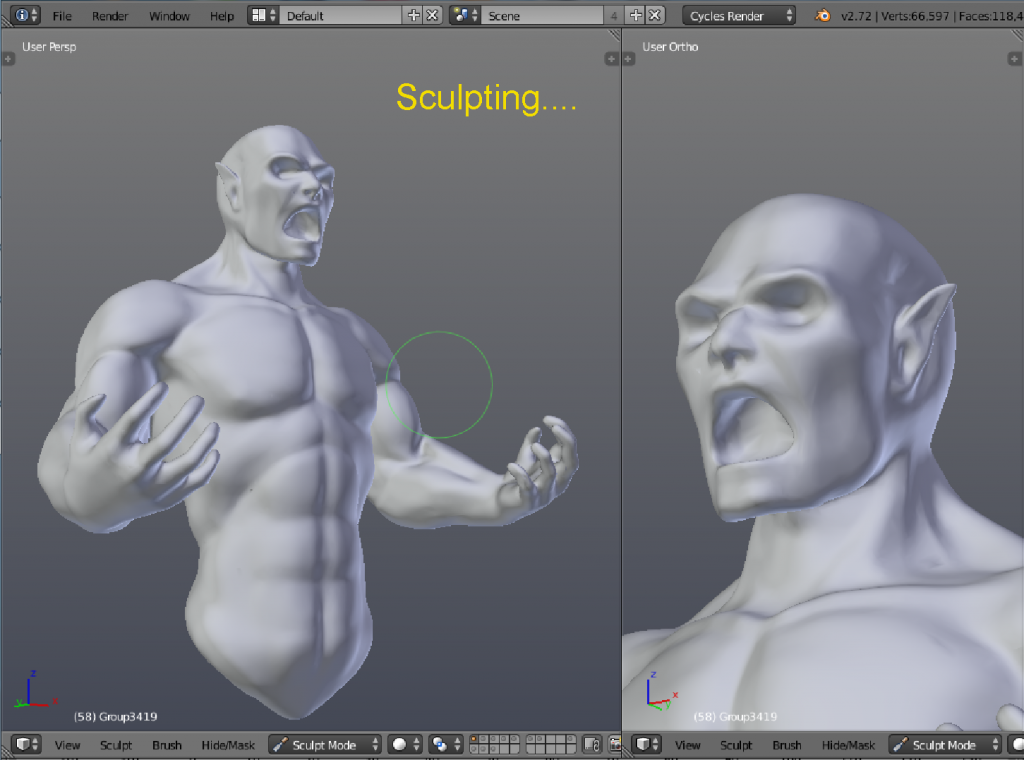 I also added a displacement modifier to the entire mesh, to try and simulate a "Fluffy" cloud effect. 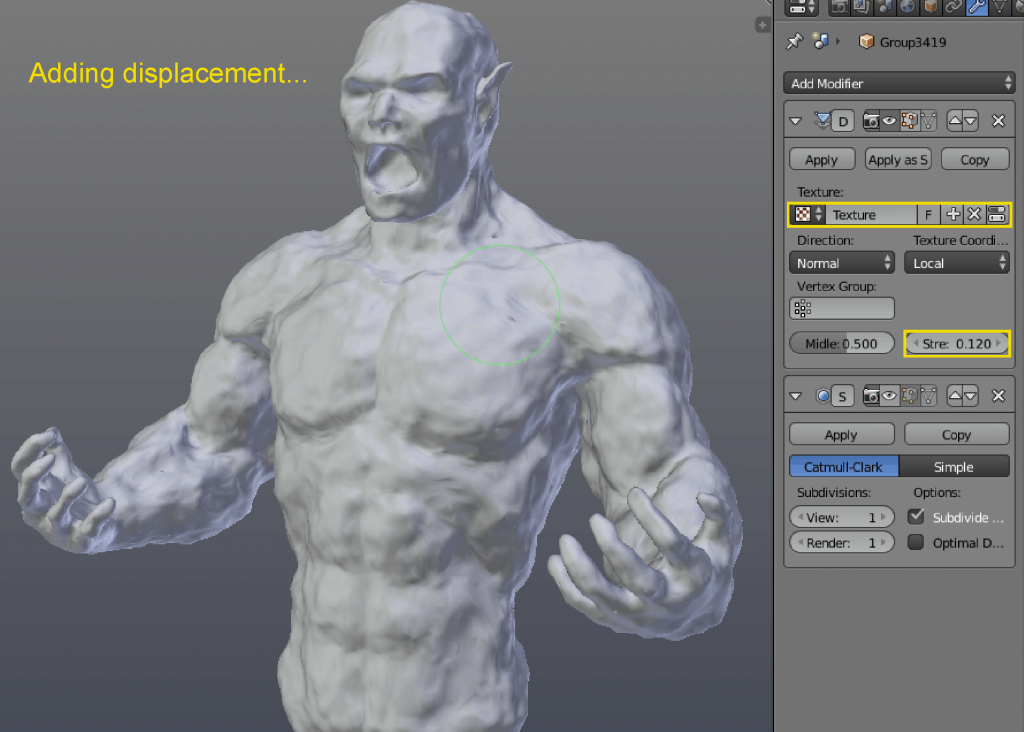 Next came the hard part: Volumetrics. Smoke. Magic. I knew from the start that I would use the smoke simulator, so I selected my thunder-god basemesh, and used the "quick smoke" preset in blender, to set up the basic smoke environment. 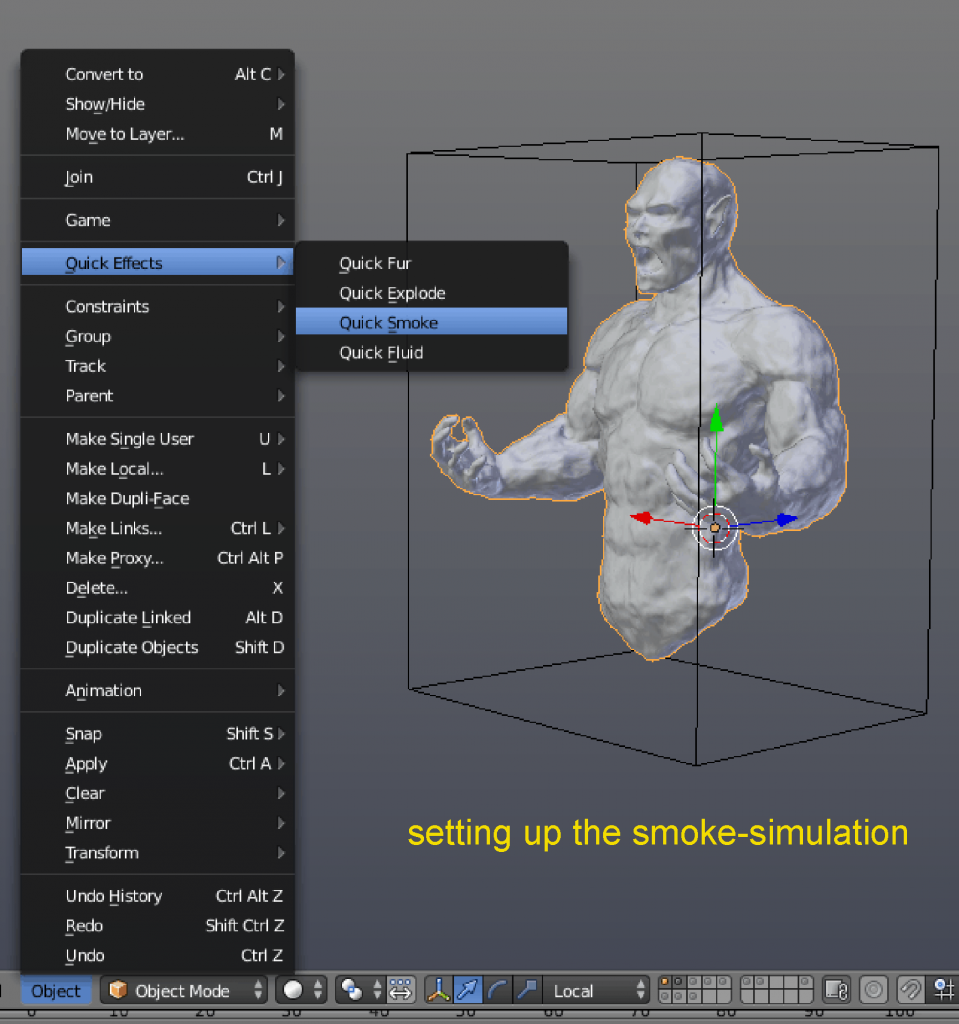 I also replaced the default volume shader which Blender so kindly generated. The default shader is meant to look like smoke, while I needed mine to look like clouds. I also adjusted the smoke-domain size....

Next I added some extra "smoke-flow" objects to the domain, to simulate the foreground and background clouds, and also did the lighting setup. These would receive many subtle tweaks throughout my workflow. 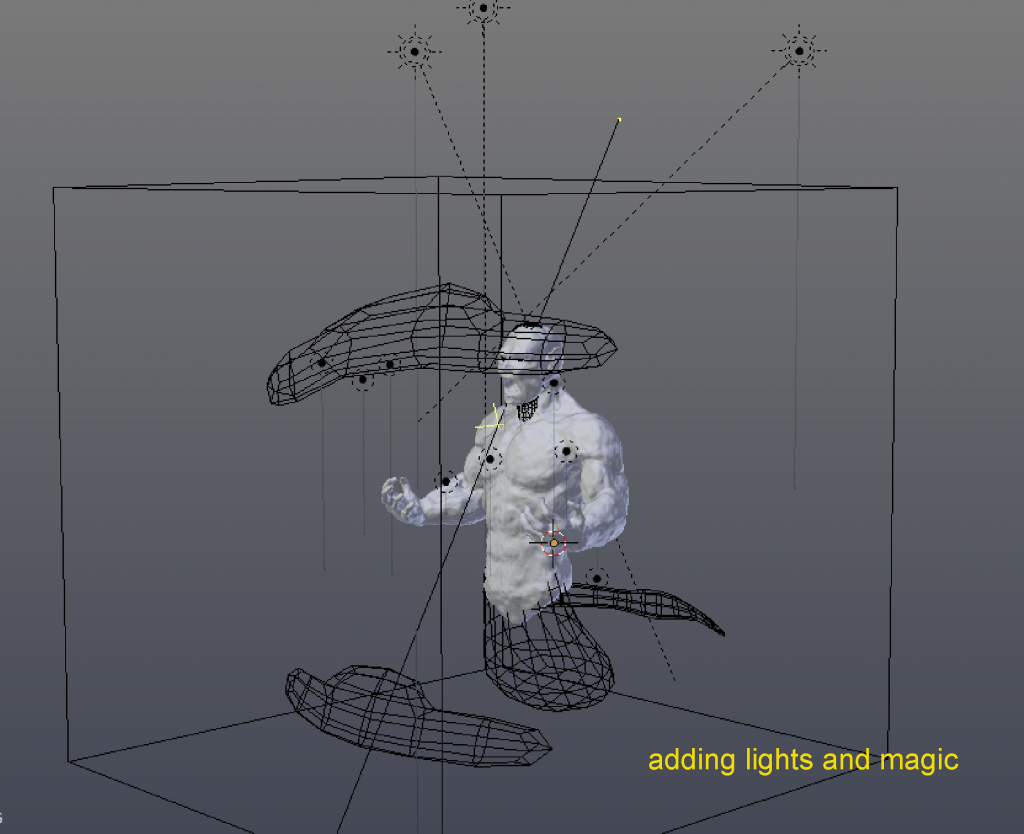 I also tweaked the smoke-domain settings, and made the smoke resolution higher (90 for test rendering, 150 for final render) I also started doing some 50-sample test renders, tweaking all the time. 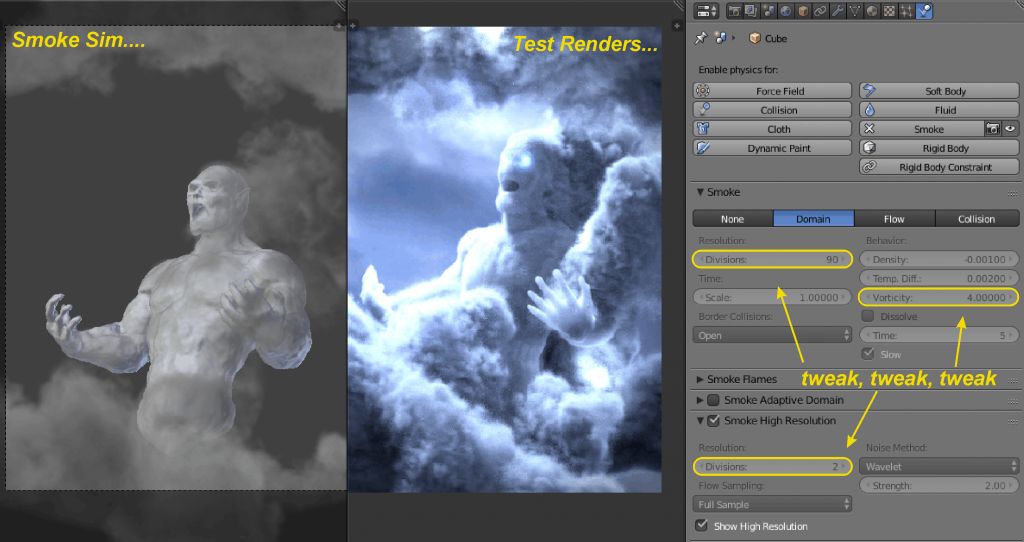 After a couple of renders I realized I needed a way to control the flow of the smoke. Smoke seems incredibly hard to control effectively, but luckily Blender has a complete set of tools for doing just that: Force-Fields!

I used mainly the "wind" Force-field to direct the smoke flow, and I used the "turbulence" force-field to create some variations in the clouds, because the simulation on its own looks pretty crappy, but the minute you add some disturbance to the simulation, the whole thing just seems to come alive. 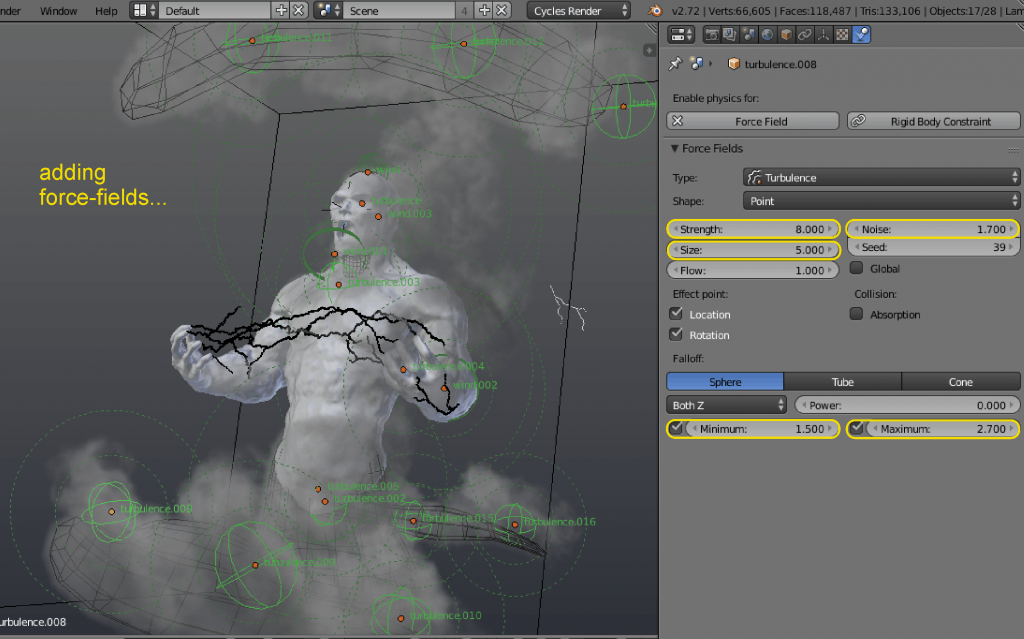 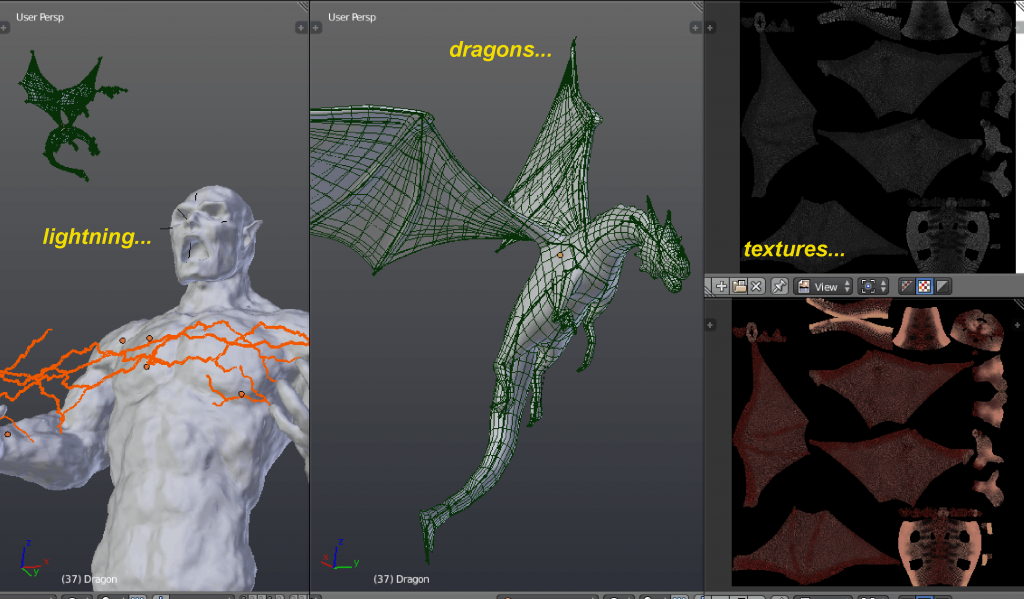 After that it was just a case of tweaking until I felt it was ready for the final render: 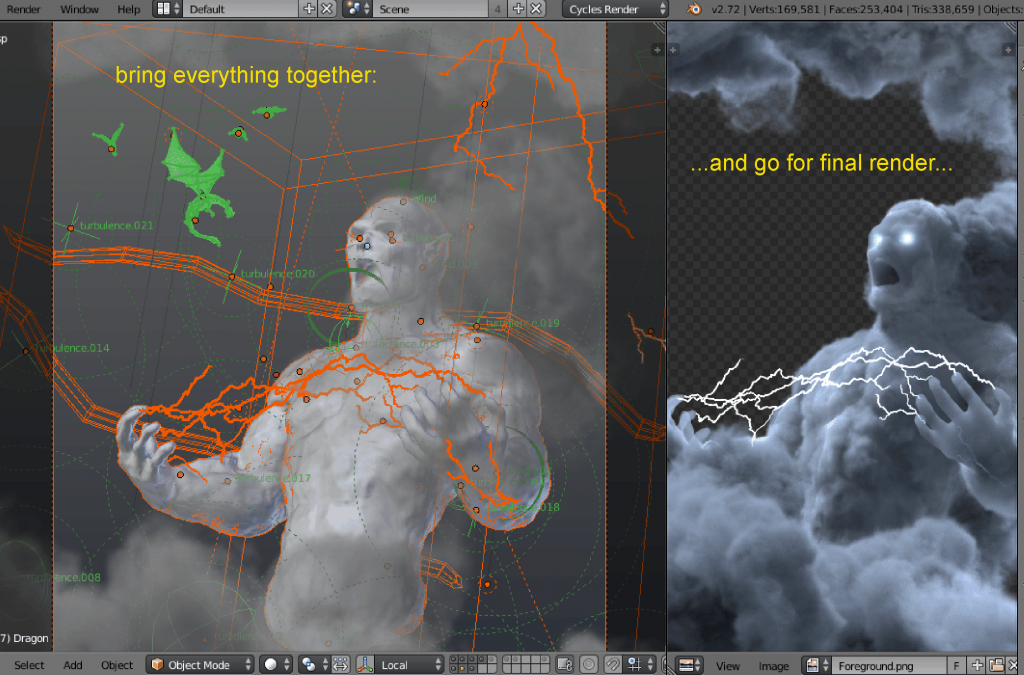 I rendered out everything in layers, and did some compositing with the node editor, and then I added some final touches in Photoshop. 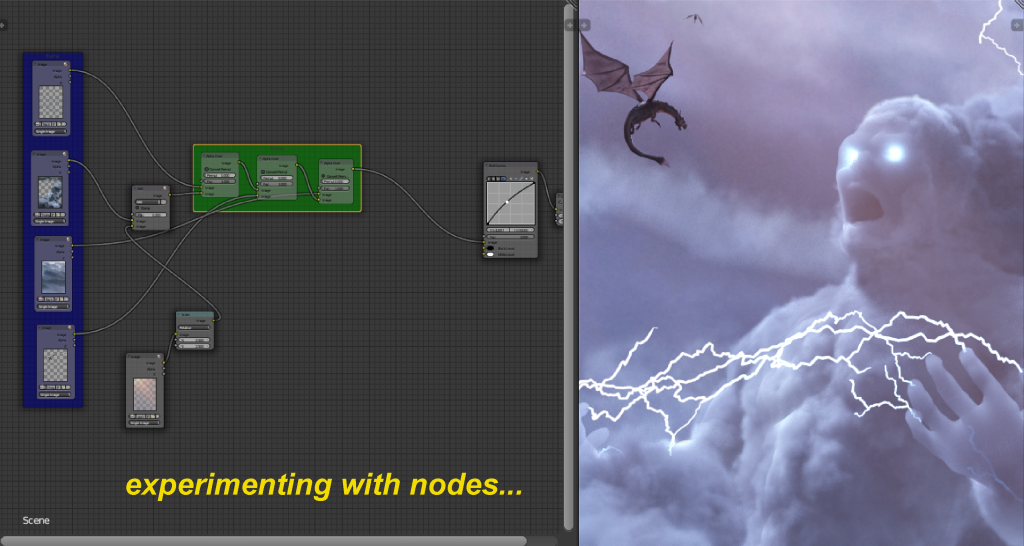 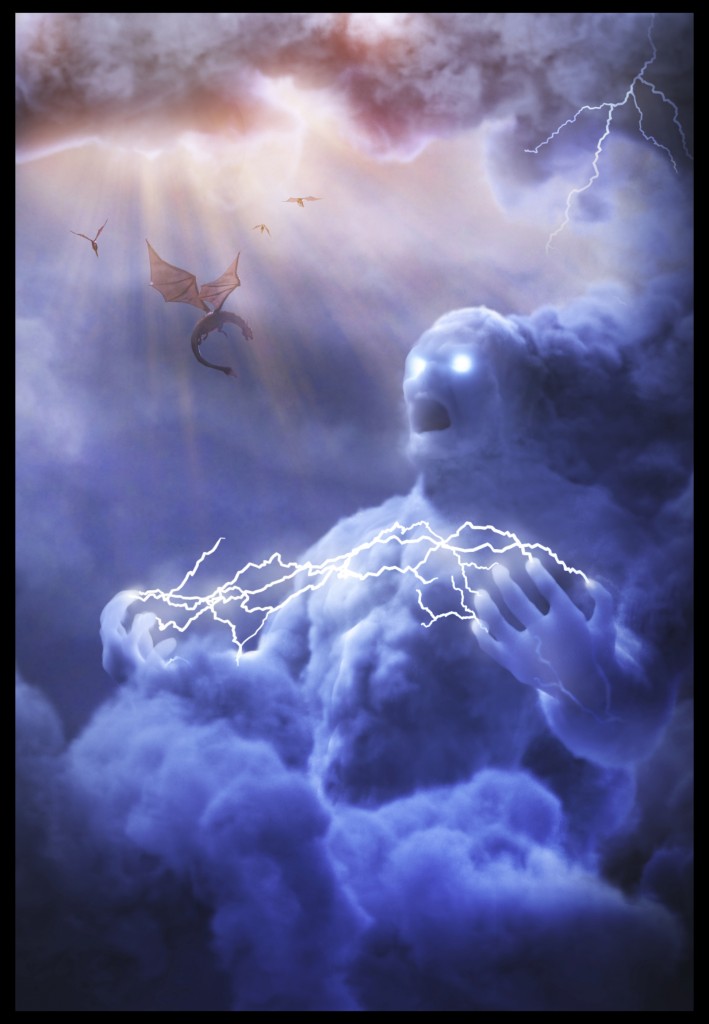 That's it. I hope you found something of interest, and if you're just starting out with Blender I hope you learned something. :) This has been a huge experience for me, and I'll certainly remember the lessons I've learned during this project. I'd like to thank the devs who work so hard to make Blender awesome, and I also want to thank you, the community, for your incredible feedback and support!

Be sure to check out Rico's blog. You can follow him on Google+. 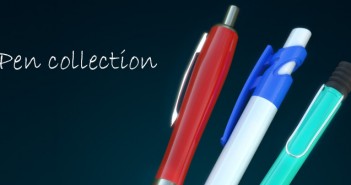 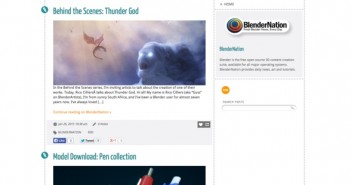 Next Article You can now follow BlenderNation on Tumblr, too