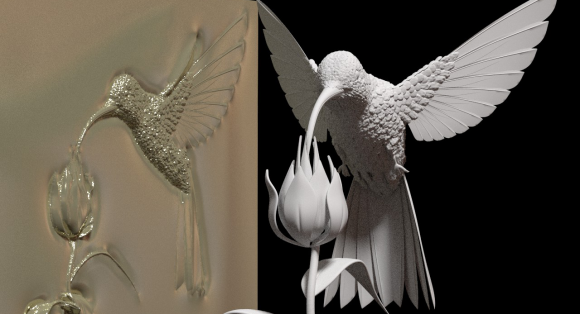 Are you into CNC milling? Vilem Novak presents a heavily updated version of his Blender CAM add-on that will allow you to export high-quality milling paths.

I put a lot of efforts into this algorithm to work well and it's a unique combination of this algorithm which cannot be found in any other software package, and also delivers better results than my old bas relief node patch for blender. It was optimized for good quality output. I recoded this algorithm from scratch in python, the only prerequisite is numpy, which is distributed with Blender CAM too.

The bas-relief add-on is donation-ware (the rest of Blender CAM is already open source), and it's up to you to decide the amount of your donation. Once Vilem has raised €2000, he will open source the script:

The bas-relief addon will be sent to all donors of Blender CAM as a bonus. Even if you donate a single euro(-cent), you are eligible to recieve a link to this addon. When the donations to BlenderCAM reach 2000 Euro since the moment of release of this addon(November 2013), the addon will be opensourced under the GPL license, and the documentation and tutorial published online. If the donations keep the rate which they had until now, this will happen approximately in 3.5 years :)

Previous ArticleHow to create a rope in Blender
Next Article Ray & Clovis! Reading is Magic – Part 2