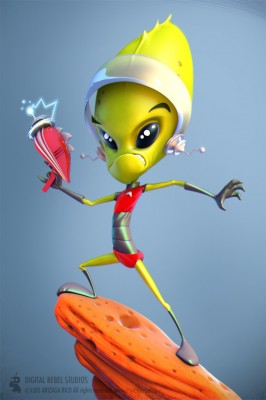 This lil alien is one of a 3d toon character series. Testing open software for CG cartoon. About the theme... I was listening star trek voyager where appears Captain Proton and the evil Caotica... I modeled the character with traditional polygon and box modeling techniques. Textures where painted with the 3d paint tools of Blender. I gave expresion and posed the character with the sculpt tools in Blender. Some composition in the Blender node editor and few small final touches in Gimp.