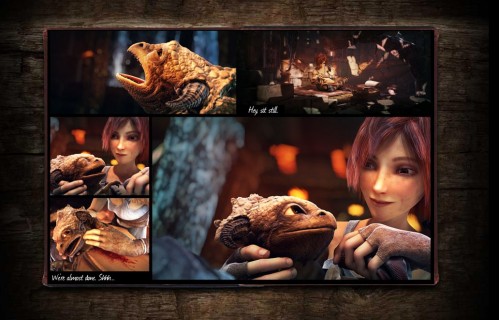 Joeri Kassenaar has created a comic book version of Sintel.

Some of you might know this: I'm a Philip K. Dick fan and a Ridley Scott fanatic, his attention to detail is overwhelming. And Dick's paranoid view on people is very impressive, being a cynical sarcast myself I can feel very much at home in his world. I got impressed with Dust-to-dust. Or at least the iTouch version by Boom. The comic itself is not available out here. Would it not be fun to make something like that? Then there is the iPad alice in wonderland. Have you seen that? I want that, but what to do? Create a book myself, write, draw, animate? In my spare time? And not watch my kids grow up?

On July 19th I went to the preview of Sintel. I knew it would be hard to get to premiere in my schedule and being a gold sponsor I thought I needed to show my face. Well, uhm. Always good to see Ton again. It was a nice view, but I thought it had some gaps. Being a Martin fan ( I have all his Storms, also the new ones ) I couldn't see his vision in this film. I had a drunk chat with Esther, who thought I was an ass, to find out I was dissing her story, and not Martins. My mistake.

The last time I was so troubled by a film was with "Dancer in the Dark" by Lars von Trier. I don't mind a movie not having a happy end, but I do mind a director putting tons of grief upon me without a solution to find relief. The we where not able to discuss the movie online, the premiere had yet to come.

Originally I wanted to fix the problems in the Sintel movie. So when I got the png sequence to author the video dvds I saw a chance to do so. It would also be nice to create content for a virtual book. But while working with the frames I noticed the story is not so bad after all. It's all there, the movie just needs to be 30 minutes for slow old people like me. A picture book than comes in handy.

Sintel seems to be in the middle of the shot a lot. I have no idea why. Maybe a lot of sky represents loneliness a bit better. But its not how I like to see a cg girl shot. Just google cg girls to see how most people frame a person. So I wanted to deal with that. Use the stage. I planned on 24 pages, but the movie is fully packed with action. And still I had to leave out way too much. My respect for the amount of work put into this piece really grew when making this comic. I did not find one flawed image in the whole movie ( except yeah some non masked hair and in single stepping some weird appearing dust etc. ) But overall the attention to detail is simply amazing and passes way too fast in the movie. The number of sets is impressive for such a short movie. The facial emotions are quite superb. Etc. etc.

Two copies where sent to a printer, but there went something wrong so I could alas not present a copy to Ton at the BConf. I guess santa will have a nice present for him this year.

This is a static version, and made a pdf that you can print if you like to. Any ideas on how to get the version interactive would be great. Maybe add Jan's music.

Anyway, I thought I might share the pages I made with other Sintel fans. Maybe Martins publisher wants to print it? lol.