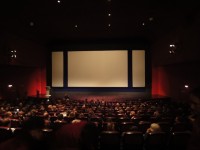 Last night I visited the Sintel premiere at the Dutch Film Festival in Utrecht. It was a superb epic experience!

After meeting the Durian team and a hand full of Blender users in the lobby the team left, planning to make a smashing entrance in a limousine. City centers of Dutch cities often have very narrow streets though, and as it turned out, the limo could't make the necessary turns ;-) So after a bit they arrived on foot.

The theater was booked solid. As it turned out, one ticket would get you into two movies so I can't be sure how many people came for Sintel exclusively. Still, it was a HUGE audience and that the event even better. Most of the team members, including Ton, were understandably nervous. Ton kicked off the event by explaining the unique background of the project and by spoiling the end of the movie (2000 names of community members who pre-ordered the DVD ;-).

Then the movie started. I'll tell you only a few things about it, and let you enjoy it on your own later this week. First of all, I completely forgot I was watching an animated movie after a few minutes. The story was THAT strong - it sucks you in, surprises, and moves you. I was fighting back tears at the end, and I still get goosebumps when I think of some of the scenes. Editing and the soundtrack were also both bold but modest, and especially the final song is beautiful. Sintel is going to turn quite a few heads. The only thing I don't like about it is that I can't show it to my 3 year old boy - some of the scenes are WAY too scary ;-)

After the movie ended we all moved to the 'Filmcafe' for champagne, snacks, and some more booze. From what I've heard the party went on for a long time after that.

The evening was great and I'm even more proud of Blender than I was before!

If all goes according to plan, Sintel will be released this Thursday. Stay tuned!