It's been busy for me lately so I had not been able to review much in the way of Blender tutorials and also there was not a lot left to review. So I was pleased to find out about a new video training tutorial release from Sebastian Koenig, this time on the topics of Shading and Fur application to his Mammoth model series created in his previous 3 tutorial videos.

This is the 4th video tutorial released by Sebastian and follows on from the previous tutorials listed below:

While you don't have to have seen the previous tutorials to understand the ones that come after it, it certainly helps, though Sebastian does explain most of the information you need to know at the beginning of each tutorial and goes over in brief some of the additions from earlier videos.

So with that in mind what can be said about the newest addition, here the product overview: 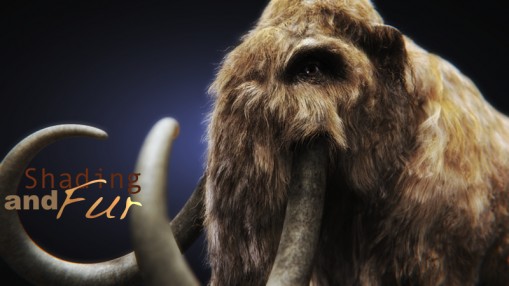 Since fur is often skipped over in training materials for Blender because of its fiddly nature and the fact that it can bring machines to their knees, it is good to see that Sebastian did not shy away from this sometimes difficult area to teach.

The tutorial starts by going over the initial material, lighting and scene setups that are used. This helps if you either haven't seen the previous videos or your memory is a bit foggy (mine was). Some may argue that this information was not needed and could have been time better used to explain fur topics, but others would argue the exact opposite.

A little more information on what a shadow buffered is and why altering the clip start and end values is a good thing to do could have helped for those that are not clear on what shadow buffers are, but this is not a beginners tutorial so it's to be expected. I also found it helpful that Sebastian explained that fur shadows do not work as expected with ray tracing and have to use shadow buffers, another useful bit of information to store away until needed.

After going over the shadow buffers the topic moves on to setting up the lighting in the scene, so as to get a well lighted model to show off the fur and shading better. Ambient occlusion usage is also covered and a few of the options that can be set for it are explained briefly.

The tutorial then moves on to a quick overview of the basic materials used on the mammoth model. A lot of this information was covered in previous tutorials but it still serves as a useful refresher (at least for me).
For the tusks on the mammoth Sebastian uses subsurface scattering and explains the SSS settings which again I found useful, especially what the Scale value stands for in relation to SSS.

At 22 minutes into the tutorial the primary topic of the tutorial is reached, that being adding fur to the mammoth. It may be frustrating to some having to wait a whole 22 minutes before you ever actually see any fur but the preceding information will probably make things easier for a lot of people.

Sebastian covers most of the major parameter controls for controlling how hair is generated and affected. He almost from the very beginning quickly explains how to use Parent and Child Strands to improve the appearance and performance of strand modeling, and later on in the video even covers the strand simplification controls, which I think is the first time I have seen that explained in a video tutorial, so to me that is excellent.

After covering the strand control parameters Sebastian goes on to explaining weight painting and vertex groups and how they are used to control how and where Strands are generated. The techniques described are used in the video to prevent fur from being emitted from the bottom of the feet and various places on the head of the mammoth, as well as to control the length and density of fur on parts of the mammoth, and use extensively in the rest of the tutorial.

At this point (35 mins) a test render is done with the current strand settings and Sebastian details how to speed up the render using the Strand Rendering option.

Once the render is completed Sebastian moves onto describing the Particle Mode and demonstrates how to alter the positions of strands using the various Particle Mode tools such as Comb and Add etc. He uses this mode to improve the position of the Strands in the render to make it look more fur like. A good demonstration of Point Select mode is given and Sebastian shows how to use the Strand Step value to make the strands more controllable.
At this point the video moves on to altering the materials and texture settings of the generated fur strands, things definitely take a more advanced turn at this point.

Most of the major parameters are explained, but in some places I found it a little difficult to keep up with some of the material and texture settings.

I would have found it useful to have had more information as to how and why the various material settings were used, especially in relation to how to use the Stencil mask type. As this Stencil mask type is referenced a lot and the description of why it was used was not very clear to me. It did seem to me that at some points it became a mass of button clicks with some things not really being explain clearly enough. I maybe need to go back and re-watch those bits. Other than that everything else was well explained.

The use of the color blend texture with fur was explained very well, though I think it should have been spelled out that it is used to make hair transparent at the end, to make it fade out and have a feathered and not sharp end. Though again this is not a beginners tutorial, so chances are we are assumed to know this.

Multiple Strand/Particle Systems are used and layered together and Sebastian takes some time to explain how they combine together to produce the final fur output.

A nice feature of the tutorial is that Sebastian takes the time to explain how to make various types of Strands such as ponytail strands and braids, very handy. Also covered were using various clumping settings to make the mammoth fur look matted and clumped. If nothing else the information on the Kink and Branch settings will be worth knowing as it is very, very useful.

So all in all this is another excellent video tutorial from Sebastian, as mentioned above the only thing I found confusing was the use of Mask/Stencil textures to add variation to hair colors, but that is likely to be my fault not Sebastian's.
Review Score 85%