If you can recall a previous article, the Blender Game Engine is currently undergoing huge developments led by Entertainment Arts Research. Here's a 'brief' update of some of the new things we're seeing appearing currently, plus a more recent demonstration video of Yo Frankie.

First off Ben2610 has finished approximately 5 rounds of BGE optimizations, bringing huge speedups to the engine, with more optimizations to come. So far the Scenegraph, Rasterizer and Logic have all been optimized and Modifier support has been added. See this thread for the discussion and links to more details on each individual optimization. Of course we now also have these updates, which includes occlusion culling and view frustrum culling (with manual setup) plus loads of other smaller things and a good bunch of bug fixes (listed at the bottom of the page).

Here's a list of threads on BA demonstrating some more new stuff:

There's also a couple of new sensors: a advanced collision sensor and a 'Tap' sensor (see the quote below)

"You guys should also be getting excited about the new "Tap" sensor option which makes it easy to do jump logic with just 2 sensors and an actuator, no properties, states, python which were needed before."

And finally there has been a '2.49 demo pack' call for content, to replace the older graphics and physics demo available for download on the Blender.org download page. So if you have anything cool which demonstrates new features be sure to submit them to this thread.

MatrixNAN writes about some of the things we can expect to see happening soon:

"Next up this month after the logic speed up from Benoit is the Rasterizer. Yeah we know about the problems with the rasterizer and its several areas about 10 or so that need to be optimized with regards to the rasterizer some of them have to do with Blender itself and not even the game engine. The lighting needs more work for the BGE and I think some optimizations with regards to the lighting will be needed.

Benoit will be implementing the LOD system this month so don't worry about the LOD system. We have done a lot of planning with the LOD system and its a very good one. Also Campbell is finishing up the Path Finding logic system and its very very cool. Jason Fu has the Iterative Mapping working also. Mike Pan is working on the Real SSS Skin Shading in Real Time it looks very very good. We have been looking through the managed shader system and we are starting to implement some of the features. Don't know how many features we will implement but we will do as many as we can I think. The white box is coming along more and more and big thanks for all of the help from the community on the white box template.

As far as the Physics are concerned thats very welcomed. The Physics is something that we have not been working on so any improvements to that or integrating Bullet further into Blender would be very welcomed. We have also contracted Benoit out to do the Multi-Threading so you can expect that in 3 months from the end of this month. Campbell will be implementing the DXT5 after the path finding system is done. "

Recently posted on the Yo Frankie site is a new video: (note that this is not using 2.49, yet)

"Here's a new run-through of the game in the Blender game engine, this time with the music playing in the game, 4x antialiasing, and a decent frame rate. There's also a multiplayer demo at the end. ENABLE HQ after pressing play. 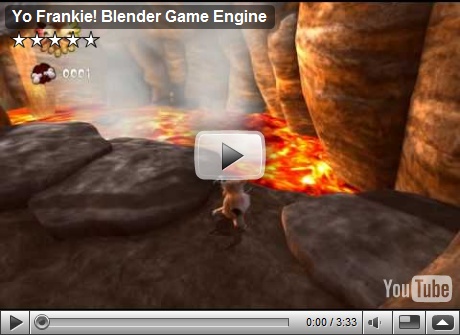